It's fun to open and shut the phone, though navigating the bigger screen takes some getting used to.

Samsung is gearing up to launch its long-teased foldable flagship and after months of hype, we're finally getting a chance to actually touch the Galaxy Fold. If you're interested in dropping the cool two grand that Samsung is asking for the Fold come April 26th, you're probably wondering what it looks like and whether it's worth the money. Well, at first glance, I can tell you that it definitely has a crease and seems quite sturdy.

I'm surprised at how finished the Fold felt. It's sturdy, and it was actually really satisfying to snap the phone shut so the 7.3-inch screen folds onto itself. That large foldable panel has a 4.2:3 aspect ratio, with a QXGA+ resolution (1,536 x 2,152) and is made from an "advanced composite polymer," which is a sturdier type of plastic.

Prying the phone apart though, is tougher, and generally requires both your hands. The hinge locks into place when you completely open the screens and snap it flat. The two sides of the Fold snap shut magnetically, and when closed the device is much easier to maneuver with one hand. On the outside, the phone has a 4.6-inch screen with an 840 x 1,960 resolution that's definitely a lot less sharp than I'm used to. Because of its diminutive size, the outside screen was also harder to navigate -- I kept pressing the wrong buttons when trying to switch lenses in the camera app. From my experience so far, I don't feel like you're meant to spend a lot of time using this smaller screen. 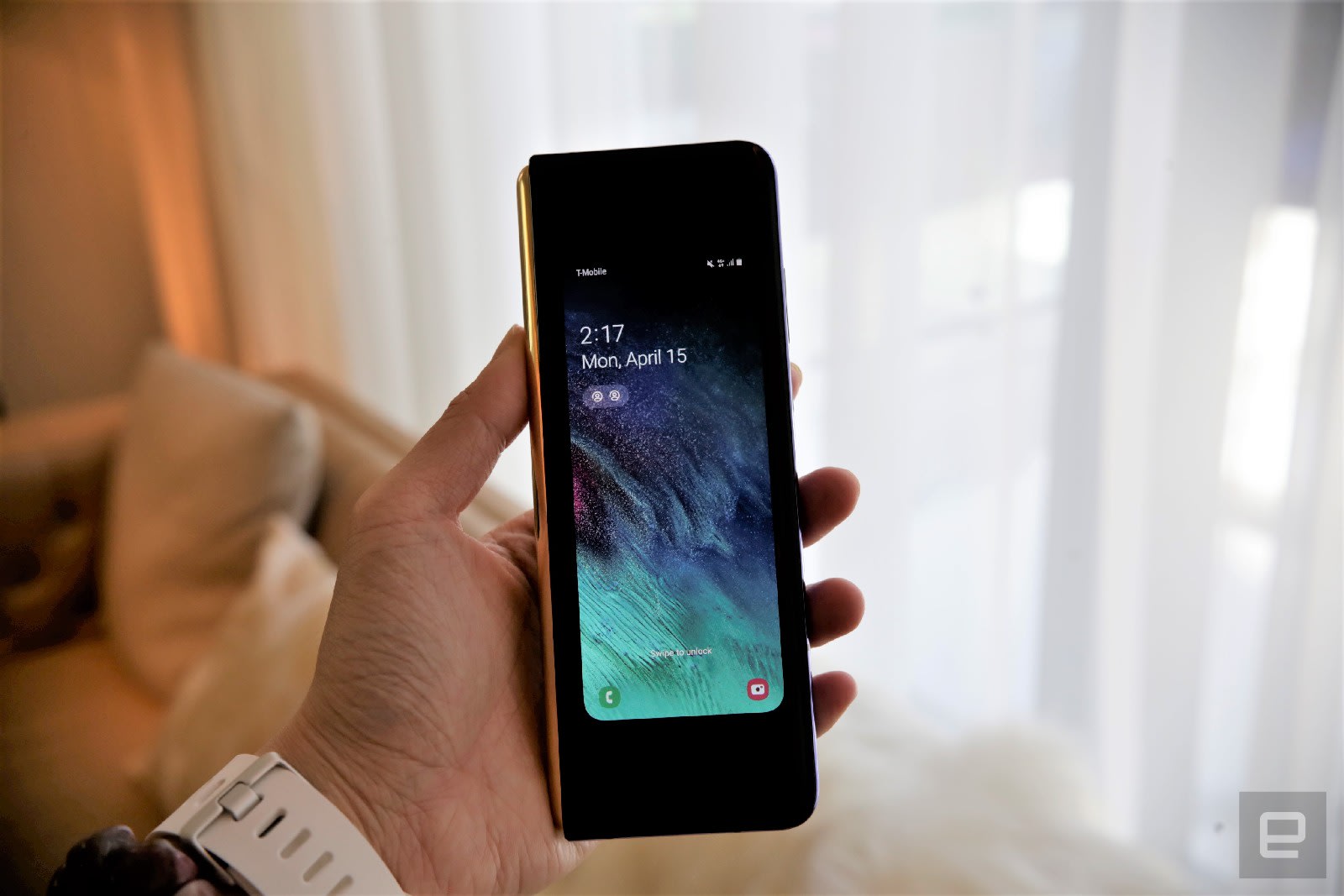 After spending more time with the Fold, I was pleasantly surprised that, with some finesse, I could actually open and shut it with just one hand. It took some practice, but felt basically like what I did with my Motorola Razr back in the day. There's no real practical use to mastering this move, I expect it'll just become a sort of habit that distracts people, kind of like a fidget spinner.

The more important questions I wanted to answer were whether that screen does indeed have a crease and how much it would bother me. Like I said before, yes there is a crease running down the middle of the unfolded display, but depending on what you're looking at, it's not obtrusive. It's just like a crease you'd get if you folded a piece of paper then opened it -- you'd still easily be able to see what you're reading, but just be annoyed at the visual imperfection.

In my brief testing, I found that things like a dark wallpaper or a dimly lit set in a movie weren't marred by the crease. It was more obvious in things like brighter scenes, photos I took or articles I was reading. Again, it wasn't a dealbreaker, though it is the sort of thing that would annoy a perfectionist, especially after paying such a high price for it. 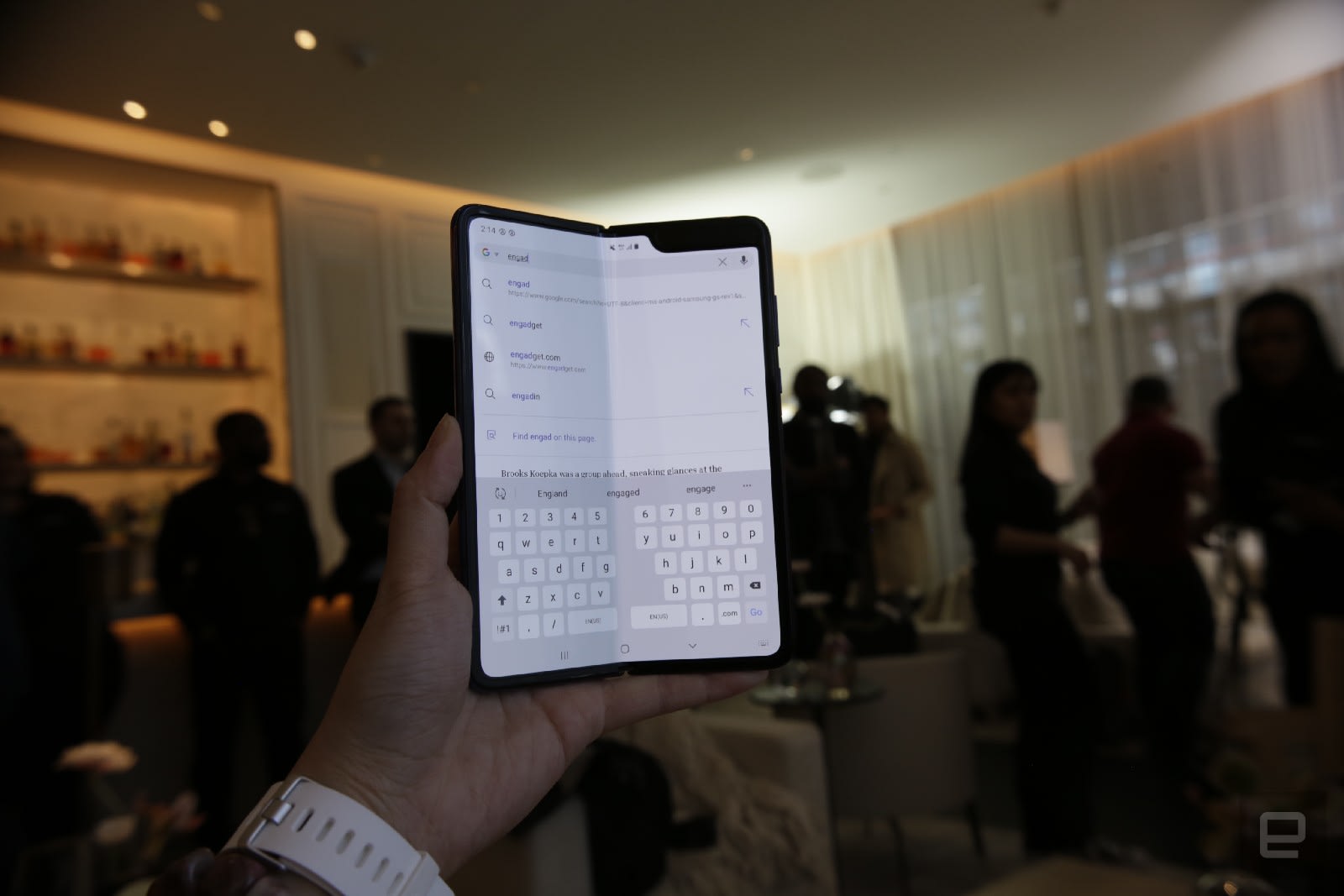 I did like some of the software touches here that make the Fold's bigger screen more useful. When you're using an app like Google Maps or YouTube on the outside screen, open up the phone and the app automatically expands to take up that larger inner display. This is particularly useful for seeing more directions in Maps, but the big canvas also offers extra room for multitasking. You can launch up to three apps at the same time on the 7.3-inch display, and by default the keyboard layout is split down the middle so you don't have to stretch your thumbs to reach the keys in the middle.

The Fold should be able to easily handle running three apps simultaneously since it has a powerful Snapdragon 855 processor and 12GB of RAM. During my hands-on, I didn't notice any lag while jumping between apps, switching screens and flipping cameras. I'm sure though, that there will be some lag if you're trying to run three games at the same time, but we'll need to test this phone out in the real world to see how it holds up.

Another thing I wasn't able to get a sense for was battery life. The Fold uses two battery cells that add up to a total of 4,380mAh, which is larger than 4,000mAh pack that powers the Galaxy S10+. Though, considering the Fold is basically a phone and a tablet in one, I'm skeptical that it can last all day. 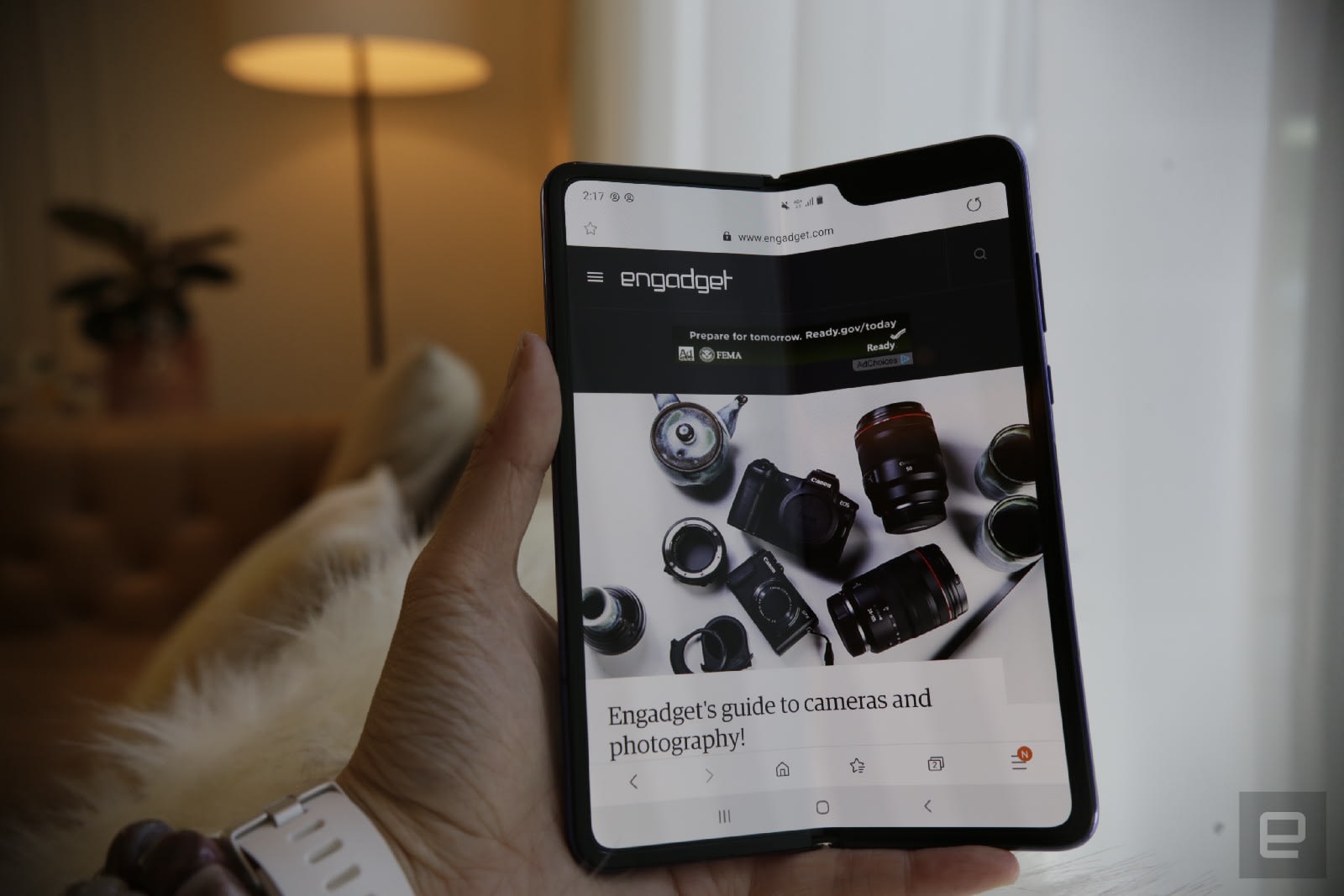 To help protect your Fold, Samsung is including two phone cases (made from a Kevlar-like material) that snap on to the outside and don't obstruct the hinge. The company is also throwing in a pair of Galaxy Buds with every Galaxy Fold, which makes the $2,000 price slightly easier to swallow. But from what I've seen so far, the Fold isn't a phone meant for the average consumer, or even the wealthier consumer more willing to pay a premium for advanced features. It's more a well-rounded proof of concept that shows Samsung can still surprise us, and will likely only appeal to the thirstiest of fans.

Update: A previous version of this article stated that the Galaxy Fold packs 6GB of RAM -- it actually has 12GB. The post has been updated to correct the error.

All products recommended by Engadget are selected by our editorial team, independent of our parent company. Some of our stories include affiliate links. If you buy something through one of these links, we may earn an affiliate commission. All prices are correct at the time of publishing.
View All Comments
Samsung Galaxy Fold hands-on: Satisfying despite the crease