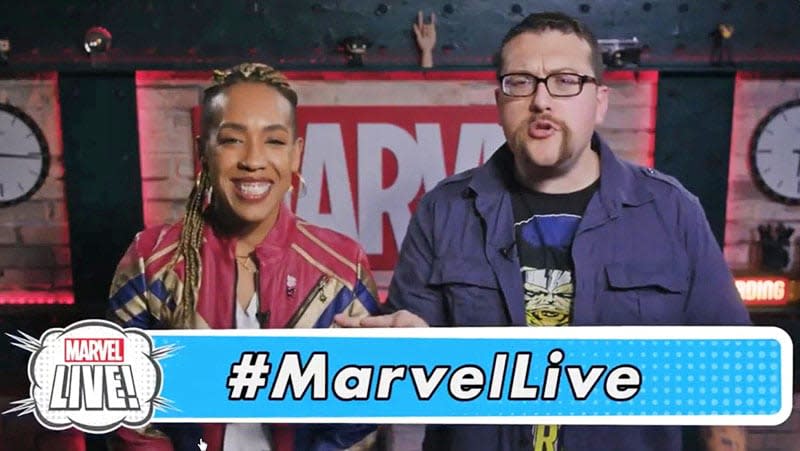 Marvel is debuting a weekly Twitter streaming show on Thursday that will include guests and ample discussion about the Marvel universe. Marvel Live! will be hosted by Ryan Penagos, Marvel's Vice President of New Media, and Angélique Roché, who hosts the Marvel Voices podcast. Fans can expect plenty of "guests, news, reveals, and exclusive secrets" from the show, according to a teaser trailer.

BREAKING NEWS! We have a new LIVE show coming to you weekly right here on Twitter starting April 18th at 4pm ET. Hosted by @AgentM and @AngeliqueRoche, we're giving you an inside look at the Marvel Universe! Join the conversation every episode with #MarvelLIVE. pic.twitter.com/Inaap5nbxH

Each episode of Marvel Live! will feature a breaking news segment and live guest. The first episode, which debuts on April 18th, will feature actor and author John Hodgman, who is currently playing Dr. Agent Hobbes in Amazon's superhero comedy The Tick. Comic book artist Adam Kubert, known for his work in Captain America and Peter Parker: The Spectacular Spider-Man comic book series, will also show off his drawing skills.

Fans can catch Marvel Live! by following @marvel on Twitter and tuning in on April 18th at 4 pm ET. The show's hosts will also be taking questions, which you can submit under the #MarvelLive hashtag.

In this article: entertainment, internet, john hodgman, Marvel Live, twitter
All products recommended by Engadget are selected by our editorial team, independent of our parent company. Some of our stories include affiliate links. If you buy something through one of these links, we may earn an affiliate commission.