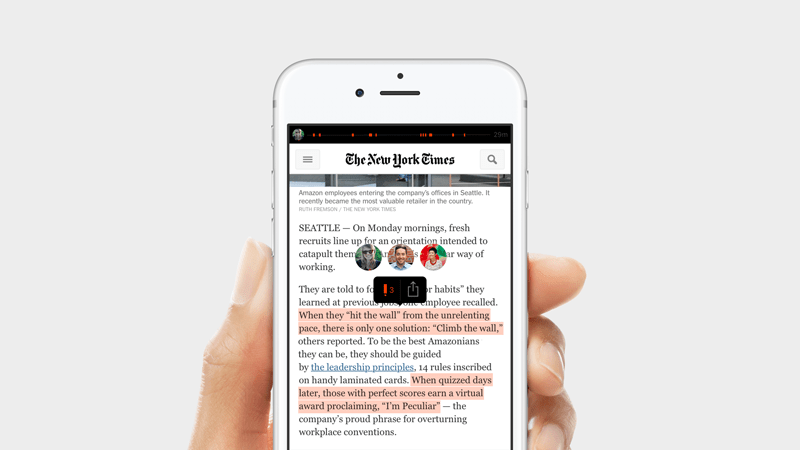 Twitter has acquired the highlight-sharing app Highly. Highly CEO Andrew Courter announced the acquisition in a Medium post on Wednesday, but didn't detail what Highly's role at Twitter would look like. Twitter confirmed to TechCrunch that the deal was an acquihire, meaning Twitter is buying Highly primary for its staff, not the service itself. While it's unclear what exactly Twitter plans to do with Highly, it will no doubt play a part in the platform's wider goal of improving its conversation features.

Highly, which comes as both a browser plug-in and iOS app, lets users highlight entire quotes from articles and share with friends through email, social media, Slack and text. Users can also access an archive of quotes they've shared over time. In light of the acquisition, Highly will shut down its Slack and iOS app on April 26th, but promises it will retain all reader highlights. The Highly browser plug-ins, which are available on Chrome, Safari and Firefox, appear to be safe for now. Highly's paid products, Crowd Control and Highly for Teams, will now be free.

"Sharing highlights, not headlines — sharing thinking instead of lazily linking — helps spark the kind of conversation that leaves participants and observers alike a bit better off than they started. We'd like to see more of this" the Highly team wrote.

Sharing screenshots from news articles on Twitter is nothing new -- journalists do it all the time. Social media is already saturated with headlines, so sometimes sharing a juicy passage or a telling quote from a story gives people more incentive to click. Sharing quotes also forces people to read the story beyond the headline. Twitter buying Highly is a sign that the platform could integrate the practice into its native app, making it even more widespread.

In this article: design, entertainment, highly, internet, twitter
All products recommended by Engadget are selected by our editorial team, independent of our parent company. Some of our stories include affiliate links. If you buy something through one of these links, we may earn an affiliate commission.