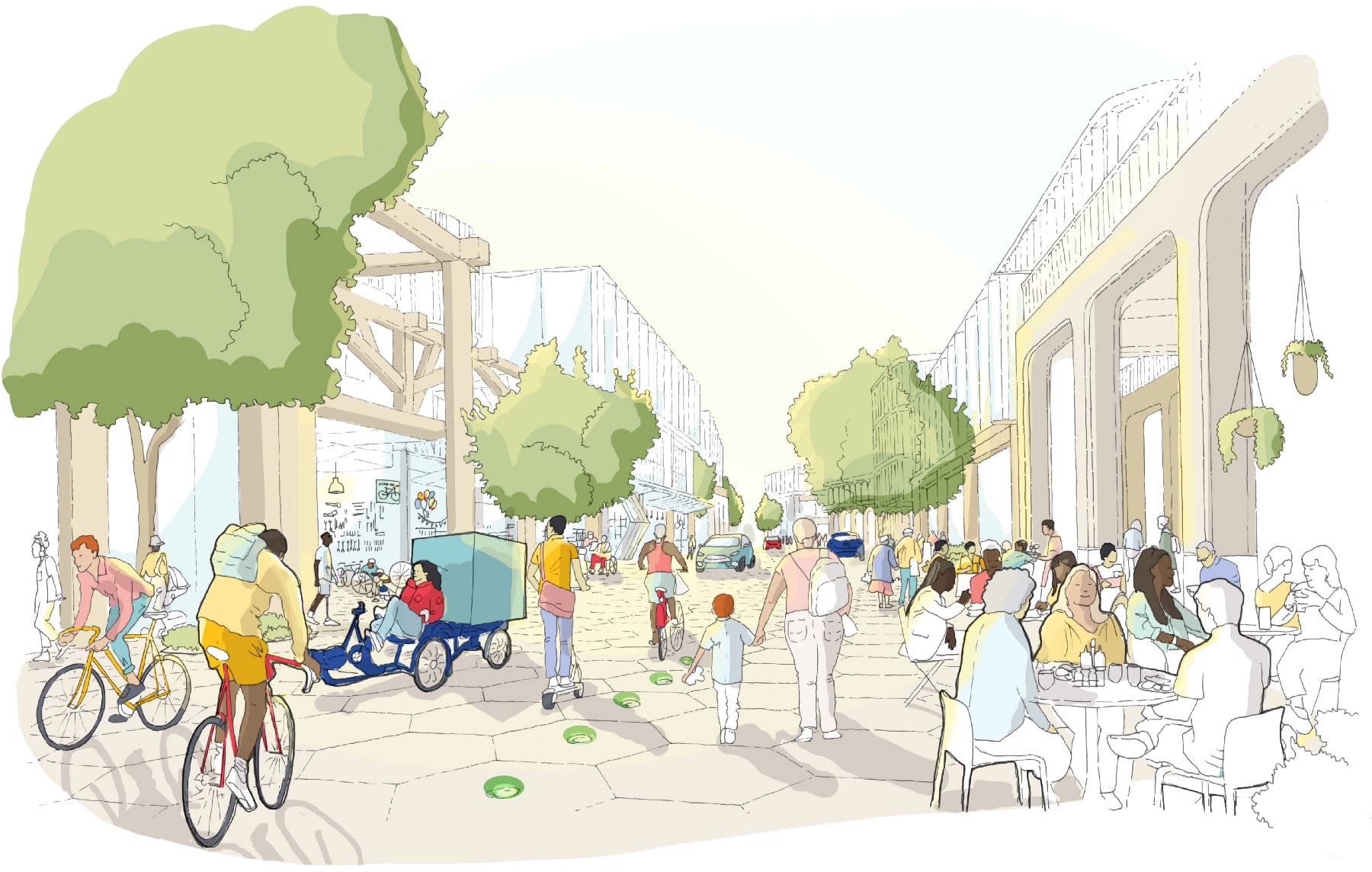 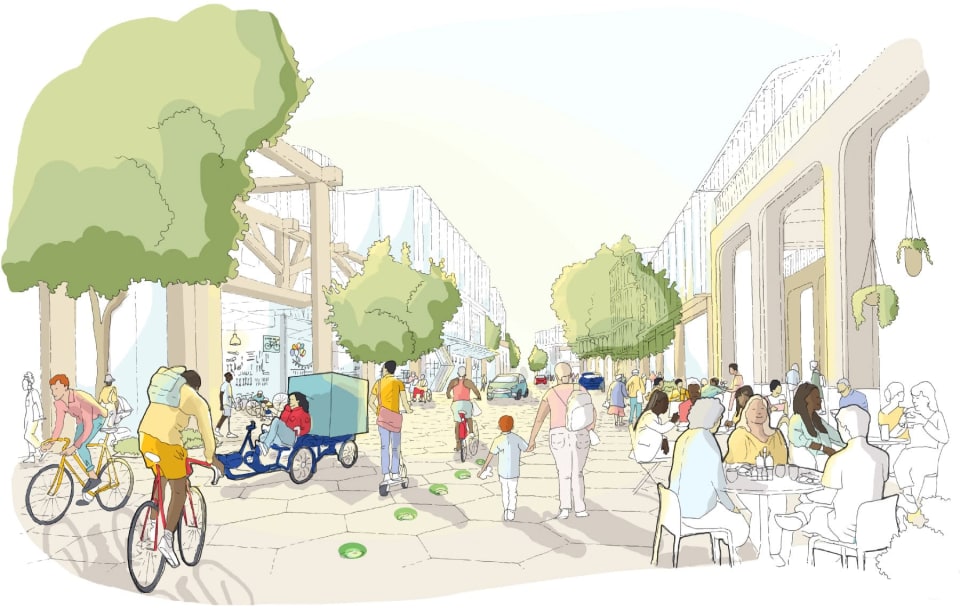 Too many cities are built around cars rather than people. Sidewalk Labs, an offshoot of Google's parent company Alphabet, wants its smart neighborhood in Toronto to be different. It's considering a so-called superblock concept, modeled after Barcelona's, that bundles smaller streets together and limits vehicles to the perimeter. The smaller lanes inside each superblock would then become safer, quieter spaces for pedestrians and cyclists. Sidewalk Labs wants to go a step further, though, with real-time traffic monitoring and movable street furniture. These would allow the company to create smart, dynamic superblocks that subtly change with the time of day and needs of its residents.

In a new report, Sidewalk Labs pitches four basic road types for Quayside. The widest and busiest, called Boulevards, would allow traditional cars with a driver behind the wheel. These would be limited to the outside of each superblock, however, while a network of smaller Laneways, Accessways and Transitways crisscross inside. Sidewalk Labs also wants to track and predict usage with a combination of low-cost sensors and machine learning algorithms. It would then use this information to alter the structure of each Boulevard and the vehicles that are allowed to move through them. 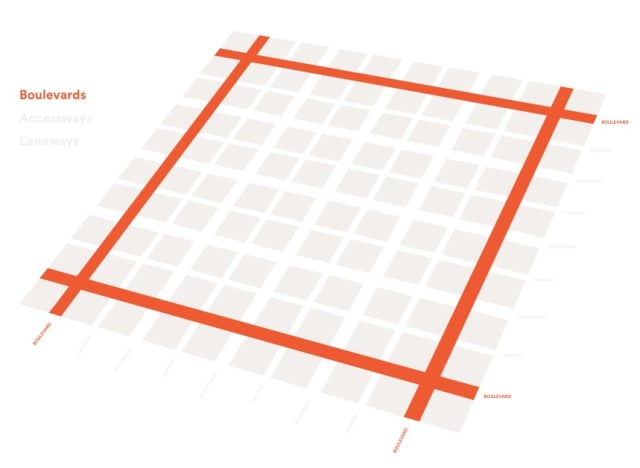 The company has shown off its modular pavement system before. These hexagonal pads have embedded lights that can change color to visualize lanes or pedestrian-only sidewalks. The company says it would use these Dynamic Curbs to prioritize transit during rush hour and carve out relaxing public spaces at off-peak times and during national holidays. Some parts of the boulevard would be fixed -- you can't dig up a tram line, for instance -- but most would be reconfigurable.

Connected and autonomous vehicles (CAVs) would, crucially, be allowed on the smaller streets inside each superblock. The top speed of these machines, which could include pods, e-bikes and electric scooters, would be software-limited and change depending on the street type they're on. On a super-narrow Laneway, for instance, they could only travel at up to 4MPH (8KMH), but on a wider Transitway they might reach 25MPH (40KMH). CAVs would be programmed to take the fastest route to your preferred destination. Navigation software would, therefore, push them toward the faster Boulevards and keep the inside of each superblock open for pedestrians. 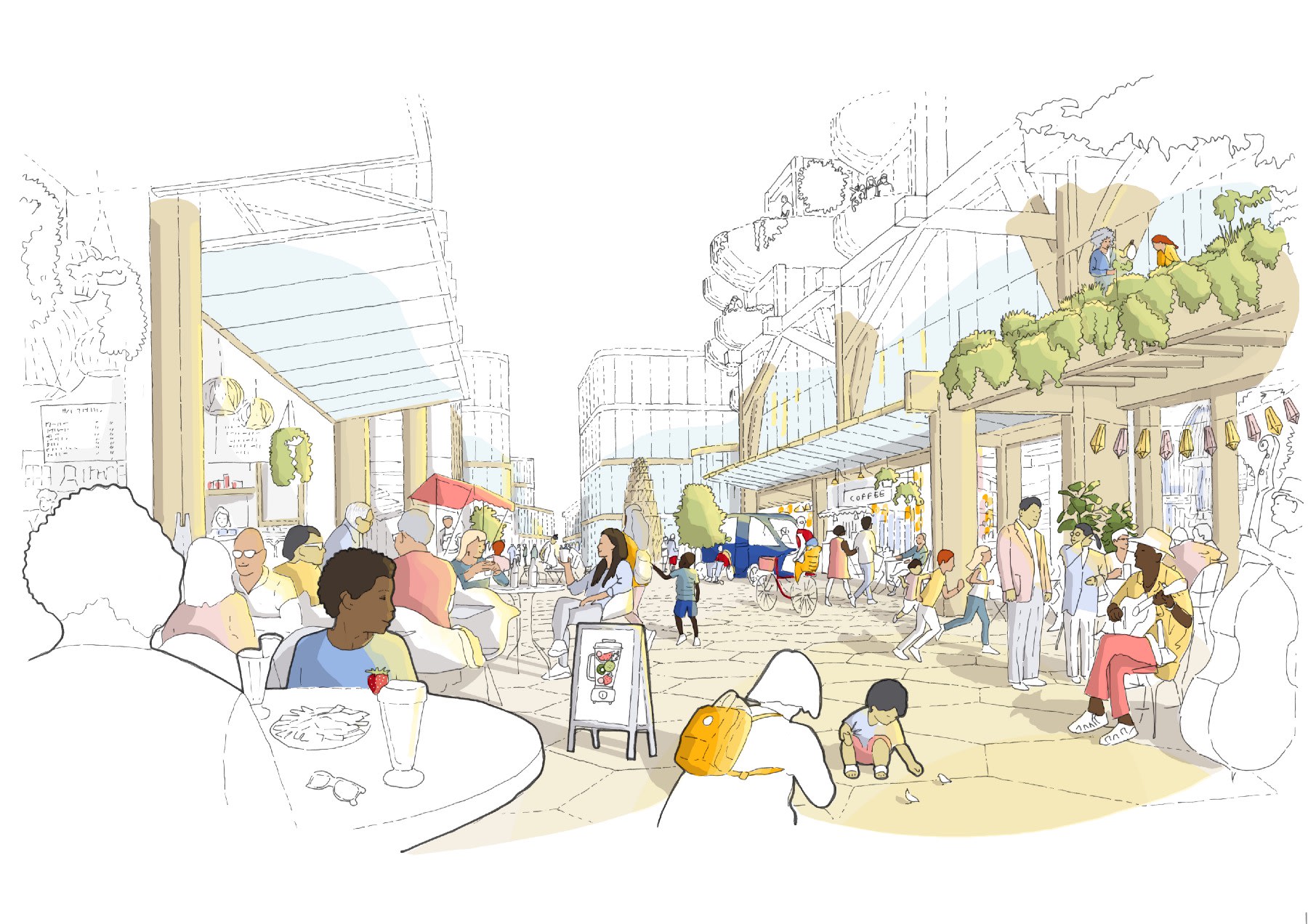 Sidewalk says CAVs could be hard-coded to stay inside vehicles or bike lanes. On the flip side, these geo-restrictions could be lifted when it's deemed safe or necessary to make traffic flow efficiently through Quayside. In short, the district would have a basic superblock structure similar to Barcelona's. But the rules and physical makeup of each street could be tweaked to maximize throughput or the health and happiness of Torontonians.

"Our hope is that, as cities enter the 2020s, that old question of whom streets are for will be resolved," Willa Ng, mobility lead for Sidewalk Labs, wrote in a blog post today. "The street will once again be a place to stroll, play, and get around safely  --  for everyone."

The Alphabet subsidiary will test its ideas with a range of real-world prototypes over the coming year. For now, though, the superblock concept is still theoretical, just like the rest of Quayside. Sidewalk Labs won the right to develop a Master Innovation and Development Plan (MIDP) in late 2017. That document, which still hasn't been published, will need to be evaluated and, ultimately, approved by a range of parties including Waterfront Toronto -- a publicly funded organization -- the Canadian government and, of course, the public. There's no guarantee that any of these parties will say yes, either. Sidewalk Labs has faced a wealth of opposition from resident groups such as #BlockSidewalk who fear the project will only benefit Silicon Valley.

In this article: Alphabet, google, Quayside, security, Sidewalk Labs, Smart City, tomorrow, Toronto, transportation
All products recommended by Engadget are selected by our editorial team, independent of our parent company. Some of our stories include affiliate links. If you buy something through one of these links, we may earn an affiliate commission.