The app is also being updated new Groups and Events tabs.

Facebook is introducing a feature called "Meet New Friends" at F8 2019, its annual developers conference. The company says that Meet New Friends is designed to help users start friendships with others from their shared communities on Facebook, such as the city you live in, the school you go/went to or the place you work at. Since this may raise privacy concerns, which is the last thing the company needs right now, Facebook is quick to point out that Meet New Friends is an opt-in tool. That means you'll only come across other people who have turned the feature on, and the same goes for you populating on someone else's feed.

Facebook says it has begun testing Meet New Friends in a few undisclosed spaces, and is planning a wide rollout "soon." Later on, there' going to be an integration with Groups that will let you meet people from the online communities you're a part of on Facebook.

In addition to that, Facebook has also it overhauled its core app to put Groups front and center. A redesigned Groups tab will show you a personalized feed of all the activity happening across the communities you're in, while a new discovery tool will recommend Groups you might be interested in -- including in Marketplace, Gaming, Watch and other parts of Facebook. 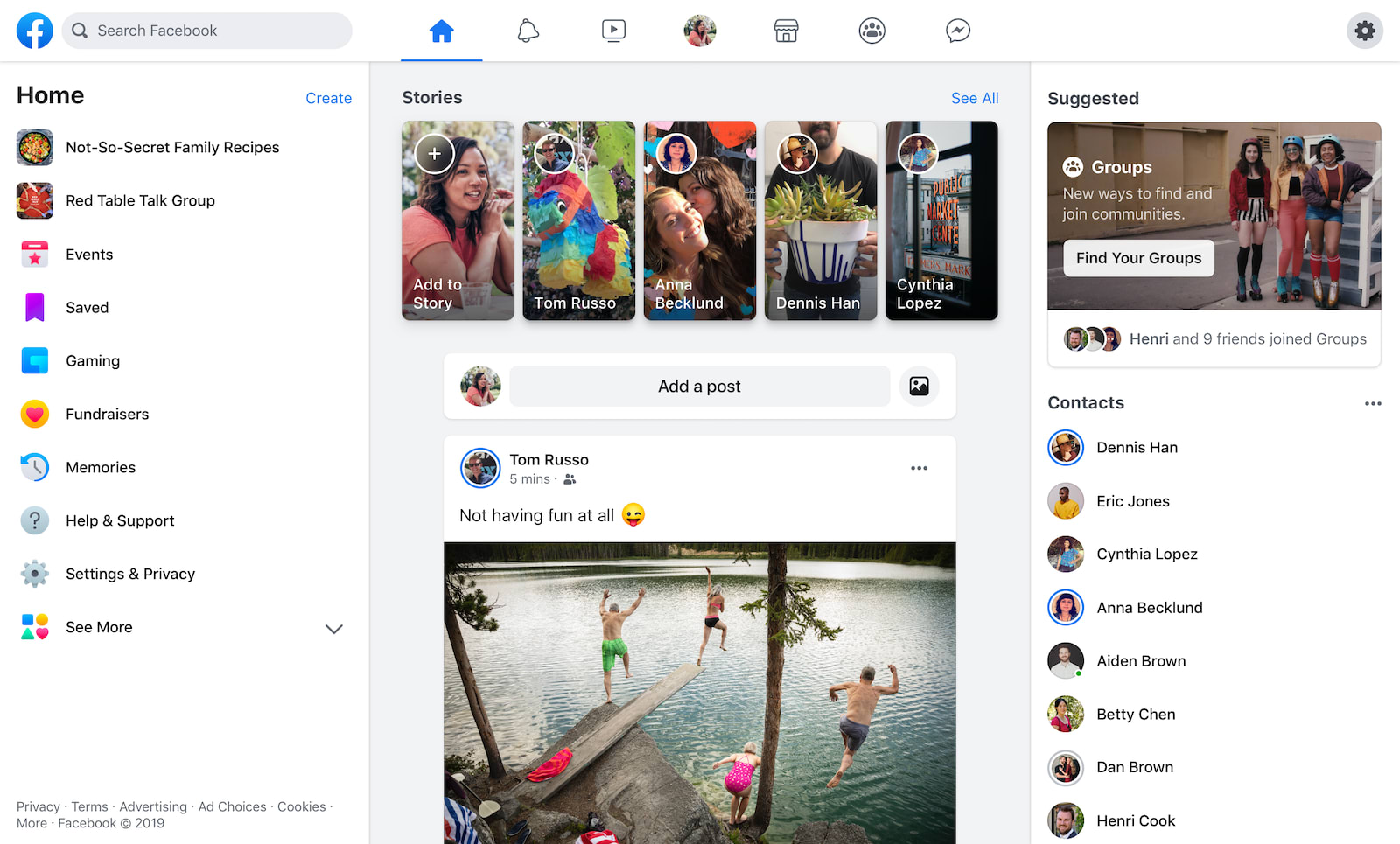 Turn on browser notifications to receive breaking news alerts from Engadget
You can disable notifications at any time in your settings menu.
Not now
Redesigned Facebook website.

Additionally, it'll now be easier to share content from your News Feed directly to Groups, the same way to you can with friends and family. And, since Facebook says over 400 million users rely on Groups, it wants to give them a safe platform for when they need support. With the new Health Support Groups feature, for instance, members can ask admins to post questions for them on sensitive topics if they want to protect their privacy. At the same time, job groups are getting tools like new templates for employers to post openings, and gaming groups a chat feature that will allow members to easily create threads on topics they feel strongly about.

Facebook says plenty of users are using Live video-streaming to sell items in Groups, too, so it has begun experimenting with ways to let buyers ask questions to the seller and place orders in real time -- all during a broadcast. Lastly, there's a fresh Events tab that makes it easier for users to find what's happening around them, get recommendations and discover local businesses. You can use it to help you coordinate with friends to make plans to attend events posted on Facebook, as well.

All these features are launching on the Facebook mobile app first, although the company said they'll be available on a redesigned desktop site that's coming in the next few months. The new mobile app, for its part, starts rolling out today. And as Facebook CEO Mark Zuckerberg said on stage at F8, "The app isn't even blue anymore."

All products recommended by Engadget are selected by our editorial team, independent of our parent company. Some of our stories include affiliate links. If you buy something through one of these links, we may earn an affiliate commission. All prices are correct at the time of publishing.
View All Comments
Facebook helps you grow your social circle with ‘Meet New Friends’
entertainment
events
f8
f82019
facebook
facebook events
facebook groups
gear
groups
internet
meet new friends
mobile
personal computing
personalcomputing
services
social
social media