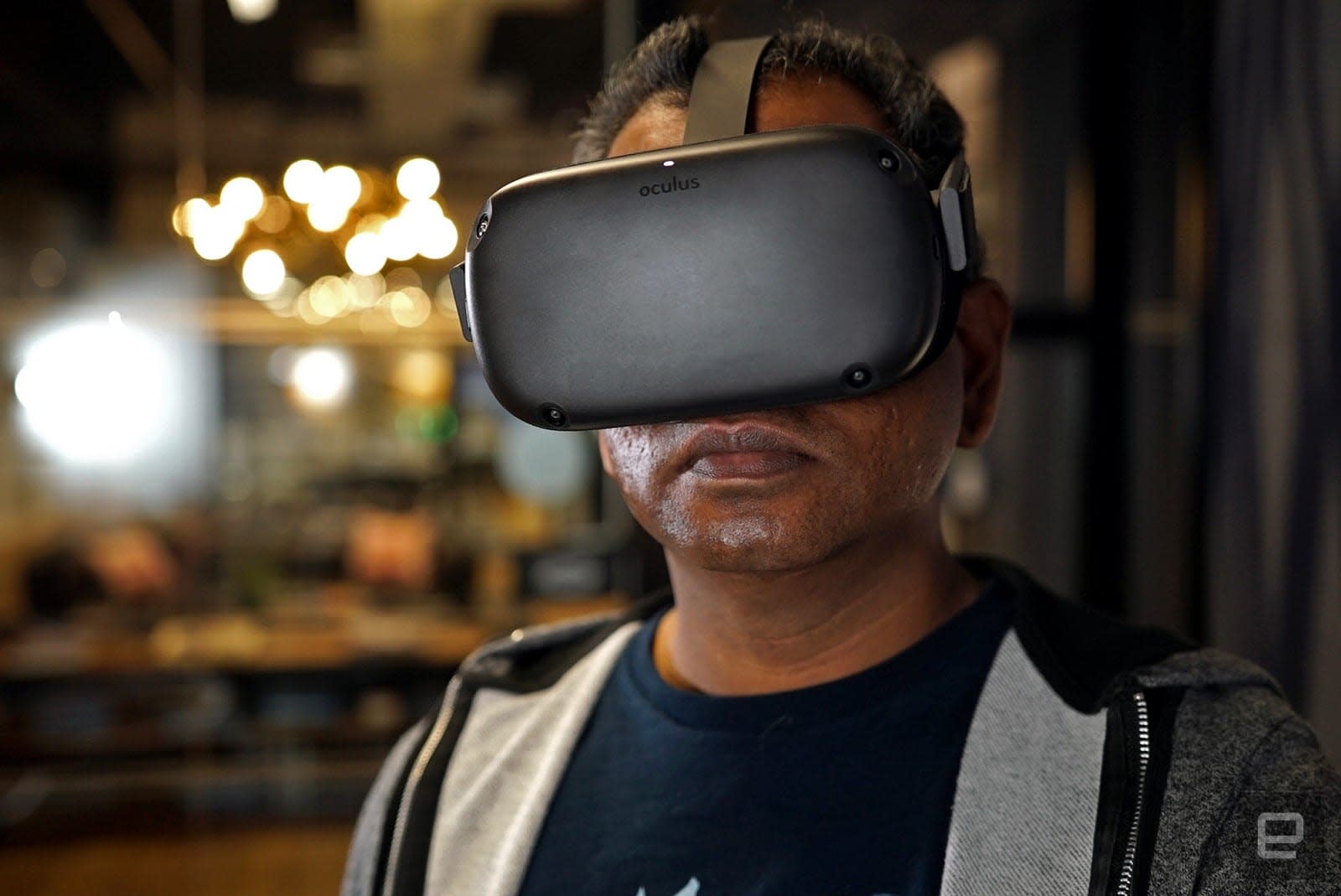 It's the best standalone wireless VR headset yet.

If the Oculus Go was an appetizer for truly wireless VR, which is entirely self-contained and doesn't rely on a PC, the Quest is closer to a main course. It's not as immersive as desktop virtual reality, but it's currently the easiest way to show off the potential of this new medium. You don't have to set up any sensors -- just throw on the headset, pick up the motion controllers, and you can jump into a complex virtual world anywhere.

You can think of the $399 Oculus Quest as a massively upgraded version of the Go. It's powered by 4GB of RAM and the Snapdragon 835, a two-year old processor that's far beefier than the meager 821 the Go used. Its OLED lenses each have a 1,440 by 1,600 resolution -- sharper than the Go's fast-switching LCD. Most importantly, it supports Oculus' Insight system, which relies on four sensors on the headset to keep track of your room and controllers. That's even better than the Oculus Rift, which requires setting up external sensors for room-scale tracking. In VR-speak, the Quest offers six degrees of freedom, since it can track movement in every direction.

Unlike the Go, you're not stuck with a single remote: The Quest comes with Oculus' revamped motion controllers, which have triggers, grip buttons, analog sticks and two face buttons. They'll let you play the same sorts of games that desktop VR headsets like the Rift can (in fact, the new Rift S comes with the same controllers). They're a bit smaller than the original versions, which I genuinely loved, and they have tracking rings above your fingers, instead of below. Oculus tells us this helps the Quest keep a better eye on the controllers. 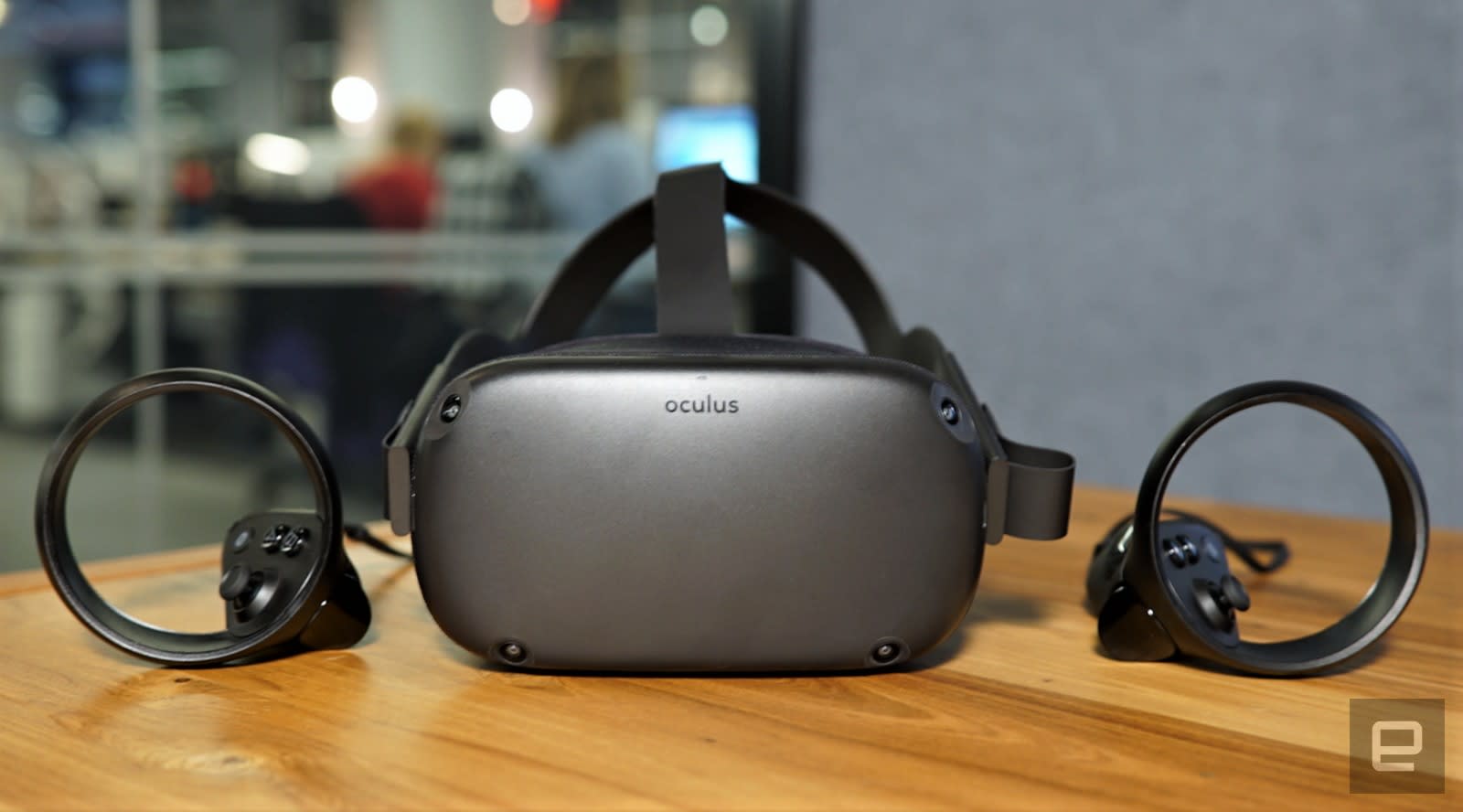 The headset resembles the Rift, except there aren't any distracting wires hanging around. There are four tracking sensors up front, along with a USB-C charging port and power button along the sides. A redesigned adjustable head strap dominates the rear -- it's more flexible than the Rift's, but more rigid than the Go's stretchy straps. Along the bottom, you'll find eye distance controls and volume buttons. While the Quest has built-in speakers, you can plug in headphones to either 3.5mm port along the sides of the headset. And if you're wondering why it has two, that's because Oculus has custom earbuds that'll rely on both ports, so you won't have to worry about maneuvering cables around your head.

The Quest easily fit over my glasses, and it only took around five seconds to get the headstrap in the right spot. It felt secure, but I noticed very quickly that the headset is a bit front-loaded. At 1.2 pounds, it's only 0.2-pounds heavier than the Go and Rift, but I easily feel that added weight along my face, especially around my eyes and nose. It's not a deal breaker, but I definitely had to rest more often than I did with the other Oculus headsets. You can blame the additional cooling needed for the Quest's processor for the weight gain: There's a small fan inside the headset, along with other gear to keep heat down. The fan isn't noticeable during gameplay, and on the plus side, it pushes air into the headset to keep your face cool. 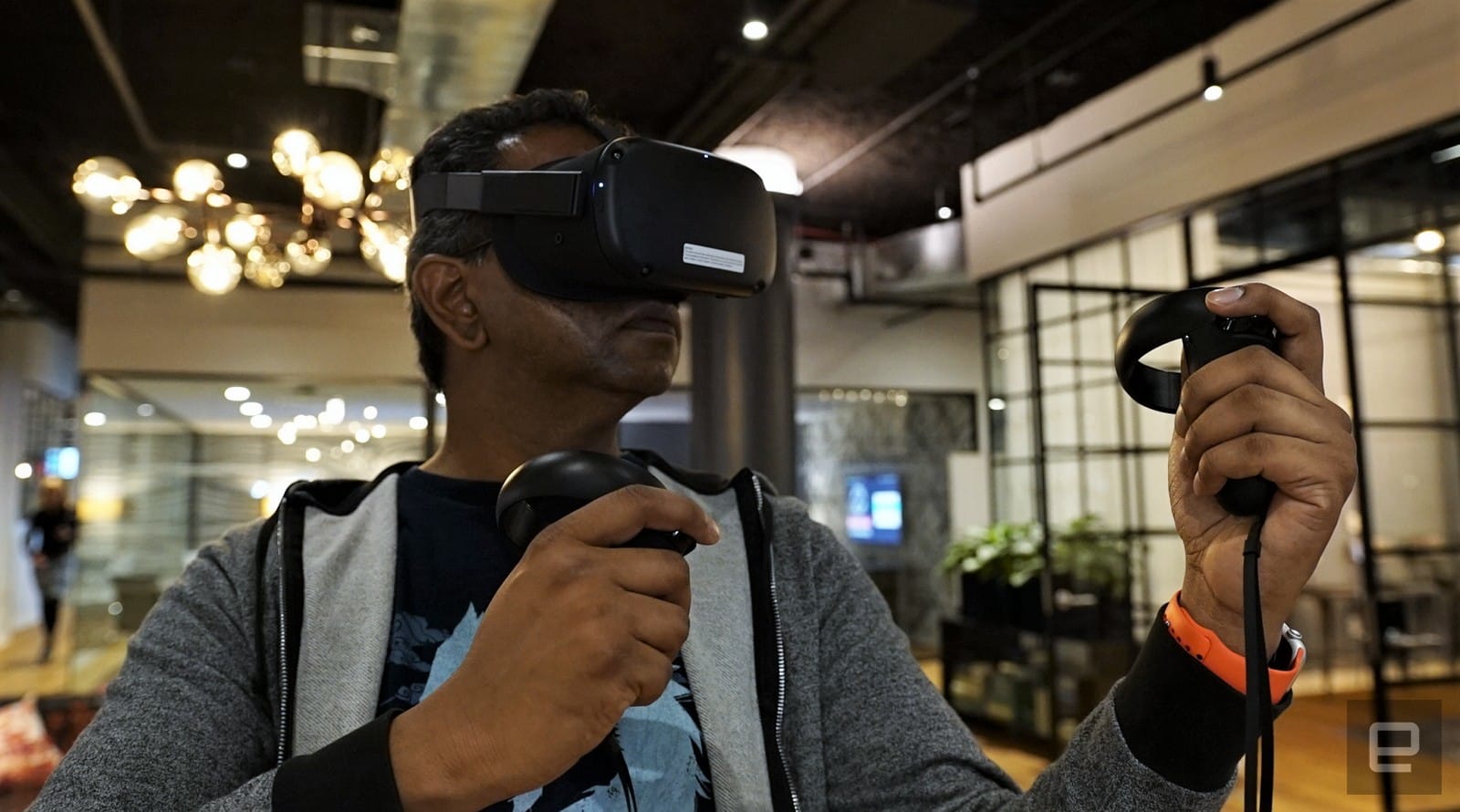 When I put the Quest on, I saw a rough black and white view of my surroundings. From there, I had to set up the Guardian system to avoid bumping into anything (obviously, you'll want to use the headset in a clutter free area). I marked the floor level by placing a controller down, then I used it to map a boundary around my play space. (If you're just sitting or standing in one spot, you can skip that step.) Afterwards, I saw blue walls as I edged closer to the boundaries.

That's similar to the Rift, but the Quest goes a step further: When I peeked through the boundary, I got a monochrome view of the real world again. With other headsets, I've had to remove them entirely to safely navigate my office. While the Guardian system works well overall, I often had to remap my playspace whenever I put the headset down for a few minutes, which got to be a bit annoying. Hopefully, Oculus will figure out a way to better remember those boundaries.

Based on its specs alone, I expected the Quest to deliver far more satisfying VR experiences than the Go, and it didn't disappoint. Superhot looked sharper than it did on the Rift, thanks to those additional pixels, and it played just as smoothly. It wasn't long before I was grabbing pistols in mid-air, dodging bullets and knocking out bad guys with the motion controllers. And speaking of which, the new controllers feel great, even though I prefer the slightly larger grips of the earlier models. Another plus, they only need a single AA battery instead of two.

Thumper, which was a huge hit on PlayStation VR a few years ago, is spectacularly immersive. It's a fast-paced rhythm action game that has you racing down psychedelic roadways fighting giant creatures, and it's simply a blast on the Quest. The graphical fidelity is a noticeable step down from what the PlayStation 4 and my PC put out, there are fewer particle effects and visual flourishes, but it's still impressive for souped-up mobile VR. Most importantly, Thumper always felt as fast as it did on those other platforms.

Beat Saber, another VR mainstay, works flawlessly on the Quest. It's also a great way to test motion tracking, since the game is all about hitting directional blocks quickly. The headset had no trouble keeping up with my wild swings, even when I tried to trick it by turning my head away. I only wish the game had a bigger selection of songs to play -- but if you're looking for a good VR demo for newcomers, this is it. I was surprised that the Quest's built-in speakers delivered clear and thumping sound with all of these rhythm games, I never felt the need to plug in headphones. Just be aware that the speakers are open, so other people will hear your embarrassing Beat Saber tracks.

For some slightly slower-paced gameplay, I tried out Journey of the Gods, a new Zelda-style adventure game. I enjoyed swinging the sword around and taking down monsters with the crossbow, but I was more hooked on the sense of immersion. I've yet to find the perfect VR RPG, but this comes close: I enjoyed simply wandering around the serene world and exploring every nook and cranny.

Watching 360-degree content on the Oculus Video app worked well, but that's relatively simple stuff that even the Go can do without a struggle. The Quest's sharper resolution helped somewhat, but that weight issue made it uncomfortable for longer viewing sessions. Other apps like Netflix weren't available to test, unfortunately.

Content is always the biggest problem for VR, but it looks like Oculus has that sorted: The Quest will have more than 50 titles available for its May 21st launch. That includes Angry Birds VR: Isle of Pigs, Face Your Fears 2 and Moss (which first hit the PlayStation 4). It's a solid collection of old and new VR experiences, and it should keep Quest owners busy for some time. 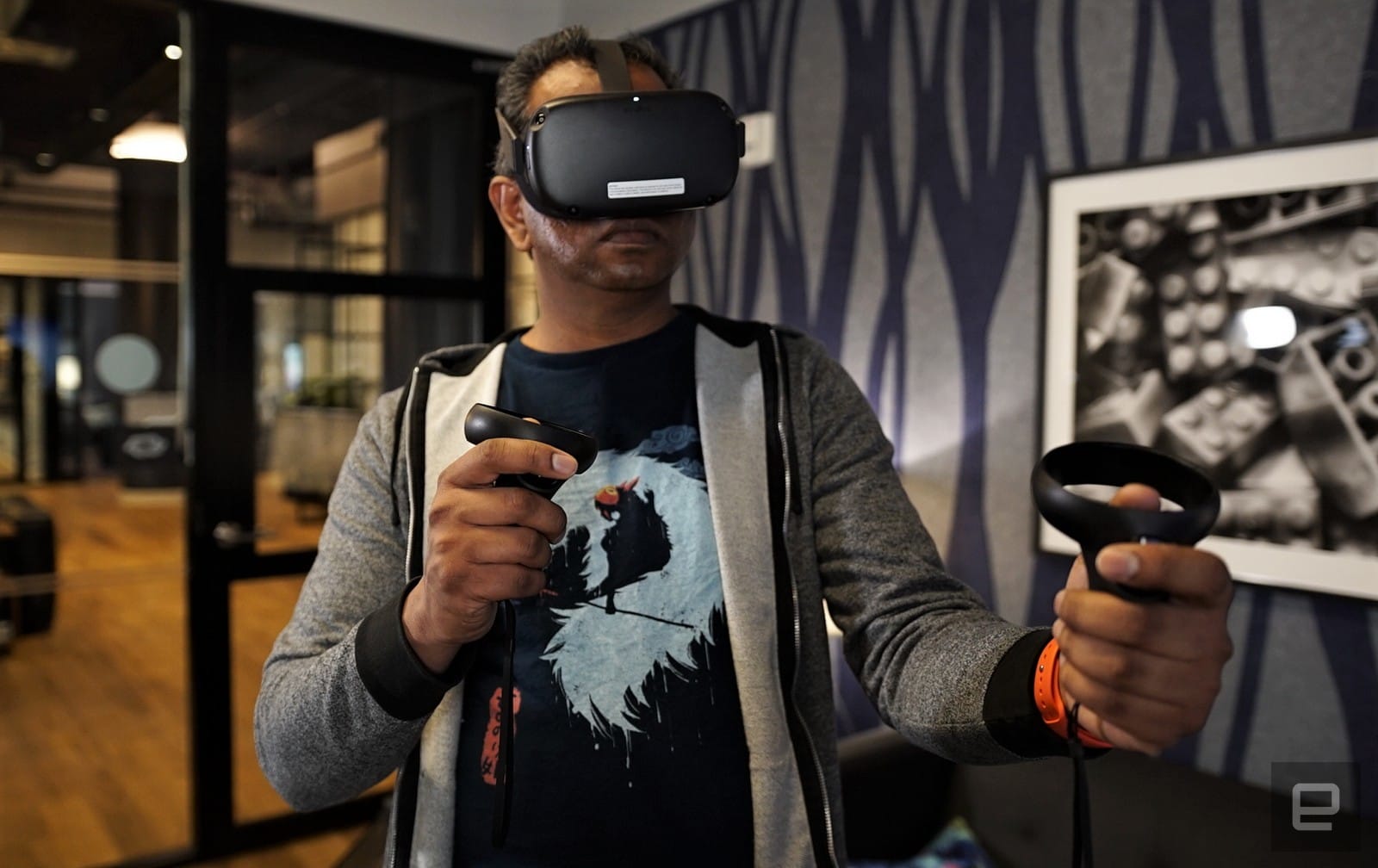 To help make VR more of a communal experience, Oculus also added Chromecast streaming to the Quest for the Chromecast Ultra and third-generation models with better WiFi, as well as the NVIDIA Shield. It worked surprisingly well in my testing, though the video quality can be hit or miss. Still, it's nice to have a way to share your virtual adventures on a big screen.

Oculus claims the Quest gets around 2 to 3 hours of battery life, and that fits with my experience. It'll also charge over USB-C in around two hours. If you really want to spend a chunk of time in VR, you can also use it while it's being charged, but that sort of defeats the purpose of having a truly wireless headset. 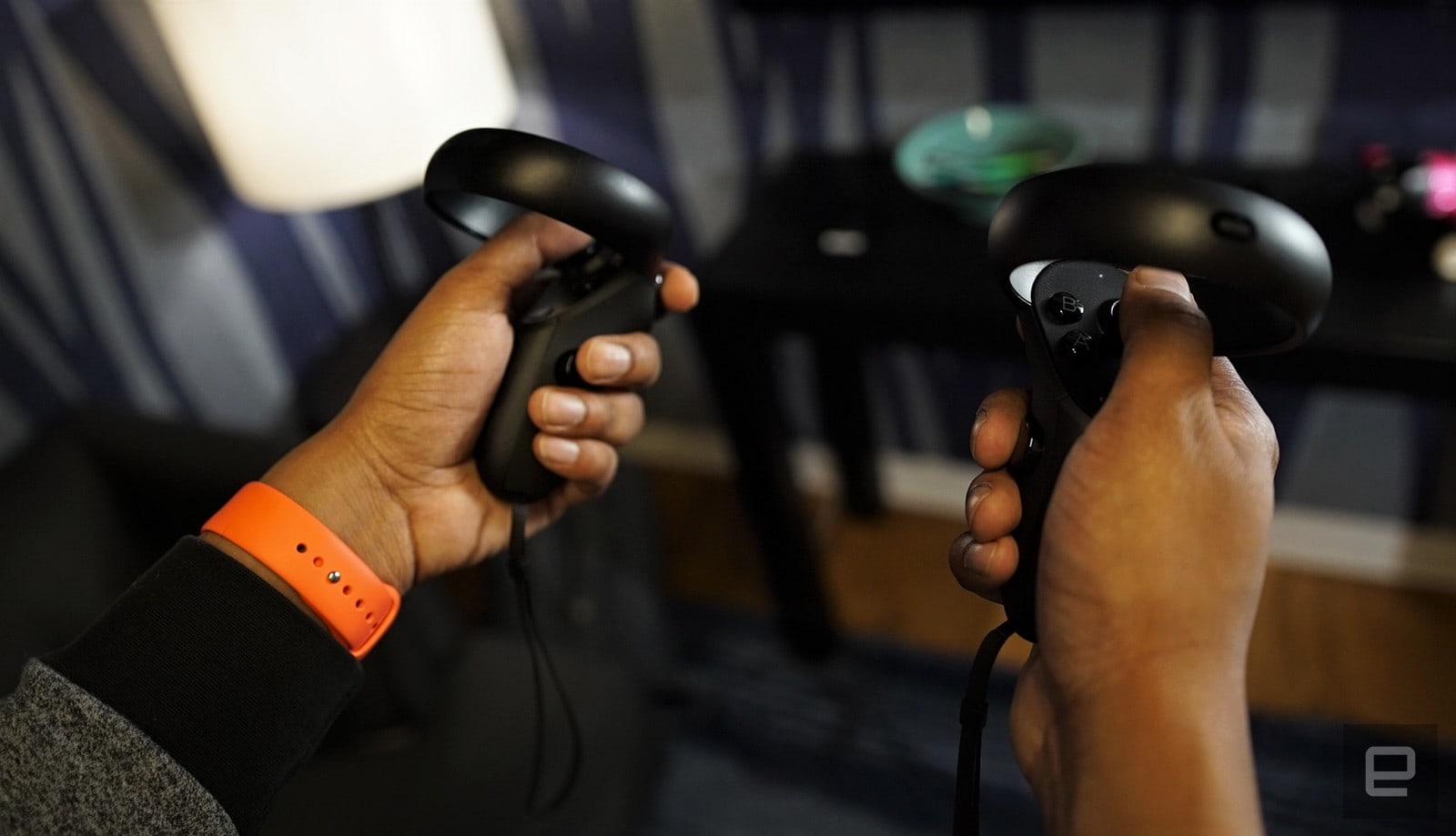 The Quest starts at $399 with 64GB of storage, and you can also bump up to 128GB for $499. Games typically clock in under 500 megs, though a few massive titles like Face Your Fears 2 can surpass 2GB. At this point, though, I think you'll have a hard time filling up a 128GB headset. The Quest's biggest competition at the moment are Oculus' other headsets: The $199 Go is still a great option if you want a more inexpensive taste of mobile VR, and the $399 Rift S will get you better quality VR if you have a powerful computer. And unlike a few years ago, there are plenty of VR ready laptops around today.

Lenovo's Mirage Daydream ($400) is technically a competitor, since it's an all-in-one headset, but we didn't like it too much in our review. As for the PlayStation VR, which you can find around $230 now, it's a solid platform for PS4 owners with tons of games, but its cumbersome setup might be a turn off. 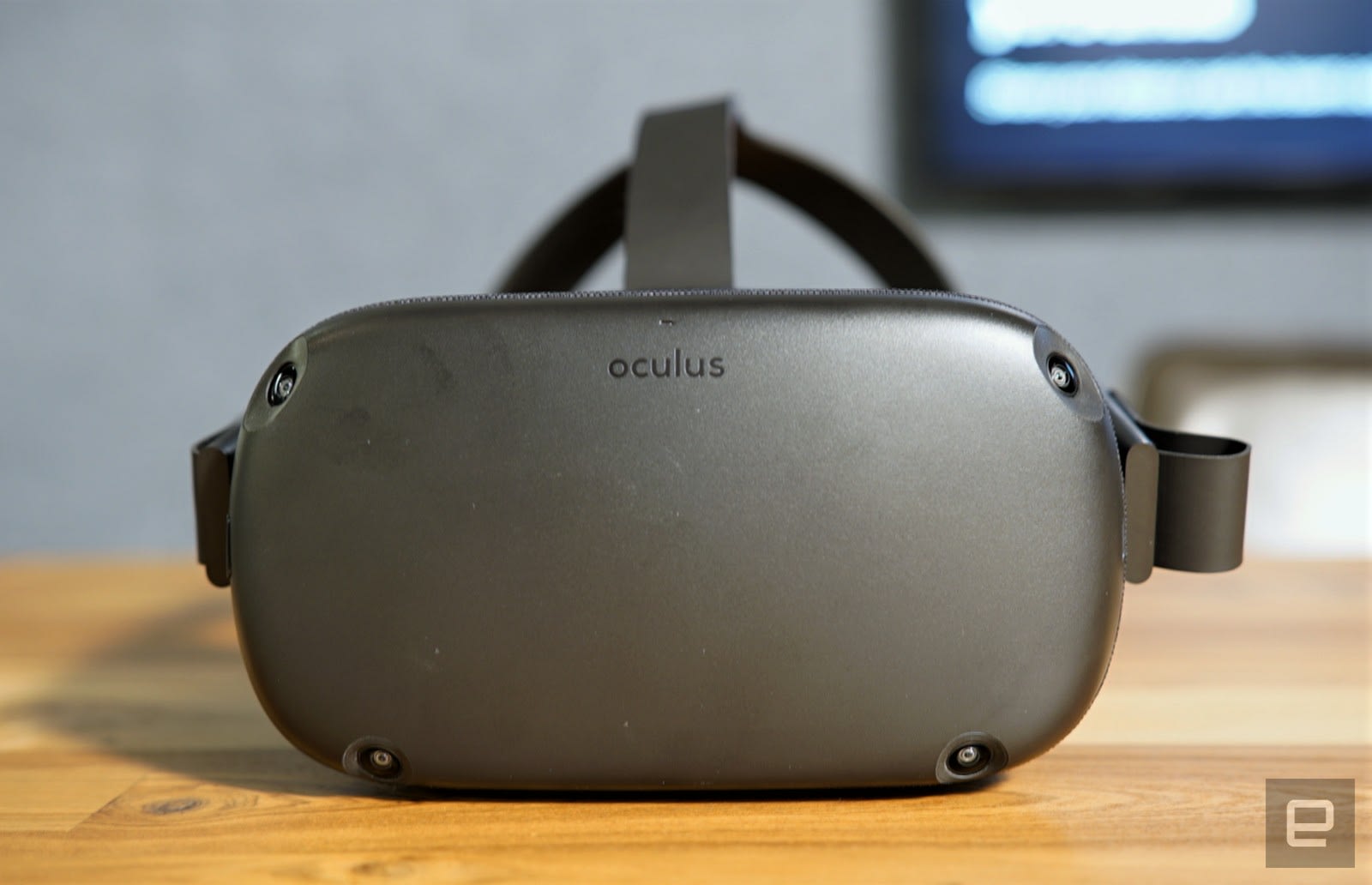 The Oculus Quest is so close to being my ideal wireless VR headset: It's more powerful than the Go, has great motion controllers, and there aren't any sensors to set up. I just wish it was more comfortable. And at $400, it's not something average consumers will jump on immediately, especially when the $200 Go is around. But if you've been looking for a great way to play some trendy VR games easily, without the hassle of a PC or console, it's your best bet.