ASUS' ZenFone 6 has a flippable camera and giant battery

It's priced rather aggressively, too.

It's no secret that ASUS had been struggling in the smartphone world, but following the resignation of its previous CEO, the company has since shifted its focus from the masses to power users, with last year's ROG Phone already hinting at a new direction. That said, ASUS also needs to offer something that's less niche but still stands out from the crowd. This is where the new ZenFone 6 comes in: It's a flagship all-screen device with a flipping camera. It's an implementation once used by the likes of Oppo and Huawei years ago, and more recently, Samsung.

Like most of the latest flagship handsets, the ZenFone 6 features a Qualcomm Snapdragon 855 chipset, up to 8GB of RAM (12GB would have been even nicer) and up to 256GB of storage. It also has three dedicated slots for both Nano SIMs plus microSD expansion -- a rare combination these days. There's also a pair of speakers, dual-microphone noise cancellation, a headphone jack and NFC. You'll find these all packaged within a curved glass back plus a metallic frame, and these come in either "Midnight Black" or "Twilight Silver" (which is more of a white-to-blue gradient). There's a free transparent case in the box to protect your shiny new phone, too.

What may seem a little disappointing is the fact that the 6.4-inch FHD+ screen is LCD instead of AMOLED, but based on my brief hands-on, it's still an impressive IPS panel that supports HDR10. And yes, since it's not an AMOLED screen, there's no in-display fingerprint reader here, but there should otherwise be little to complain about, especially with a conventional fingerprint sensor around back.

ASUS decided to throw in a generous 5,000mAh battery here, while most other phones tend to top out at 4,000mAh. The engineers went to great lengths to justify this decision: It was either a smaller capacity with super fast charging (like 40W) or a larger capacity within the same battery size, but slower charging -- 18W in this case.

ASUS went with the latter, claiming that endurance should come before convenience. There's also the concern of faster degradation with high-power charging. According to the company's comparison tests, both implementations eventually reach the same charging capacity at around the same time, so ASUS might as well offer more battery juice to its users. As a bonus, the battery here does reverse charging too, meaning you can share some love with others in need, so long as you have the right type of USB-C cable handy. 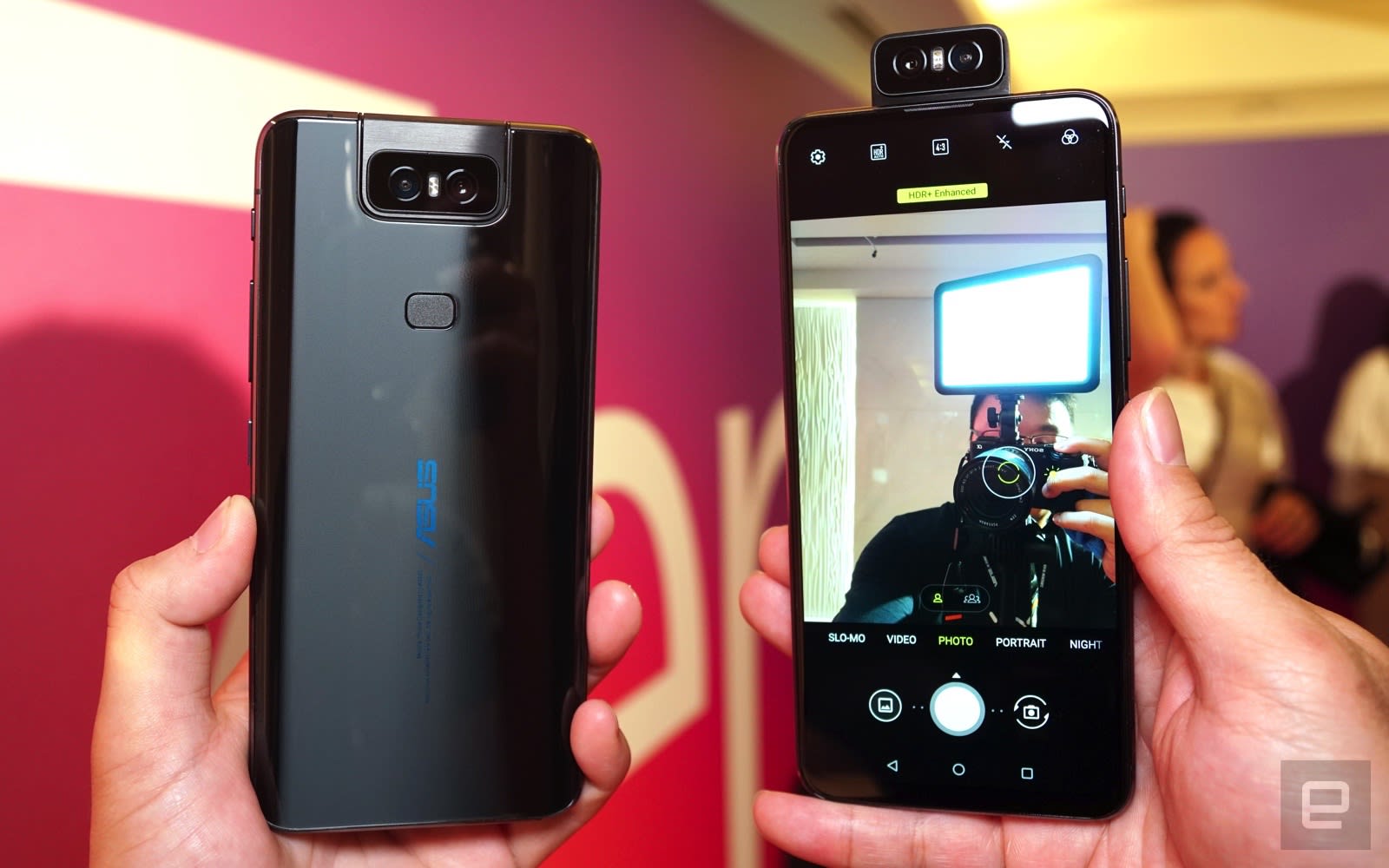 And now, the camera. You'll find both a common 48-megapixel f/1.79 main camera (with laser focus), a 13-megapixel 125-degree ultra-wide camera on the flippable module plus a dual-LED flash. There's no optical stabilization here due to limited space, but both cameras support up to 4K video recording (up to 60fps on the main camera but no electronic stabilization at this speed), and the main one also handles up to 720p 480fps slow-motion capture.

The obvious benefit of having a flip camera is that much like the other phones with a (less complicated) pop-up camera, their screens don't have to put up with a notch. But a flip camera also provides a range of practical uses, namely free-angle shooting (0 to 180 degrees), automatic vertical or horizontal panorama photos and more. You can also use the flip camera for face unlock, but note that it's not as safe as 3D cameras.

The whole flippable module is wrapped in what ASUS calls "liquid metal," mainly for its improved lightness and toughness compared to, say, stainless steel. The movement is activated by a stepper motor which smoothly rotates by two degrees per step. Like the pop-up cameras on other phones, it automatically retracts when a fall is detected -- just in time for a 1.25-meter drop, or at least within a safe angle if it's just a one-meter drop, as ASUS claims. All told, the company says the mechanism has been tested to last for over 100,000 continuous flips.

I haven't had much time to properly try the ZenFone 6's cameras, but my selfies were some of the best I've seen -- perhaps with too much detail, even, thanks to the super high-resolution main camera, but there's always beautification mode to patch up my facial flaws. Indoor pictures look accurate so far, and the HDR++ mode produces even cleaner details, though I'm less impressed with my few cloudy outdoor shots. I've also tried the motion tracking video mode, but again, it's still work in progress; sometimes the tracking stopped halfway through. I'll be able to make a better assessment once I've spent more time with the phone with its final firmware.

On the software side, ASUS is thankfully adopting the stock experience approach with its Android 9-based ZenUI 6, and the device has the fewest pre-loaded apps amongst all the ZenFones -- a thankful 43-percent reduction compared to the ZenFone 2. ZenUI 6 comes complete with the stock system navigation, a system-wide Dark Mode theme and intelligent memory management to boost app load time. There's also Smart Key support to toggle Google Assistant or your custom action, including do not disturb, auto-rotate, flashlight, camera and more. Sadly, you can't launch an app using that physical Smart Key, but ASUS is looking into whether this is feasible.

As ASUS has joined Google's Android Q Beta program, the ZenFone 6 is also on the priority list for Android Q update, followed by guaranteed support for Android R whenever it arrives.

ASUS isn't holding back at all with the ZenFone 6's pricing. When the device launches in Europe today, it'll start at €499 (about $560) with 6GB of RAM plus 64GB of storage. That's quite aggressive for a Snapdragon 855 device, especially when the OnePlus 7 starts at about $645, while the Xiaomi Mi 9 is only a tad cheaper at €449 (about $510) and up. Orders start today and ASUS will start delivering within two weeks from now. Other regions will follow soon, so stay tuned.

All products recommended by Engadget are selected by our editorial team, independent of our parent company. Some of our stories include affiliate links. If you buy something through one of these links, we may earn an affiliate commission. All prices are correct at the time of publishing.
ASUS' ZenFone 6 has a flippable camera and giant battery
android q
android r
androidq
androidr
asus
gear
mobile
smartphone
snapdragon 855
zenfone
zenfone 6
zenfone6