It's leaving Boston, Chicago and other locations where it likely hasn't been doing well.

GM's car-sharing program, Maven, is leaving eight out of the 17 cities it serves across North America, according to The Wall Street Journal. Maven never quite made it big and only ever became available in a handful of locations -- in fact, while WSJ mentions 17, the service's list of cities only has 12 entries. It sounds like instead of expanding to more locations, the automaker decided to focus on its strongest areas instead. A spokesperson told the WSJ: "We're shifting Maven's offerings to concentrate on markets in which we have the strongest current demand and growth potential."

She said the company conducted a market-by-market analysis to figure out which cities to stay in and which ones to exit. Unfortunately, the spokesperson declined to list the locations it's leaving and only confirmed its closure in Chicago and Boston. Maven, she said, will continue operating in Los Angeles, Washington DC, Detroit and Toronto. However, TechCrunch says only Maven Gig -- a different program, which offers rental cars for those who need a vehicle for rideshare and delivery services -- will stay in DC.

We've reached out to Maven for more confirmation and more details. A user from Chicago told WSJ, though, that they've received an email notifying them of Maven's shutdown in the city on July 26th.

Update 05/21/18 7AM ET: A reader has sent us a copy of the email he received from Maven, confirming its shutdown in NYC on July 26th. Thanks, Ray! 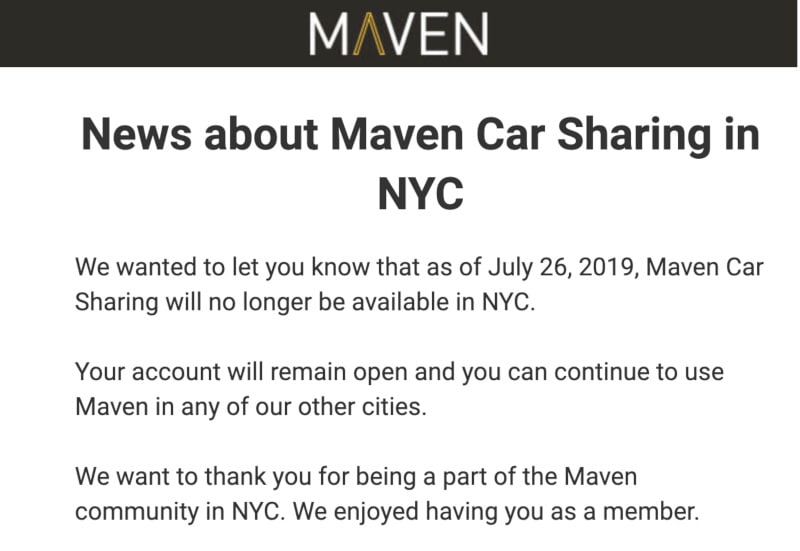