Don’t worry, you can use your Android device, too.

This morning, as I've done regularly since moving to New York City years ago, I left my Brooklyn apartment to head to Engadget headquarters in Manhattan. In an ideal world, I would've been able to use my iPhone to get through the turnstile at my nearby subway station. But, even though the MTA is now supporting contactless payments services such as Apple Pay, only a handful of stations and buses have so far been upgraded to the new One Metro New York (OMNY) system. The one close to my apartment isn't one of them. Still, I wanted to get the full experience beyond a quick demo from Apple. Thankfully, there's a subway station near our office that has the tap-to-pay turnstiles.

Before I get into that, though, let's first talk about the setup process for Express Transit, as the Apple Pay feature is called. When you go to "Wallet & Apple Pay" settings on your iPhone, you'll now see an option called Express Transit Card. After you tap on that, you need to select a credit or debit card, which will be used as default payment for your public transit rides. I already have a couple cards saved on my iPhone for use with Apple Pay, so all I had to do was choose one of them. Then, after a quick Face ID authentication, I was ready to go. The entire process took less than a minute. 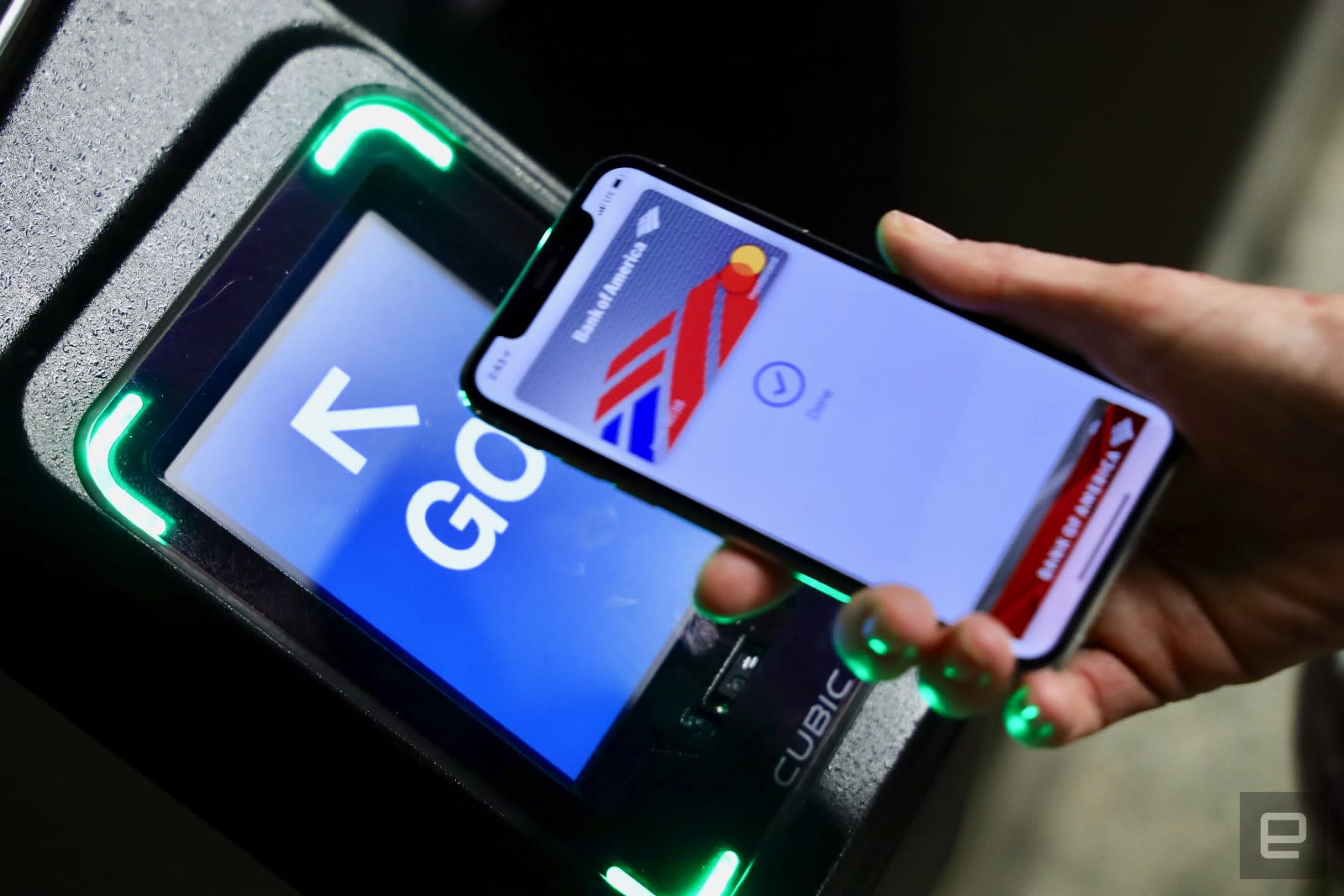 Once I arrived at the subway station, I just placed my iPhone next to the OMNY reader on the turnstile and then the screen displayed a message that says "GO." I didn't have to open an app or unlock my phone to get through, and the same goes for the Apple Watch and Android phone with Google Pay that I tested. The fact that I didn't have to swipe my old MetroCard to try to catch a train was quite satisfying. Not only because it feels futuristic, but because it means I don't have to go to a vending machine to refill my card or worry about it getting lost or stolen.

Unfortunately, right now the OMNY system only works for single-fare rides, but the MTA says that by the end of 2020 all types of fares will be supported, including weekly and monthly passes. The other downside at the moment, of course, is that you can't use this at every subway station or on every bus line. At launch, OMNY is only working at 16 subway stations on the 4, 5 and 6 lines between Atlantic Avenue-Barclays Center (Brooklyn) and Grand Central-42nd Street (Manhattan), plus all buses on Staten Island. An MTA spokesperson told Engadget that more stations and buses will get overhauled toward the end of 2019.

Today's OMNY launch is just the beginning of the MTA's plan to replace the use of swipeable MetroCard, a system that has been in place since 1993, by 2023. And if you don't have Apple Pay or Google Pay, don't worry: The MTA is adamant that it is "platform agnostic," so you can also use services like Samsung Pay and Fitbit Pay. Additionally, in 2021 the MTA plans to introduce its own OMNY-branded contactless transit card, in case there are NYC residents who would rather not use tech from Apple, Google and others.

Interestingly enough, though the physical terminals were installed weeks ago, the other riders I met didn't seem aware that a new payment system was in the works. I didn't see anyone else use their smartphone or watch to pay for their ride. In fact, I let someone use one of my rides, after I had tapped my iPhone for testing purposes, and she seemed confused. When I told her I was just testing out the new MetroCard-less system, they said, "Oh, you can do that now?" Clearly, there's a lot of work to be done when it comes to educating the public, but perhaps now that the system is live and the turnstile screens don't just say "COMING SOON," more riders will start using it.

As for Apple Pay in particular, the Express Transit feature is now live in Portland and here in New York, with support for Chicago's public transportation system expected to come later this year. I, for one, just wish I already had this functionality at my daily subway station. Oh, and if the MTA could figure out a way to make my train come on time every day, well, that would be great, too.