Spotify Stations is the Pandora alternative we need

This experiment should be a permanent fixture.
B. Steele|06.05.19

Spotify is testing a lot of things right now. In the last month alone, the company has revealed its long-rumored in-car device, curated podcast playlists and a standalone Stations app. Heck, those last two were announced in the same week. "We're always testing new products and features to create better listening experiences for our users," a Spotify spokesperson told me multiple times this week, and the company's busy spring certainly supports that. Unfortunately, most users will never get to participate, except in the case of Spotify's experimental Stations app.

After a test in Australia on both Android and iOS, Spotify made its Pandora-esque Stations app available in the US this week. The premise is simple: Lightweight software that breaks out Spotify's radio feature into a standalone app for easy access. Basically, it allows you quickly fire up a music shuffle with minimal taps, instead of having to hunt through the full version to get to it. Until you use it, Stations sounds like if could be just more clutter on your phone, but I promise you it's surprisingly useful.

Inside the main Spotify app, Stations is one of eight options on the main menu. If you're not familiar, Stations is what the company calls its artist- and genre-focused radio channels. I'll be the first to admit I forget it exists until I finish an album and a mix based on that artist kicks in. It's just not a feature I think about much, mostly because of how I typically listen to music. However, when you just want a mix of one artist's tunes, or exploring a genre based on one or more artists, Stations is your ticket. And yes, it's exactly like Pandora. Or at least, it's exactly like what Pandora used to be before it transformed into a full-on streaming service.

When you fire up Stations for the first time, all you have to do is link your Spotify account and you're in business. You need a Spotify log-in, but you don't need a paid subscription. If you do pay up, you won't hear any ads, just like the full version. The app already gives you a few channels based on artists and genres you listen to often from the start. For me specifically, it was Favorites, "Fresh Indie," (a genre station) and two artist stations for Com Truise and Steve Hauschildt. You can also add the popular Discover Weekly mix as a station. It isn't a playlist you can skip around like the main app, but it is the same collection of songs that Spotify has picked for you during a given week. It was nice to already have all of those mixes ready for me so I could start listening immediately. Ditto that they are specifically catered to my tastes. Personalization is something Spotify prides itself on, so this isn't a huge surprise.

You can add more stations as you see fit. A button in the top left corner brings up a menu where you can add more channels based on an artist (or artists, if you're feeling fancy) or a genre-specific mix. If you opt for either of the artist routes, you can tell the app to only play that performer or to include similar acts in the mix. For genres, stations get more specific. For example, Hip-Hop has options for "New Rap," "Old School Hip-Hop" and "Lo-Fi Beats," just to name a few. The app lists the kinds of artists you can expect to hear on a station and it lets you preview before you commit to adding to your lineup.

All of your stations reside on the main screen of the app in clean, bold typography, and the list itself serves as the main navigation. When you scroll through the list, the station changes, which makes browsing a bit of a headache. However, when go back to a station you previously played, the music picks up right where you left off. 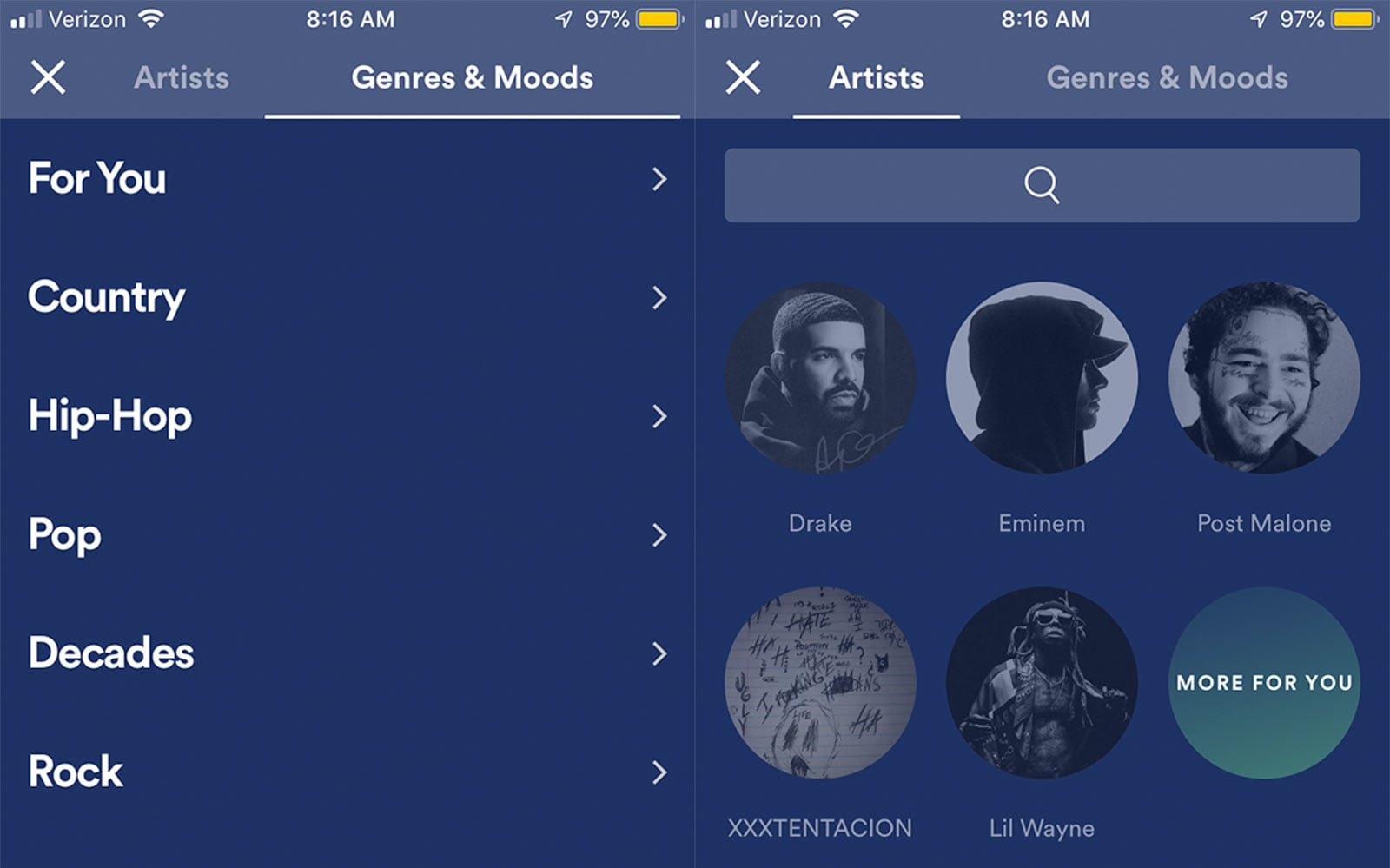 Nothing is permanent when you create a station. If you need to edit, just tap on the station name. From there, you can update the name of the station itself or add/remove artists. You can also change whether or not you want similar artists to be part of the rotation.

Below the stations list is the player. And much like Pandora's radio option, the controls are very simple. You only have play/pause and skip to the next song -- no skipping backwards. If you're a free user, you won't be able to skip tracks at all. Pandora also limits functionality on stations based on your plan. The handy thumbs up and thumbs down buttons are here as well, so you can let Spotify know when you are/aren't happy with a song it selected. Again, that's another standard feature of Pandora. 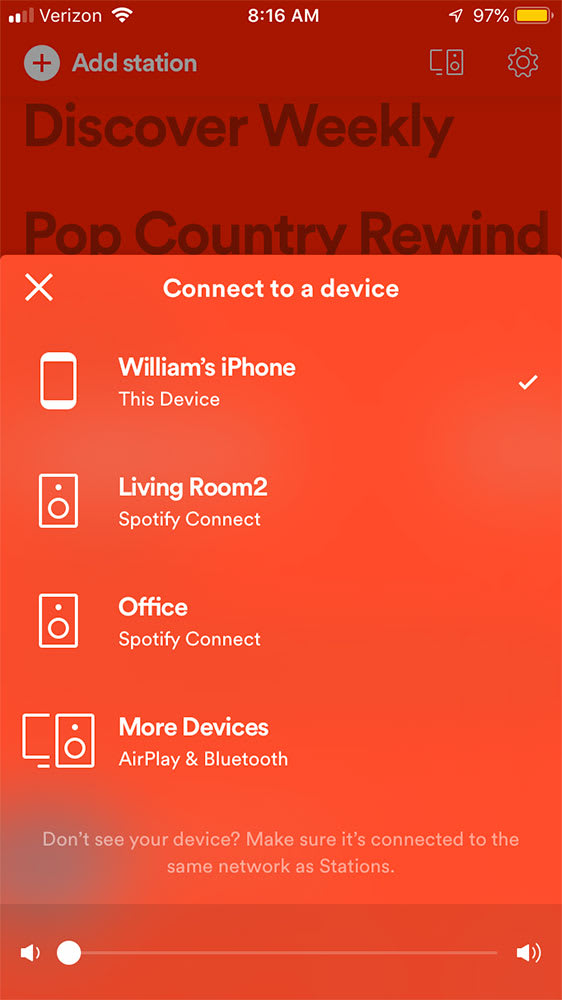 Thankfully, you aren't just limited to listening on your phone either. A device icon in the top right will pull up nearby options for Spotify Connect. Weirdly, only my Sonos speakers show up there. The three Google Cast devices and speakers I have at home do not, even though they're accessible in the main Spotify app. It's not a deal breaker for me since Sonos is my usual go-to, just an interesting quirk I noticed. Speaking of the main app, whatever you're listening to in Stations will show up on the player there if you switch. If you've had Spotify playing on your phone and opened the app on your desktop, for example, you're likely familiar with how this works. It could be handy if you want to make a playlist for later or hear something you might want to revisit. You won't have to remember an artist or song name when you're trying to save things.

Despite Spotify telling me "some of those tests end up paving the way for our broader user experience and others serve only as an important learning," it's easy to make the case Stations should be a permanent fixture. It complements the fully loaded app well, but provides stripped-down access to a handy feature. The radio/mix option is great when you don't know exactly what you want to listen to (even if I don't do it often), so making it easier to use and quicker to navigate makes a lot of sense. I just hope Spotify does something similar for podcasts.