It's the best desktop VR yet, but that comes at a cost.

The Oculus Quest instantly makes every desktop VR headset seem antiquated. Instead of being attached to a computer, you're completely free to hop into virtual reality wherever you are. But the move towards simpler, more convenient VR also comes with plenty of drawbacks. With the Index SteamVR headset ($1,000 for the complete package), Valve aims to prove that there's still plenty of room for tethered high-end VR today. And after spending a week with it, I'm inclined to believe them.

The Index is the most feature-rich headset I've ever seen: It features two LCD panels running at a sharp 1,440 by 1,600 pixels each. While that might seem like a downgrade from the OLED panels we've seen on earlier VR headsets, Valve claims the new LCD panels offer 50 percent more subpixels -- basically, making everything even sharper even with the same pixel count. The Index also upgrades the standard 90Hz VR refresh rate to 120Hz, ensuring smoother visuals with higher framerates (there's also an experimental 144Hz mode). Most noticeably, the headset offers a wide 130-degree field of view -- 20 degrees more than the Vive and most other headsets -- making it much more immersive, since your eyes will have a much larger VR presentation to take in.

At first glance, the Valve Index doesn't look much different than most of the VR headsets we've seen over the past few years. Its lenses are housed up front, and a rear headstrap secures it to your noggin. It's only a tad lighter than the bulky Vive Pro, weighing in at 1.78 pounds instead of 1.83 pounds, but the overall design is more elegant. Underneath the plastic front visor, there's an empty rectangular slot with a USB 3.0 connection. Valve calls this the "frunk," an expansion slot meant for modders. Reality Instruments is already using it for an LED accessory that can display things like notifications from your gameplay, and there's plenty of potential for other interesting add-ons. This single feature also shows how differently Valve is approaching the VR market compared to Oculus, which tightly controls every aspect of its hardware.

Dig a bit deeper into the Index's design, and you'll see that Valve paid extra attention to comfort. The microfiber cushioning around the eyepiece and headband are much more breathable than the simple foam we saw on the Vive. And there's a helpful eye relief dial that lets you adjust how far the lenses are from your eyes or glasses. You won't find any headphones on the Index. Those large saucers on the sides of the headset are actually near-field speakers, which deliver immersive sound without touching you. So sure, they won't seal off external noise, but they'll let you stay in VR longer since there's zero ear fatigue. 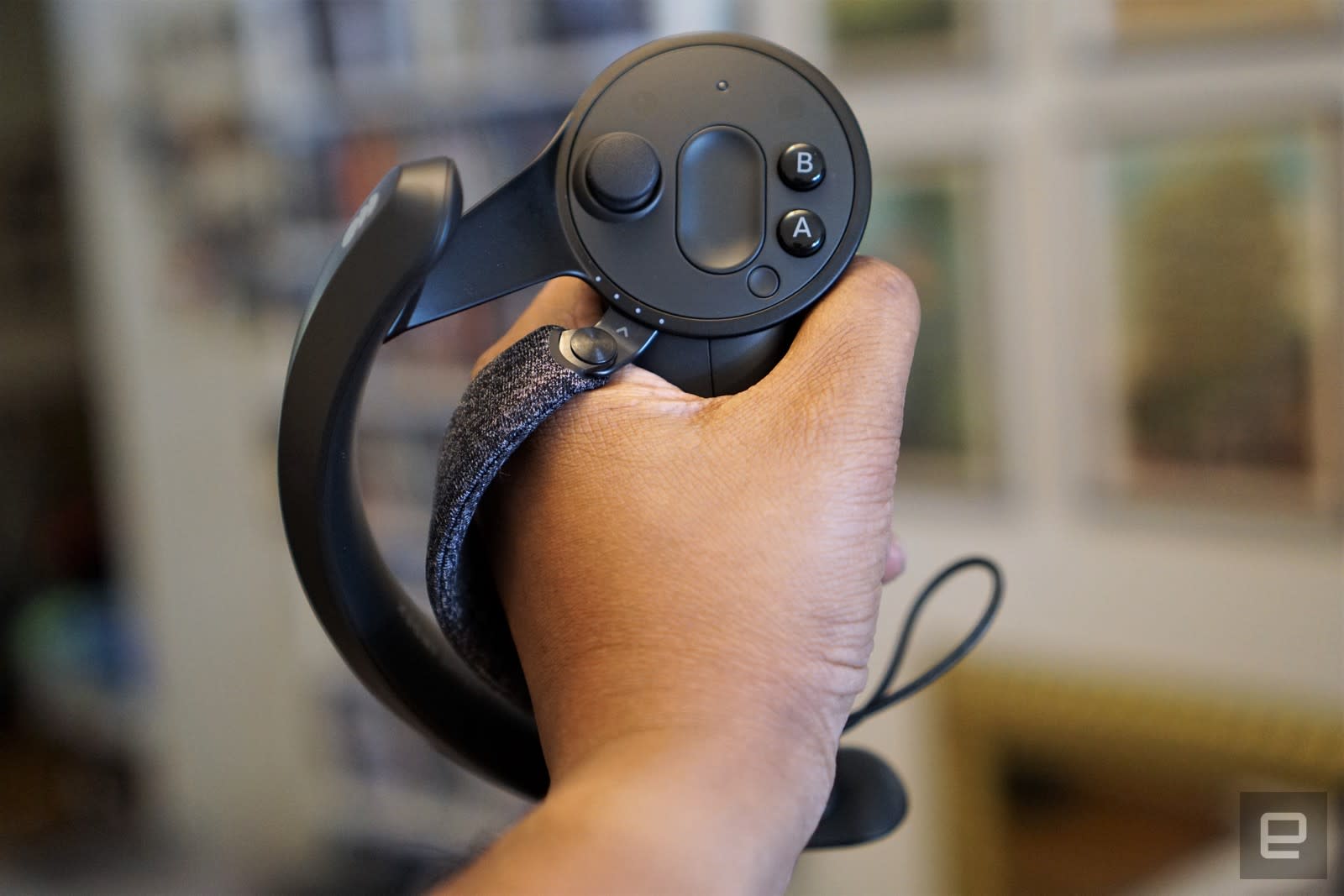 The Index also marks the debut of Valve's finger tracking "Knuckles" controllers. While the company first announced them way back in 2016, they've only been available to select developers until now. It's easy to see why Valve waited a bit: they look and feel nothing like the Vive and Oculus Rift's. You don't just grab the Index's controllers: you have to slip your fingers under a micro-fiber strap, which secures them to your hands. You tighten them by pulling a small elastic band at the bottom, while a nearby button releases the grip.

Once you have them strapped on, the Index's remotes rely on 87 sensors to track every bit of your finger movement. At best, other VR remotes could only tell if your thumb was up or down, they relied on grip buttons to open and close your hands. But the Index lets you naturally make any sort of hand gesture, like waving at an NPC, or pointing at a specific object. But of course, they also feature traditional VR controls: a joystick, face buttons, trackpad and trigger. The Index's controllers work best for gamer optimized for finger tracking, but they're also backwards compatible with earlier VR titles.

I won't go too deeply into the Index's setup process yet, since Valve promises plenty of improvements ahead of its June 28th release. But I won't lie, it's a bit disappointing to deal with installing room sensors when other modern desktop VR headsets, like the Rift S and Windows Mixed Reality offerings, all have theirs built-in. My review unit came with two Index base stations, which offer better range and a larger field of view than the original Vive's. The Index is also an easy upgrade over the Vive Pro, since it's compatible with that headset's base stations.

So how well does the Index actually work? From the moment I put it on, I could feel all of the care Valve put into it. Even though it's a hefty headset, it rested comfortably on my head. The weight distribution is balanced enough that I never felt any excessive pressure on my nose, something that I had trouble with on the Oculus Quest. And while it was a bit weird at first to have speakers near my ears, instead of headphones, I grew to love them. They sound fantastic, have plenty of depth, and made directional sounds more immersive. Best of all, they didn't make my ears sweaty as I spent hours in VR.

Even though it shares the same resolution as the Vive Pro (as well as other high-end headsets, like the Samsung Odyssey), the Index produces a sharper and more vibrant image. Oddly enough, it was most noticeable during more mundane situations, like walking around SteamVR's virtual living room, or perusing my desktop. The new LCD display does a better job of rendering text and other fine lines, which might not sound very exciting, but goes a long way towards making the Index more useful as a potential monitor replacement, plus it makes games look better too.

The improved field of view made titles like Space Pirate Trainer and Duck Season significantly more immersive. Instead of feeling like I was peering through two round displays into a virtual world, it was more like I was actually a part of that reality. The visual upgrade was even more prominent in slower experiences like Google Earth, which gave me a bit of vertigo as I was navigating around the globe and flying over cities. I've never had that reaction with other VR headsets. My body genuinely started to believe I was floating above Rio de Janeiro. Jumping into 360-degree Street View mode, meanwhile, felt like something close to teleportation.

To get a handle of the new controllers, I hopped into Valve's Aperture Hand Lab demo, a hilarious short training sequence set in the world of Portal. A variety of sassy robots stepped me through basic gestures, like waving and high-fiving. At one point, I faced off against one in a quick game of rock, paper, scissors. Later, I had to give a robot a very strong handshake (I didn't even realize there was grip pressure sensitivity until then). Being able to interact with a VR environment simply by moving my fingers and raising my hands felt groundbreaking -- it was like I was experiencing virtual reality for the first time.

Unfortunately, the hand tracking is only fully supported in a few titles so far, like Arizona Sunshine and Vacation Simulator. It also seems like developers are just getting their grip on how to implement it. Nothing felt as organically immersive as Valve's demo. Instead, games like Shadow Legend basically translate closing your fingers the same as hitting a grip button on earlier controllers. That makes sense, but I've yet to see anything take full advantage of finger gestures. At least developers have plenty of time to figure out ways to adopt the new controllers. And hopefully, we'll see some future VR titles built entirely around them.

The big downside with the Index right now is its price: the entire kit will run you $1,000. If you already have a Vive Pro, you can snag the headset and controller for $750. And if you just want the finger tracking experience, Vive and Vive Pro owners can get those separately for $279. Clearly, this isn't hardware being targeted at regular users. But it's still nice to see companies pushing the boundaries of desktop VR -- the few people who can afford the Index will lap it up, and it'll convince more developers to pay attention to VR.

At this point, I can't really judge the Valve Index completely, since the company is steadily updating its software and developers are still optimizing their games for the new hardware. But I can say that it's the most exciting desktop VR headset I've seen in years. It has all of the upgrades I wanted in something like the Oculus Rift S, and none of the downsides of lesser portable hardware like the Quest. I'm all for cheap and convenient VR, but high-end experiments like the Index help get us there.