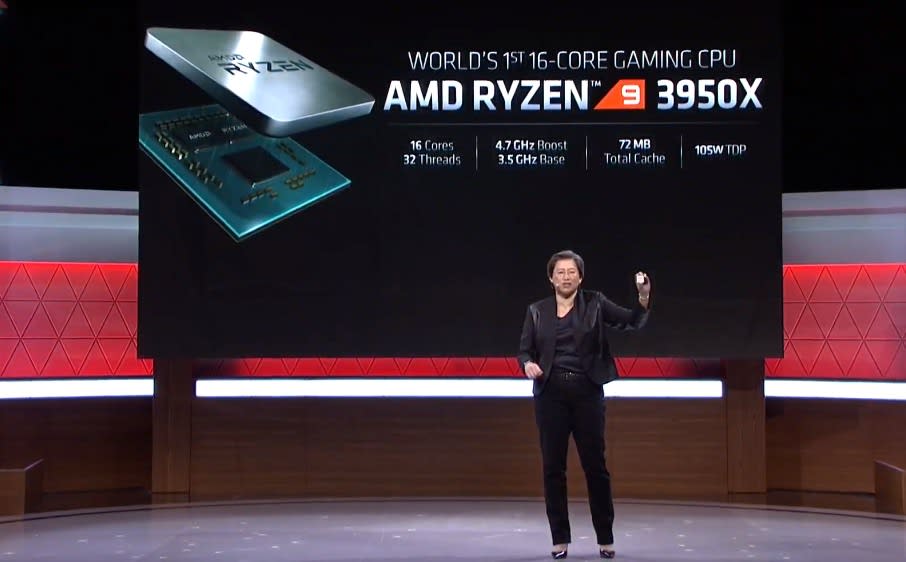 Today during its E3 2019 press conference, AMD announced it's pushing gaming beyond 8- or 12-cores, with a new "best of the best" CPU. The "World's first 16-core gaming CPU" is the Ryzen 9 3950X, which will be available in September for $749. Outdoing Intel's 8-core gaming CPU, CEO Dr. Lisa Su said this chip has "the highest boost frequency in our stack" that goes up to 4.7Ghz with 72MB of cache.

Continuing AMD's theme of trying to beat Intel on the combination of performance, value and efficiency, the Zen 2 hardware operates at 105 watts. Of course, there's more to the world than gaming CPUs and cores don't always translate to an advantage in raw performance. Still, this latest addition to the Ryzen line is a powerful challenge, and keeps up the pressure following the introduction of its 12-core sibling, the 3900X, just last month at Computex.

In this article: 3950X, amd, CPU, E32019, gaming, gear, Lisa Su, personal computing, personalcomputing, ryzen 9
All products recommended by Engadget are selected by our editorial team, independent of our parent company. Some of our stories include affiliate links. If you buy something through one of these links, we may earn an affiliate commission.