Playing as many Londoners in 'Watch Dogs: Legion'

The end of the authored protagonist.

In most stories, there's a hero. Someone you can root for, empathize with, trust to guide you through their journey's twists and turns. In major game studio AAA action franchises, especially so.

Watch Dogs: Legion -- the upcoming third game in the open world hacker series, arriving March 6th 2020 -- does away with all that. From a sprawling, dystopian London you can recruit anyone that you want to be your protagonist to hacking collective DedSec.

That really means anyone you find -- the bartender, the security guard, the university worker whose father is in debt or the loan shark preying on him.

They will form a collective of up to 20 characters, after you win them over individually through mini-missions. You can freely switch between members of your squad, who carry different expertises -- think GTA V's mechanic but much much bigger. When not controlled by you, teammates will go about their daily lives at work, home or the pub. Cutscenes will play out differently according to the character who's in them. But mishandle your protagonist and they might be captured, or even suffer permadeath.

The London of Legion, after all, is more V for Vendetta than Bridget Jones. In a post-Brexit future, the UK capital is overrun with private security contractors, drone swarms, resistance fighters and cyberpunk clichés. AI has caused mass unemployment; the shiny cars you can hijack are able to drive themselves. But your characters are hackers, so they can surf giant delivery drones over an enemy base in Camden Town or tap into ever-present CCTV systems for reconnaissance.

The UK's encroaching surveillance culture and messy, protracted divorce from the EU are both volatile current topics that would seem ripe for a statement -- yet Ubisoft seems to have a penchant for teasing hot-button societal issues in its games only to refrain from saying much that's thought-provoking about them (see: Far Cry 5). Based on my 45 minute early demo at E3, Legion ticks all the boxes of adequate open world gameplay: faithful architectural recreations, combat/stealth/hybrid classes of characters, an infiltration of a police HQ. 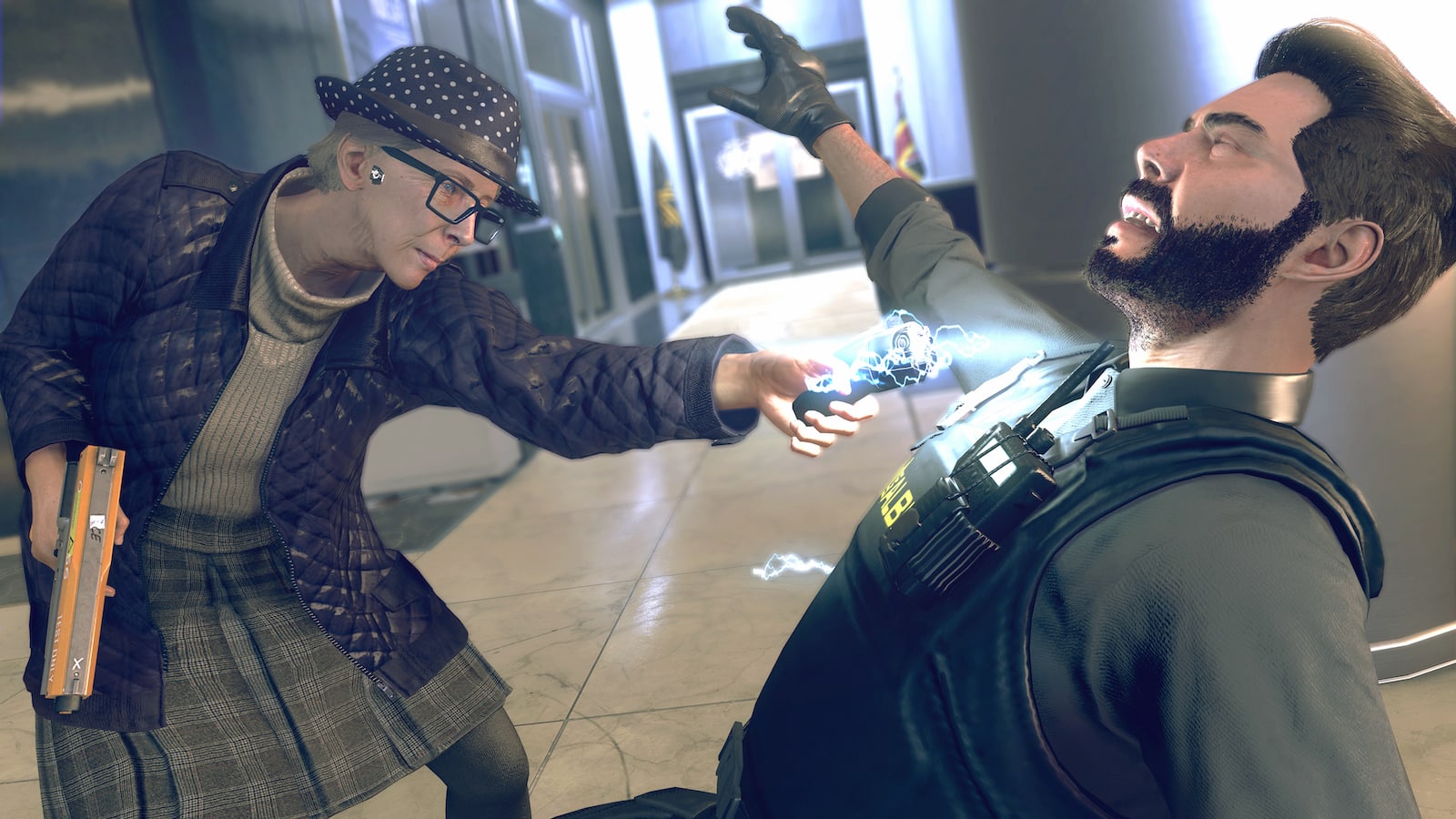 Which is why right now, the world's persistent, playable population seems like the boldest move with the biggest potential. Theoretically, you could make an entire hacker collective of elderly women, punks or students.

Each civilian is procedurally generated, with voice acting (the voices apparently are modulated from character to character), backstories and relationships with partners and parole officers. These details also affect their traits: a former Olympic target pistol shooter champ and policeman might have the same perks when using pistols.

"There's a big relational database called Census, it on-demand unpacks who that character is and unpacks them into a real, persistent NPC -- gives them a voice, gives them a personality, gives them animation," said Clint Hocking, Legion's creative director. "Your simulation can have many hundreds of different people running around in it persistently at a time." 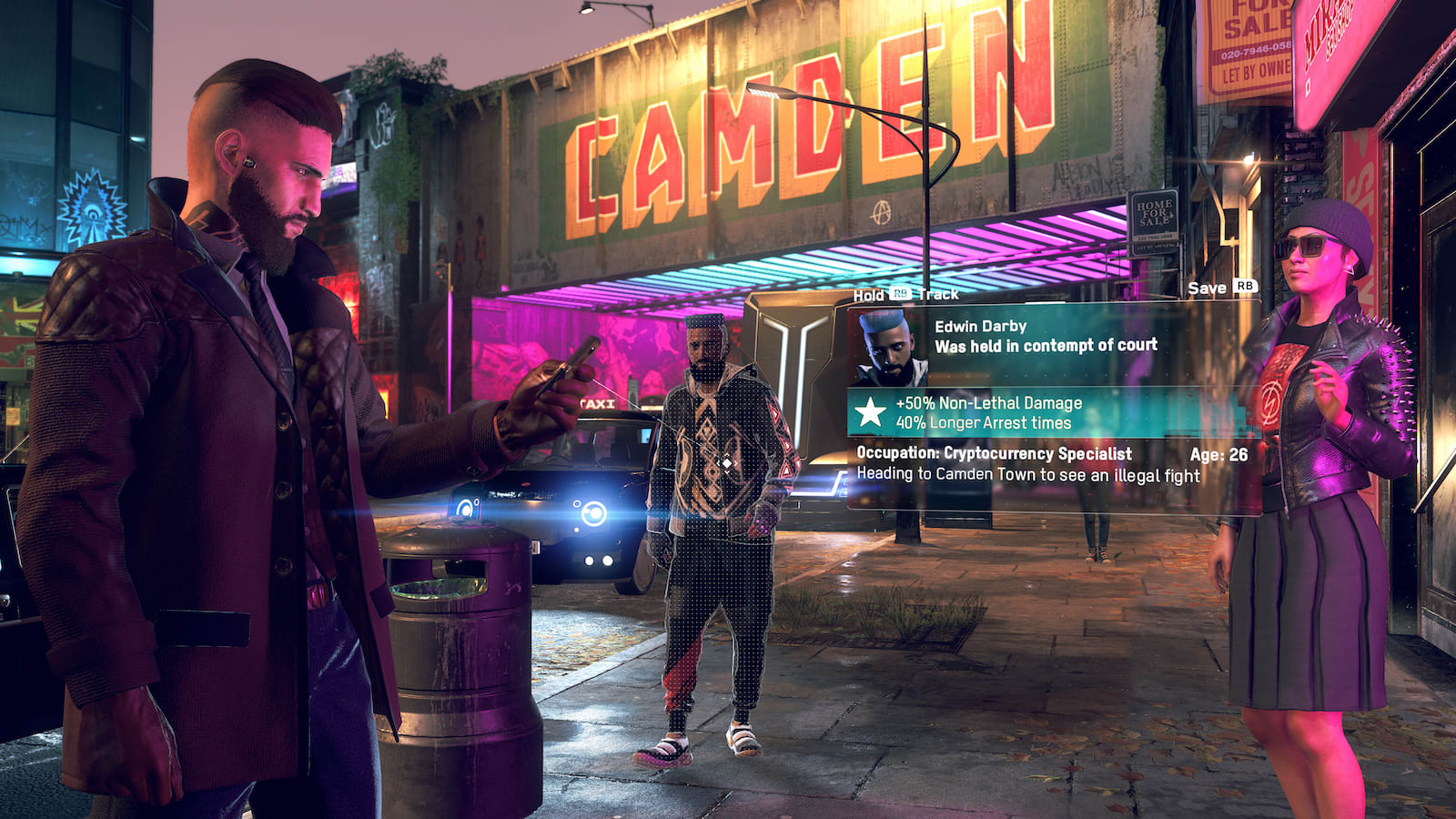 Games like Cities: Skylines and Rimworld play with procedurally generated characters in a similar way, but as individuals in a broader simulation, not the stars in an action game.

In some ways, this mechanic builds naturally from the first two Watch Dogs games -- set first in Chicago then San Francisco -- which attempted to humanize every pedestrian by allowing you to hack their devices and spy on the skeletons in their digital closets. The problem was repetition. Reading the same secrets attached to different NPCs destroyed the illusion that they were individuals, not just dull text receptacles.

The demo of Legion I played wasn't long enough to truly get to know the characters, but if you spend 20 hours with them, it won't take long to see if they feel like lived-in characters or paper dolls. If they're the former, it would be a step forward for immersive sims, and their ability to let players create their own narratives. Maybe games don't really need an individual authored hero, all they need are characters that feel fully alive.