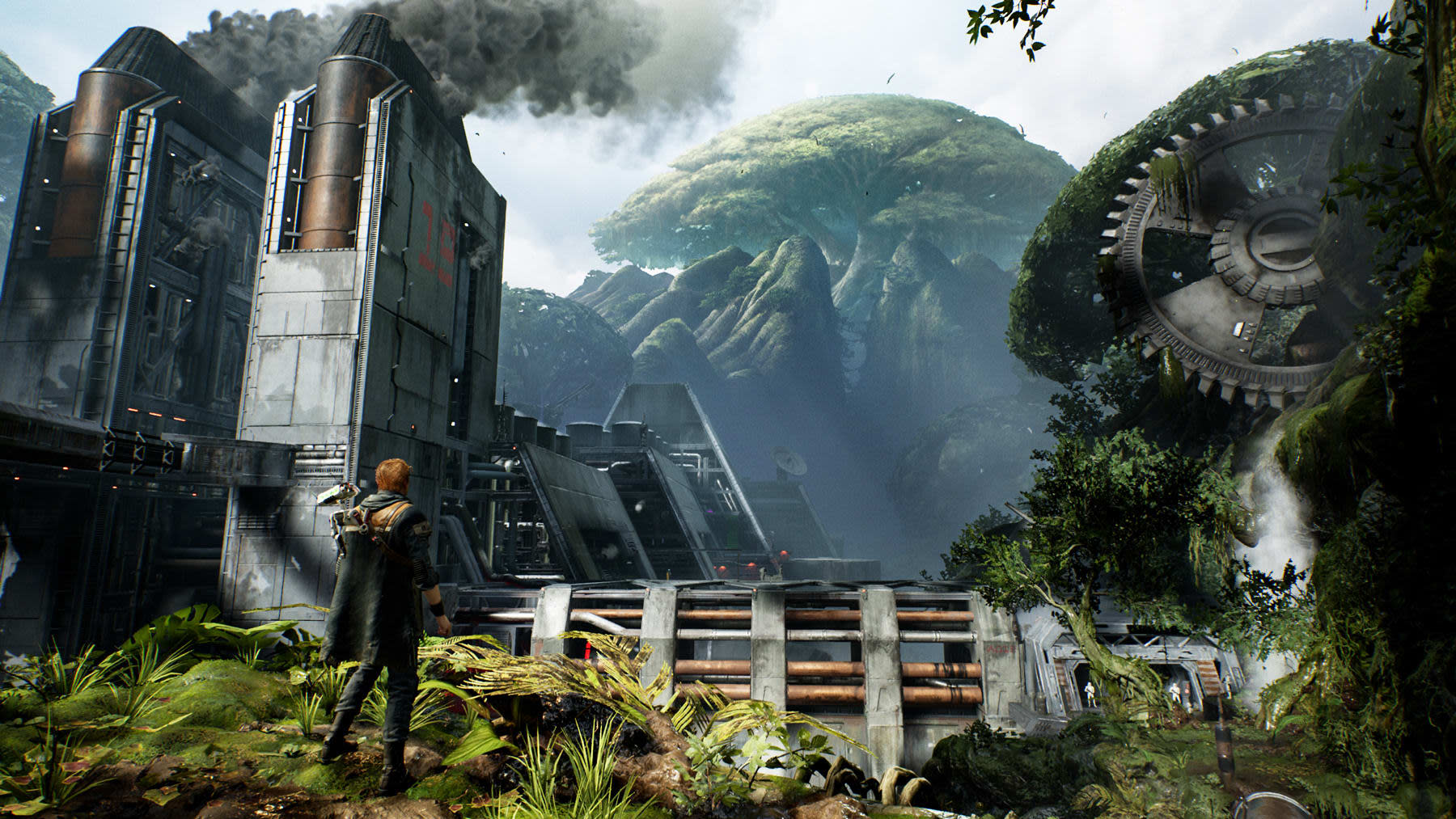 ‘Star Wars Jedi: Fallen Order’ is a delicate balance of light and dark

The game explores one of the most tonally complex eras of the Star Wars timeline.

"Are you sure you want to plug into this thing?" Cal Kestis, a Jedi Padawan asks nervously. His partner, an adorable droid called BD-1, bleeps confidently and plugs into a nearby computer panel. Immediately, the enormous 'cutter' drill starts burrowing through the wicked Empire's base. The machine's movement reveals a secret passageway which Kestic then rushes toward enthusiastically. "That's why you wanted to move this thing," he exclaims. BD-1 boops again. "You had no idea that was there, did you?" Kestis chuckles wearily. "You just wanted to turn that cutter on."

These back-and-forth quips are littered throughout the first official gameplay demo for Star Wars Jedi: Fallen Order. They're similar to those shared by Nathan Drake and his pals in the Uncharted franchise; microdoses of comedic relief that slowly flesh out the characters.

The game, though, is set in a dark period of the Star Wars universe. The darkest, in fact. Developer Respawn Entertainment says the story takes place a few years after Revenge of the Sith and before the events of A New Hope. The devious Palpatine has already passed Order 66 and all but a handful of Jedi have been wiped out. Kestis has survived, of course, alongside a former Jedi Knight called Cere Junda who serves as his mentor throughout the game. The heroic pair are a rarity, though. The Empire is consuming the galaxy and the good guys have, essentially, lost.

"It's the absolute bottom," Aaron Contreras, lead narrative designer on Jedi: Fallen Order said. "Tyranny is ruling. You have this autocrat who's running the show, he's got a propaganda machine, the fascists are totally in charge. We look at that as a very opportune period to set a story of one little flickering light of hope in a galaxy dominated by darkness. It's a rich, fertile ground for us to explore."

Jedi: Fallen Order is an action-adventure game with, according to Respawn Entertainment, "thoughtful combat." It's no Dark Souls, but you can't simply charge and button-mash your way through enemies. For one, Kestis has a small health bar and will drop to his knees after taking a handful of hits. For another, the game has multiple enemy types, including flametroopers and expertly-trained purge troopers, that require specific strategies to defeat.

I experienced this first-hand during a behind-closed-doors demo at E3. If you hold down the left bumper, for instance, Kestis will bring up his lightsaber and block basic attacks, including batons and blaster fire. Some attacks, illustrated with a flashing red icon, are unblockable and require an evasive roll or double jump. Pressing the block button at just the right moment will also parry an attack, leaving the enemy vulnerable for a second, and deflect plasma bullets back toward the person who shot them. The latter is, alongside a tricky lightsaber throw, one of the only ways to defeat enemies on out-of-reach platforms.

It sounds simple, but I quickly found myself overrun with enemies. Kestis can use the force to push enemies back and a time-slowing ability to buy himself a few seconds. These moves are tied to a meter, though, that quickly depletes and can only be recharged by landing lightsaber attacks. In tight situations, you can heal with stimpacks that are ejected by Kestis' robotic companion, BD-1. These med-kits are limited, though, and require a few crucial moments to request, catch and apply. If an enemy is nearby and preparing to attack, you won't have enough time to finish the sequence.

That doesn't mean you can't get creative, though. One of my favorite moves was a heavy 'focus attack' which, when combined with the jump button, allowed Kestis to nimbly somersault over the enemy and slash at their back. What you can't do, though, is switch off. Jedi: Fallen Order demands your concentration and will punish players who don't consider the type and volume of enemies that are attacking them.

You can feel the Empire's influence in every frame of Jedi: Fallen Order. An extended demo shown at EA Play, for instance, starts with Kestis sneakily swimming among some seaweed-covered AT-AT walkers. The lumbering machines are attacking Kashyyyk, the homeland of the beloved Wookies, and a group of resistance fighters led by Saw Gerrera. That character, voiced by Forest Whitaker, has appeared in two TV shows -- The Clone Wars and Rebels -- and the 2016 live-action movie Rogue One. His troops are fighting admirably, but it's obvious they don't have the same resources and, by extension, odds of victory as the pristine Stormtroopers.

But there's always hope. Kestis manages to climb aboard the AT-AT walker, kill everyone on board and then use its oversized weapons to cut through the Empire's forces. For a moment, the Jedi-in-training seems unstoppable. The AT-AT walker soon falters, though, forcing Kestis and BD-1 to resume their infiltration at ground level. This is the moment when the shorter gameplay demo, available on YouTube, begins. Kestis is always outnumbered but, thanks to his growing mastery of the Force, able to slash, dodge and parry his way out of any situation. In the hands of a competent player, he's a devastatingly efficient killing machine.

It's all too easy to lose yourself in these heroics and believe, for a moment, that Kestis will be able to overcome his foes and bring down the Empire. But he can't, not really. We know that Palpatine and Darth Vader still have control of the galaxy in A New Hope. And, because Kestis never appeared in the original trilogy, there's a strong possibility that he doesn't survive the events of the game. "On the one hand we have this really exciting setting, literally called 'The Dark Times' in Star Wars," Contreras said. "It's the rise of the Empire. On the flip side, though, we know where we're going, so we've had to work inside a box, which is always good and bad creatively."

He added: "Our hero isn't going to blow up the Death Star, because Luke Skywalker does that, right? So we have to work within that existing narrative and find a space in there to have a satisfying story." The setting makes it impossible for Kestis to have a huge, universe-altering impact. If he did do something crazy, it would have been felt and, presumably, mentioned in the original Star Wars movie. That doesn't mean his story can't be interesting, though. He could save a planet or system, for instance, that doesn't influence the greater war or regime controlling the galaxy.

Rogue One, Solo, Rebels and the upcoming Cassion Andor series all operate in a similar narrative space. Heck, even Vader Immortal, an episodic VR game, is set before the events of episode four. They can't change the original trilogy, but their stories can flesh out heroes and villains that operated on the fringes or were never widely acknowledged.

The narrative setting has a huge impact on the audio, too. Nick Laviers, the audio director for Jedi: Fallen Order, explained that the music is designed to evoke the original trilogy. "It's also got to be space age," he told Engadget. "It's got to be futuristic, but it's also got to have this 1970s, warm and familiar technology vibe to it. That's some of the notes we get back from [the original movies]. Very much along those lines. Visually and from an audio point of view. It's like, "How can we make this a little bit more reminiscent of going and seeing Star Wars in 1977? That kind of feel."

That blend of old and new is integral to Star Wars. The original movie, after all, is set in a galaxy "a long time ago in a galaxy far, far away." As Laviers explained, "it almost implies nostalgia. It's like, 'Okay. we're going to go with futuristic but we're going to make it old fashioned, as well.'" 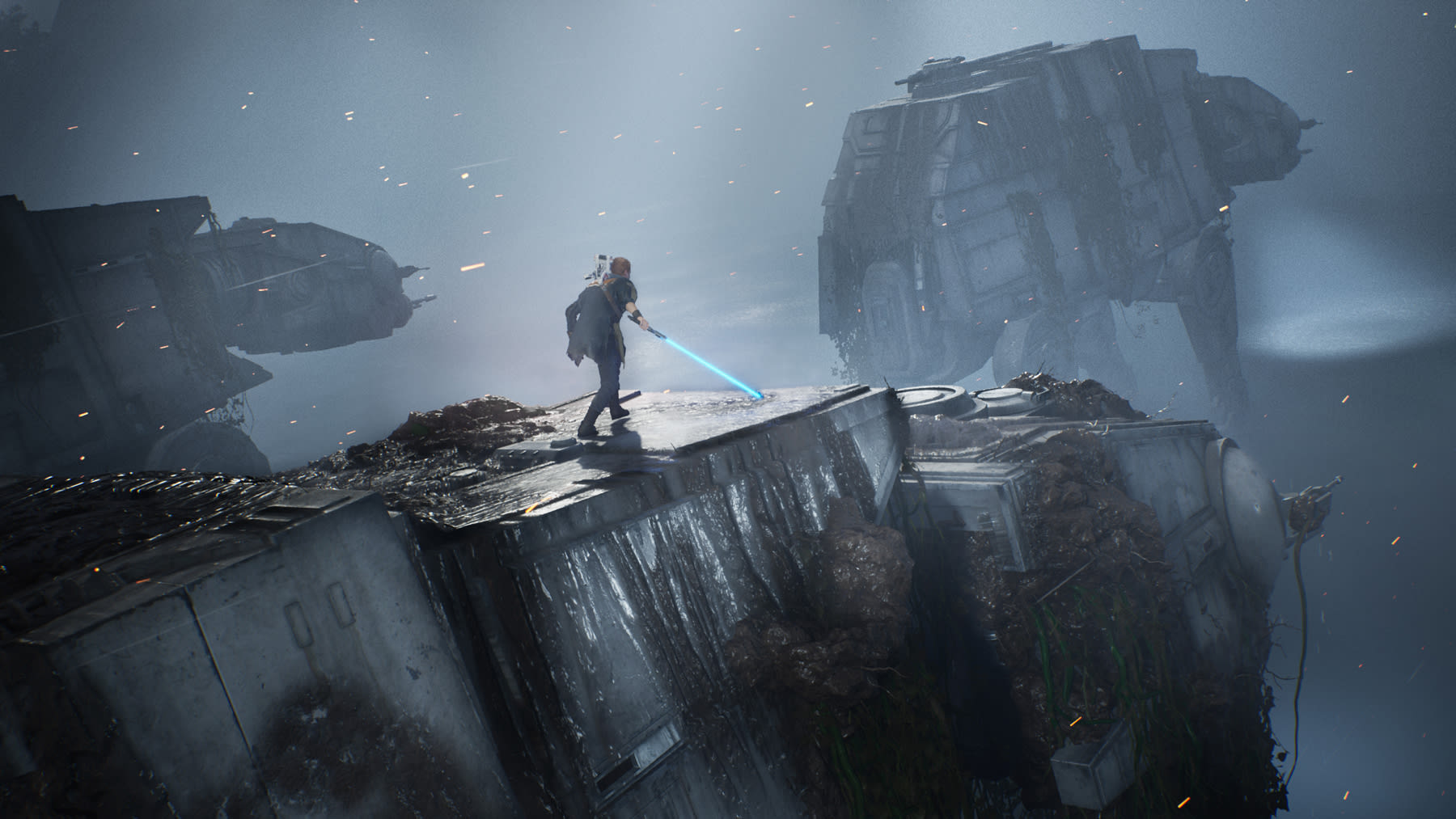 That heritage can be felt every time Kestis swings his lightsaber. Respawn Entertainment was able to work with audio assets crafted by Lucasfilm and DICE, another EA-owned studio, for its multiplayer-focused Battlefront games. In Jedi: Fallen Order, though, the legendary weapon is used in ways that have never been shown or explored on screen before. During the extended demo, for instance, Kestis walks through a section of pitch-black forest. He immediately turns on his lightsaber and holds it horizontally like a glowstick. "The core of it is still the classic lightsaber sound," Laviers said. "We just add some extra elements in."

The sound in Jedi: Fallen Order also needs to compliment and, if possible, strengthen other projects that are set in between episodes three and four. Respawn has, for instance, created a theme for Saw Gerrerra. "That's incredibly satisfying," Laviers said. "Because he's a character that has been around in the Star Wars universe. He's popped up a bunch of times and now he's got a music theme. Obviously, what we're secretly hoping that if anybody else does something with Saw Gerrera in it, that they'll use our music theme." 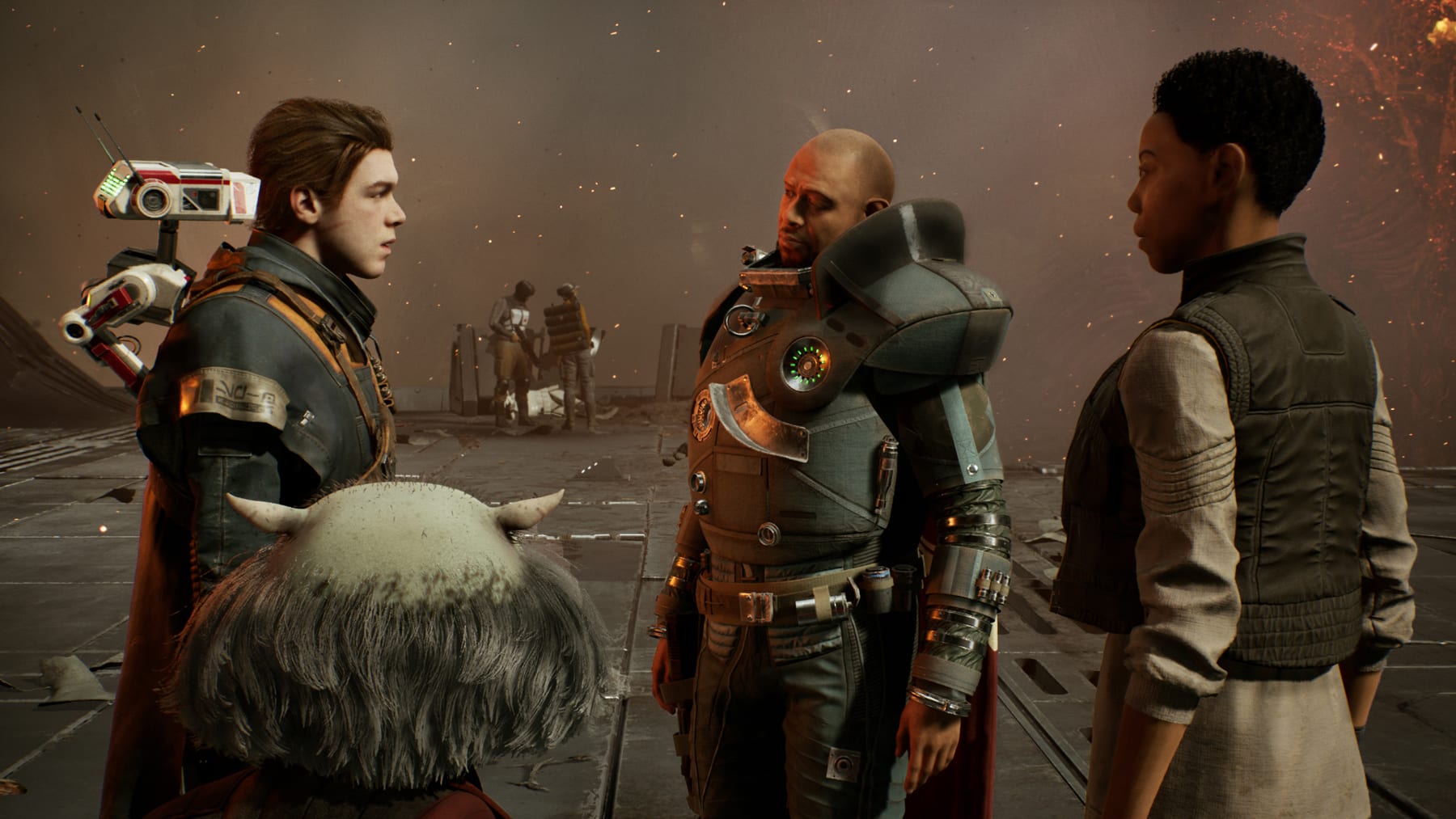 Everything in Jedi: Fallen Order feels like a balancing act. A story that bounces between swashbuckling action, buddy comedy and a dark, depressing war saga. Visuals and sound that pull from the original Star Wars trilogy and, occasionally other projects set before A New Hope, like Rogue One. It all comes together in a package that, for now, feels tonally complex and narratively unique.

Lucasfilm has, unfortunately, stopped developing one-shot movies that take place before episode four. Jedi: Fallen Order is evidence, though, that the time period still has plenty of storytelling potential. We're all excited for Rise of Skywalker, the third movie starring Rey, Finn and Kylo Ren, but Respawn is proving that the past can be just as exciting for Star Wars fans.