Control a fake Tesla while charging your real Tesla

It's easy to get caught up in the drama of Tesla. The weirdness runs the gamut from Robo-taxis, to CEO Elon Musk's bizarre tweets, vehicle demand, manufacturing tents, and investor events. But if we step back for a moment, it's worth reminding ourselves that it's a company that enjoys having fun.

Tesla's vehicles have an array of goofy Easter Eggs. From fart noises to Atari video games, the company isn't afraid to fly its freak flag. So it was no real surprise when the world found out that Tesla would be adding more games and that an SDK would be available for developers to port their own titles to the cars.

The latest game to appear in the dash of Teslas is Beach Buggy Racing 2. A Mario Kart-esque racer that's gotten some tweaks specifically for the Tesla. Specifically, the cars in the game are Teslas (the owner's model and color no less) and you have the ability to choose Spaceman as a character, the space suit SpaceX shot into space in February of 2018. 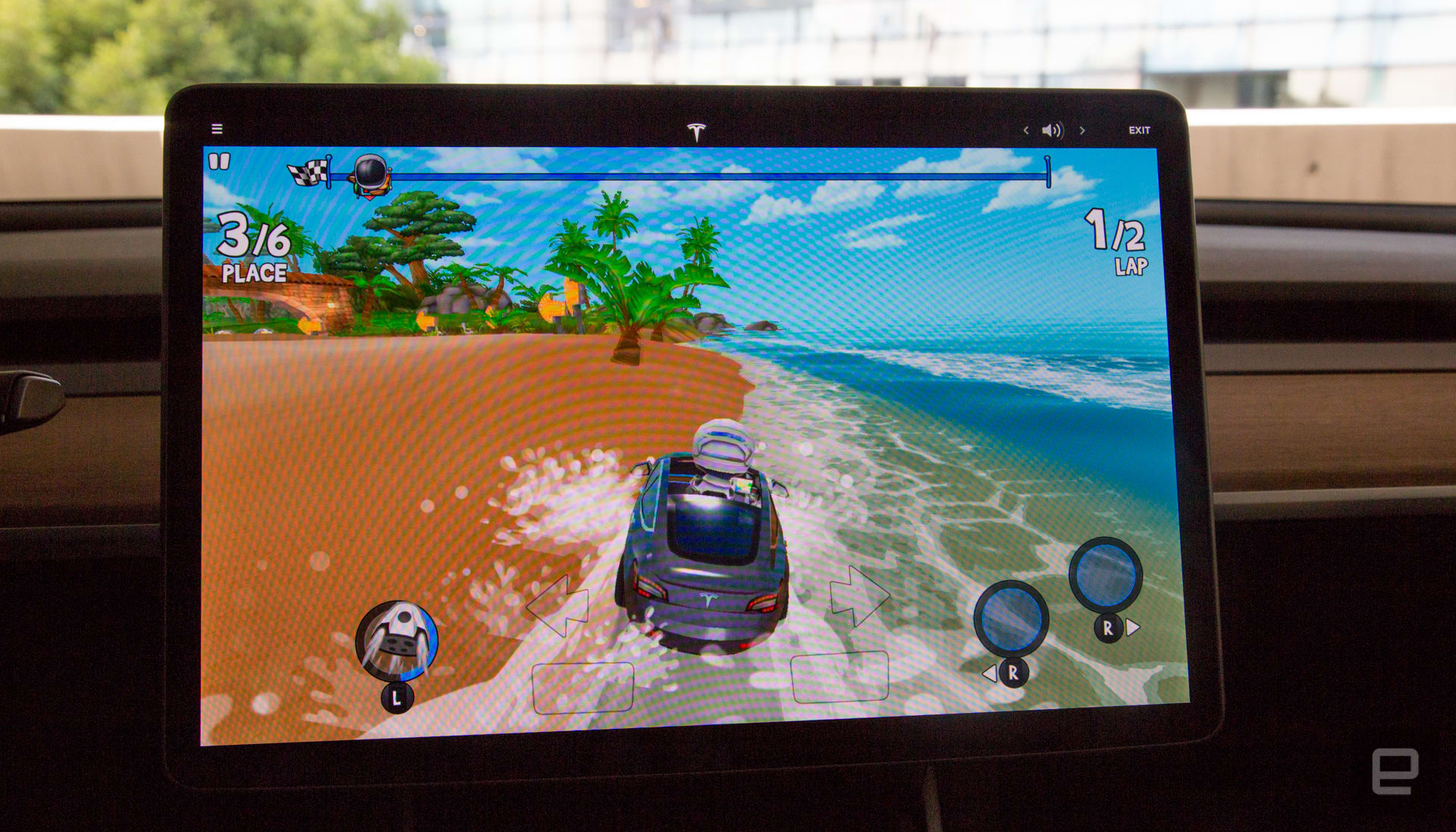 I had a chance to sit in a Model 3 and enjoy a few virtual laps. I had a blast. Using a real steering wheel makes all racing games better. The video the company put out showing Spaceman playing the game used some creative license on the amount of turning your real-world wheels do while playing the game. In reality, it's not enough to be concerned about unless you have a new concrete driveway and you don't want black marks on it.

That would, of course, mean you're playing the game at your home when really it's meant to be played while you're waiting to charge your car. Anyone that drives an EV knows the deal. You plug in your car and either you wander off to a nearby store, coffee shop, restaurant, or abandoned warehouse full of evil spirits, or you sit in your car and wait. You could play games on your phone (or worse, browse Twitter), but Beach Buggy Racing 2, is more engaging.

Porting the game to the Tesla only took a few days, according to the CTO of Vector Unit (the maker of the game) Ralf Knoesel. It helps that Tesla's infotainment system is Linux-based and the company already has ports of the Beach Buggy Racing 2 on similar platforms.

For the Tesla version, in addition to using the steering wheel, the brake pedal is in play. The vehicles in the game are always at full acceleration, so you depress the brake to slow down and even initiate a drift. I'm not a fan of braking, so I kept running into walls. It also didn't help that I initially chose a difficult track and location at the outset.

But after a few tries and after toning down the difficulty and picking a beginner track I was doing better. Like most games, there are additional levels and drivers to unlock as you get better. And you can even play two players via split screen (the passenger has to use on-screen controls). The driver can use them too, but they're nowhere near as fun as using the steering wheel.

More games are headed to a Tesla near you including side-scroller Cuphead. Fortunately, you can use a USB gamepad to play so you're not turning a wheel to go forwards and back. Plus, there's already the Atari games onboard. 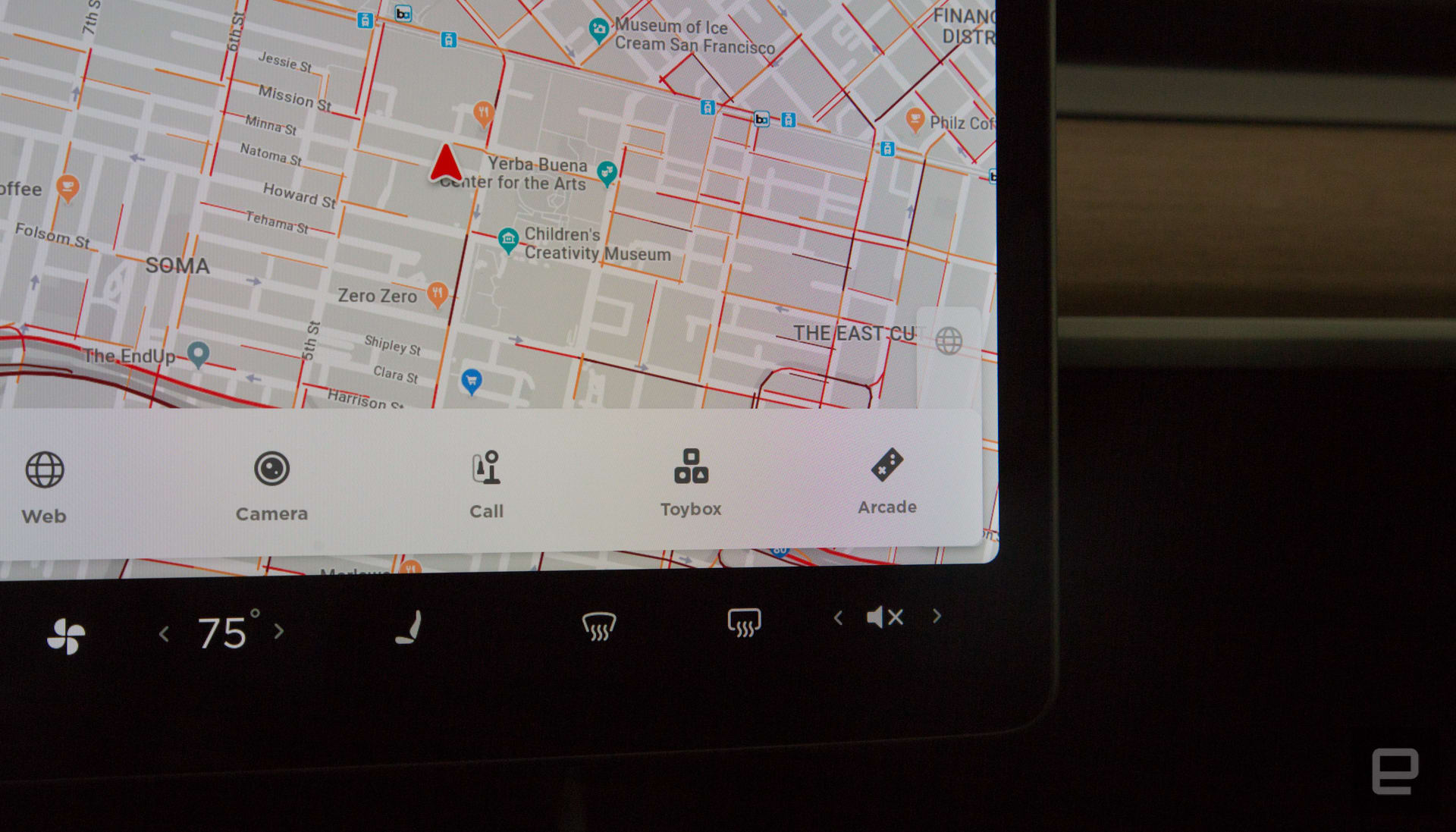 I rarely play video games. I'm usually too busy to just sit down, fire up a console or launch a game. But when I drive EVs, that downtime at the charger? That's an opportunity. Sure I could call my family or learn a second language, but I think driving on the beach is the better option.