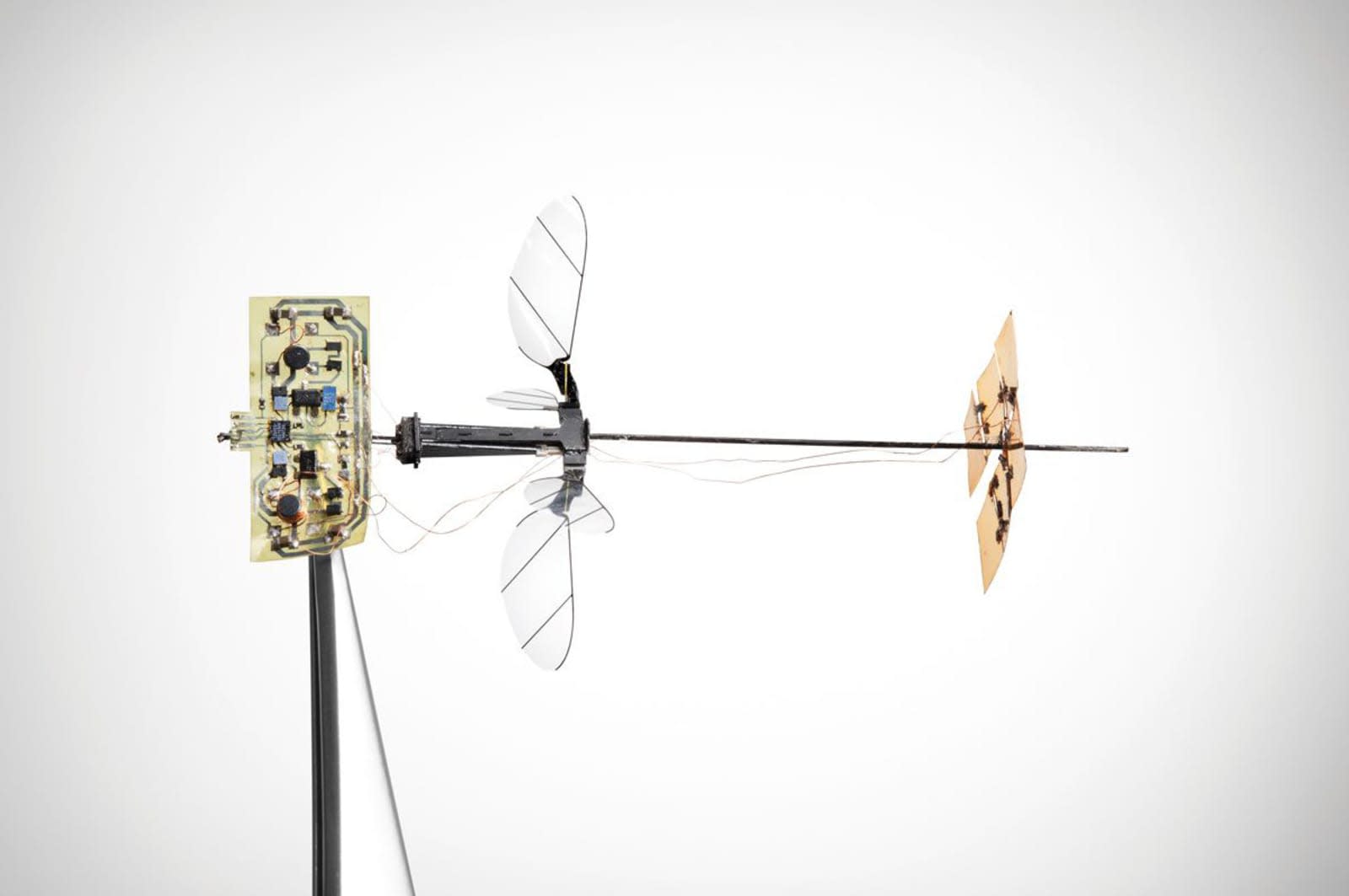 RoboBee X-Wing, the latest version of Harvard's robotic bee, has four wings instead of two -- more importantly, it can fly on its own without the need for a power tether. Researchers from Harvard's Microrobotics Laboratory have been working on the RoboBee for a while now. They've made it smaller and lighter, and they've given it more and more features such as the ability to fly in and out of water over the years.

This version is only one-quarter the weight of a paper clip, but it still needs the extra lift provided by its two extra wings to carry its on-board electronics and six tiny solar cells. Since the robot is untethered unlike other similar robotic insects, it gets its power from the sun -- or from powerful lamps, which the researchers used during their tests.

The solar cells generate 5 volts of electricity, and a small onboard transformer turns it into the 200 volts of electricity the RoboBee needs to lift off. That voltage causes the bee's piezoelectric actuators to bend and contract like the real insect's muscles would, leading to the flapping motion of the robot's wings.

Even though the X-Wing doesn't need a tether, it still can't be deployed in real missions. For one, it requires light three times the intensity of our sun to be able to generate the power it needs. In addition, it doesn't work when it's not directly under the light and could only fly for a second or two during testing until it veers out of view. The researchers need to equip it with a power storage solution so it can fly in the dark. Problem is, that would make it heavier.

According to IEEE Spectrum, the team is now working on a version that's 25 percent larger and can harness power from a light source that's "only" 1.5 more intense than our sun. Hopefully, they can figure out how to give RoboBee the capability to harness power from our sun as it is and to store energy for later use.

Winged robots are more agile and maneuverable than those that use propellers. They're also quieter and won't injure or damage the people and objects they come in contact with. If the Harvard researchers can find a way to make RoboBee work on our planet and in the dark, it could be the perfect robot for search and rescue operations and environmental exploration.

In this article: gear, harvard, RoboBee X-Wing, robots, tomorrow
All products recommended by Engadget are selected by our editorial team, independent of our parent company. Some of our stories include affiliate links. If you buy something through one of these links, we may earn an affiliate commission.