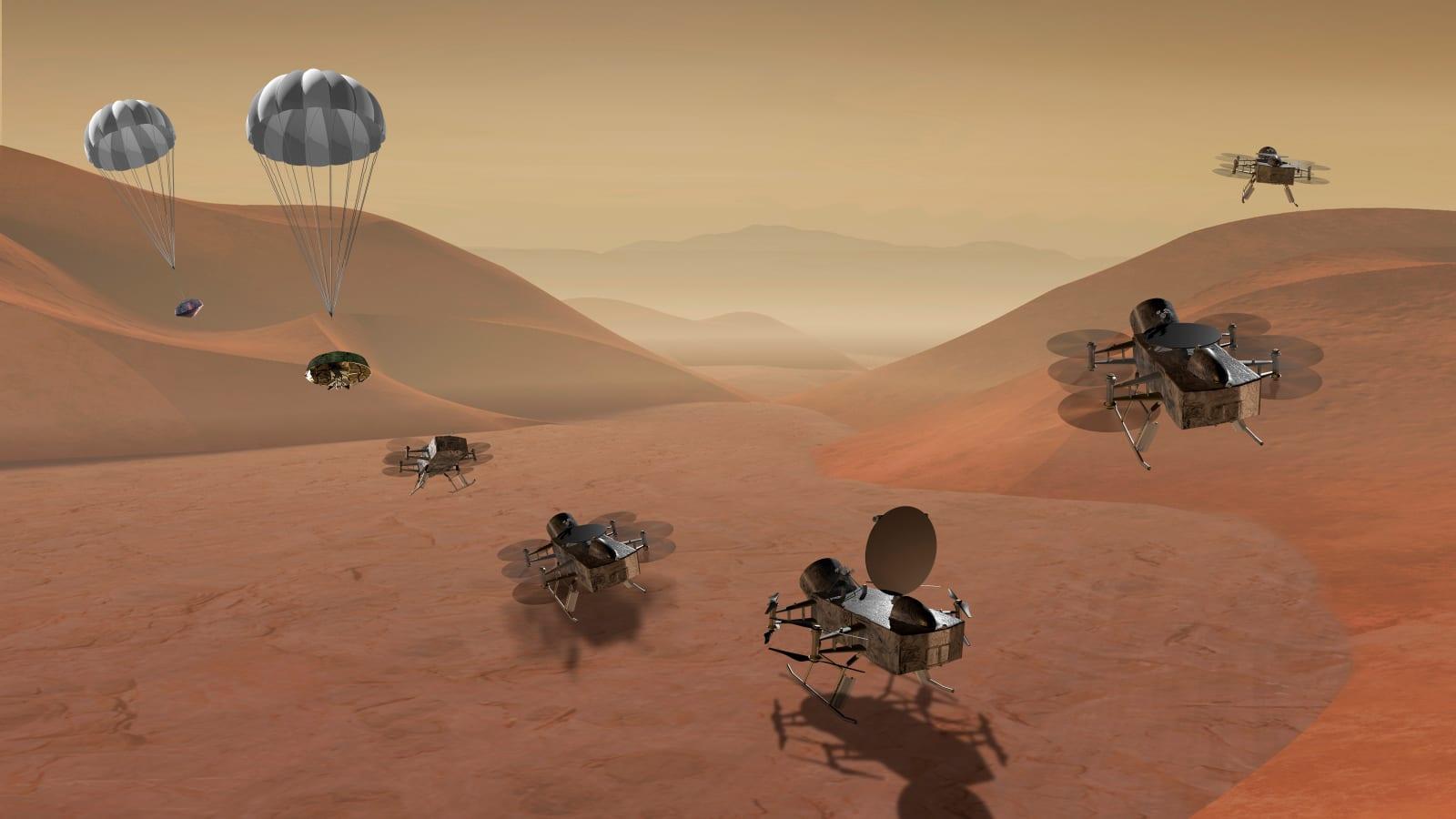 NASA announced today its next big mission to explore our Solar System. The agency has greenlit a mission called Dragonfly that will send a spacecraft to the surface of Titan, Saturn's largest moon. Dragonfly, the latest of NASA's New Frontiers program, was selected because of Titan's unique makeup, which makes its one of the more promising candidates for discovering signs of microbial life.

BIG NEWS: The next @NASASolarSystem mission is... #Dragonfly – a rotorcraft lander mission to Saturn's largest moon Titan. This ocean world is the only moon in our solar system with a dense atmosphere & we're so excited to see what Dragonfly discovers: https://t.co/whePqbuGBq pic.twitter.com/BQdMhSZfgP

Dragonfly is scheduled to launch in 2026, a slight delay in the originally planned launch window of 2025. It will spend nine years in flight, covering 840 million miles before finally making a two-hour decent to the surface of Titan. Once it lands, the dual-quadcopter will spend 2.7 years making short flights of up to 5 miles around the moon. Those flights will occur about once every Titan day, which is about 16 Earth days. The drone will be able to travel at about 20 miles per hour and reach altitudes as high as two miles. By the time its baseline mission is complete, the drone will have covered 108 miles, nearly double the distance traveled by all Mars rovers combined.

During its travels, Dragonfly will make stops to collect samples from compelling regions of Titan. Elizabeth Turtle of Johns Hopkins University Applied Physics Laboratory, said dune fields on the moon are particularly attractive areas for an explanation because "The material in the sand particles may be widely sourced," meaning the drone could pick up materials from across the moon beyond where it will be able to explore.

Dragonfly's baseline mission will conclude when it reaches an impact crater known as Selk. According to Turtle, the crater is at a low-latitude and should be accessible to the drone. "We know this area quite well, there's a lot of data from different instruments in this region," she said. Turtle called the crater a "high-priority target" because it's a place where "organics and liquid water may have mixed in the past." It's believed that liquid water and complex organic materials including hydrogen, oxygen and nitrogen -- the building blocks of life -- may have existed together for tens of thousands of years.

LIVE NOW: We're announcing the next mission to study our cosmic neighborhood! Join us for a special edition of #NASAScience Live to learn about our next @NASASolarSystem explorer & ask ?s using #askNASA: https://t.co/4MvJdNylml

Dragonfly is the fourth mission launched through the New Frontiers program, which NASA uses to fund particularly ambitious space exploration missions throughout the Solar System. Prior missions include New Horizons, which flew by Pluto in 2015 and continues to explore the Kuiper Belt beyond it; Juno, which ventured to Jupiter and is currently continuing its mission to collect data from the gas giant; and OSIRIS-REx, which began orbiting the near-Earth asteroid Bennu earlier this year.

In this article: dragonfly, dragonfly mission, drone, lander, NASA, saturn, space, spacecraft, titan, tomorrow
All products recommended by Engadget are selected by our editorial team, independent of our parent company. Some of our stories include affiliate links. If you buy something through one of these links, we may earn an affiliate commission.