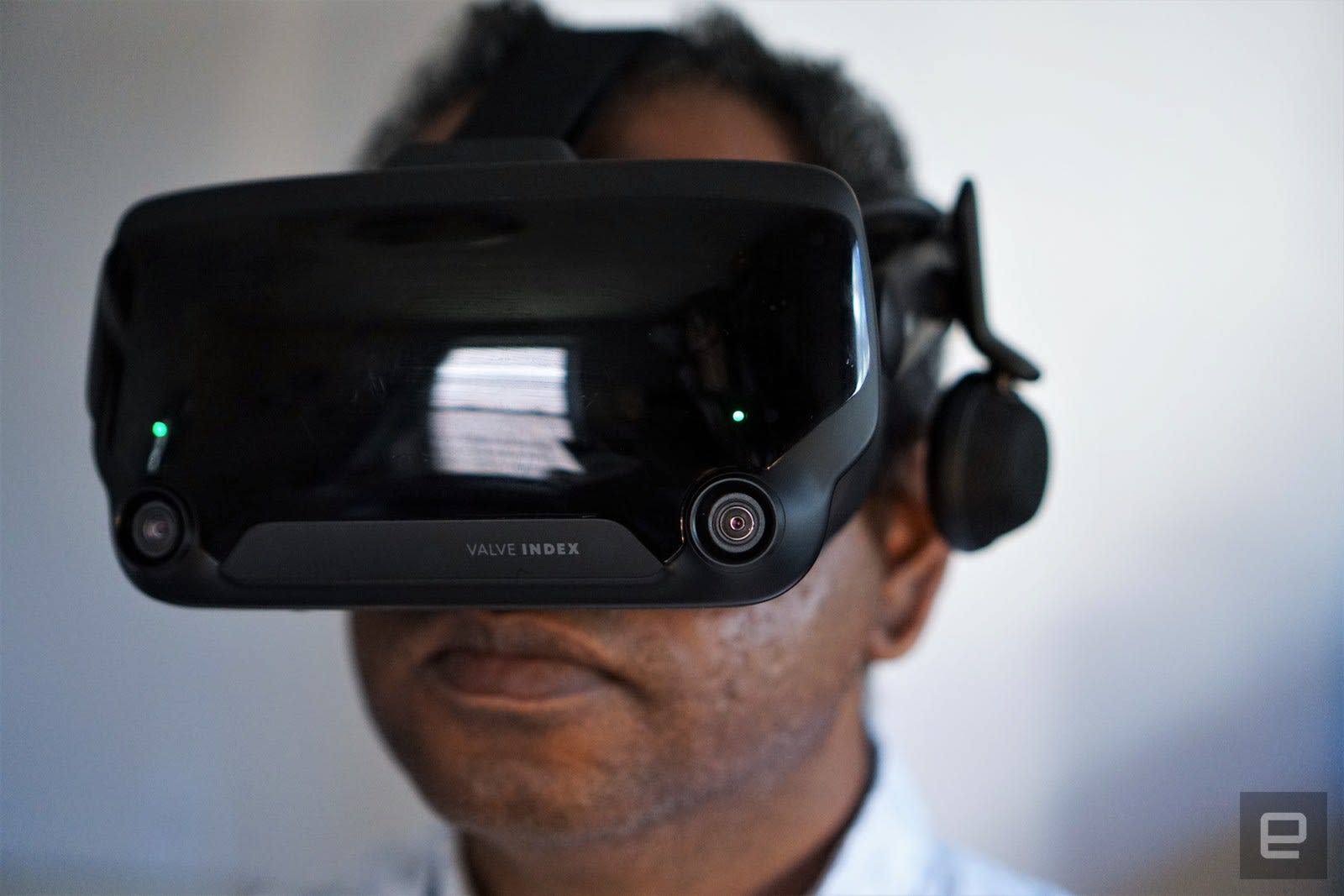 It has almost everything we’d want from a PC VR headset.

Where does virtual reality go next? Right now there seem to be two paths: portable and self-contained headsets like the Oculus Quest or those connected to computers and consoles like the Rift and PlayStation VR. Valve is clearly betting on the second way with the Index, its first VR hardware. It crams in just about every feature you'd expect from a high-end headset, including some truly transformative finger-sensing controllers.

It's too bad the entire Index package costs $999, putting it out of reach for most people. But maybe that's the point. It's a boundary-pushing headset meant to keep the VR industry from getting stale.

But before we get to the Index itself, we have to talk about the controllers. Valve has been testing them for years under the code name "Knuckles," which refers to their key feature: finger tracking. They don't look anything like the Oculus Rift or HTC Vive's motion gamepads: Instead of holding them, you have to slide your fingers under a microfiber strap, which secures the controller to your hand. 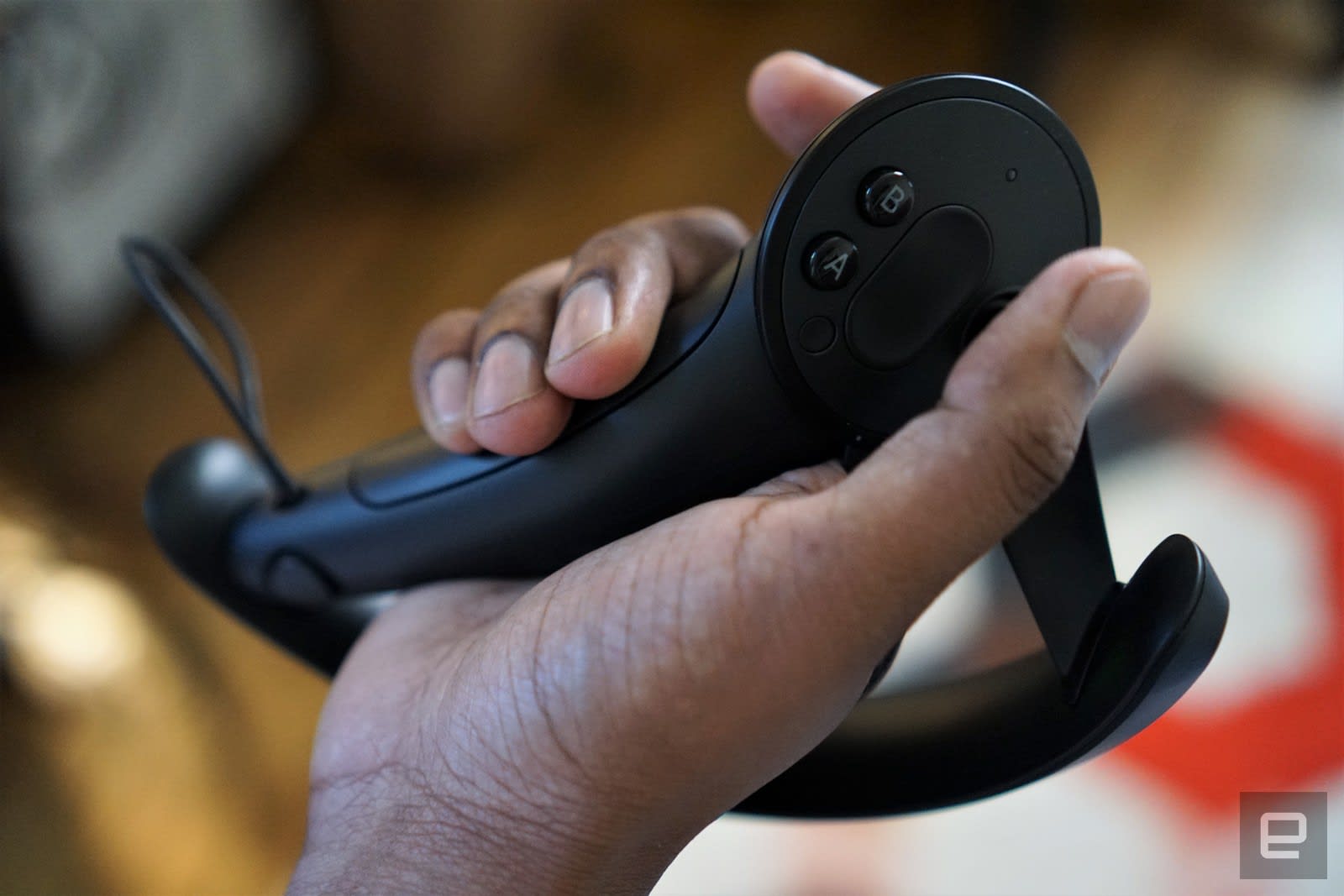 They rely on 87 sensors to track your finger movements, which opens the door for new types of VR interactions. Games can tell if you're holding your thumbs up or if you're waving to another character. The mere act of grabbing and holding things in VR feels more real with the Index controllers, since you're actually gripping them with your hands. There's also pressure sensitivity, which lets games detect when you're squeezing extra hard. And better haptics support also gives you the sensation of touching and holding objects.

None of that was possible with earlier VR gamepads, since they just have a single grip button for opening and closing your hands. As you can imagine, having true finger tracking goes a long way toward improving VR presence -- the sense of being transported to a virtual world when you're wearing a headset. Beyond finger sensing, the Index controllers have an analog stick, two face buttons, a trackpad and of course, a trigger button. They're backwards compatible with every game that works with the Vive's controllers, but it's up to developers to build in finger-tracking support.

So far, that only includes around 40 games like Space Pirate Trainer, Arizona Sunshine and Superhot, but hopefully more will follow as devs get their hands on the new controllers. And even though they're debuting with the Index, the gamepads are also compatible with the Vive and Vive Pro. You'll just have to shell out $279 to grab them separately. 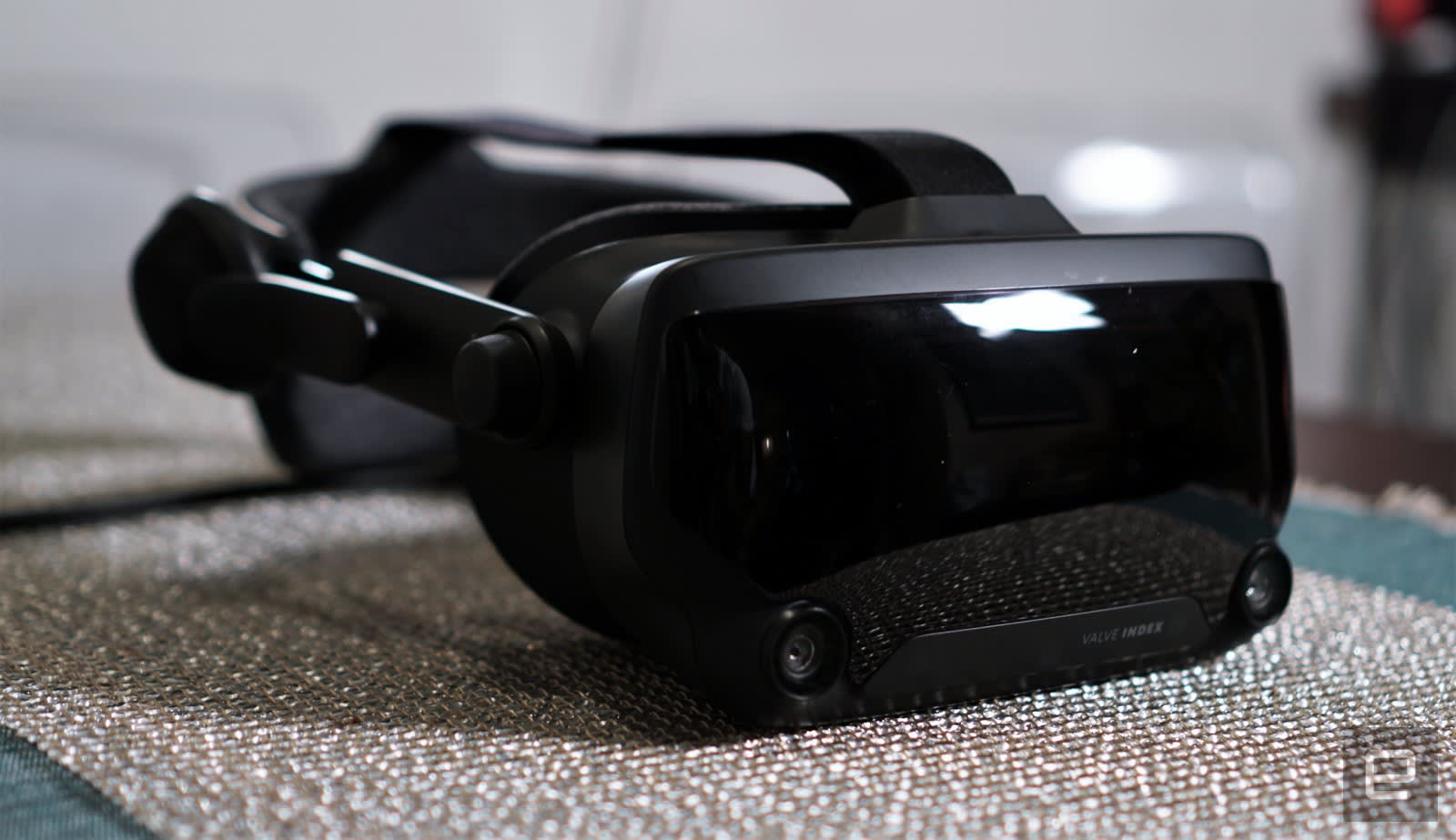 As for the Index headset itself, it doesn't look much different than the Rift or Vive. But there are some notable upgrades once you dig a bit deeper. There's a huge emphasis on comfort here: The head strap is easy to put on, and you can secure it by turning a dial. There's no awkward velcro to fight with, like you'd find on the Rift and Vive.

A generous amount of plush cushioning covered in breathable microfiber cloth surrounds the eyepiece and rear head strap. There's also a dial to adjust the distance of the lenses to your eyes, which is particularly helpful if you're wearing glasses. And instead of headphones, the Index has two near-field speakers, which produce high-quality sound without even touching your ears. 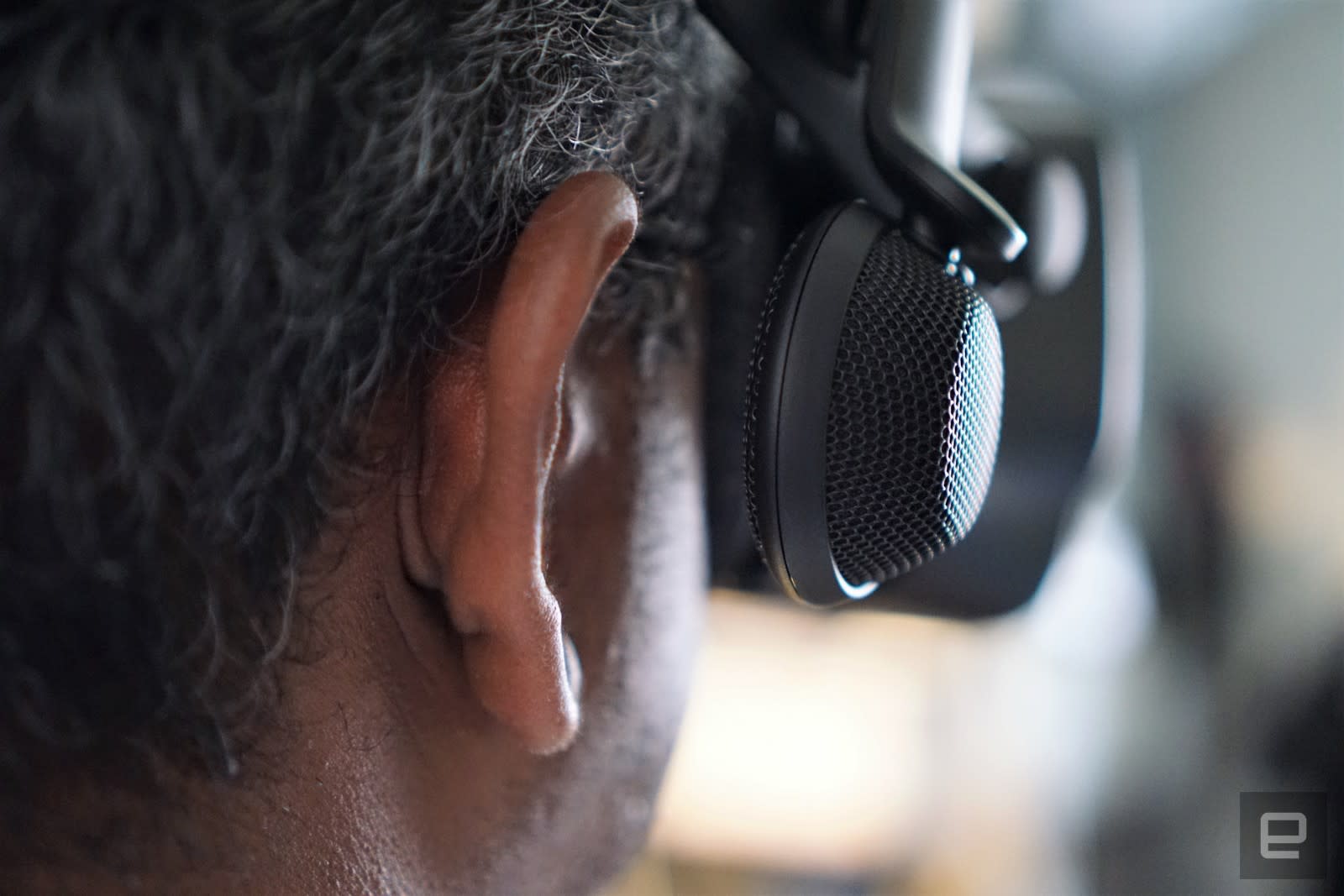 Valve claims it wanted to make a headset that you could wear for hours without feeling fatigued, and it seems like it succeeded. The Index feels well balanced on my head, with none of the front heaviness that annoyed me on the wireless Oculus Quest.

As you'd expect, there's a ton of high-end tech inside the Index. It features two RGB LCDs each running at 1,440 by 1,600 pixels instead of the lower-resolution OLED panels on first-gen headsets. Valve says its LCDs feature 50 percent more subpixels, which means they'll look even sharper than an OLED panel at the same resolution.

The new displays can also run at 120Hz or 144Hz, a huge leap beyond the 90Hz refresh rate we've seen on most headsets. A higher refresh rate means your VR experience will look smoother -- assuming your computer can actually reach the higher frame rates required. The Oculus Rift S, the company's most recent half-hearted stab at a PC headset, actually scaled down its refresh rate to 80Hz from the original Rift's 90Hz. While Oculus is more focused on making its tech cheaper and easier to consume, Valve is taking the exact opposite approach. 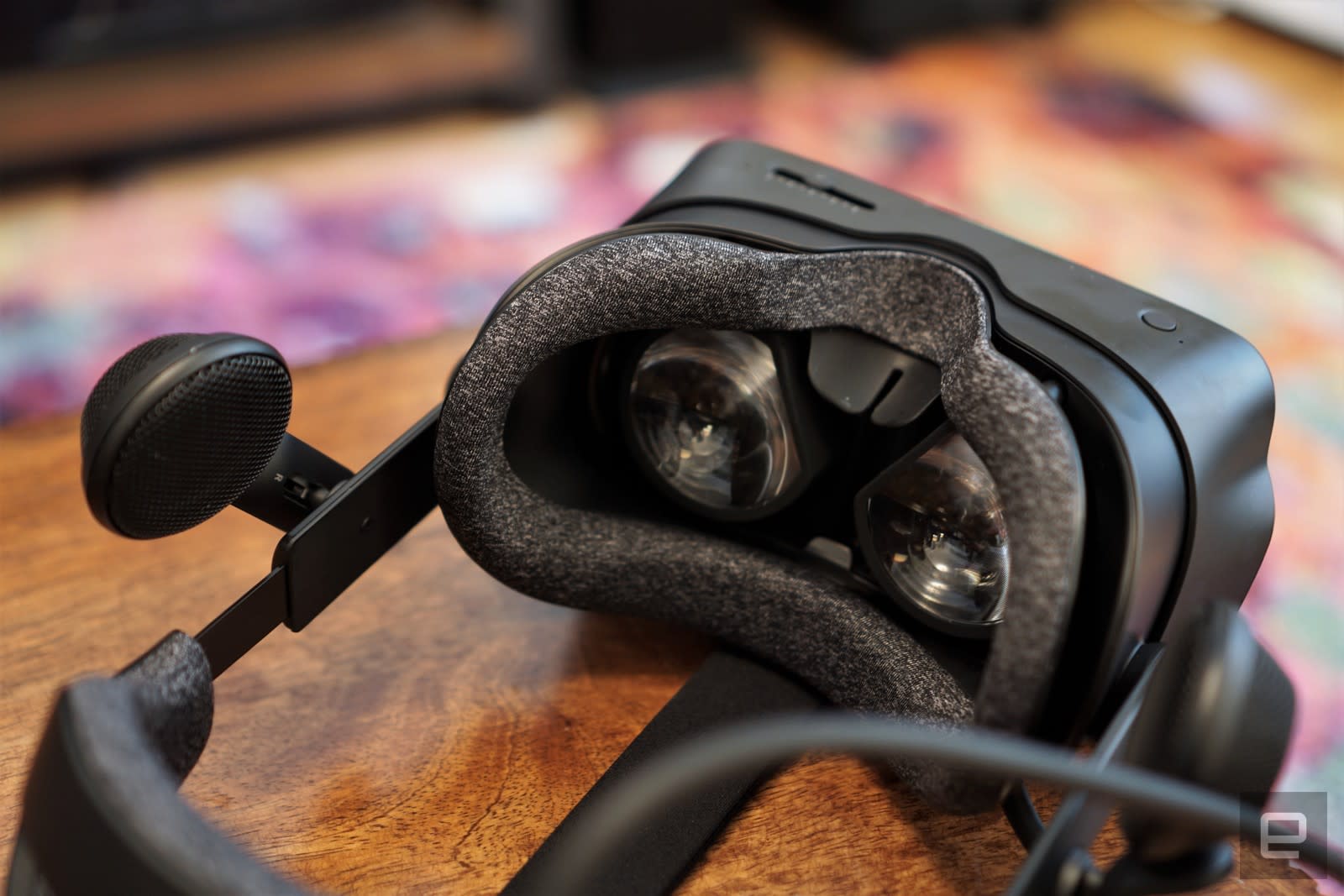 The Index also offers far better image persistence than first-gen headsets: Everything you see will still look sharp when you're moving your head around (something you're always doing in VR). Most noticeably, Valve bumped the Index's field of view to 130 degrees, 20 degrees more than other consumer headsets. That means even more of the virtual world will envelope you. You won't get any of the periscope effect you find on cheaper headsets, which makes it seem like you're peeking through a tiny window.

Up front, the Index has two cameras and a notch with a USB 3.0 port hidden underneath the faceplate. Valve calls this the frunk, an accessory slot that developers can use however they see fit. Reality Instruments is already using it to add LED displays in front of the Index. 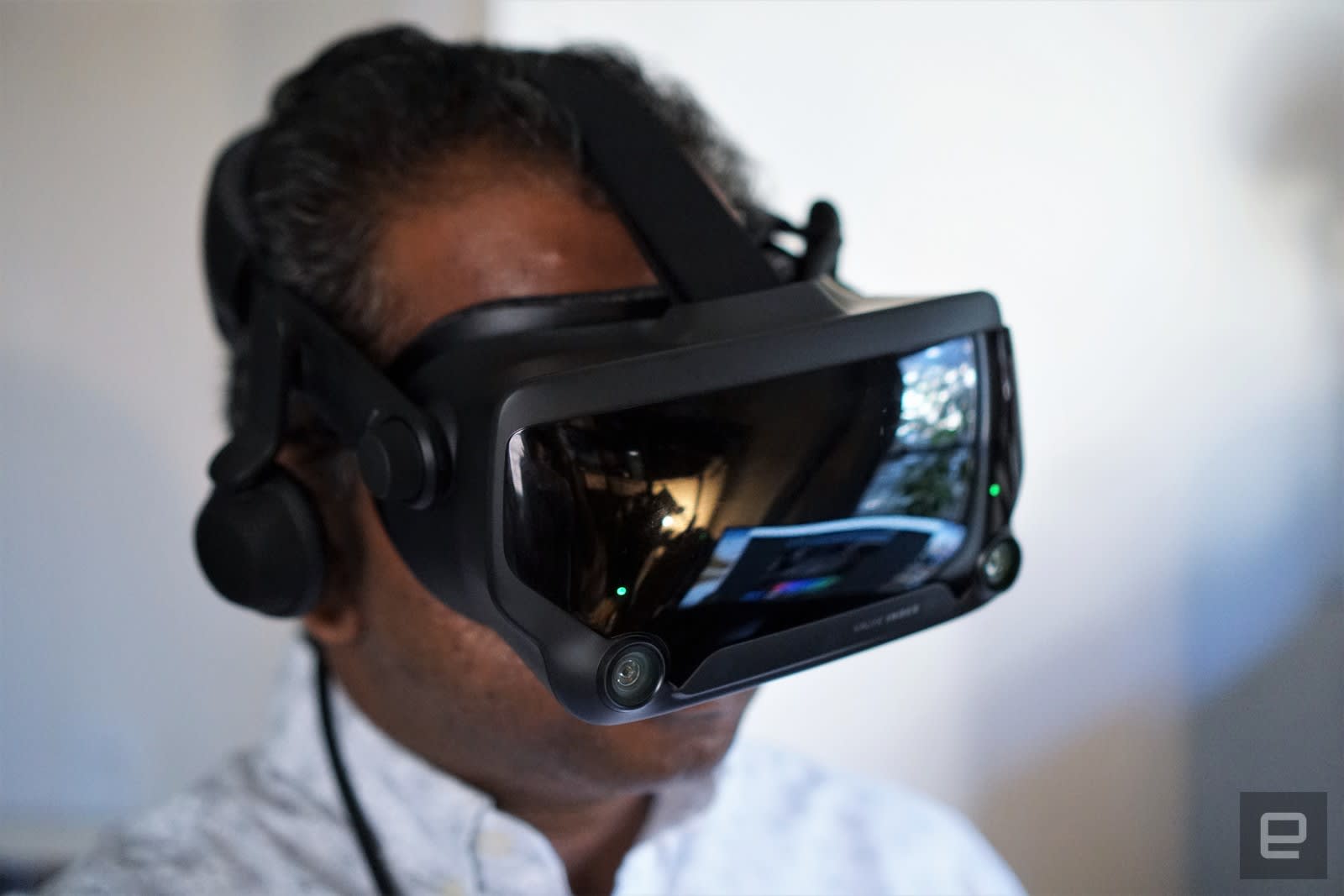 For all of its whiz-bang new features, the Index is still a wired PC headset that relies on external sensors. That means it has many of the downsides of the Vive: Setup is a chore, since you need to find a high location for the two base stations, and you have to plug the headset into DisplayPort, USB 3 and power. Thankfully, Valve made the cable detachable, so you can remove the Index headset while leaving the plugs connected to your computer.

Once everything is connected, you also have to draw a boundary around your play space for room-scale gaming. But if you're low on space, you can still use it in seated and standing mode, though that will keep you from playing some titles that are room-scale only. Since the Index is a SteamVR headset, the entire setup process is the same as the Vive's. The only difference is that I manually had to enable the 120Hz refresh rate in its settings.

So how well does the Index actually work? I've tested every major VR headset, including most of the flagship Windows Mixed Reality offerings, and the Index stands apart. Valve has crafted a headset that's comfortable while also delivering the most immersive virtual reality experience I've ever seen. That's partially due to all the tech crammed into the headset, but the new controllers play an even bigger role.

Running through the hilarious Aperture Hand Lab demo instantly sold me on finger tracking: It starts with some simple gestures like waving at a smart-alecky robot but quickly escalated into a game of rock, paper, scissors and an awkward handshake competition. Throughout the experience, I wasn't focused on pressing any buttons; it all centered on how my hands and fingers were interacting with virtual space.

The addition of finger tracking also made Superhot, my favorite VR title, even better. Now grabbing guns out of the enemy's hands and taking aim for a headshot feels far more visceral. I'm shocked how much finger tracking alone makes a game I know well seem completely new. Imagine what developers could accomplish when they plan for finger tracking from the beginning. Both Space Pirate Trainer and Beat Saber also show off how well the Index handles motion tracking. It never lost sight of my controllers as I was shooting space baddies and hitting best boxes, something I often had trouble with on the Vive and Vive Pro. Chalk that up to vastly improved lighthouse sensors. 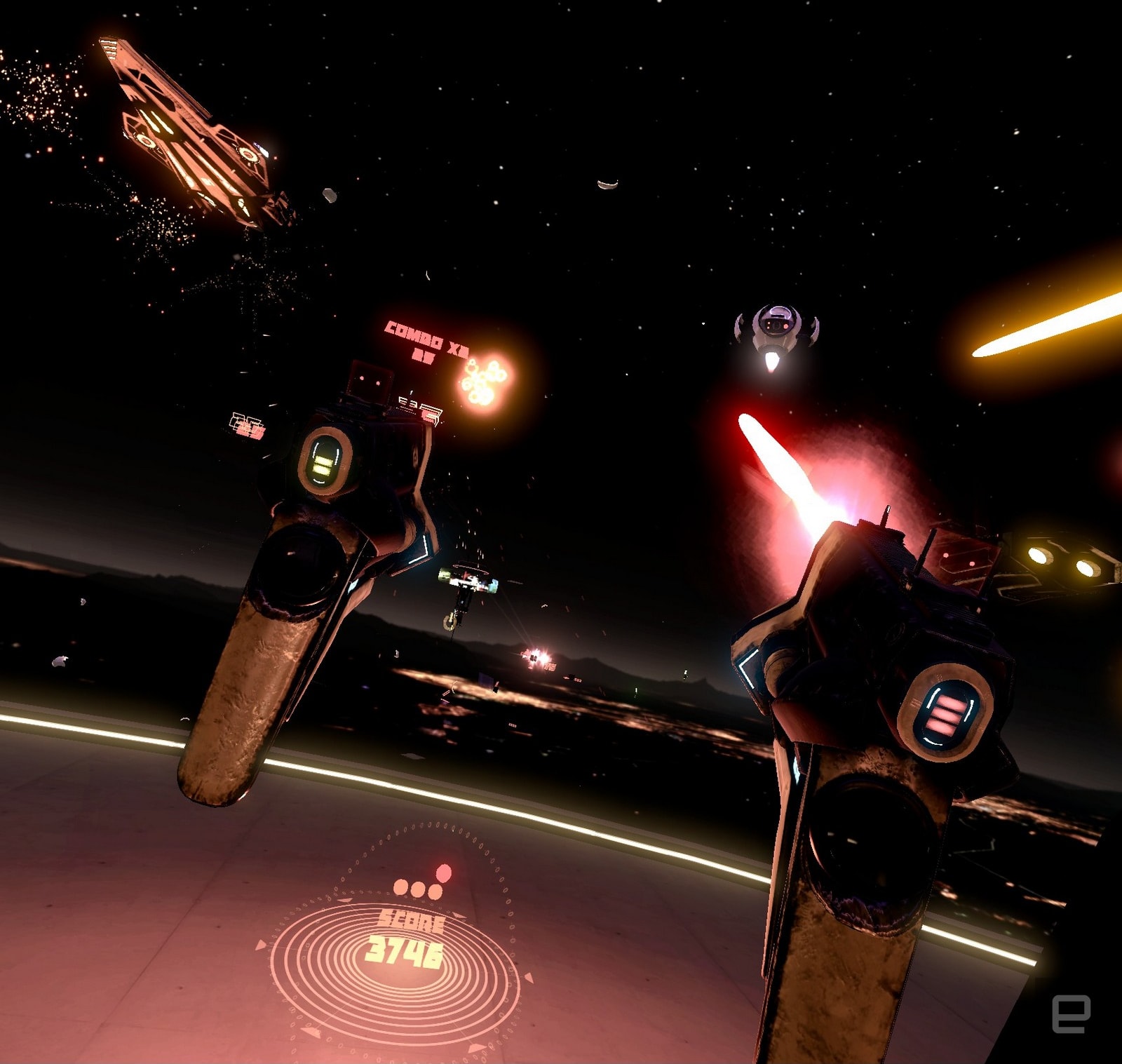 The visual upgrades in the Index also make mainstay VR experiences like Google Earth feel much more immersive. I honestly felt a bit of vertigo as I rotated the globe beneath me and flew above Rio de Janeiro. Hopping into 360-degree Street View felt almost like I was teleporting around the globe. The Index's faster refresh rate also made fast-paced games like Space Pirate Trainer feel much more realistic. I dabbled with the 144Hz refresh rate, but it felt less stable than the 120Hz option and didn't look noticeably better.

Even though it's the cream of the crop for high-end VR, there's still some room for improvement with the Index. For one, I'd love to see a wireless accessory. That was a huge upgrade for the Vive, especially when it came to VR immersion. Of course, I'd expect that to be even tougher with the Index's high-resolution screens. I also hope Valve moves toward built-in sensors eventually. Every recent VR headset has baked in sensors: They simplify setup and make it far easier to move your headset to another location. External lighthouses inevitably trap you in a single space. 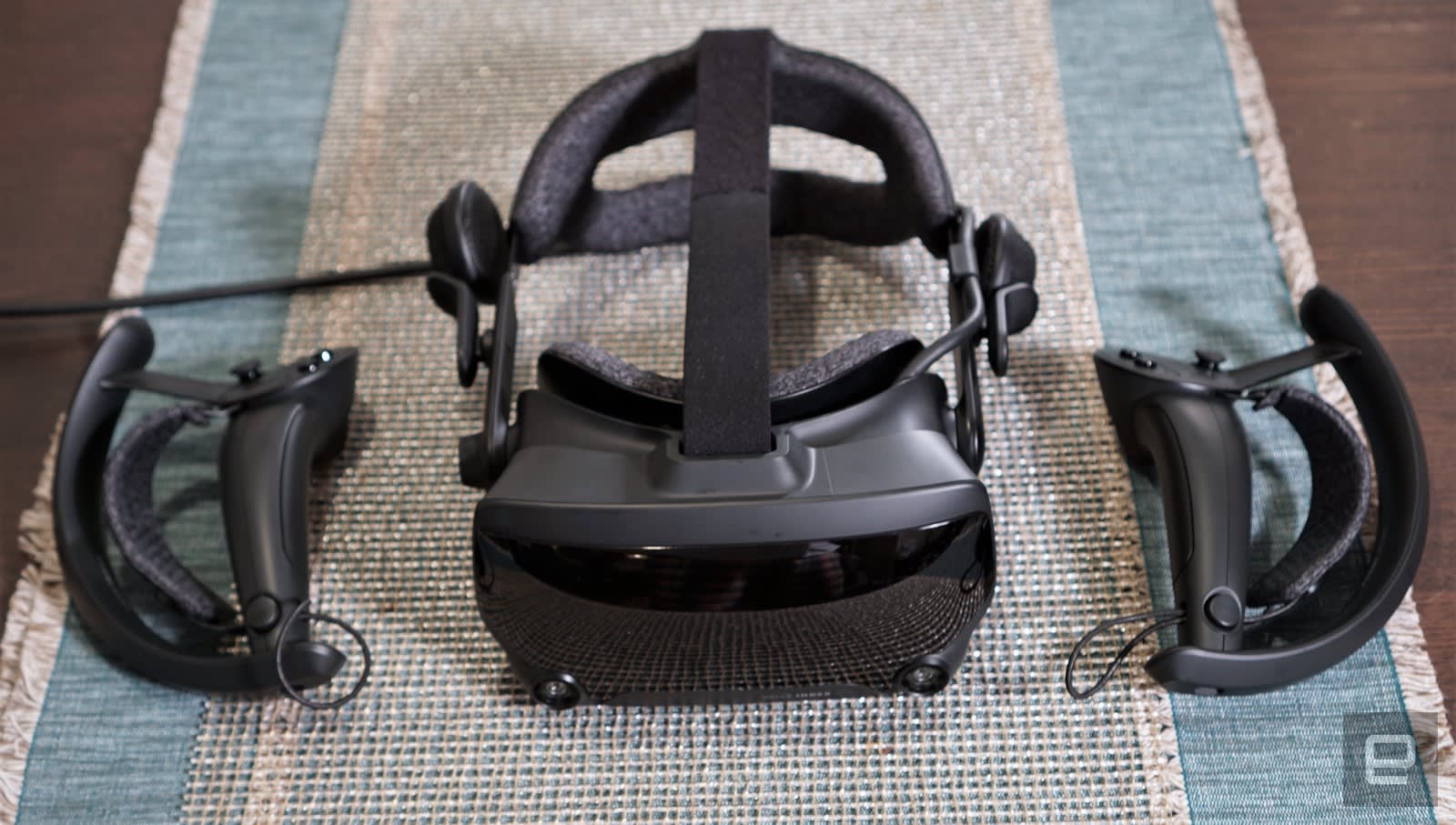 Now for the big question: Who should actually buy the Index? Clearly, it's not meant for everyone. At $1,000, it's not even vaguely affordable, especially when other headsets like the Rift S and Windows Mixed Reality entries are going for $400 or less. (Vive Pro owners can also nab the headset and controllers for $749 and use their existing base stations.) The Index is an expensive and aspirational piece of gear meant for professionals and geeks who need the best.

For regular folks, it's something to seek out the next time you're at a VR arcade. The Index's controllers alone are groundbreaking, and hopefully they'll pave the way for more finger-tracking competition. 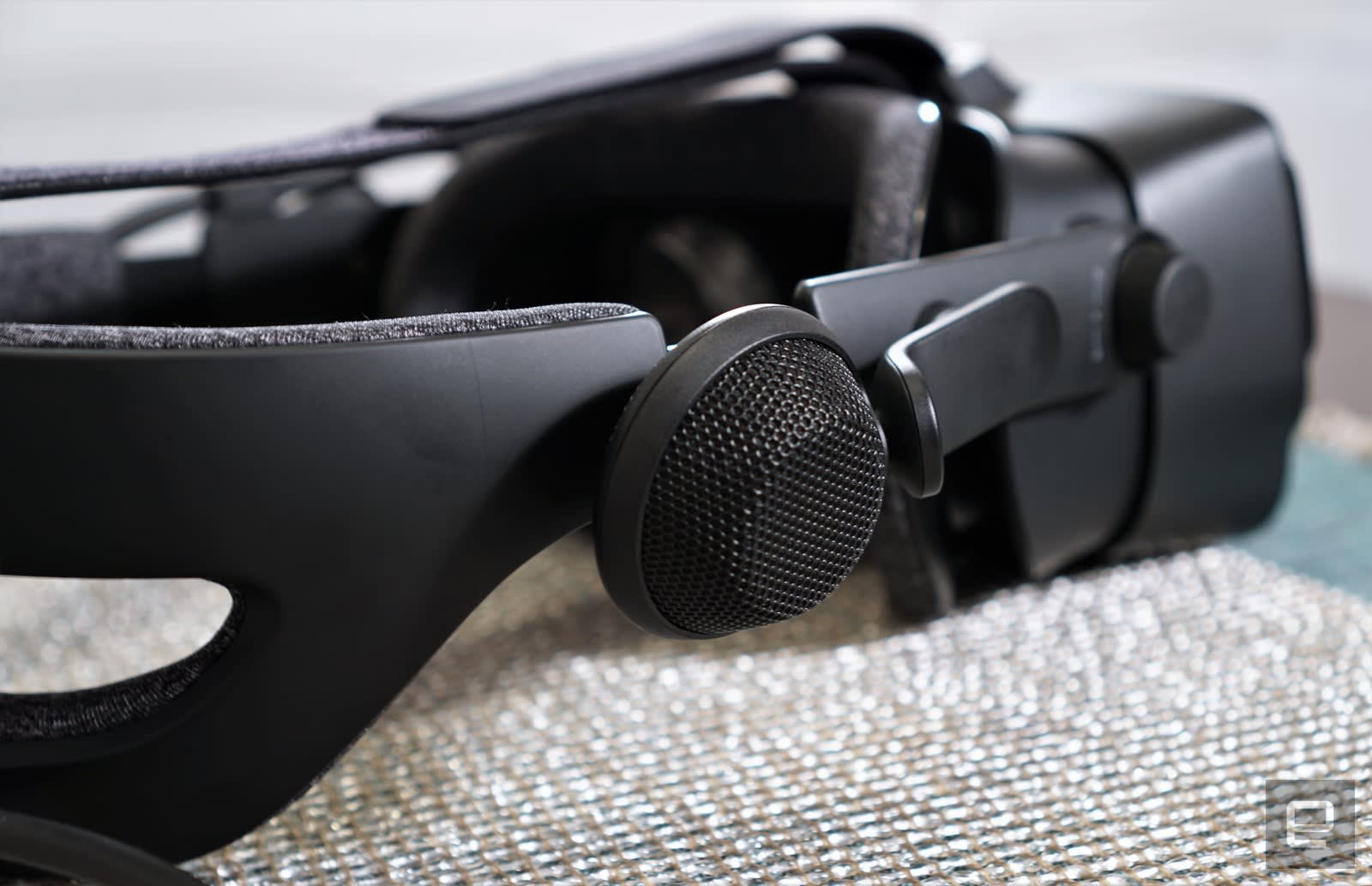 At the least, Valve is reminding us that there's still a place for high-end VR. The Oculus Quest might be cheaper and more convenient, but it'll always be limited by its mobile hardware. With the Index, the VR possibilities seem endless.

All products recommended by Engadget are selected by our editorial team, independent of our parent company. Some of our stories include affiliate links. If you buy something through one of these links, we may earn an affiliate commission. All prices are correct at the time of publishing.
View All Comments
Valve Index review: Next-level VR