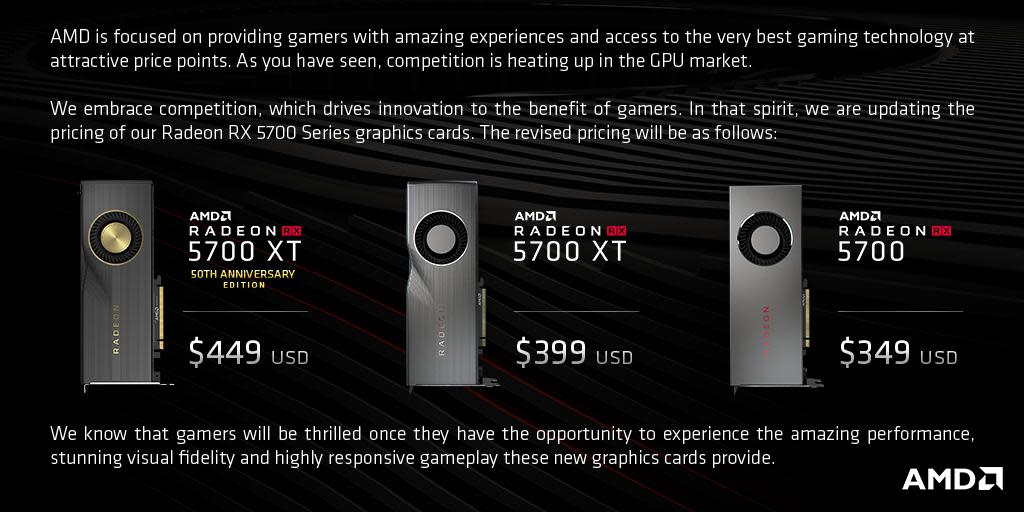 AMD unveiled its new Radeon RX 5700 line of graphics cards with 7nm chips at E3 last month, and with just days to go before they launch on July 7th, the company has announced new pricing. In the "spirit" of competition that it says is "heating up" in the graphics market -- specifically NVIDIA's "Super" new RTX cards -- all three versions of the graphics card will be cheaper than we thought.

That's enough to keep them both cheaper than the $499 RTX 2070 Super -- we'll have to wait for the performance reviews to find out if it's enough to make sure they're still relevant.

AMD embraces competition, which drives innovation to the benefit of gamers. In that spirit, we're updating the pricing for Radeon RX 5700 Series graphics cards. pic.twitter.com/L1ZbCUSi9z

In this article: amd, gaming, gear, GPU, Navi, NVIDIA, personal computing, personalcomputing, pricing, Radeon RX 5700, Radeon RX 5700 XT, rdna, thebuyersguide, Radeon 5700
All products recommended by Engadget are selected by our editorial team, independent of our parent company. Some of our stories include affiliate links. If you buy something through one of these links, we may earn an affiliate commission.