When NVIDIA and AMD go to war, consumers win.

For once, AMD made NVIDIA sweat. NVIDIA's new RTX Super graphics cards are clearly a response to AMD's new midrange GPUs, the Radeon RX 5700 and 5700 XT. For months, AMD has been hyping how much faster they are than the first RTX cards. The only solution for NVIDIA was a surprise batch of faster cards, which, in turn, led to AMD announcing a price drop at the last minute. Witness the capitalist ideal of competition in action.

What makes them special?

As we explained when they were announced, the RTX Super cards are basically souped-up versions of NVIDIA's existing lineup. They're taking the place of the faster "Ti" cards we're used to seeing from the company (though, confusingly enough, the 2080 Ti is sticking around as the king of the RTX hill). They're not meant to be upgrades for people who jumped on last year's cards -- they're more like a reward for those who waited. 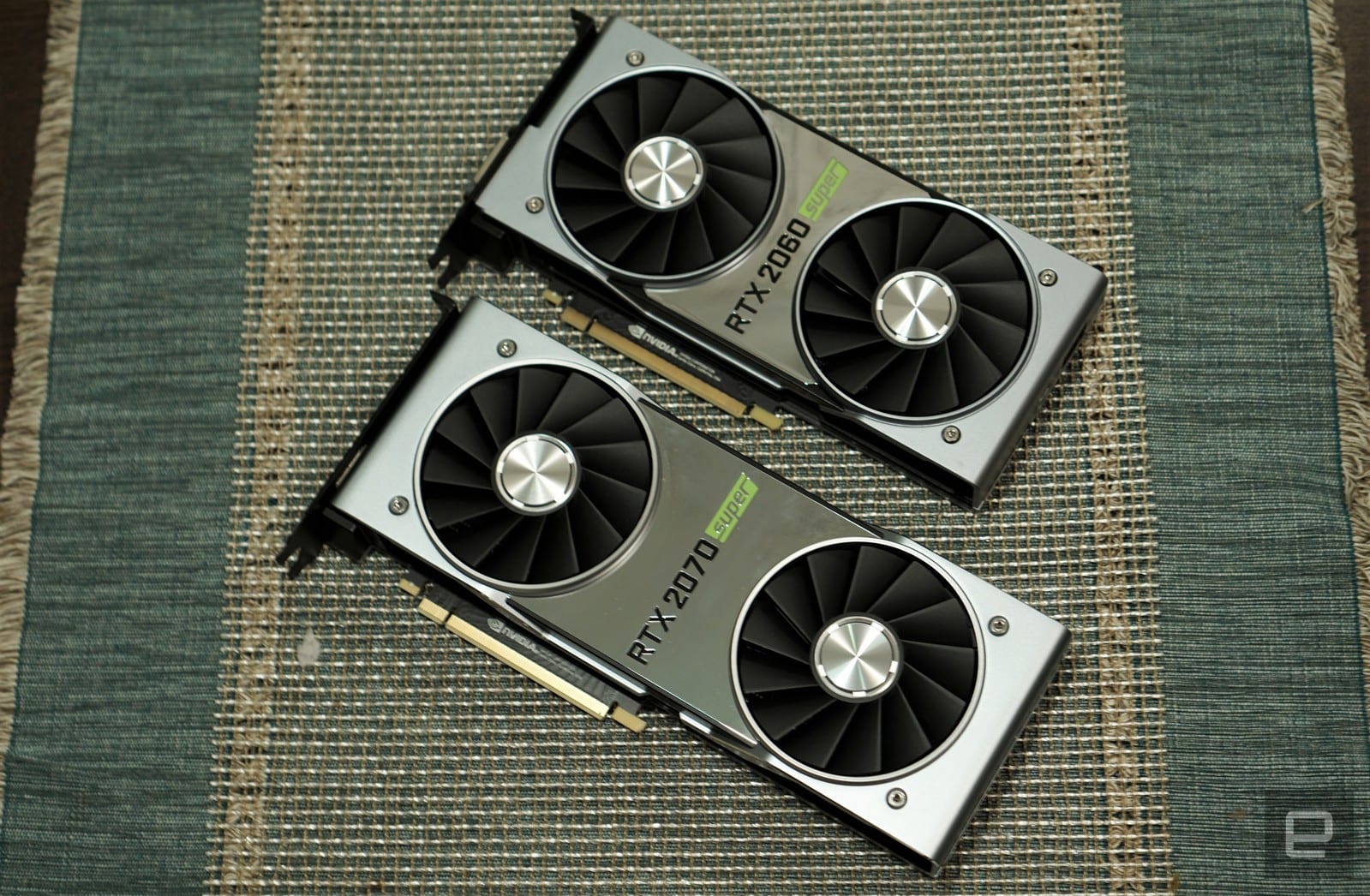 The $399 RTX 2060 Super is more in line with the previous RTX 2070 spec-wise, instead of the plain 2060. It now has 8GB of RAM, 256 more CUDA cores (totaling 2,176) and a healthy base clock speed bump up to 1,470MHz instead of 1,365MHz. NVIDIA says the 2060 Super is around 15% faster than the 2060, and it almost keeps up with the original 2070. That's a compelling amount of performance for that price, especially if you don't mind overclocking to eke out a bit more speed. You'll find three DisplayPort connections, an HDMI port and USB-C "VirtualLink" (a single cable to plug in future VR headsets) on both cards.

Both cards also get slightly better ray-tracing performance, though we're still unsure how NVIDIA measures that. The 2060 Super offers 6 Giga Rays -- NVIDIA's term for counting ray-tracing speeds -- instead of five. The 2070 Super, meanwhile gets 7 Giga Rays. In real-world usage, those numbers mean they'll both be able to handle things like realistic reflections, shadows and lighting -- the key features of NVIDIA's RTX real-time ray-tracing tech -- without hurting your framerate as much. 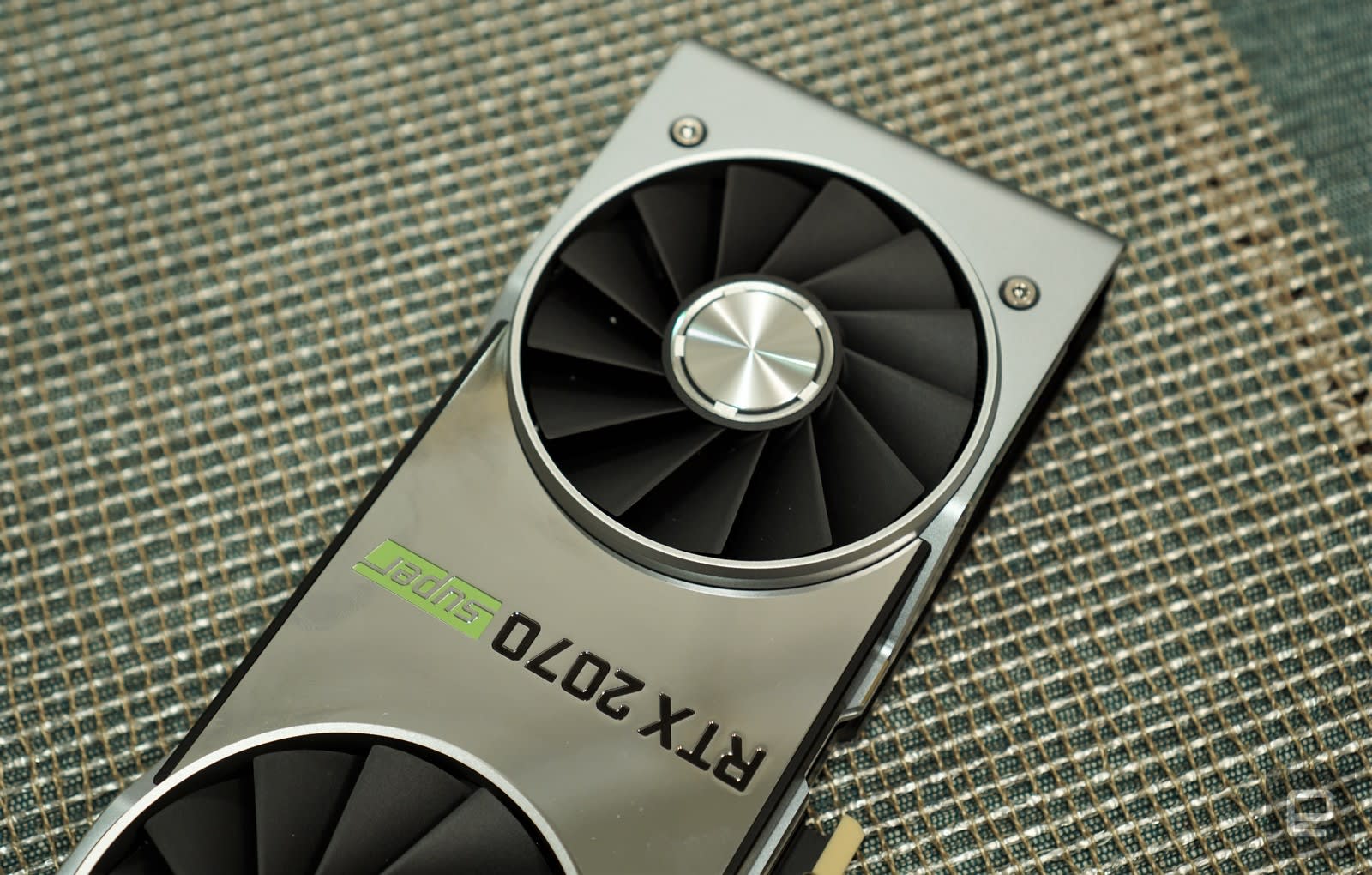 When the RTX cards launched, NVIDIA was criticized for not getting enough developers to jump aboard the ray-tracing bandwagon. But now that we've got coming titles like Cyberpunk, Call of Duty: Modern Warfare, and Watch Dogs: Legion, you'll actually have a reason to invest in ray tracing. The few games that support the feature now, like Battlefield V, rely on it only for simple things, like making sure the sun reflects realistically off of your guns.

But looking ahead, some developers are banking heavily on everything ray tracing offers -- Remedy has been showing off the tech's potential for years with Control. Both Sony and Microsoft have confirmed ray tracing will be in their next-generation consoles (which will be powered by AMD hardware), so it makes sense that game makers are finally starting to take it seriously.

How do they perform?

As we saw in the review of AMD's new Radeon cards, NVIDIA's hardware is unsurprisingly fast. The $399 RTX 2060 Super is about on par with the Radeon RX 5700 XT. In some cases, like 3DMark, it's noticeably better, but NVIDIA's GPU still lags behind in games like Hitman 2. That's the sort of gap that can easily be cleared by driver updates and game optimization, though, so I wouldn't worry about it too much.

What the benchmarks boil down to is this: Both the RTX 2060 Super and RX 5700 XT are solid $399 GPUs, delivering the sort of 1,440p performance you'd expect from high-end cards just a few years ago. You can't really go wrong with either option -- but of course, you'll only get ray tracing with the RTX 2060. The importance of that feature is entirely up to you, and how much you want to future-proof your next video card. At the very least, both offer decent ray-tracing performance. In Shadow of the Tomb Raider, the 2060 Super reached 51 FPS with ultra-ray-tracing settings in 1,440p, while the 2070 Super reached 57 FPS. In my eyes, the slight FPS hit by turning on the feature is worth it for more realistic shadows and lighting. 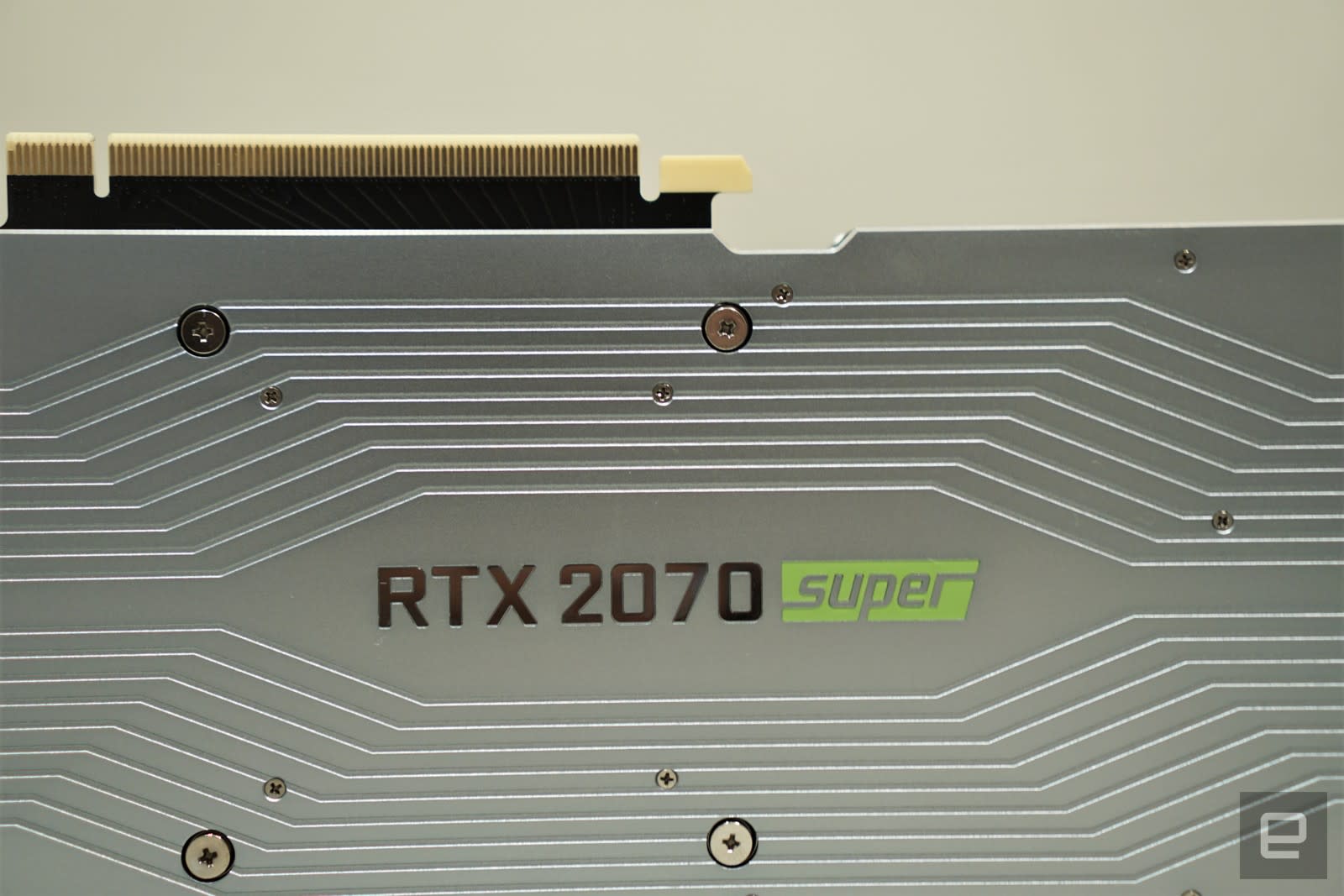 At $499, the RTX 2070 Super is a better bet for enthusiasts. It delivers even faster framerates at 1,440p, which will give you smoother gameplay on high refresh rate monitors (especially if they support G-SYNC too). In some cases, like The Witcher 3, you'll even get 4K speeds close to 60FPS. In all honesty, though, the whole point of getting a card like this is to run 1,440p as fast as you can, with all of the graphical bells and whistles maxed out.

NVIDIA's dual-fan coolers on both GPUs managed heat much better than AMD's single-fan blower design. During benchmarks and gameplay, they maxed out at 82 Celsius. The Radeon cards, meanwhile, consistently warmed up to 90C under load. While AMD will likely get some help from third-party designs, those numbers aren't great if you're concerned with long-term stability and overclocking.

Both NVIDIA and AMD also have $349 GPUs to consider -- the plain RTX 2060 and the Radeon RX 5700 -- which are great performers in their own right. I haven't benchmarked the 2060, but when I reviewed the RX 5700, I was impressed by how effortlessly it jumped beyond 60 FPS in 1,440p. While these cards will save you some money, though, they may limit you if you're trying to take advantage of 120Hz and 144Hz monitors. 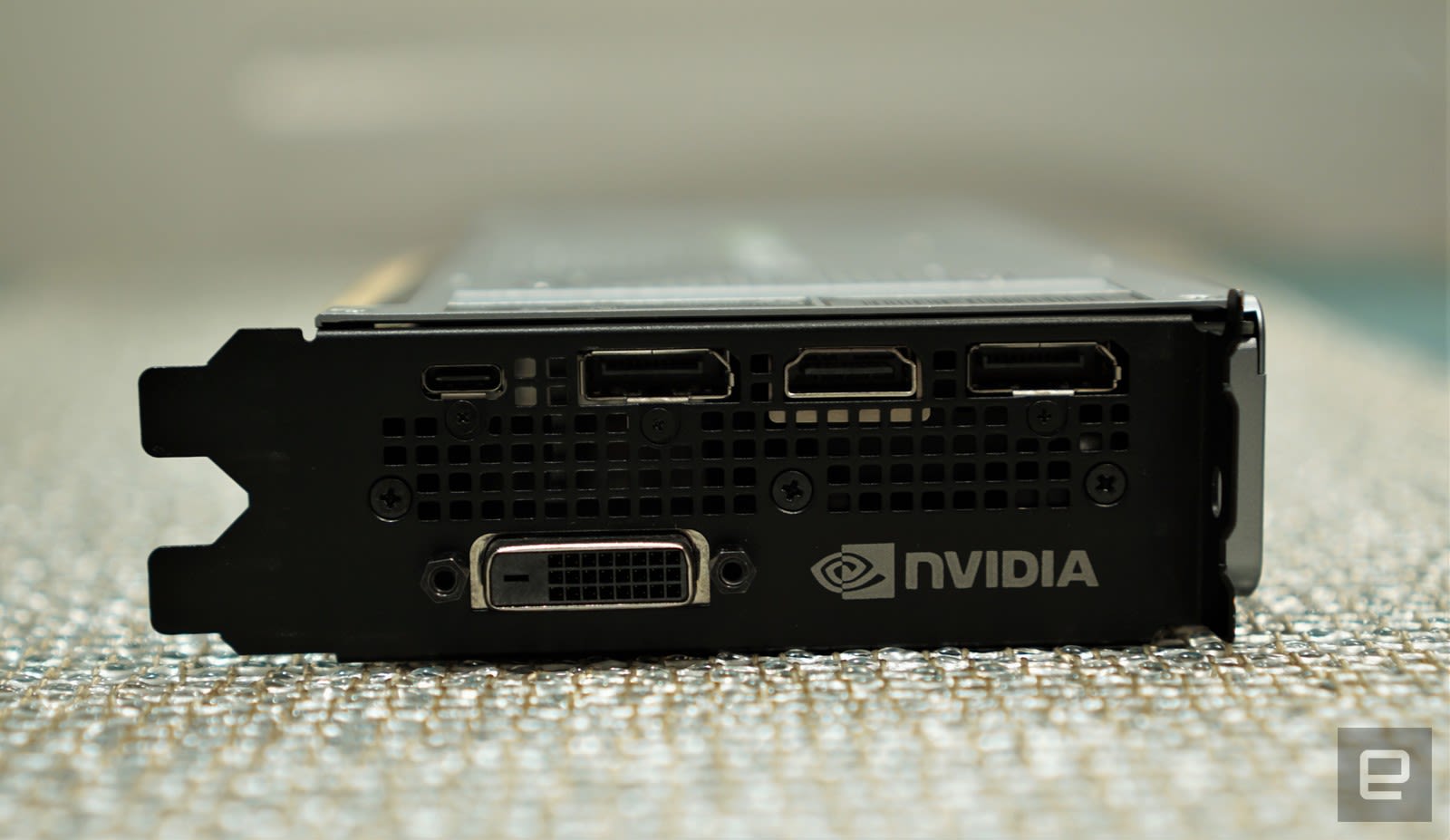 As usual, your budget is the main consideration here. Most gamers would be better off with the $399 RTX 2060 Super and Radeon RX 5700 XT. They'll give you a bit more power to handle demanding next-gen games like Cyberpunk. If you've been dreaming of getting something powerful like the RTX 2080, then the $499 RTX 2070 Super will get you close. And if you're intrigued by ray tracing, your only choice is to pick one of the NVIDIA cards. 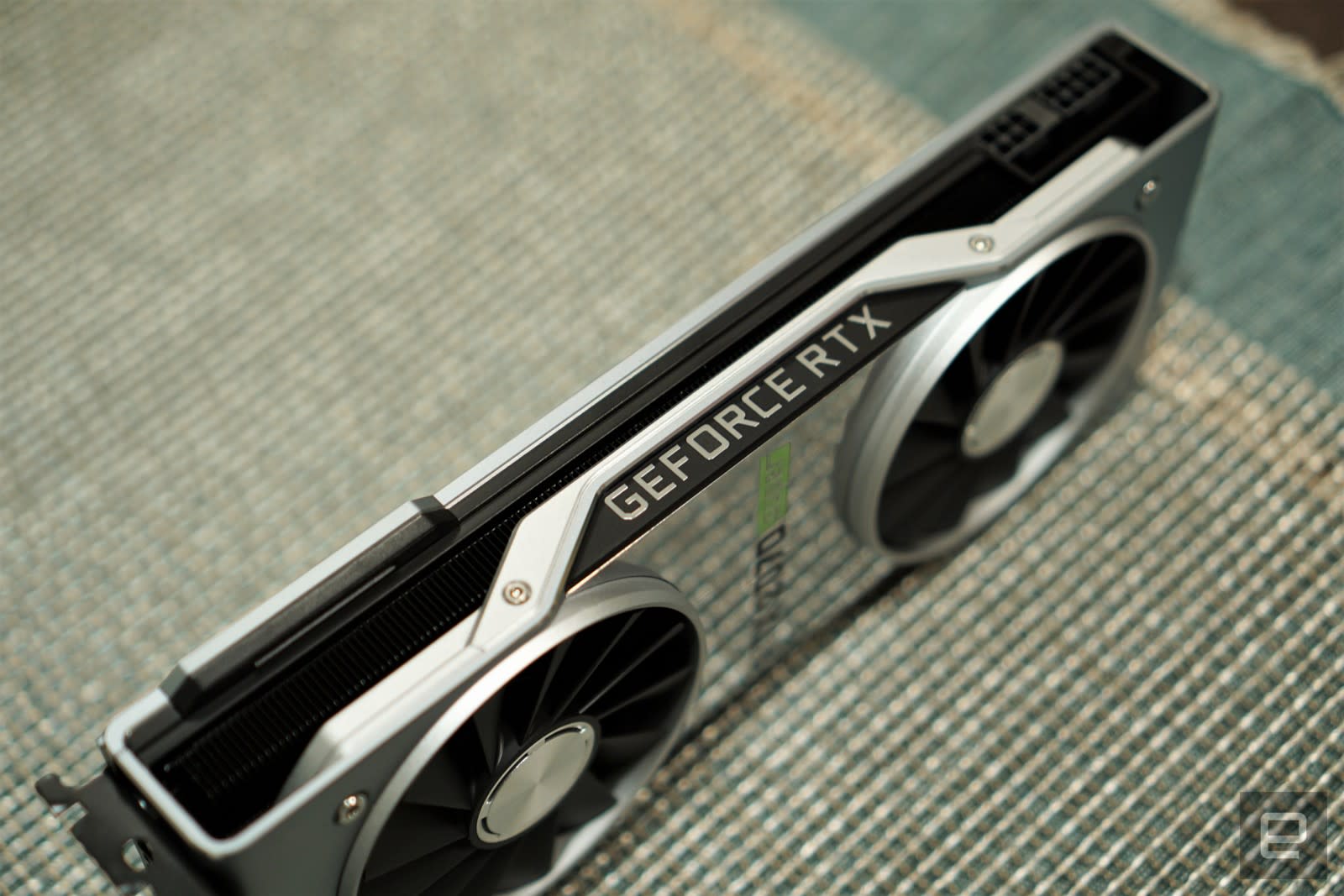 NVIDIA's "Super" GPUs are pretty self-explanatory: they're just faster versions of the cards that came before. But the name also has a hint of desperation, now that AMD is nipping at its heels with a brand new Radeon architecture. All of that corporate drama means one thing: Consumers finally have a healthy selection of midrange GPUs to choose from.

All products recommended by Engadget are selected by our editorial team, independent of our parent company. Some of our stories include affiliate links. If you buy something through one of these links, we may earn an affiliate commission. All prices are correct at the time of publishing.
View All Comments
NVIDIA RTX 2060 Super and 2070 Super review