They're a solid pair of midrange GPUs.

The unveiling of the Radeon 5000 family and Ryzen third-gen chips at Computex made it clear this was going to be a special year for AMD. Its latest CPUs include a monster 12-core chip for just $499. And with its latest video cards, the Radeon RX 5700 ($349) and RX 5700 XT ($399), AMD is finally bringing its long awaited "Navi" architecture (now called Radeon DNA, or RDNA) to a consumer GPU.

But NVIDIA was paying attention. Last week it announced beefed up "Super" versions of its RTX cards, which, on paper, seemed to erase AMD's performance advantage. All of this is great news for gamers, who now have a strong new lineup of affordable midrange graphics cards to choose from. But AMD is once again at risk of being overshadowed by its flashier competitor. (No wonder it rushed out a last-minute price drop.)

The Radeon 5700 and 5700 XT reference cards we're reviewing resemble the Vega 56 and 64 on the surface: They have an understated, almost minimalist design. There's a slight notch on the 5700 XT's case, which looks a bit like it got dented during shipping, but AMD says it helps to improve airflow. Both cards feature "blower" coolers, which rely on a single fan to pull in air and eject heat from your case. That's supposed to mean you won't have to worry as much about hot air building up in your PC. But blower cases also heat up very quickly, limiting their ability to be overclocked. If that's something you're concerned with, you might be better off waiting for third-party cards with dual- and triple-fan cooling options. 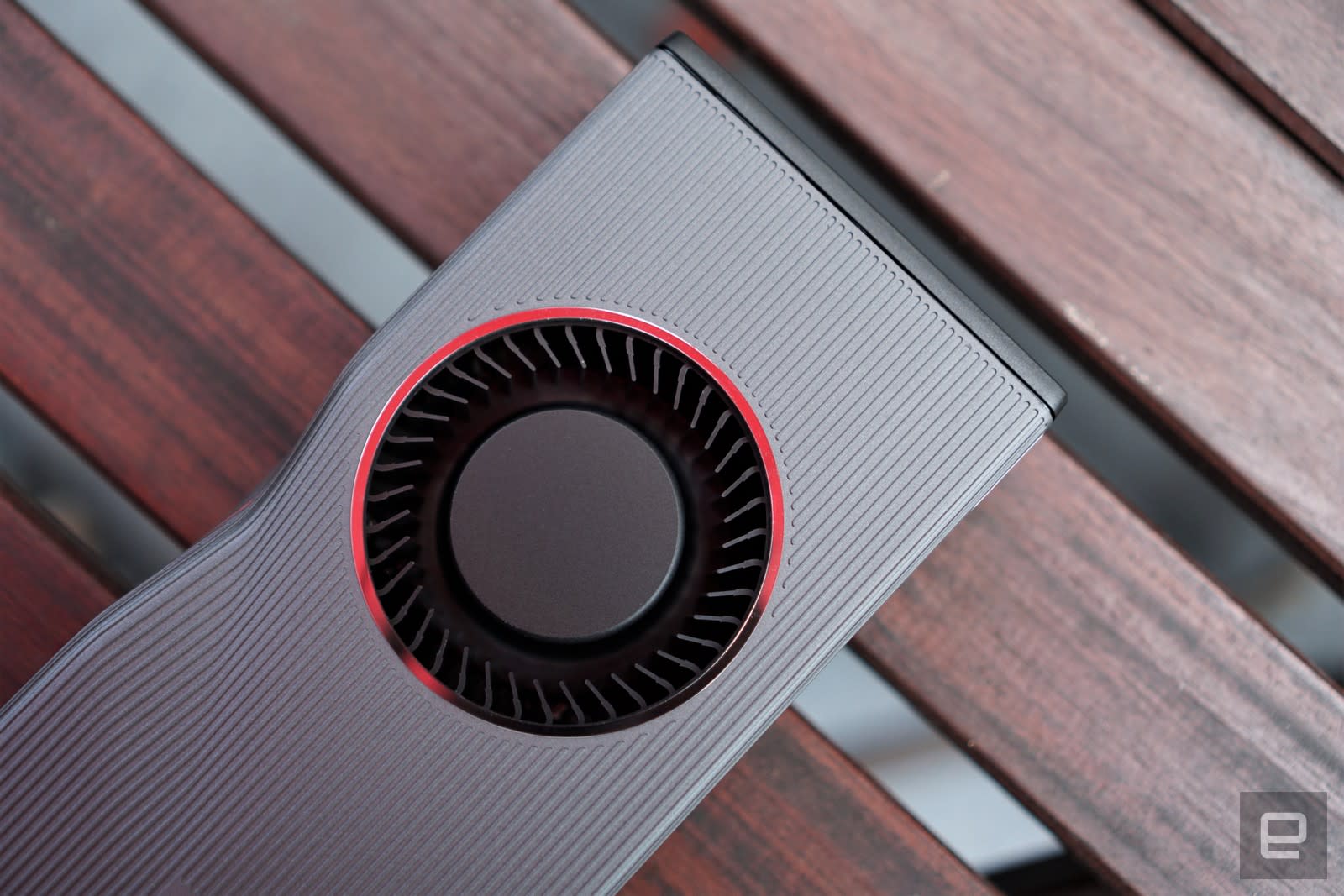 What matters most, of course, is what's under the hood: AMD's RDNA architecture, previously known to enthusiasts as "Navi." The Radeon 5700 and 5700 XT are built on a 7-nanometer process, which makes them more efficient than the 14nm Vega. This isn't a first for AMD -- the beefy Radeon VII, which remains its high-end option, is also a 7nm card, but one built on its older "Graphics Core Next" (GCN) platform.

The real benefits for the Radeon 5700 and 5700 XT come from AMD's revamped computing unit design, as well as a higher bandwidth and lower latency memory. Most important is the more efficient graphics pipeline, which the company says will allow for better performance per clock, in addition to higher speeds. AMD claims that an RDNA card will be about 50 percent faster than a GCN card with the same clock speed and power consumption.

Both new GPUs also support PCIe 4.0, which will offer twice the bandwidth of the PCIe 3.0 standard found on modern PCs. That should help to reduce load times in games with faster NVMe drives. If you're excited about PCIe 4.0 though, just be aware that you'll need to snag a new motherboard to take advantage of it. And at the moment, it's only supported in AMD's X570 chipset with third-generation Ryzen CPUs. Not surprisingly, Intel is trying to downplay the importance of PCIe 4.0 today, since the current standard can still handle 4K/144Hz displays without any issue. At the very least, AMD is showing that its new platform is future proof. Sony, for example, is already touting incredibly fast load times for the next PlayStation, which will also run AMD's RDNA hardware. 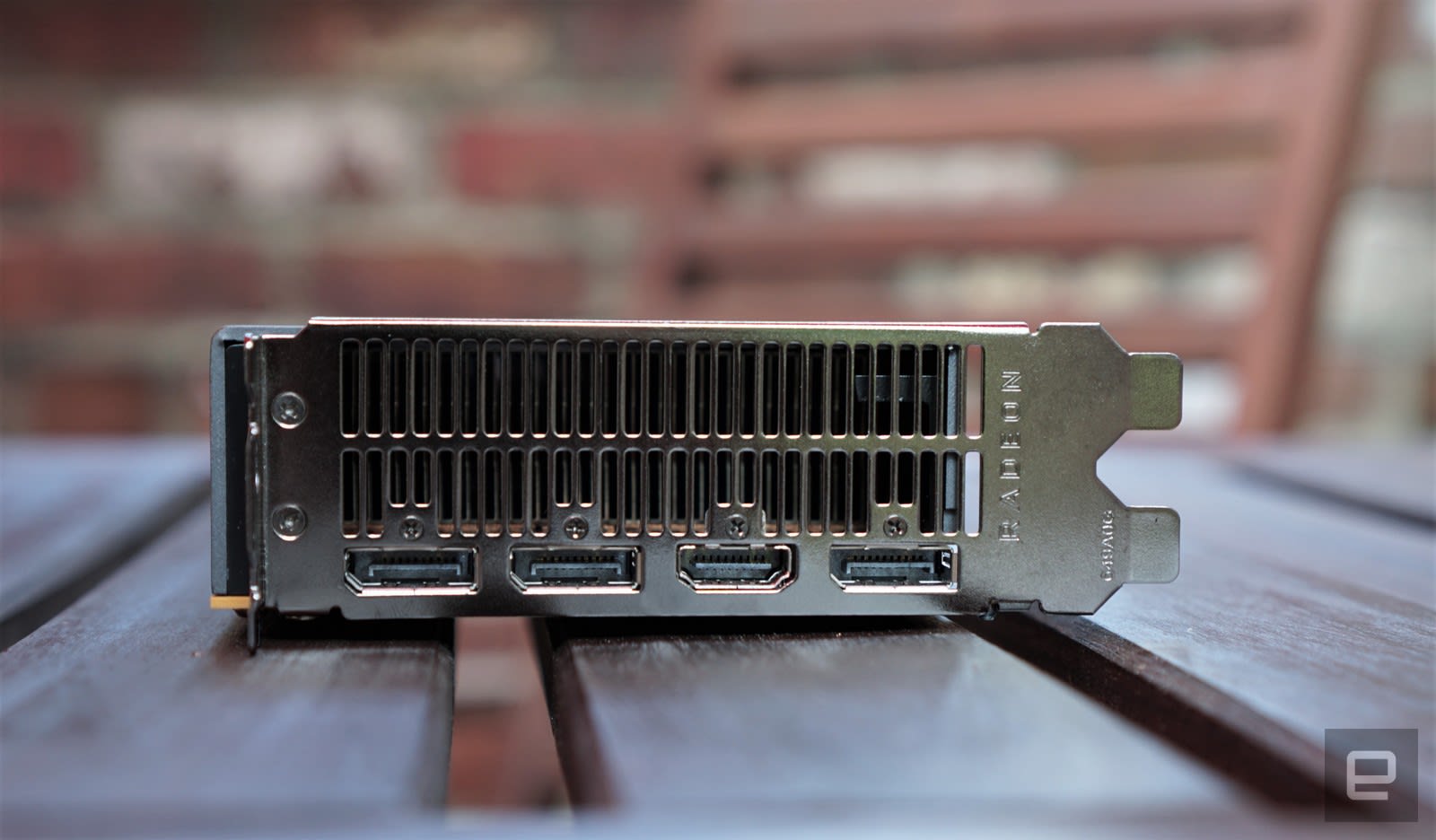 The Radeon 5700 XT features 40 compute units, 2,560 stream processors and a boost clock speed of 1.9GHz. The 5700 is based on the exact same hardware, but it has four fewer compute units, 2,304 stream processors and tops out at 1.73GHz. Both cards include 8GB of GDDR6 RAM, instead of the HBM2 memory from AMD's last few GPUs. Technically, HBM2 offers faster bandwidth, but AMD says the move to GDDR6 allows for more flexibility when designing GPUs. As for ports, both offer three DisplayPort connections and an HDMI port. The Radeon 5700 relies on a single 8-pin power connection, while the XT uses an 8+6 pin configuration.

So what are AMD's new cards going up against? Originally, the company positioned the 5700 XT as something that could clobber NVIDIA's RTX 2070, while the 5700 against the RTX 2060. In most cases, the new Radeons were noticeably faster. But now they're competing with the speedier RTX Super cards, which makes things a bit more complicated.

On a broad level, both new Radeon GPUs deliver excellent 1,440p performance. The XT, naturally, fares better when pumping up graphics settings -- I saw between 85 and 105 frames per second in Destiny 2, compared to 75 to 90 FPS on the 5700. Most importantly, they're both able to run that game beyond 60FPS without a sweat. But if you're a discerning gamer with a 144Hz monitor, which can handle higher frame rates, then you'll probably want to invest in the pricier XT.

I saw a similar bump in performance with Hitman 2's benchmark. The Radeon 5700 XT reached an average of 92 FPS with all of the graphics settings dialed up, while the 5700 clocked in at 79 FPS. In 1080p, both cards performed about the same, but that's not a huge surprise. At that resolution, your performance relies more on your CPU than the GPU. 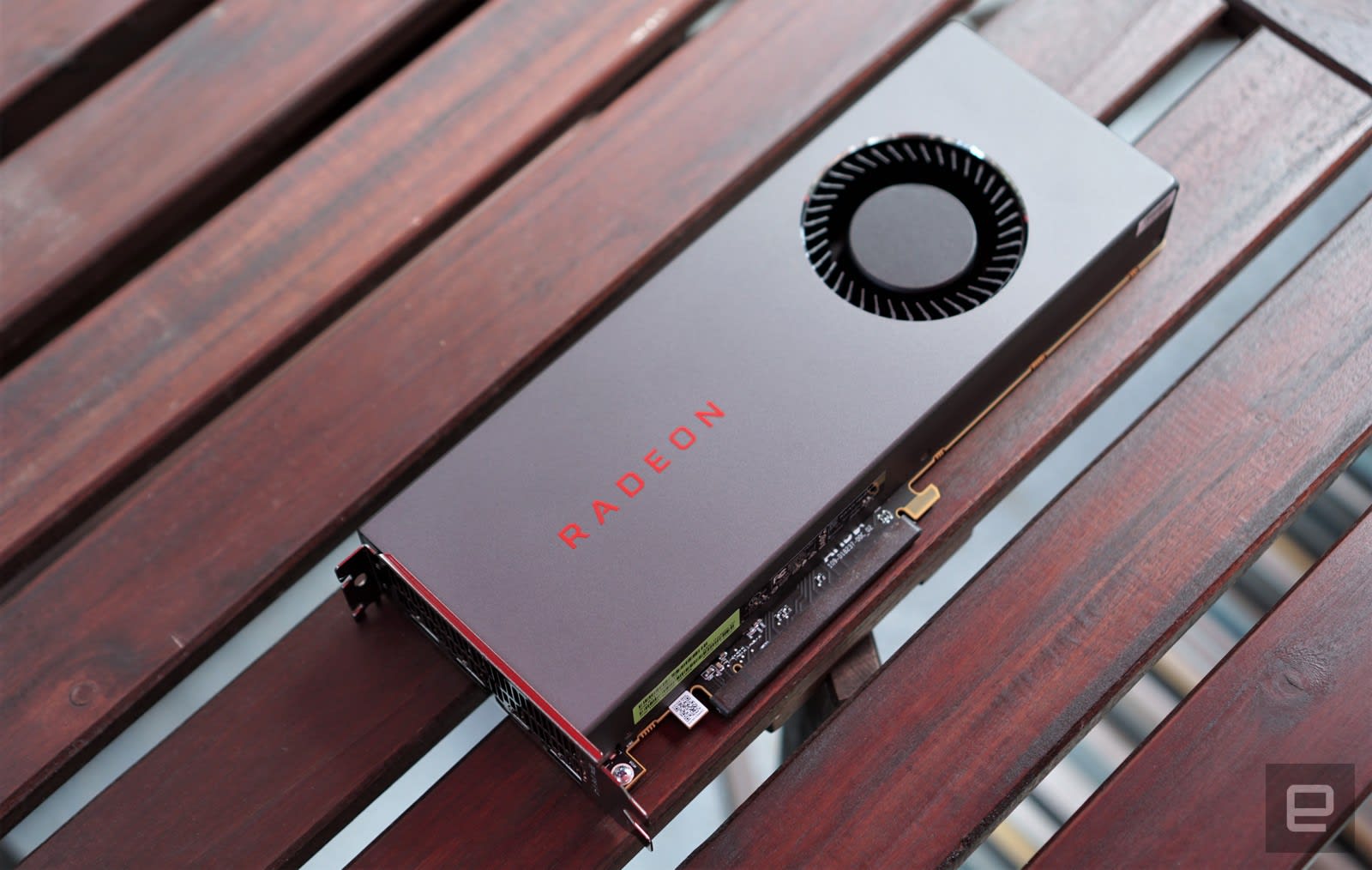 When compared to NVIDIA's new cards, the 5700 XT is about neck and neck with the RTX 2060 Super. I was surprised to see it lose out in Hitman 2, but I'd chalk that difference up to unrefined drivers. As with most GPUs, I'd expect both cards to get better results as the manufacturers optimize their drivers, and developers tweak their games. The RTX 2070 Super leaps ahead of both GPUs, as you'd expect for something that costs $100 more.

AMD says it's focusing on 1,440p performance because that's where gamers are headed next as they move beyond 1080p. According to Steam's June hardware survey, 4.71 percent of players were running 1,440p monitors, compared to just 1.6 percent with 4K displays. That makes sense: 1,440p offers a decent resolution increase over plain old HD, but you can also turn up all of your graphics settings without hurting your framerate too much. To do that in 4K beyond 60FPS, you'd need something more like the $700 Radeon VII, or the $600 RTX 2080 Super.

Even though these aren't really 4K-oriented cards, both Radeons handled that higher resolution about as well as NVIDIA's four-year-old GTX 1080. In The Witcher 3, they all clocked in around 43 FPS with high settings. I was also able to eke past 60 FPS by stepping down the 5700 XT down to medium graphics. Most gamers are better off optimizing their 1,440p performance, but if you're feeling adventurous, you might be able to get even better 4K speeds with some careful overclocking.

As I was benchmarking and playing my favorite titles, both Radeon cards reached up to 91C. Typically, I see temperatures of around 81-85C with high-end video cards. I'd chalk up the higher temperatures to the single-fan blower cooler, but it's also regularly around 80F in my home office. (NYC summers can be brutally humid, and I have to rely on spillover air conditioning from my living room.) The new Radeons were mostly stable during my testing, though I encountered a weird crashing issue related to ultrawide displays. AMD says that should be fixed with the launch day drivers.

Unfortunately, you won't see any real-time ray tracing in these new GPUs, a new feature for delivering more realistic lighting and reflections. That's something NVIDIA is banking on heavily with its RTX cards, but so far AMD has been shy about saying how, exactly, they'll support it. Even though AMD representatives admit that ray tracing will be the future of gaming, they're also not eager to add an expensive new feature until more games support it. That argument was easier to swallow last year, when there weren't many ray tracing games around. But at E3, we saw plenty of upcoming games that'll take advantage of it, like Cyberpunk, Watch Dogs: Legion and Call of Duty: Modern Warfare.

According to the company's roadmap, we can expect to see ray tracing in next-generation RDNA GPUs, with the goal of eventually delivering full-scene ray tracing via the cloud. Both Microsoft and Sony say their upcoming consoles, which will be powered by custom RDNA GPUs, will also feature ray tracing. At the very least, we can now assume those systems will be running next-gen RDNA hardware. But that's a small comfort to AMD's PC fans, who have to sit idly by for now. 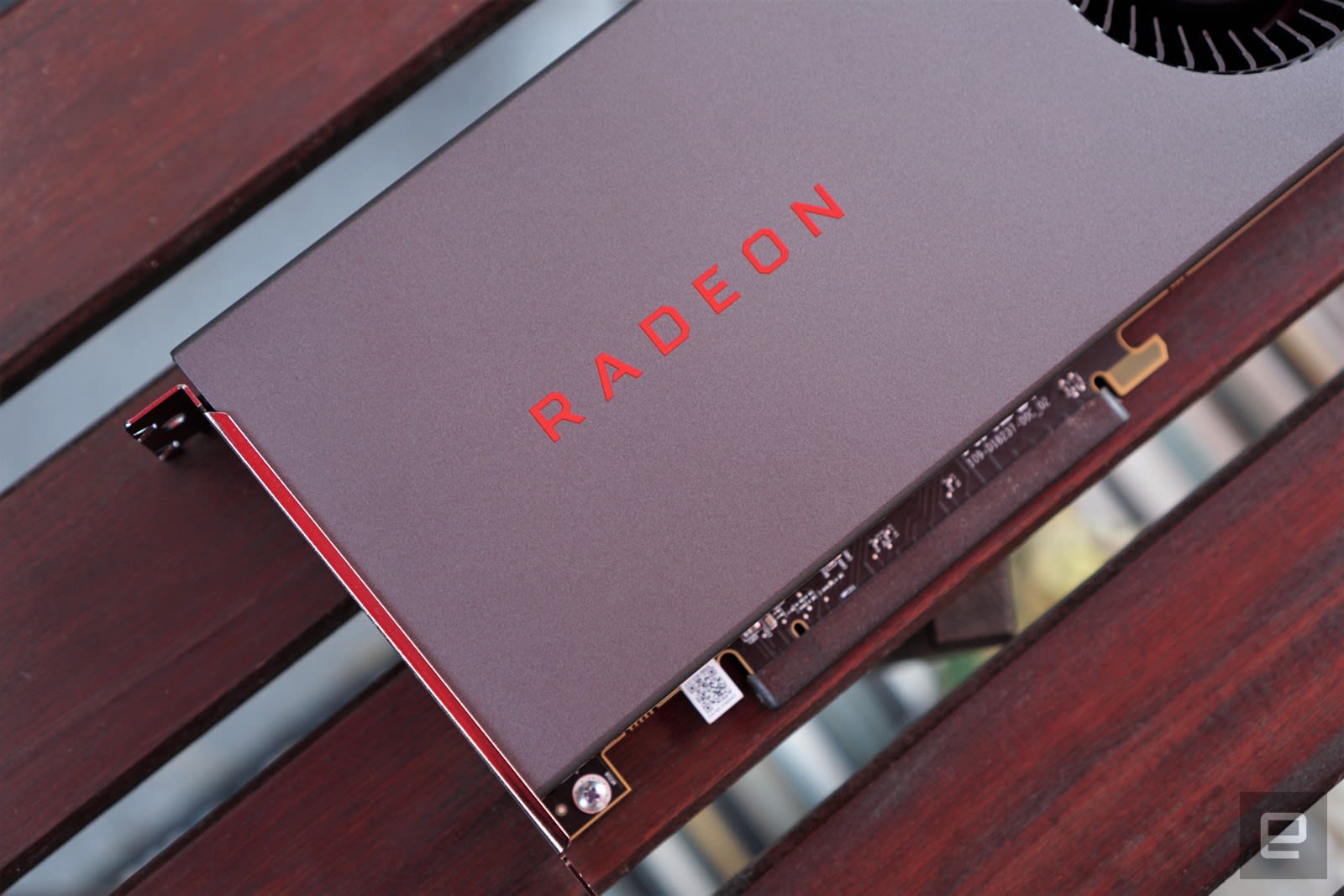 Simply put, AMD has packed plenty of value into the $399 Radeon RX 5700 XT and the $349 Radeon RX 5700. Unfortunately, so has NVIDIA. The RTX 2060 Super is priced the same as the 5700 XT, and in some cases it delivers even better performance. And while I didn't have an RTX 2060 to compare to the 5700, both of those cards seem less compelling when you can nab something much faster for only $50 more. AMD is also releasing a 50th Anniversary Radeon 5700 XT with higher boost speeds for $449, but that's something mainly meant for collectors.

We're seeing the power of strong competition in action with this most recent wave of GPUs. AMD originally planned to launch at much higher prices: $449 for the 5700 XT and $379 for the 5700. But then came the RTX Super cards, and there was no choice for AMD but to lower the cost. Ultimately, it's a good thing for consumers.

No matter if you fall in the AMD or NVIDIA camps, you'll be able to get a decent midrange video card this year. That's great news for anyone who's invested in expensive Freesync or NVIDIA G-SYNC displays, which make it much tougher to jump across the GPU pond. AMD is in a tougher bind when it comes to 4K performance, since the RTX 2080 Super looks to be faster than the Radeon VII at the same price. And of course, if you want ray tracing, your only choice is to go for an NVIDIA RTX card today. 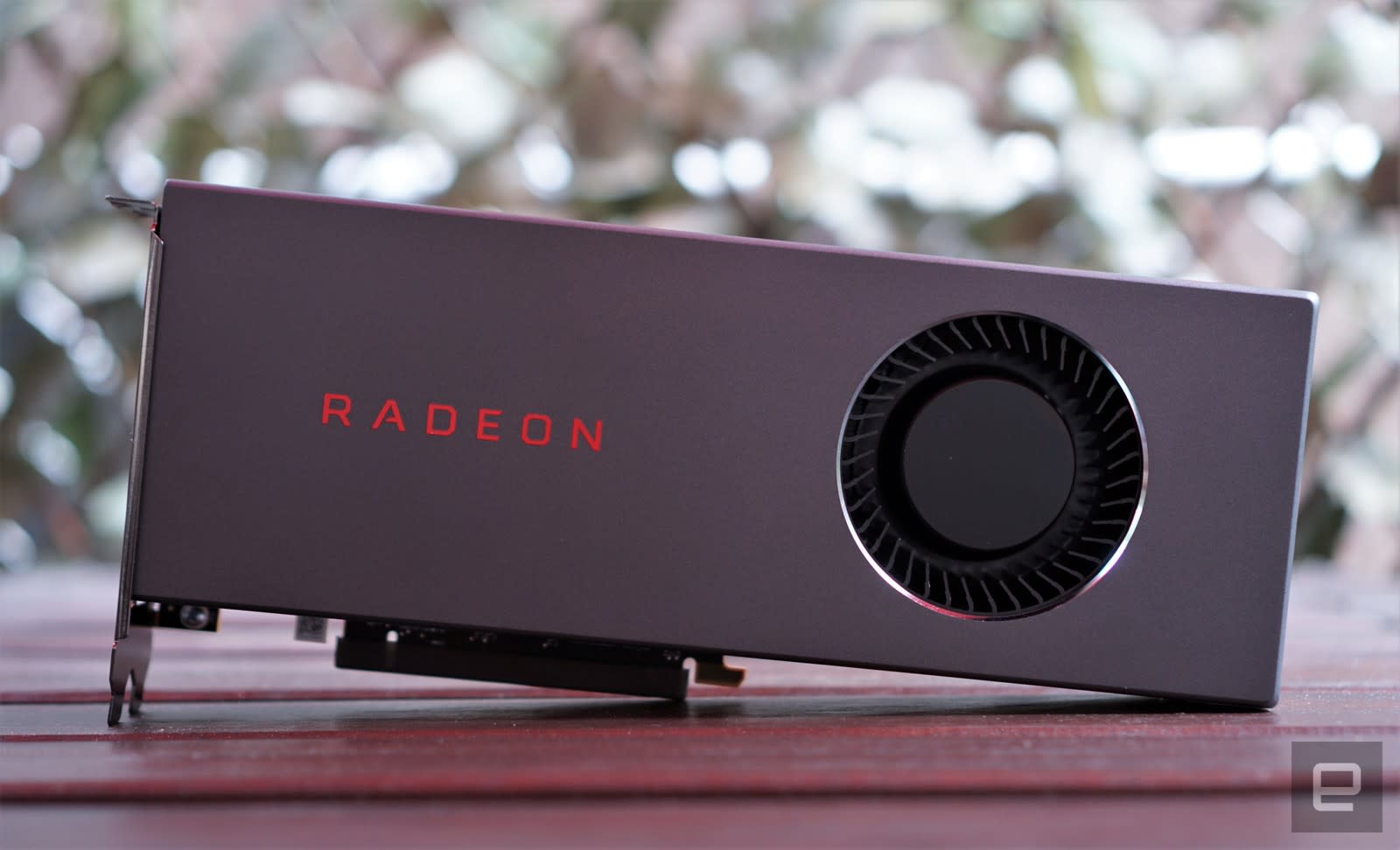 The Radeon RX 5700 and RX 5700 XT are all about potential. As the first RDNA GPUs, they show that AMD is ready to compete directly with NVIDIA's hyped-up RTX line. They're solid and affordable mid-range cards -- if you skipped the Vega generation, they're a particularly worthwhile upgrade. But it's clear that AMD is still playing catch up. The lack of real-time ray tracing is simply disappointing, especially as more developers start adopting it. And now that NVIDIA has more powerful cards available, we're still waiting to see a true blowout RDNA GPU from AMD.

All products recommended by Engadget are selected by our editorial team, independent of our parent company. Some of our stories include affiliate links. If you buy something through one of these links, we may earn an affiliate commission. All prices are correct at the time of publishing.
View All Comments
Radeon RX 5700 and 5700 XT review: AMD brings the fight back to NVIDIA