Organelle M is a portable and endlessly hackable music ‘computer’

This Raspberry Pi-powered device is a synth, a sampler... almost anything you can imagine.
T. O'Brien|07.16.19
@TerrenceOBrien

Critter & Guitari has been pumping out interesting musical devices since at least 2008. But a few years ago the company streamlined its selection of instruments to focus on two products: the ETC video synthesizer and the Organelle music computer. What makes the latter unique is that it isn't a synthesizer or a sampler; it's both or neither or some combination of things. It is, at its heart, a computer running patches built in Pure Data, a visual programming language primarily used for creating and manipulating audio. Though, much of that is hidden, and you can just fire it up and start playing if you want. Since its introduction in 2016 the Organelle has received multiple software updates. But about two weeks ago, it got its first major hardware upgrade. The new Organelle M is powered by a Raspberry Pi Compute Module 3+. It's built on the same core ARM architecture as the original, which means patches should work on both devices. But the Pi has twice the RAM, and its 64-bit quad-core CPU is quite a bit more powerful than the single-core 32-bit chip inside the 2016 model. That should mean that more-complex and demanding patches will run more smoothly, and it may even open up more programming possibilities. 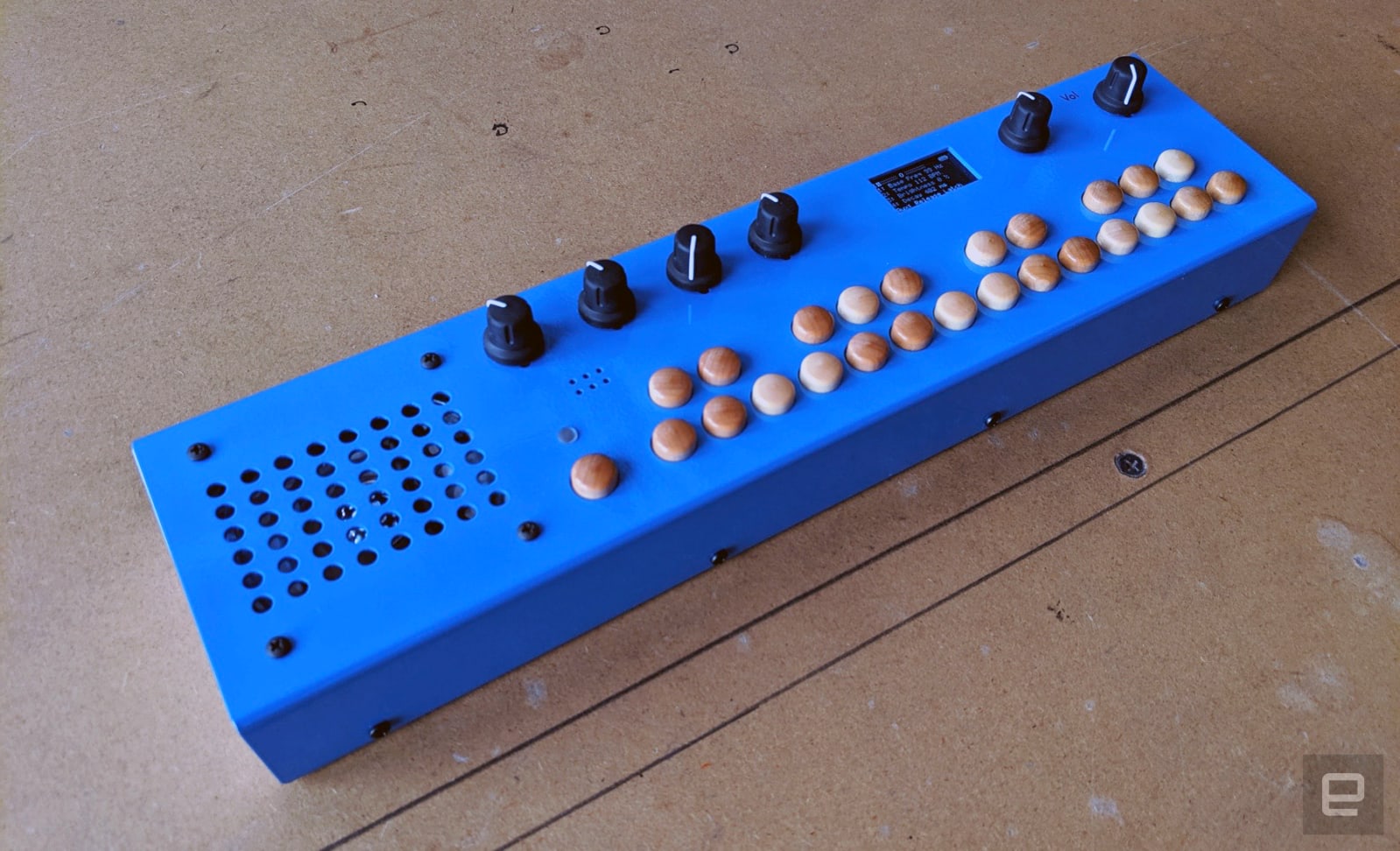 But the faster CPU isn't the star here. The more important new features of the Organelle M are all about making the device more immediate and approachable. The two biggest are the addition of a speaker and battery power. While the original Organelle was easily portable, it required an AC adapter. The M on the other hand can be powered by four AA batteries for around five or six hours. That means you can fire it up and start jamming or sketching a song wherever and whenever the mood strikes. As long as you're not going to be disturbing anyone too much, you don't even have to bother plugging in headphones. The integrated speaker is surprisingly solid sounding and loud. It's not going to rattle your walls with deep resonant bass, but it's definitely a notch or two (or three...) above the speakers I've seen in other portable synths like the Volcas. 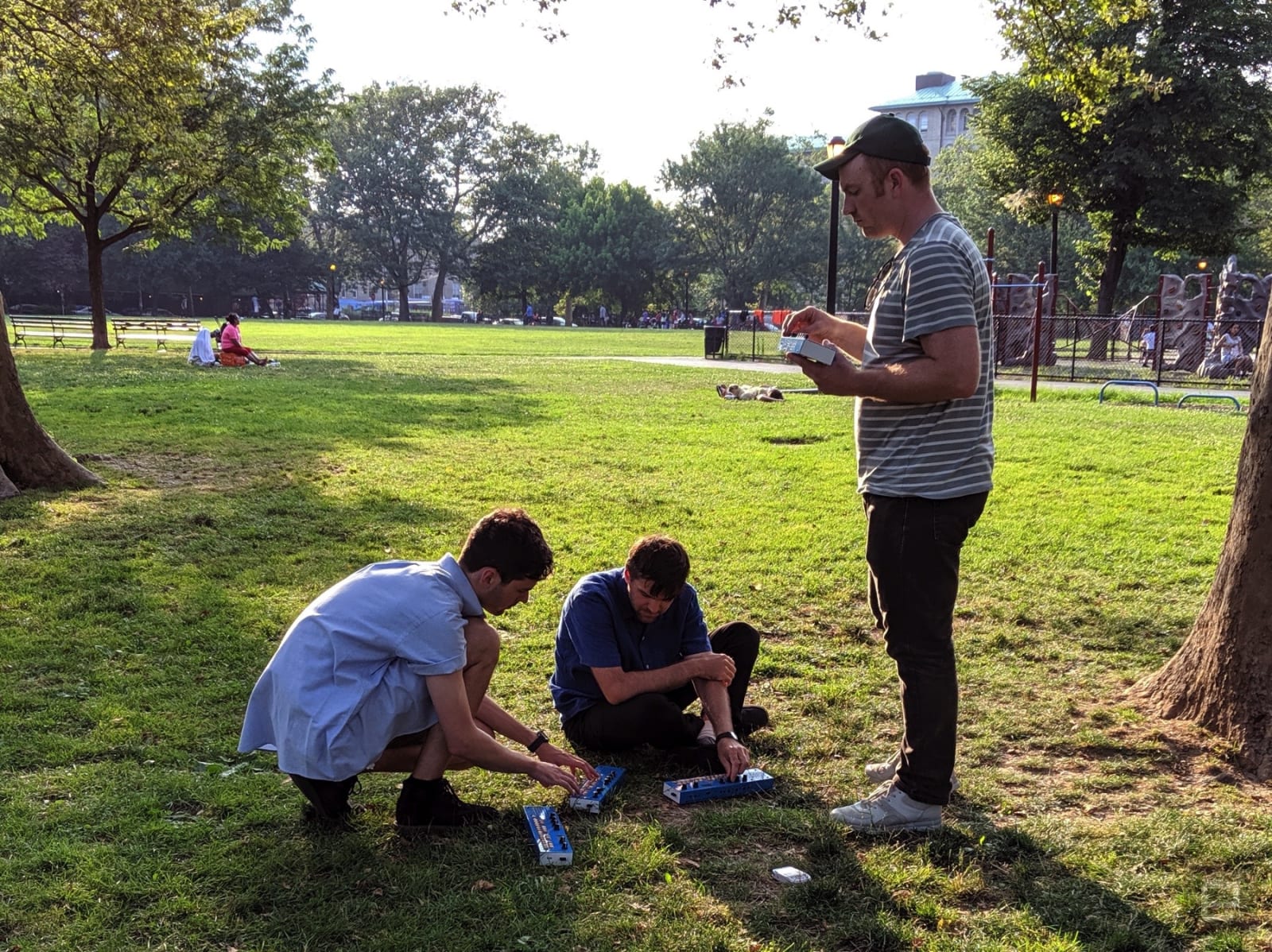 The guys at Critter & Guitari even took me to the park down the block from the studio where they do the final assembly of each Organelle M by hand. They fired up four devices, linked them up via WiFi (a USB dongle is included in the box) to sync the tempos and started jamming. There was no mixer, no outlet, no router -- just three dudes playing music in the park. And it was loud enough to be heard over kids yelling in the playground 30 feet to our right, the pickup games of basketball being played 20 feet behind us and the people doing tricks in the skate park beyond that.

The other nod to immediacy is the integrated microphone. The previous model required you to hook up an external mic or audio source to make use of any sampler patches. With the M, you can just hold it up to your face and sing or speak into it. Obviously, the quality won't be quite the same as if you plugged in your trusty SM57, but it's not half bad either. It's definitely enough to have some fun and jam, or to just start mangling sounds in search of inspiration.

The last major additions are dedicated MIDI in and out ports. The original Organelle supported MIDI over USB, and the M does as well. But the new version also includes a pair of 1/8-inch jacks for MIDI over TRS or via five-pin DIN adapters. 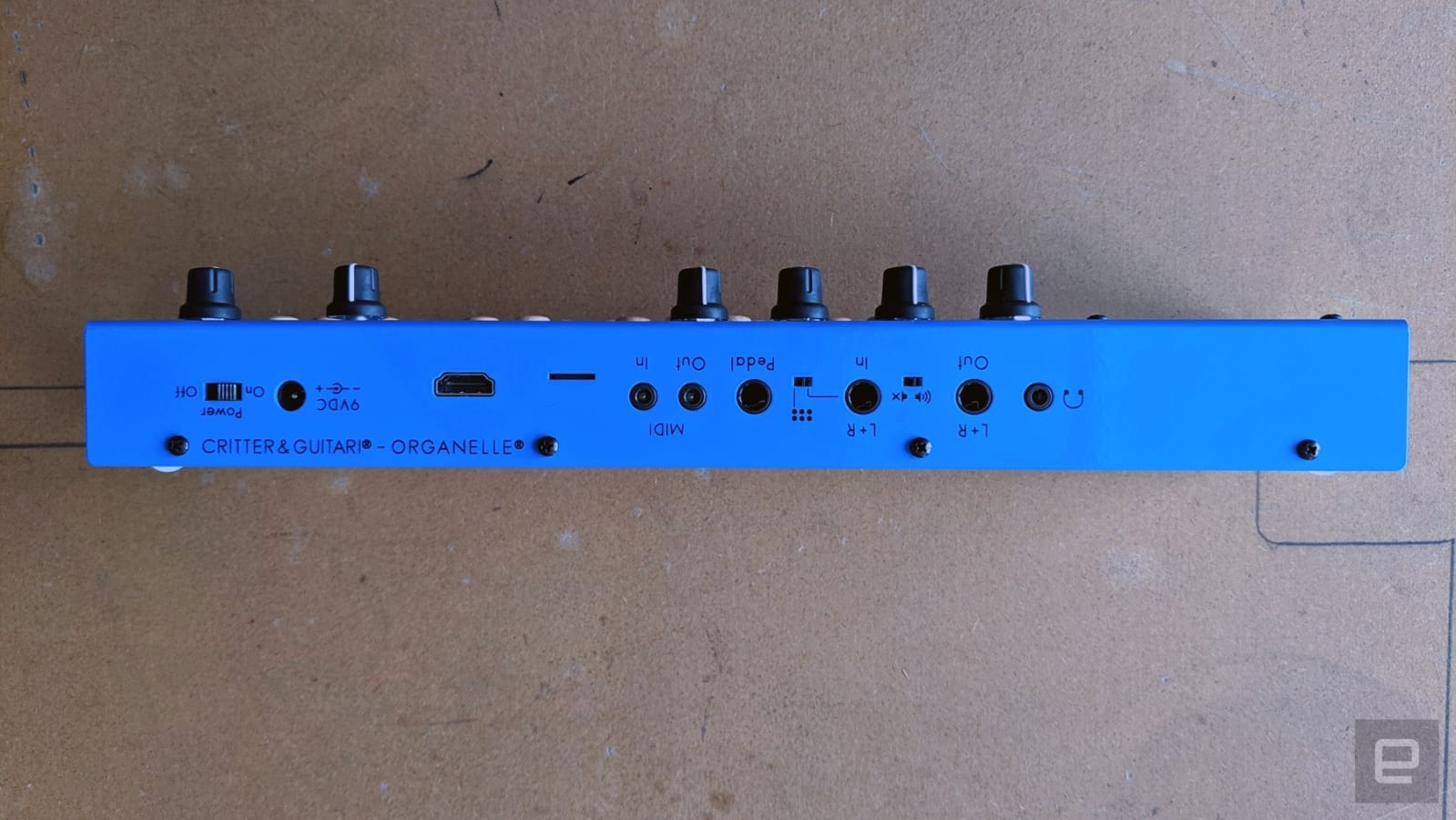 What makes the Organelle unique, though, is unchanged. And that's its ability to be almost anything you want: a synthesizer, a sampler, a drum machine, a guitar effects pedal. There's a sizable and active user community always building new patches for the Organelle, and Critter & Guitari itself is constantly whipping up new ones as well. Some of them are simple, like an emulation of the Rhythmicon, which is widely recognized as the first drum machine. But others are incredibly complex, like Orac, which actually lets you combine other patches within it like a modular synthesizer.

In one demo, I saw two Organelle Ms linked together -- the first being used to process a guitar signal, and the second acting as a complex looper that could play back the same sound source at different speeds or in different directions simultaneously. The result was a gorgeous and bizarre wash of guitar that both sparkled and made me feel slightly uneasy (in the best way possible). 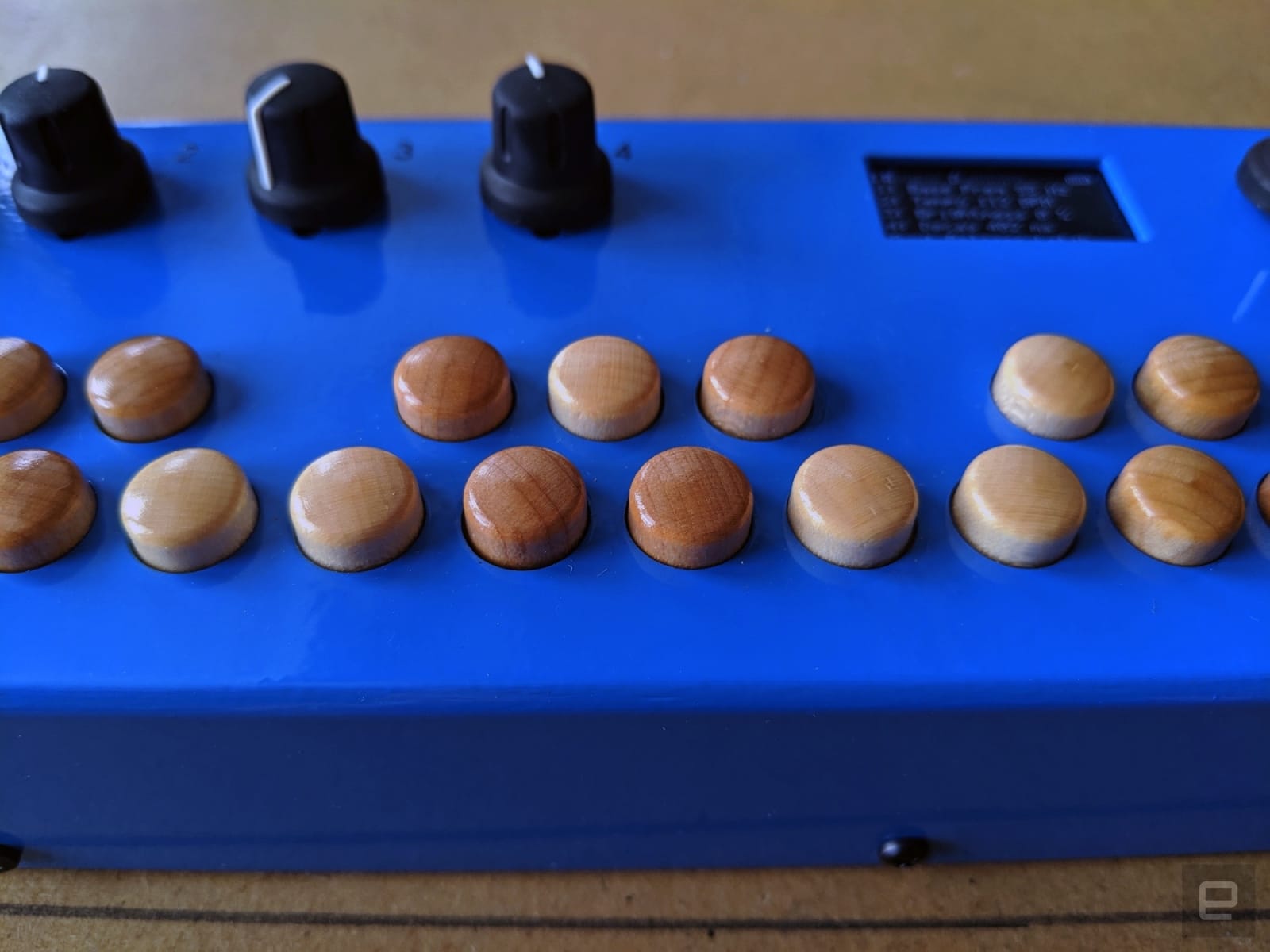 All of this is to say, the Organelle is quite powerful and portable. I don't know how well it will stand up to the abuse of being regularly tossed in a backpack, but it seems pretty sturdy. The base is made of a light plastic, but most of the shell is aluminum and should be able to withstand at least a light beating. The encoders (a total of six) are solid feeling, and the OLED screen, while small, is perfectly usable for navigating patches and tweaking settings. My favorite part, and perhaps the most instantly recognizable physical feature of any Critter & Guitari product, is the keyboard. Instead of tiny plastic piano keys or a capacitive-touch strip, there are two octaves of round maple buttons. They're clicky and super enjoyable to press. They're not velocity sensitive and don't have aftertouch, but I'm not aware of any portable, battery-powered synth that has those. (If I'm wrong, please let me know in the comments.)

At $595, the Organelle M isn't an impulse purchase like a Volca or a Pocket Operator. It's closer to devices like the OP-Z and OP-1 from Teenage Engineering. But at the end of the day they're all very different. Trying to compare them is like trying to compare Avengers: End Game to Us: One isn't necessarily better than the other, it just depends on what you're looking for. I was only able to scratch the surface during my brief hands on, but it's clear that the Organelle is a pretty unique instrument. It's a compact, capable and endlessly hackable music-making tool.