Read the fucking manual. It's pejorative advice usually dispensed to someone struggling to find an answer — one typically available to them with minimal effort. The OP-Z from Teenage Engineering doesn't ship with a full manual (though there is one online). But even if you read that thing from top to bottom, twice, I bet you still wouldn't know everything this magical box of secrets has to offer. It's a mind-bendingly complex, yet hysterically fun mini-studio that keeps on giving. And at $600, it's not crazy expensive, so you're probably going to get more than your money's worth.

Teenage Engineering has been making synthesizers for about a decade and they are always quirky. Those quirks might involve the design, the user interface or likely both. Importantly, that frivolity doesn't mean they're just novelties; they are always fun and musically capable. The OP-Z is something of a successor/sibling to the long-established and much-loved OP-1. Just smaller, and in many ways, smarter.

I am prone to not R-ing T F-ing M, though. Partly because self-discovery is half the fun, especially with musical gadgets. (The main reason is arrogance on my part.) If I had read it, however, it wouldn't have taken me far too long to realize there are two volume controls: one master, one in the mixer. (You nearly had a review complaining how quiet the OP-Z was.) 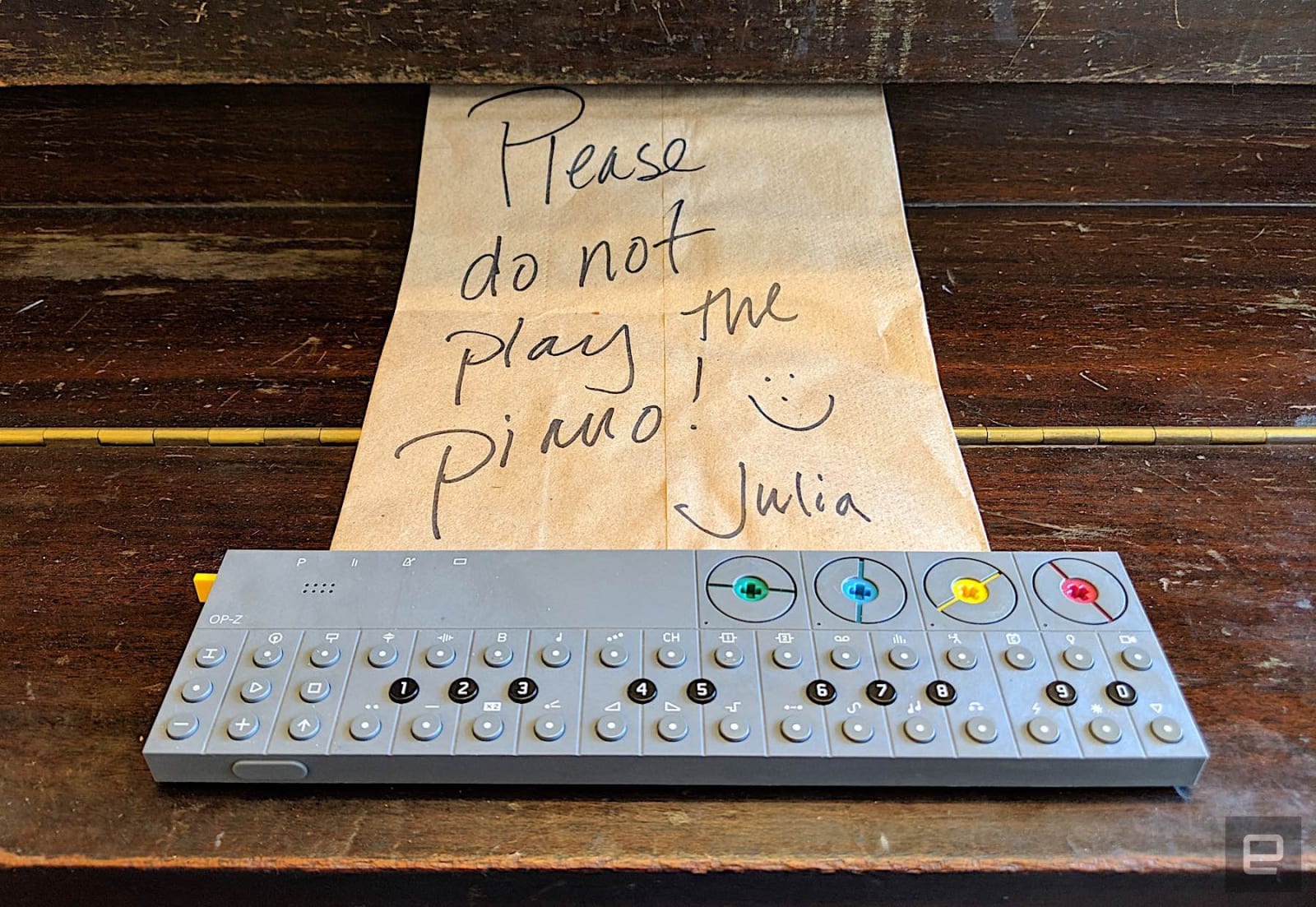 Before I gave in and thumbed through the online literature, I was already pretty smitten with the OP-Z (volume issue aside). The small, gray slab (with flecks of color) is a delightful object in its own right. Turn the bright yellow dial on the left-hand side and the OP-Z sparkles to life with a flourish of the lights. Poke some of the buttons and squelchy sounds emerge. Press the "Play" button and a moody EDM track begins. Within seconds you realize what this thing is capable of -- if only you knew how to get there.

Without a display, most of your interactions with the OP-Z will be through combination key presses. Four buttons along the top edge offer primary controls (Program, Mixer, Metronome and Screen). The front of the OP-Z is littered with circular buttons. The top row for selecting parts/instruments and more. The leftmost buttons perform functions like Play/Stop, record and so on. The rest of the bottom two rows serve as a rudimentary piano keyboard, but almost every button has at least one secondary function, represented by small glyph-like icons. The four flat dials on the top right serve as control knobs (for volume, filters etc...), and a spongy rubber button on the bottom edge is a clever little pitch-bend control.

The OP-Z has a built-in speaker, but it's a little feeble. Fortunately, there's a headphone jack, so you can jam in private, or connect to a decent speaker. The onboard battery is good for about 6 hours, but USB-C charging tops it up pretty quickly. That all makes the OP-Z pretty competent for a portable device, but there's more. A companion app (iOS only) turns your phone into a display for the synth, and includes more goodies, like tools to generate videos or choreographed slideshows to complement your music. That not enough? The OP-Z also has an expansion slot along the top (technically, it's inside) that will allow you to add more hardware accessories (think things like control voltage gates and more). Oh, and you can also control disco lights. Honestly, it's baffling how much creativity this one box can deliver. 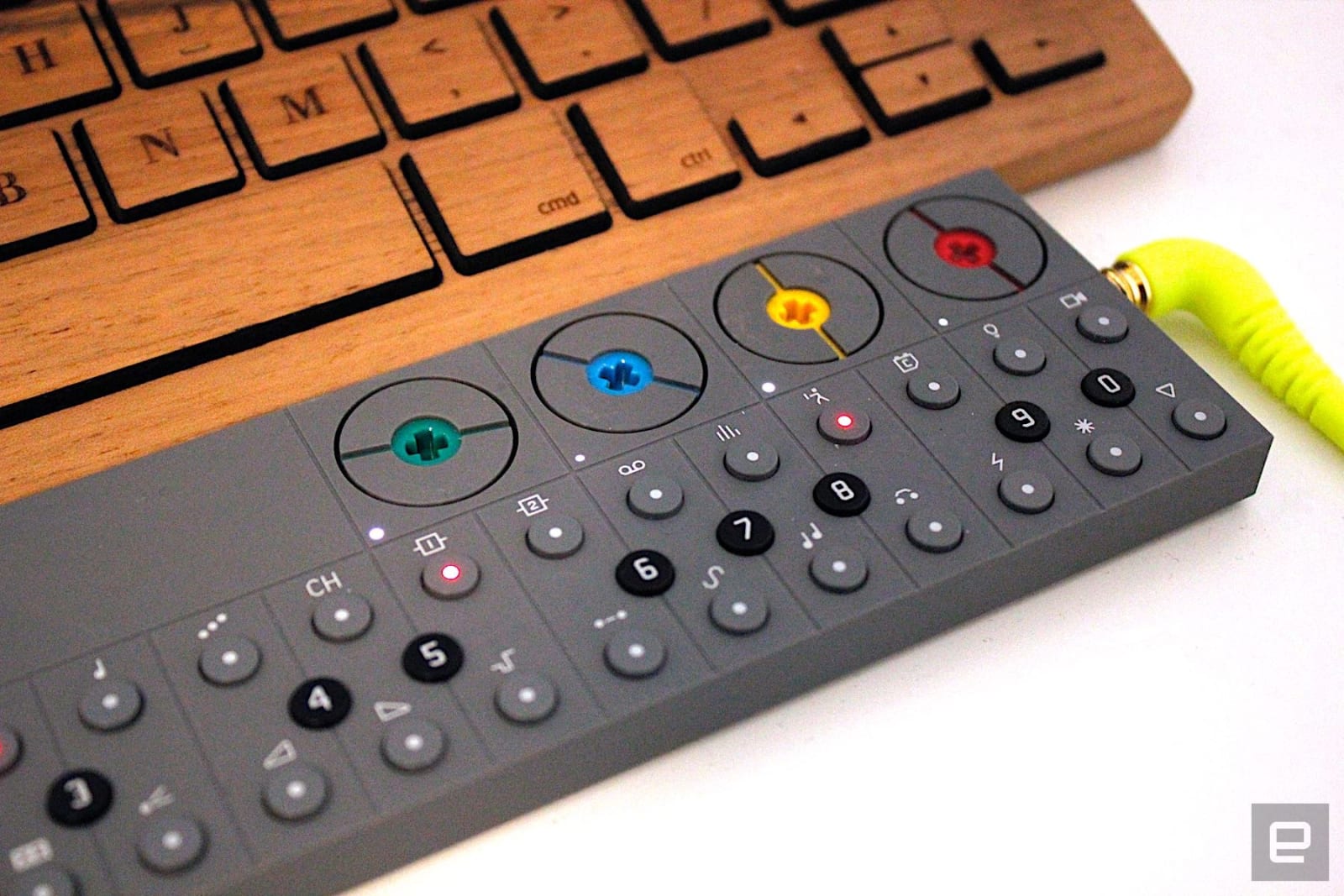 But let's take it back a step. Making music is what you really want this for, and no amount of cool apps or bolt-on accessories matter if the basics aren't up to snuff. Out of the box, there are drum sounds, leads and basslines that span a number of genres. There are also samples and one-hit sounds for adding spice and flavor. But know this, there are not a lot of them, and your options for bending them into a sound of your own are slightly limited (compared to a dedicated synth).

The pre-loaded demo tracks clearly aim to show that the OP-Z can be used for a number of styles/genres. There's some minimal, electro, drum and bass and general EDM, but overall I would say the OP-Z leans a little more to the minimal and EDM side of things -- at least out of the box.

To manipulate the pre-loaded sounds you'll mostly use pitch/filter/resonance controls or the attack, decay sustain, release (ADSR) envelope and a few effects (delay, distortion and so on). I've read much of the manual at this point, but I wouldn't be surprised if there were hidden options to do even more with the presets. The good news is that you can expand the onboard sounds by loading new synth engines (via the app) or external sound packs (more on these below). These sound packs need to be in the OP-1 format (AIFF).

The better news is that with the OP-1 having been around for so long, there are plenty of user-generated collections for you to download, often for free. If you happen to own an OP-1, you can, of course, export your own. And if you don't? Well, there's a handy utility that'll convert almost any sample for you. All that to say, despite the slightly limited built-in sound-creation options, you can get a wide variety of sounds onto the OP-Z.

The downside, for me at least, is that adding samples is a minor chore. I like creating sounds from scratch, starting with a choice of waveforms, and bending it into something entirely different. Not to mention that, unless you happen to have samples of things you want to use, you have to go find them/create the sounds you want elsewhere and then bring them to the OP-Z. For all that, you could stick with whatever you were making the samples on (such as a VST synth) -- at the cost of portability, of course.

That said, I might be asking too much of the OP-Z. It's an incredibly versatile piece of kit, great for making music on the go, and endless fun. To ask for it to replace a fully-featured DAW and desktop-level software synth is to ignore what the OP-Z (and, really anything by Teenage Engineering) is: a mobile idea machine.

While it's tempting to call the OP-Z a "synth," for the reasons above (and the ones that follow) it's really more of a micro groovebox. That's to say, on top of its sounds and keyboard, it's also a sequencer, and apt for live performance too. Once you get the hang of navigating between projects and patterns, you can start chaining things together into a song. You can work with single bars, or change timing so that some elements run for more than one bar (you'll definitely need this, unless repetitive loops are your thing). Once you have something you like, you can bounce stems to audio, use the 3.5mm audio out to record into other software or use MIDI with your main DAW to take the project further.

The performance features are particularly good for jamming with ideas. The lower row of the "keyboard" is used for live punch-in effects. The little icons next to each key are meant to represent roughly what each effect is, but they're not all instantly obvious. There are things like beat-repeat, double tempo, random pitch changes and echo filters. You can easily waste an hour jamming a few bars into something completely different as you punch in different effects on different parts of your track. You can record these selections in, of course, but it's also a good way to test out different flourishes that you can later commit through the step sequencer. 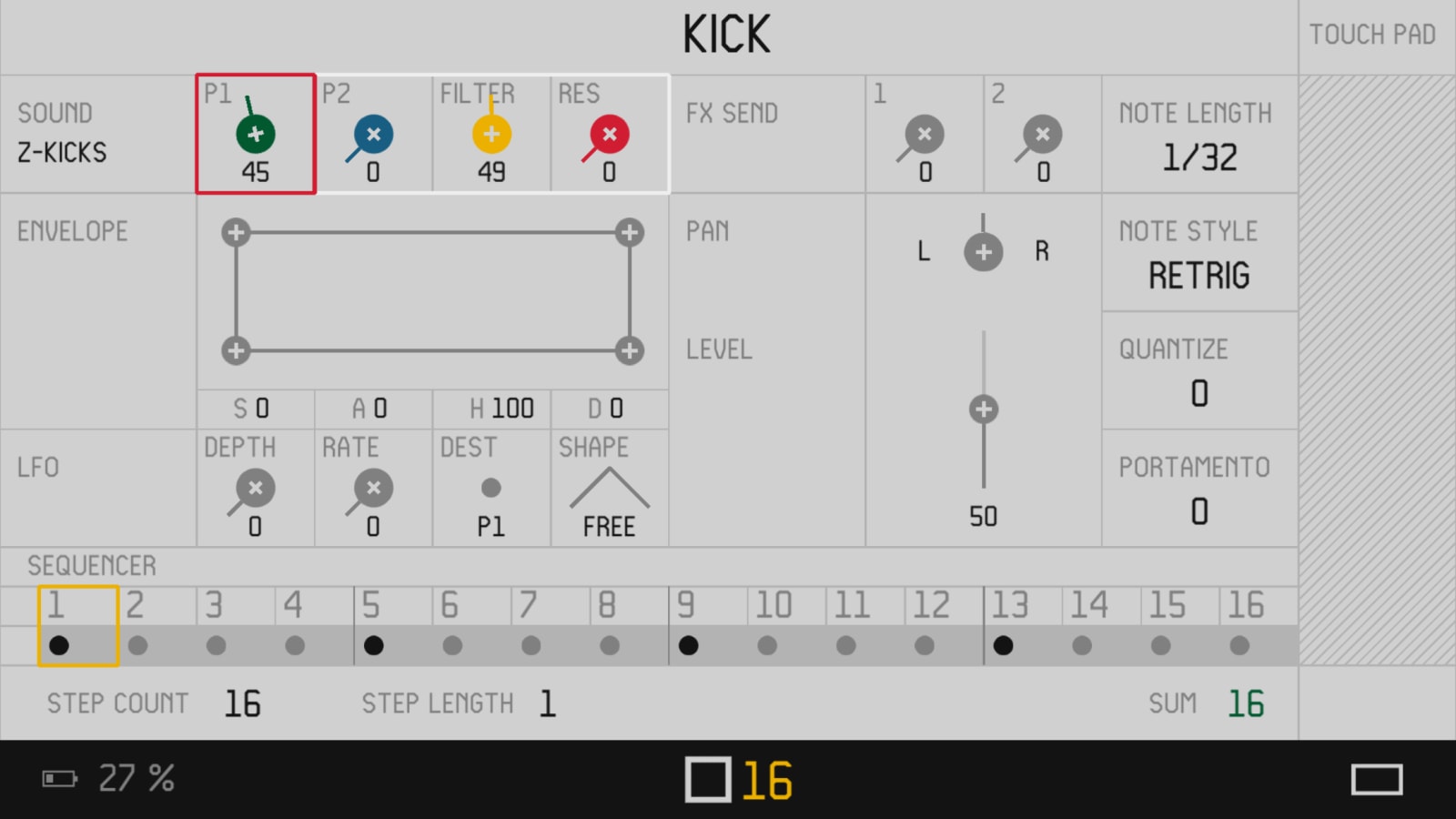 If you want to get a little deeper into settings, this is where the app comes in handy. Pairing is painless, and it instantly switches screens to whatever you are working on. When I select my kick drum, for example, a detailed view with all the parameters appears. Navigating the settings on screen is much easier than playing finger-twister on the OP-Z itself, even if it does make the whole setup more cumbersome by forcing you to perch an iPhone somewhere.

The app also adds features you obviously couldn't do without a real display, notably the aforementioned video and slideshow tools. These two sections of the app are secondary "bonus" features for most people, but still incredibly fun. I loaded some images into a folder (it's a bit of a juggle with iTunes and file sharing) and idly created a twerking Tina from Bob's Burgers to go along with one of my tracks. The video section looks potentially powerful, as you can create 3D visuals in Unity, and then use a dedicated channel on the OP-Z to switch the camera view and punch in visual effects, all in time to your track.

Ultimately, what I love about the OP-Z is that it's very easy to pick up and start dabbling. Often, I found this would naturally lead to an extended session, with pleasing results. This is a crucial selling point. I have a desktop with Ableton and a vast library of synths and samples to play with. I rarely do though. A busy life, mostly working at a computer, makes spending my free time also in front of a screen unappealing. With the OP-Z I can just pick it up and not feel like I am back at "work." And it's highly portable, too. I recently took this to New York (I live in California) and it was as easy as deciding to bring my Kindle or not. I'm also about to fly across the Atlantic, and I know what will be coming with me. 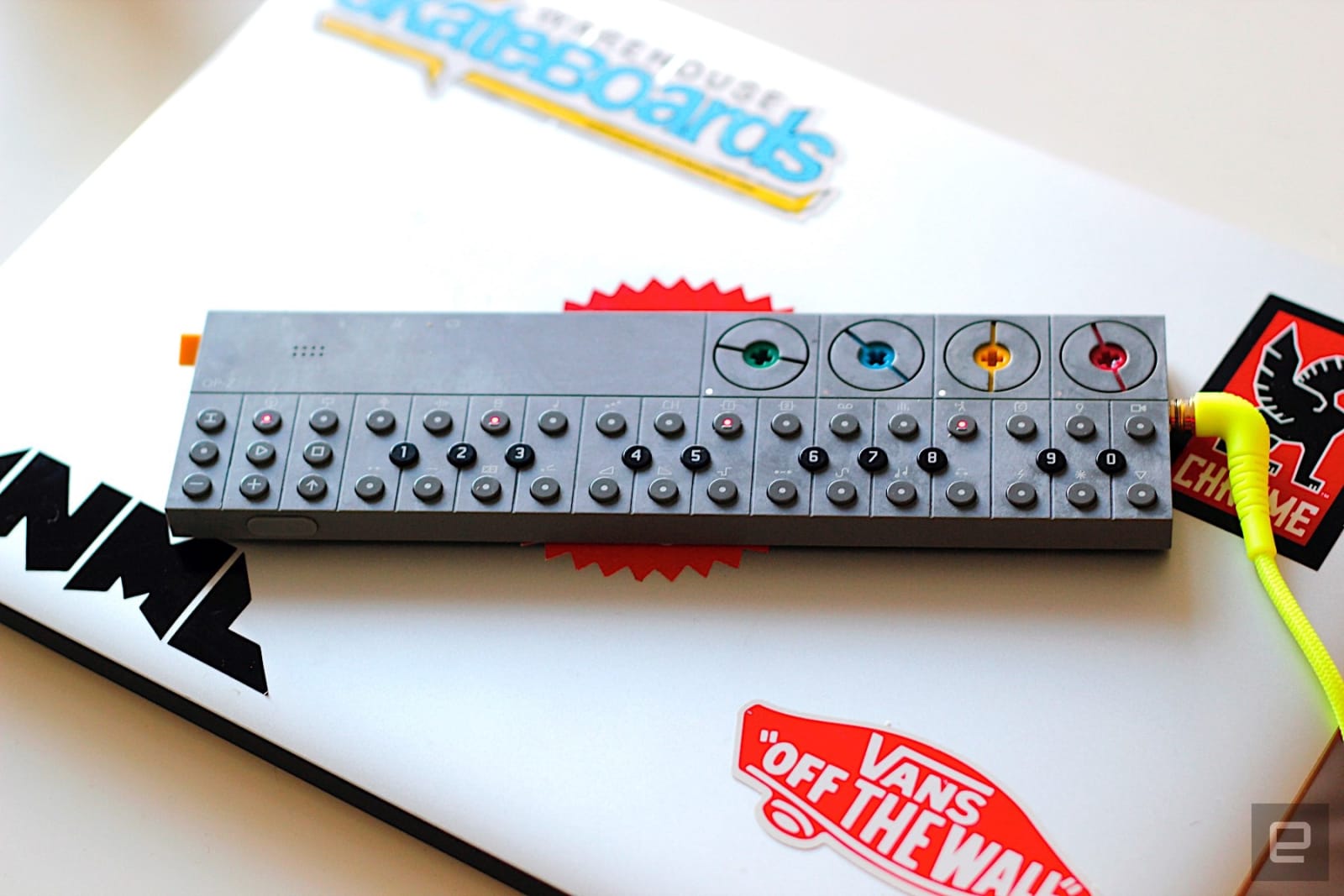 There are several all-in-one gadgets for making music, but they are either aimed at your desk, or are too simple that they become fun time-wasters. Akai's MPC live, or Deluge from Synthstrom, for example, are pretty robust, but not nearly as convenient to slip into a backpack (or back pocket in the OP-Z's case). Teenage Engineering's own Pocket Operators are even more portable than the OP-Z, but lack the vast functionality. All that to say, for $600, this thing is so versatile and so portable, and heck, so much fun, a few minor gripes don't stop this from being a killer piece of kit. Best of all, you'll likely keep discovering more secrets for years to come.

All products recommended by Engadget are selected by our editorial team, independent of our parent company. Some of our stories include affiliate links. If you buy something through one of these links, we may earn an affiliate commission. All prices are correct at the time of publishing.
Teenage Engineering OP-Z review: Small synth, big dreams
av
beats
gadgetry
gadgets
gear
mobile
music
op-z
OPZ
review
synth
teenage engineering
teenageengineering