The new entry-level MacBook Pro is a much-needed upgrade.

Last fall, Apple finally updated the MacBook Air. In doing so, it made choosing the best entry-level Mac laptop far more complicated than necessary. The Air was directly pitted against the 12-inch MacBook and the cheapest 13-inch MacBook Pro (sans Touch Bar). There was no clear-cut best option: There was too much feature overlap, and no one machine was a winner in all regards.

Fortunately, Apple simplified things quite a bit last week by discontinuing the 12-inch MacBook and updating the Air and entry-level Pro. The Air simply got a $100 price drop and a True Tone display, but changes to the Pro were more extensive. But after about two years of status quo, the $1,299 MacBook Pro got some substantial changes: It now has an eighth-generation Intel quad-core processor, better speakers, a True Tone display and the controversial Touch Bar with Touch ID. Oh, and both laptops also have Apple's supposedly more reliable keyboard design, which the company first introduced in May.

Now it's a lot easier to compare these lineups. If you want to save cash and aren't working on processor-intensive tasks, the Air is probably for you. But if you require more horsepower, the MacBook Pro's quad-core processor is a major improvement for an extra $200.

As you probably already know, the new MacBook Pro isn't a radical redesign: It's a quiet but notable refinement. But that means that any issues you may have had with the laptop haven't changed. You're still saddled with the shallow-travel butterfly keyboard, though this new one is much quieter than the one found on the entry-level MacBook Pro of years past. (Obviously, I can't speak to reliability yet, aside from noting that I didn't run into any stuck or repeating keys after the first week.)

This laptop still only has two USB-C ports for charging and connectivity rather than the four you get with more-expensive MacBook Pro models. It seems like an arbitrary exclusion, but I've also rarely used more than two of the ports on my work-issue Pro at any time. I think that given this laptop's place between the Air and the more expensive and powerful MacBook Pro models, people considering it probably won't mind having just two ports. 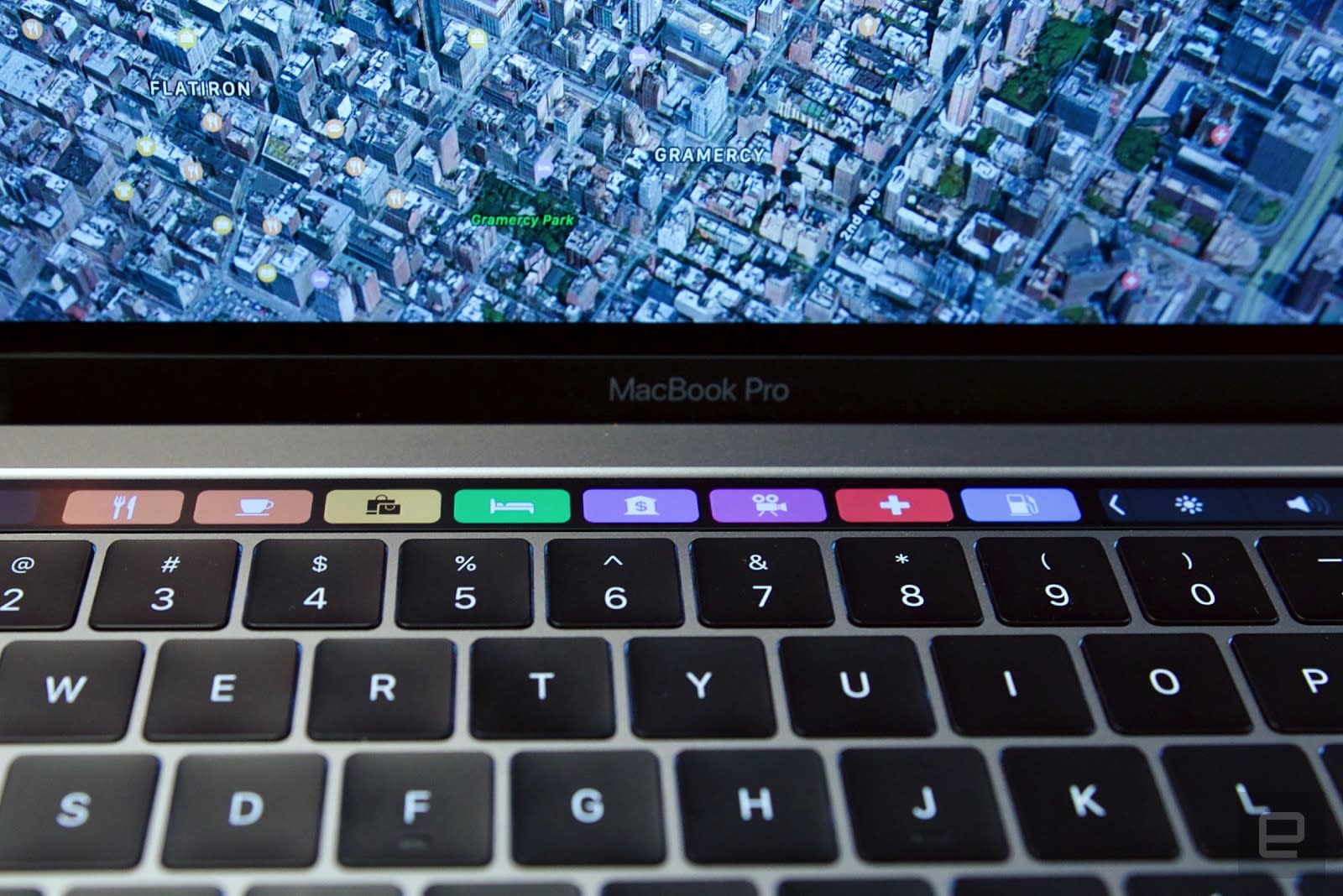 One feature Apple did bring down from the higher-end MacBook Pro is the Touch Bar and Touch ID. Almost three years on, the Touch Bar's usefulness remains highly suspect. It's actually pretty handy when apps support it well, as Safari, Photos, notes app Bear and a few others do. But even at its best, it's just offering a different way to get things done. Whether it's truly faster or more intuitive is still up for debate. I've gotten used to having it and sometimes miss it when it's gone, and it's not like I used the function keys on my older laptops for much of anything besides adjusting screen brightness and volume. But it was nice that you could buy a MacBook Pro without it. Now if you want a modern Mac laptop sans Touch Bar, it's the Air or bust. Nothing I said above applies to Touch ID though: It's a great feature, full stop.

The other major feature that's made its way down from the more expensive MacBook Pro models is quad-core processors. The MacBook Pro I tested has a quad-core, eighth-generation Intel Core i5 clocked at 1.4GHz; Turbo Boost can kick things up to 3.9GHz under heavy loads. That's a big step forward from the dual-core, seventh-generation i5 that the entry MacBook Pro had before. And as I noted previously, it's an even more significant advantage over the MacBook Air, which uses Intel's lower-power Y-series processors. It's far easier to push those processors to the limits -- so if your needs extend beyond basics like web browsing, video, music, chat and so on, the new MacBook Pro will be a lot snappier.

While the entry MacBook Pro's processor is clocked much slower than the more expensive options (1.4GHz vs. 2.4GHz), that difference didn't slow me down in practice. Given that Apple is targeting it at college students and more general-purpose users, going with a less powerful option isn't a big surprise. Most of what I do isn't terribly intense, but we all know that modern web browsing with a dozen or more tabs can still put the hurt on an otherwise powerful computer. Pros who make their living editing photos and videos or coding large projects will probably want to spend their money on a faster MacBook Pro. But enthusiasts who like to push their computers a bit will find they have more room for that with this new Pro compared to the Air. 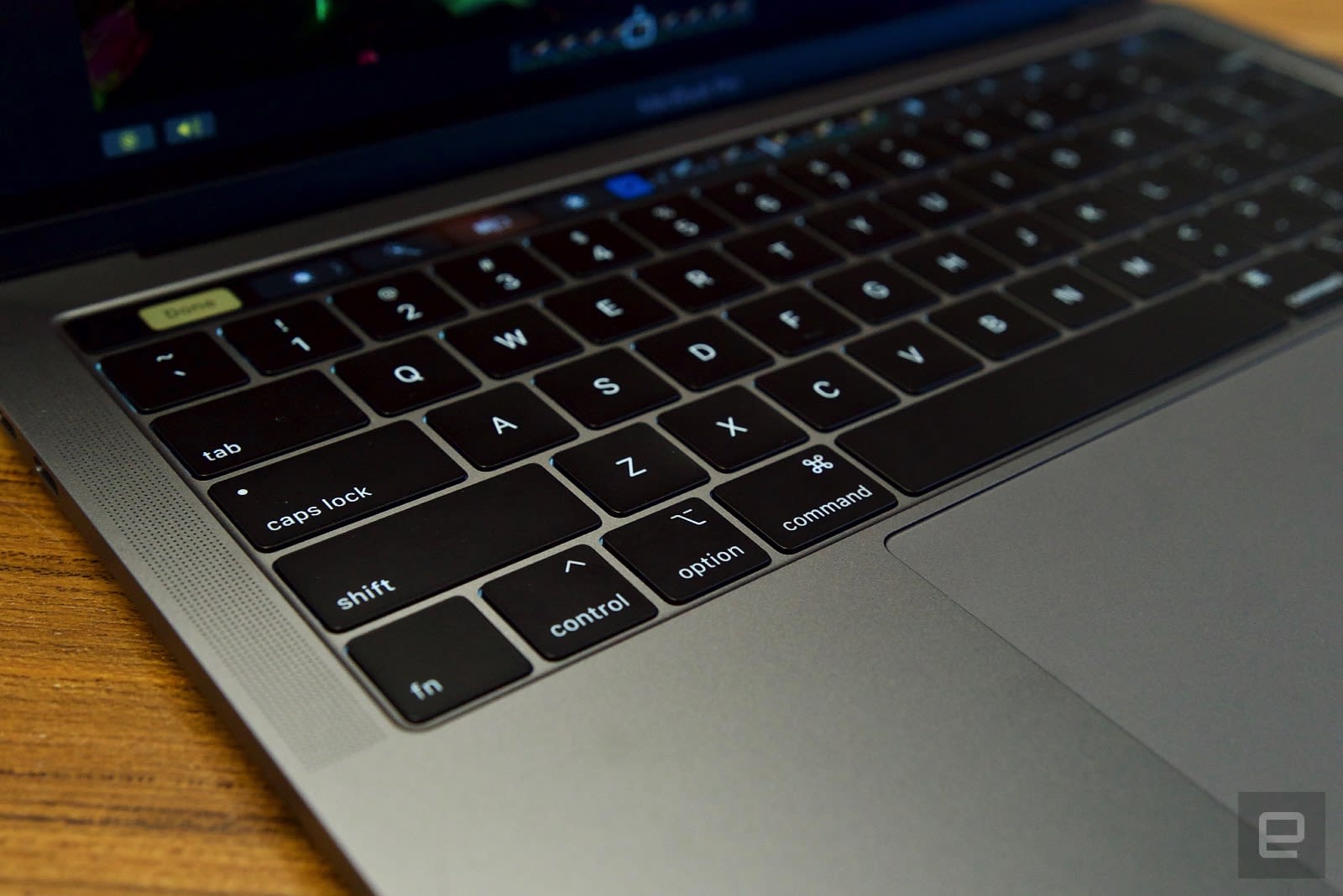 Geekbench scores show a modest improvement in single-core performance over the previous model, but multi-core performance has nearly doubled. I compared the Geekbench 4 scores I got from this new Pro to the faster, more expensive model Apple introduced in May, and they were pretty comparable. It's a bit of a surprise, but the new Pro is actually a pretty good value when compared to the more expensive models. It's not a cheap laptop, but the performance increase over the Air is massive for an extra $200.

Unfortunately, the lower clock-speed processor didn't translate into any big battery-life gains. As with most MacBooks Apple has released in recent years, the new Pro doesn't come close to hitting the company's promised 10 hours of "wireless web" usage. I got the low-power warning after about seven hours, time that was mostly made up of using Safari, Slack, iTunes, Messages, Trello, Bear and Todoist. So not just wireless web browsing but nothing that's terribly intensive. It's a bit better than I've gotten using Apple's high-end, 13-inch MacBook Pro from 2018, but only by an hour or so. At the least, the Pro exceeded Apple's battery estimates for watching video through iTunes. I got the low-battery warning after looping a movie for 11 hours and 10 minutes, and it played on for another 20 minutes before giving up completely. 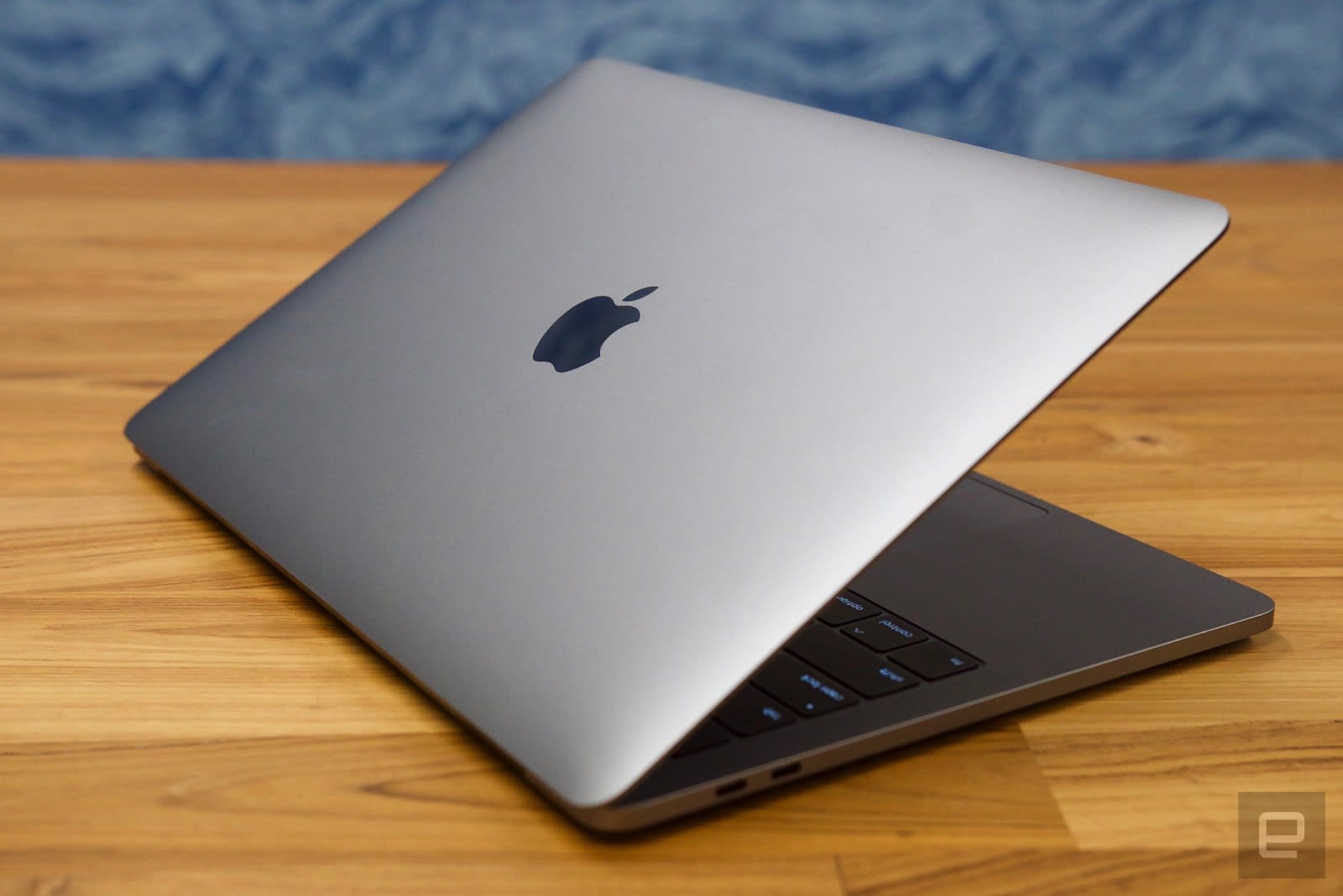 This update makes picking the right MacBook a lot easier. If your needs are fairly modest, get the Air. But if you plan to push your computer, spend the extra $200 on the Pro. It'll get you far better performance and still won't break the bank. The usual MacBook caveats still apply; if you had problems with the keyboard or port selection before, that hasn't changed. But a week ago, it was foolish to recommend that anyone buy the entry-level MacBook Pro. Now it might be the best all-around laptop Apple sells.

All products recommended by Engadget are selected by our editorial team, independent of our parent company. Some of our stories include affiliate links. If you buy something through one of these links, we may earn an affiliate commission. All prices are correct at the time of publishing.
View All Comments
Apple 13-inch MacBook Pro review (2019): This is the one