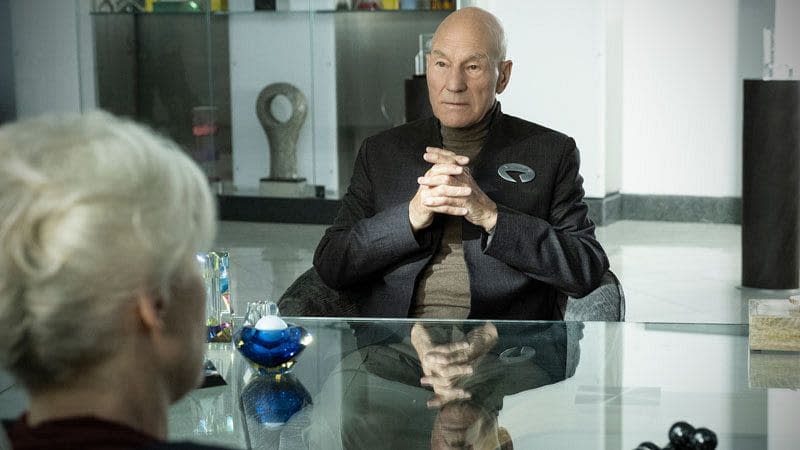 Star Trek: Picard feels like a watershed decision in the streaming TV wars: A show so niche that it cannot possibly find a mainstream audience. I'm not complaining since it seems to have been designed to appeal to my fanboy brain. But is Amazon going to get the army of new worldwide subscribers with a show this hostile to newcomers?

Star Trek: Picard will stream on CBS: All Access in the US, air on Space/Crave in Canada, and be available on Amazon Prime in the rest of the world. It's likely going to have cost Jeff Bezos' mega-retailer a pretty penny, since CBS has proved to be a tough negotiator. Star Trek Discovery, after all, was paid for in full by Netflix, which also got the right to distribute the show outside of the US and Canada. It would be a surprise if Amazon didn't also foot the bill for some, or all, of Picard's glossy production.

From the looks of the Comic-Con preview and the trailer, Picard may not be the friendliest show to reel in new audiences. The trailer features a septuagenarian Picard, broken after the failed evacuation of Romulus and the death of Lt. Cmdr Data. He's approached by a mysterious woman who says that she feels "safe" around him before being (apparently) kidnapped. Picard then recruits a ragtag bunch of people to rescue her, presumably from the clutches of the Borg, who also feature in the 2:22 clip.

Any show can gloss over its backstory, and a Comic-Con trailer would, naturally, be designed to appeal to the faithful. But it's hard not to notice that, to understand almost anything from the trailer, you'd need to be elbows-deep in Trek lore. The evacuation of Romulus comes from the off-screen backstory from Star Trek (2009), Data's death from Star Trek: Nemesis (2002). And if the Borg are involved, you'll also need more than a passing knowledge of Star Trek: The Next Generation (1987 - 1994).

It's not that Picard's source material is old, per se, but that these are hardly the sort of moments people remember that fondly. Jonathan Del Arco, who plays the "saved" Borg Hugh, appeared in two episodes of TNG, and was notable enough to be on the Comic-Con panel. Similarly, there are trailer shots of Brent Spiner playing the Data prototype B-4 (from 2002's Nemesis) and Jeri Ryan's Seven of Nine. That's a character who appeared in the back half of Star Trek: Voyager in an attempt to pep up the show's flagging ratings.

In fact, the bulk of this new show's backstory comes from the period when Trek was on a downward slide. Nemesis was a box-office flop, making $67.3 million on a budget of $60 million, alienating mainstream audiences and killing the Star Trek franchise at theaters. Voyager, too, saw its audience slide from double digits at the start of its first season to limping along with around 3 million by the end. The pitch for Picard seems to be aimed squarely at the demographic who stuck around when Trek circled the drain, and that wasn't a lot of people.

All in all, it's a ballsy move from showrunner Michael Chabon, the Pulitzer-prize winning author of The Amazing Adventures of Kavalier and Clay and (bits of) Spider-Man 2, who is in charge of Picard. Rather than glossing over Star Trek's darkest days, he's chosen to embrace them.

That's also a big departure from the last three times Star Trek has been revived, which opted to ditch the 50-plus year continuity. JJ Abrams' Star Trek (2009) explicitly takes place in an alternate "Kelvin" timeline, while Enterprise (2001) and Discovery are both (originally) set in the days before the classic series.

It meant that all three could claim to be friendly to newbies, although many of Star Trek's tentpole features are embedded into the culture. Even if you haven't heard of Kirk, Spock, Vulcan hand signals and 'boldly going', the pitch was that you were never going to get too lost here.

On the other hand, Netflix has demonstrated that good-quality TV will be binged by people who love nothing more than '90s nostalgia. It has the complete "prime" Star Trek timeline series -- the shows made from 1966 through 2005. So it's a cruel irony that the show that would most reward a whole-series binge (or, at least, edited highlights) is on a rival streaming service.

Even in the US, Amazon only has five Star Trek movies in its library, although it does include First Contact and Nemesis. Both of those are likely to be in the very long list of required viewing in the run-up to Picard's debut if it's as dense as the trailer makes it out to be.

As a non-US viewer, I can sympathize with fans who feel that they're being unfairly milked here. The first season of Picard will last 10 episodes, which means UK viewers will be paying at least £17.97 ($22.50) for three months' worth of Prime Video. It's not clear if the show will ever make it to broadcast TV, although the signs don't look particularly good. So the question is: are there enough people in the Trek faithful to make this sort of show work?

In this article: av, Borg, Brent Spiner, entertainment, Jeri Ryan, Michael Chabon, Patrick Stewart, Picard, Star Trek, Star Trek Picard
All products recommended by Engadget are selected by our editorial team, independent of our parent company. Some of our stories include affiliate links. If you buy something through one of these links, we may earn an affiliate commission.