These sport a refined, yet beefed up output in the company's lightest form factor yet.

I've been using AfterShokz bone conduction headphones ever since I reviewed them in 2015 and they've become an inseparable part of my bike rides. The open-ear design allows me to pump up my soundtrack, while still being able to hear traffic and other goings on around me. Improvements have come incrementally with a few notable leaps, but the new AfterShokz Aeropex model seems to be the culmination of the past years' developments. It's lighter than the previous Air model (Trekz being dropped from the product name), with better sound and improved waterproofing which should keep them from being susceptible to repeated outpourings of sweat.

The new AfterShokz Aeropex is available starting today for $159.95. I've had the chance to use them for the past couple of weeks, so I can provide some perspective on how this new model works, especially in comparison to previous versions.

As always, I need to provide the caveat to people who are new to bone conduction headphones. While these sound great for what they are, there's no comparison to using over-ear or in-ear headphones. Also, the open-ear design diminishes the output when you're in loud environments. If a subway happens to be barreling away alongside me while I'm crossing the Manhattan Bridge on my bike commute to work, I get an earful of train noise drowning out the details of my music. Ultimately, the open-ear style isn't ideal for every moment if you're into full immersion. Additionally, if you have long hair, you'll likely have to tie it into a pony tail to wear these properly and if you're rocking a big cranium I'd try them on for sizing first.

That said, the Aeropex has the loudest volume capability to date from AfterShokz and in a slimmer form than ever. It fills your head with sound in a pleasing way while also allowing you to perceive the outside world. Sometimes while riding I have to dial back the volume since they're blasting away a bit too loud. Unless it's quiet though, I do usually run 85-100 percent volume levels. On the other end of the spectrum, you can viably carry on conversations and hang out with people while keeping a non-stop flow of tunes going at low volume -- if you can handle that much stimulation. And as I've said before, these are great for turn-by-turn directions when other people are in the car or even as headphones for video calls and music while at your computer.

When AfterShokz launched the Titanium version in 2016, the form became a metal reinforced flexible and rubbery exterior. This was carried over to the Air in 2017 and further slimmed down for comfort. The Aeropex has been dialed back in scale a few notches more, leaving an ultra lightweight and almost imperceptible feel when being worn. Importantly, the transducer that rests on your cheek has less mass and the over-the-ear portion of the headset is now almost comfortably compatible with wearing sunglasses. Before this, it was doable, but far from ideal. You will note a change in the materials though, if you drop the headset or toss it on the table. Before it was a rubbery impact, whereas now it's a clacking sound. I'm sure they're just as durable, but they feel a bit more precious now. 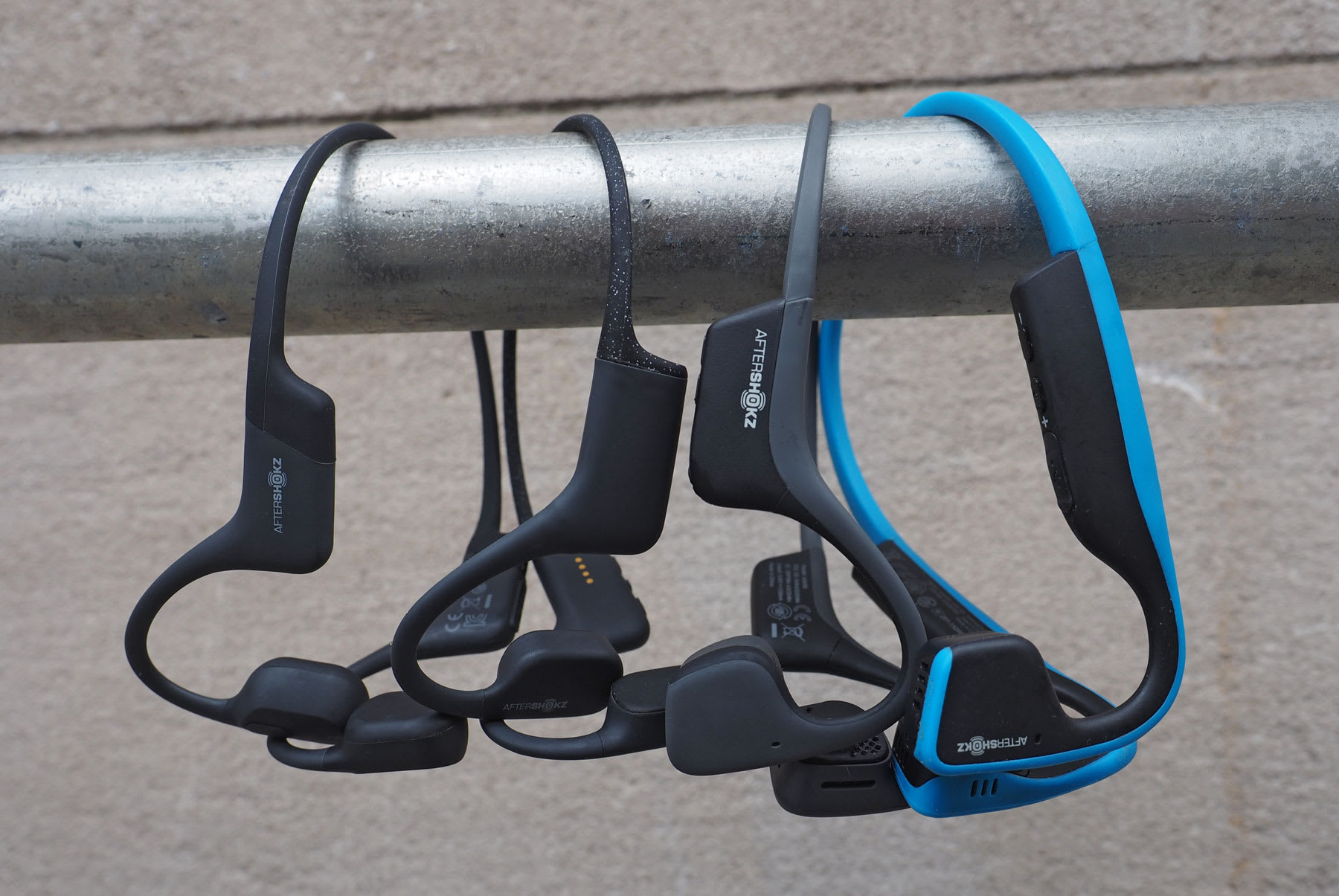 The controls will all be familiar with a combo power on /volume up /pairing button and a volume down next to it. On the left transducer you will find a multifunction button, which you'll primarily use for starting, stopping or skipping tracks. It can also answer calls (which I never do, spam!) and even redial the last call. This accidentally happens to me every once in a while and I'm always scrambling to remember how to cancel it, so it's far from my favorite feature. 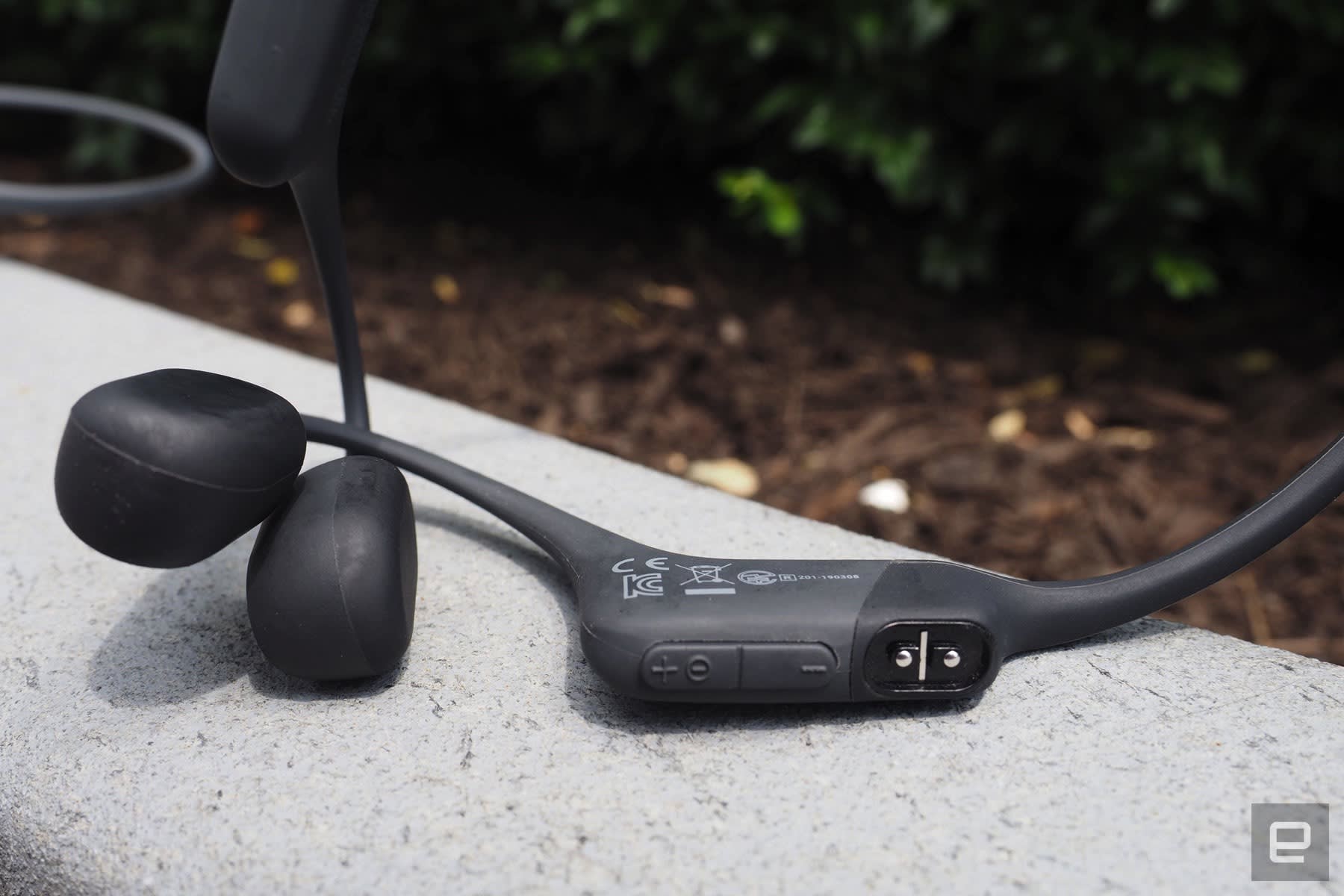 A two-second press of this button also calls up your phone's assistant, be it Google or Siri. Trying to activate this feature and not just the start/stop playlist function is... challenging. When I managed to nail the timing on my tests, I failed to get a vocal response to my inquiries. The phone registered the request, but I didn't hear anything over the headphones. AfterShokz checked and confirmed the feature works, though, so I'll chalk it up to my aging OnePlus 5 or a weird settings issue for now.

While the Aeropex has one of the smallest form factors from AfterShokz yet (it's actually similar to the upcoming Xtrainerz) the battery life has increased. The Air had up to 6 hours and up to 20 days standby. Aeropex has up to 8 hours, but only up to 10 days standby. I've usually taken several 20-30 minute rides without worrying to charge them and while a long standby time is great if you don't use your device, 10 days is more than enough for even occasional users. You can also get a status check with a quick click of the power/+volume button when not playing audio. 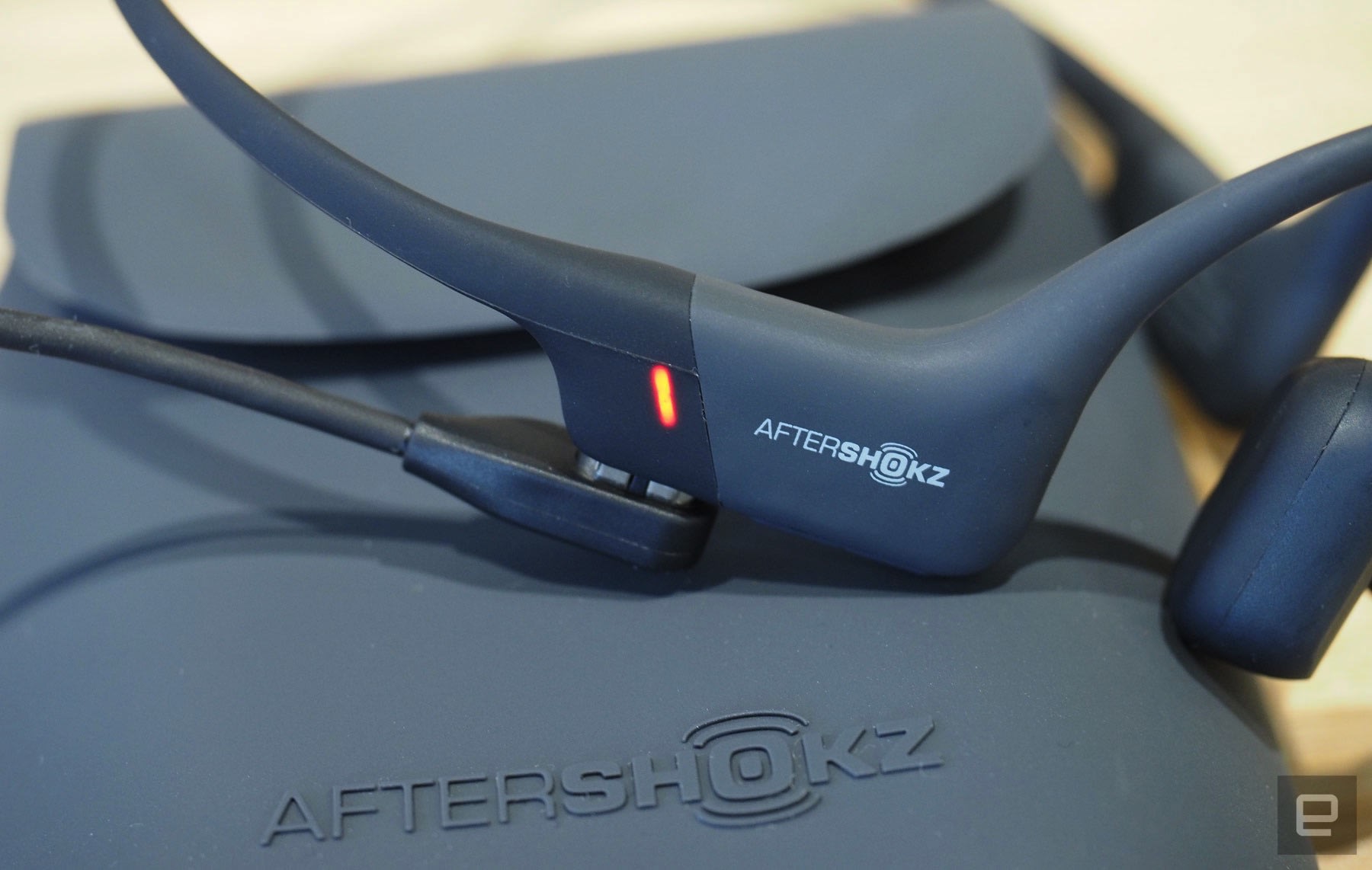 On the topic of charging, there's a new proprietary cable for this headset. Like many devices nowadays, it has a magnetic connection making it easy plug in without hunting for the right angle or side of a microUSB. And amazingly so, I'm told that each device will come with two cables! This sidestepped one of my first thoughts when using proprietary cables, having to bring it with you all the time. Now if you commute, you can just keep one at work. Also, they'll be selling them for $14.95 each if you're in the habit of losing them.

The external charging surface doesn't have a cover this time around, so it's possible you'll have water or sweat there if you set them down to recharge right after a workout. In order to avoid any problems with the battery, the system has an alert when the charger is connected and it detects moisture, so you can wipe it off first.

All in all, if you've been a fan of AfterShokz or bone conduction headphones in general, these are undoubtedly the best ones I've tried to date. The old Titanium version still kicks out some volume, but in a brute force type of way with lots of vibration on the cheek and a bulkier fit overall. It's still a great budget pick, especially since the price has dropped to $79.95 and will fit on bigger noggins. The Air is also still on the market at a discount ($119.95) and works well. I'd say save up a bit to get the new Aeropex ($159.95) though, if you can swing it. They're incredibly light and the audio output is decently loud, while also a bit more refined than the other two.

There's no definitive word on the swimming-focused and entirely waterproof Xtrainerz that we tested at CES, but those are a 4GB on-board storage model without Bluetooth. If you want an all around performer, Aeropex is the one I'd recommend right now. 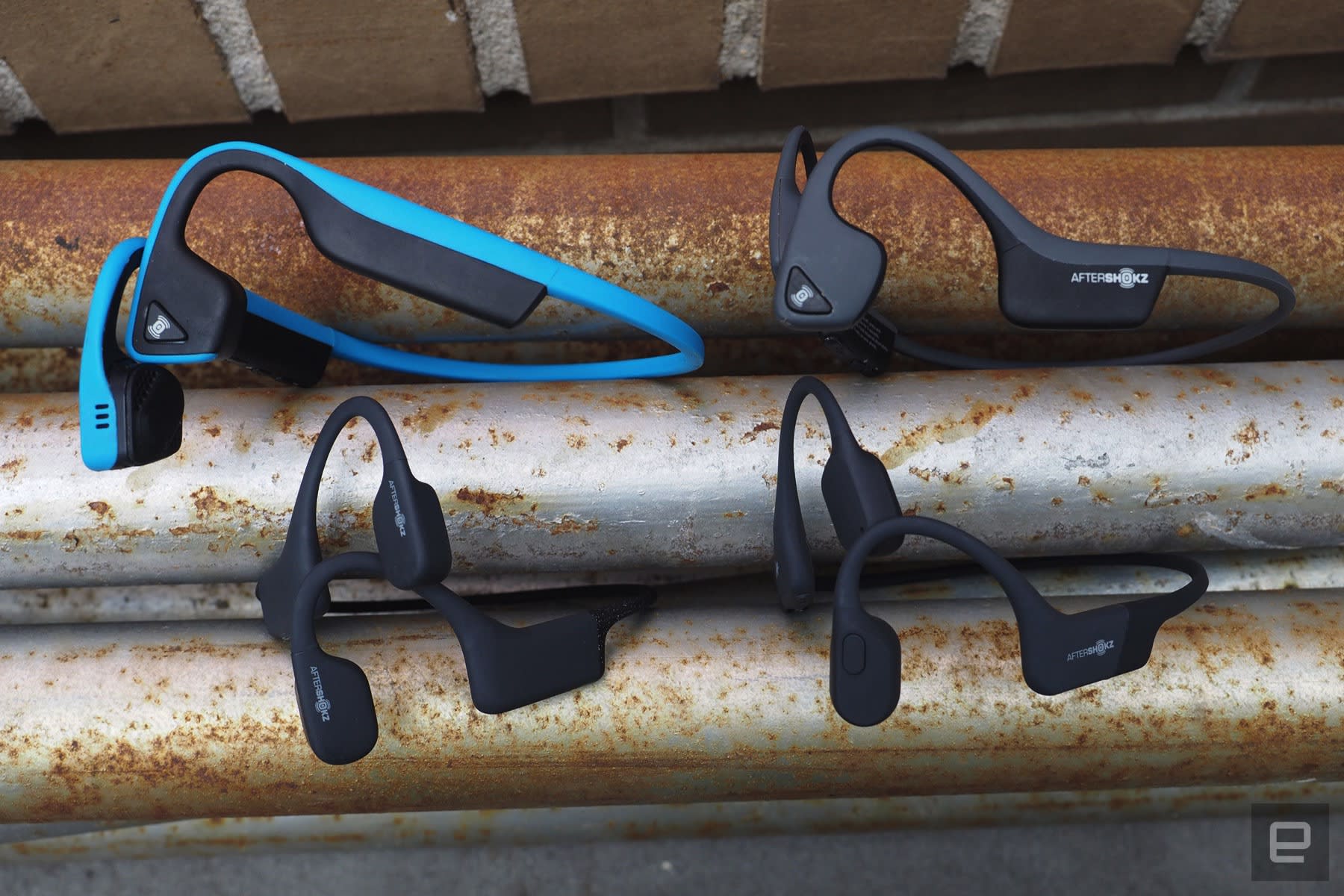