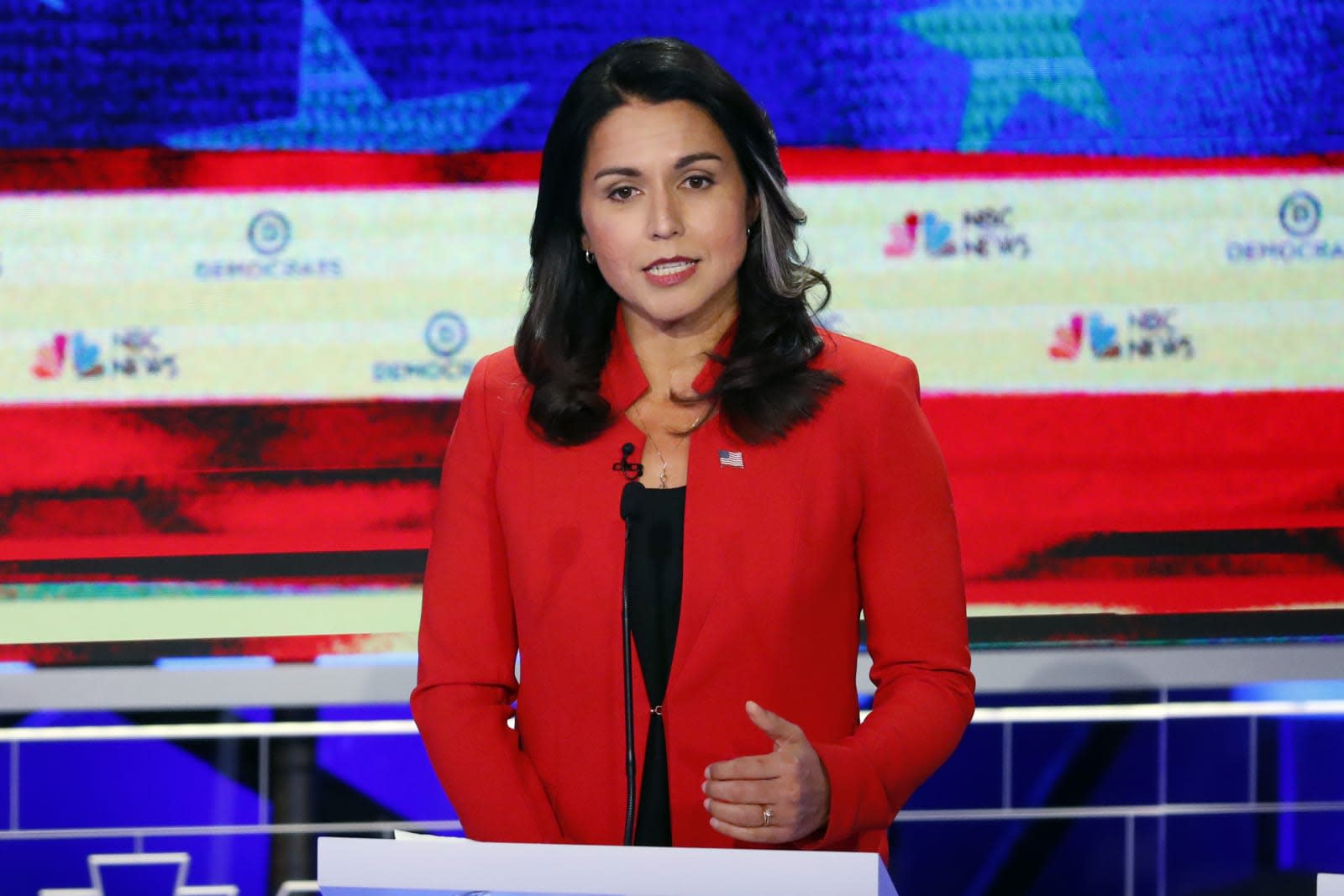 Tulsi Gabbard, one of the many Democratic presidential hopefuls, is suing Google for at least $50 million. Gabbard filed a federal lawsuit against the company today, claiming that it suspended her campaign's advertising account for six hours following the first Democratic debate. Doing so, the lawsuit reportedly states, infringed on Gabbard's free speech.

According to The New York Times, after the first debate, Gabbard was briefly the most searched-for candidate on Google. Purchasing ads would have helped the campaign get its website at the top of the search results, Tulsi Now Inc. said. The campaign team also believes its emails were being placed in Gmail spam folders at "a disproportionately high rate" compared to other Democratic contenders.

TULSI2020: In the hours following the 1st debate, while millions of Americans searched for info about Tulsi, Google suspended her search ad account w/o explanation. It is vital to our democracy that big tech companies can't affect the outcome of elections https://t.co/n7Y7y2dQZ9

Google told The New York Times that its automated systems flag unusual activity from advertisers, like a sudden increase in spending. "In this case, our system triggered a suspension and the account was reinstated shortly thereafter," a Google spokesperson said. "We are proud to offer ad products that help campaigns connect directly with voters, and we do so without bias toward any party or political ideology."

Gabbard was relatively unknown before the first Democratic debate, but one of the issues she has gained bipartisan support for is her suspicion of big tech. According to the lawsuit, she sides with Senator Elizabeth Warren in the call for large tech companies to be broken up -- Warren recently had an ad criticizing Facebook removed and then restored by the platform. While this lawsuit may not go anywhere, it is believed to be the first time a presidential candidate has sued a major tech firm. It's a bit surprising that it's coming from a Democratic candidate, given that most of the recent censorship complaints and bias accusations have come from Republicans.

In this article: 2020, ads, advertising, big tech, business, campaign, candidate, censorship, debate, democratic, free speech, gmail, google, internet, lawsuit, politics, presidential, spam, suspended, tomorrow, tulsi gabbard
All products recommended by Engadget are selected by our editorial team, independent of our parent company. Some of our stories include affiliate links. If you buy something through one of these links, we may earn an affiliate commission.