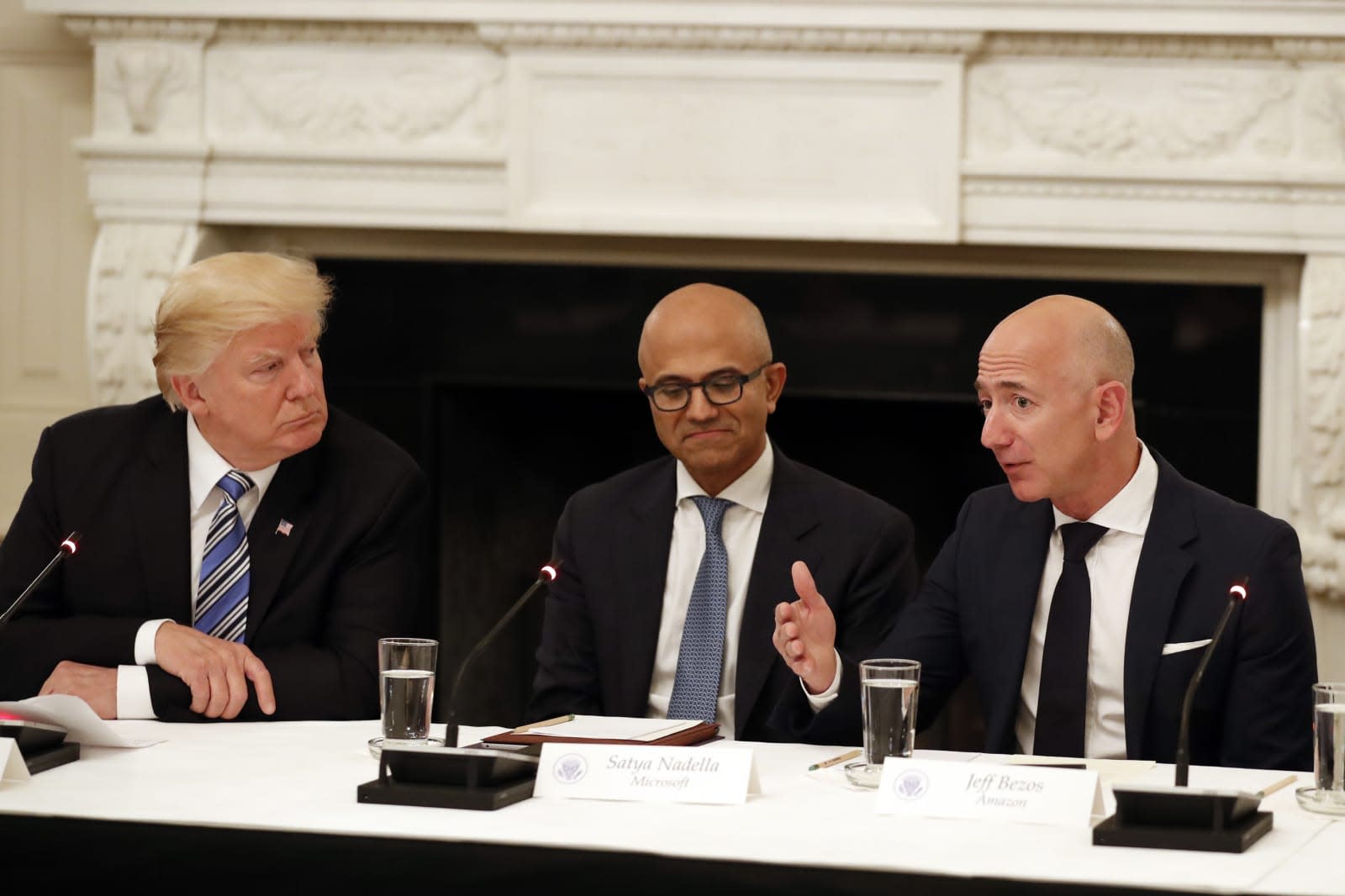 The Pentagon has temporarily halted its $10 billion cloud-computing competition after President Trump suggested that the bid might be rigged in favor of Amazon. The process will now be reviewed by new Defense Secretary Mark Esper, and a spokesperson said that "no decision will be made on the program until he has completed his examination."

The Pentagon wants a single supplier for its JEDI cloud computing system that will house critical personnel and intelligence data, while allowing it to better compete with China in the field of AI. Four parties were selected in the bidding, including IBM and Oracle, but the Pentagon has whittled it down to just two suppliers: Microsoft and Amazon.

Oracle tried to stay in the game by arguing to Congress that the bidding process was unfair. The company's talking points made their way to a group of representatives, who asked Trump to hold any contract awards until the Pentagon had examined irregularities or conflicts of interest.

We believe that it is essential for our national security to move forward as quickly as possible with the award and implementation of this contract.

In response, Trump asked Pentagon officials to review the process. "They are saying it wasn't competitively bid," he said on July 18th. "Some of the greatest companies in the world are complaining about it... I will be asking them to look at it very closely to see what's going on because I have had very few things where there has been such complaining."

Trump has criticized Amazon and Bezos (the owner of the Washington Post) in the past, but issues with the JEDI contract predate the President. In particular, competitors have been concerned about meetings conducted by former Defense Secretary Jim Mattis between AWS VP Teresa Carlson and Jeff Bezos himself in 2017. The Guardian also discovered that an Amazon VP had contact with US government procurement services about the creation a purchasing portal.

In July, though, a court ruled that Oracle's bid didn't meet government requirements, and the Government Accountability Office found that the bid was fair. The Pentagon, meanwhile, called Oracle's allegations "the subject of poorly-informed and often manipulative speculation."

And while some US representatives want to put the brakes on the bid, others want it to continue. "We believe that it is essential for our national security to move forward as quickly as possible with the award and implementation of this contract," said Rep. Mac Thornberry (R-Texas), on behalf of the House Armed Services Committee.

In this article: Amazon, CloudComputing, Contract, Defense, DoD, gear, JEDI, Microsoft, Oracle, politics, security
All products recommended by Engadget are selected by our editorial team, independent of our parent company. Some of our stories include affiliate links. If you buy something through one of these links, we may earn an affiliate commission.