The spinning bezel’s back. (In spirit.)

Samsung released the Galaxy Watch Active less than six months ago, but that doesn't mean it's too soon to move on to bigger and better things. Case in point: The Galaxy Watch Active 2, which the company is unveiling today. It's a slightly more premium version of the original and sits in the middle of Samsung's lineup, between the flagship, full-featured Galaxy Watch and the basic, affordable Watch Active. It offers pretty much everything the higher-end watch does but for $50 cheaper, and even offers some new tools that its more expensive sibling lacks.

The Galaxy Watch Active 2 will be available in two sizes: a 1.2-inch 40mm option and a 1.4-inch 44mm one. Both feature slightly curved Super AMOLED screens that looked bright and inviting during a recent demo, where I saw both devices ahead of their official launch. With these bigger screens, the Watch Active 2 addresses one of my few complaints about its predecessor, which was that a 1.1-inch panel felt too cramped to easily navigate. The roomier canvas, particularly on the 44mm model, is definitely more finger-friendly and makes text easier to read.

The other thing this larger display makes easier is... watching videos on your wrist, if that sounds appealing to you. Maybe you can't wait till you get off the crowded train to pull out your phone for the Marvel movie trailer that just dropped, because spoilers are everywhere? Frankly, I can't find a solid use case for this feature, especially when it seems like it'll drain the watch's battery, but if nothing else it works as advertised. During our demo, a Samsung rep pulled up a YouTube video on his 44mm Watch Active 2 and showed us how to play, pause, rewind and fast forward. This is a player with all the basic functions covered; I'm just not sure it needs to exist.

Another feature that puzzles me is the new Google Translate app for the watch. In theory, I get it: Rather than pulling out your phone in a foreign land, it's handier to just swipe a few times on your wrist. But smartwatches today are still painfully slow at tasks like translations, whether because of their underpowered processors or sluggish cellular connections. You'll have a better experience on your phone.

And if we're talking about times when you've left your phone behind and only have your LTE-connected Watch Active 2 on you, let's put it this way: How many times are you going to, say, go on a phone-free run in France and suddenly need to talk to someone who doesn't speak English or your language? On the occasions that you do, Google Translate on your watch will be infuriatingly slow. This feature is nice to have, but like an SOS button this is probably something you should think of as a last resort than a reason to buy the watch.

So why should you consider getting the Watch Active 2 instead of its stablemates? In addition to offering most of the pricier Galaxy Watch's features for $50 less, Samsung also upgraded the sensors to make them more sensitive (and presumably more accurate). The Watch Active 2's heart rate monitor has eight LEDs instead of four on the Galaxy Watch and Watch Active so it's faster as well. The device's accelerometer can detect up to 32G of force -- twice the 16G that older models could sense. This potentially means double the accuracy when tracking your fitness, according to Samsung. The Watch Active 2 also has a new ECG sensor onboard, although it isn't being used for anything yet. The company said this feature is still in the research phase and that it's working with partners on ideas for implementing it.

As for exercise-oriented functions, Samsung updated its onboard coach to offer better pacing guides during runs. You start by setting your goals -- whether it's to complete a certain distance by a target time or something more abstract like "fat burning." The coach will show you a rundown of how much time it expects you to spend running slowly or more quickly. Then, during your run, it tells you through the watch's speakers or paired Bluetooth headphones when you need to pick up the pace. The device will also buzz when you need to speed up. Although I didn't actually go on a run during my brief hands-on time, I observed the Watch Active 2 prompt a Samsung rep to go faster after a short warmup period in an exercise-focused demo. It seemed helpful, but I'll need to review it myself to determine if that's truly the case. 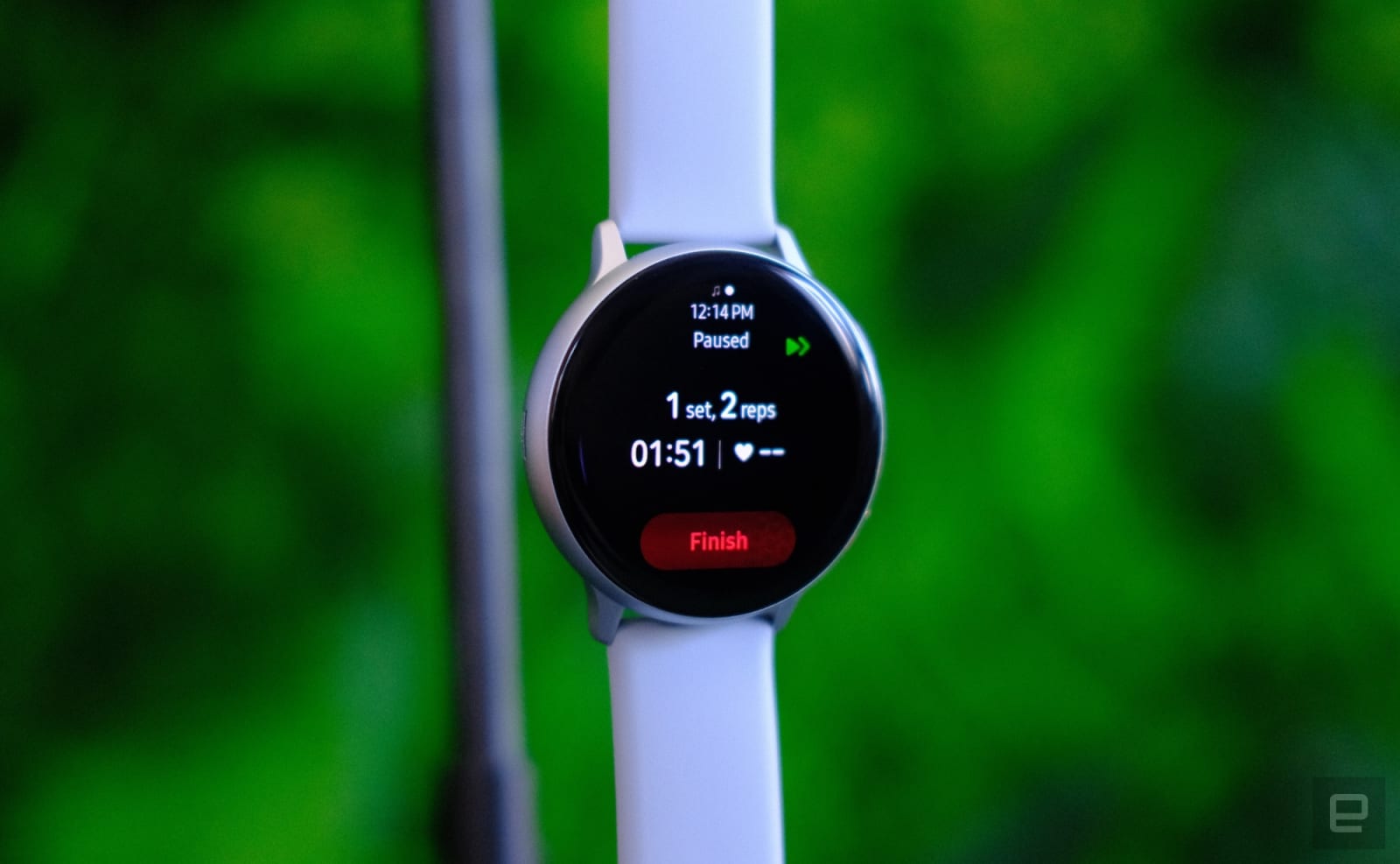 In my experience testing a variety of smartwatches, Samsung's Tizen OS is the best wearable platform for people with Android phones. In fact, I keep going back to the Galaxy Watch after testing other devices. Tizen does a lot more than Fitbit OS, and it's more proactive and health-centric than Wear OS. Samsung hasn't done much to Tizen in the past year or so, other than adding new features like calculating your stress based on your heart rate variance, as well as breathing exercises.

Frankly, I'm already satisfied with Tizen and didn't feel the company needed to change much. But navigating the platform is sometimes confusing -- you just keep scrolling sideways till you find the widget or app you want. With the Watch Active 2, Samsung upgraded Tizen with its One UI design to make the system look cleaner, though during my demo I barely noticed anything different. Besides the new video player and Google Translate app, the Watch Active 2 also offers Spotify improvements, so you can more easily sign in to your music account with a single login via your Samsung account.

In addition to those software tweaks, the Watch Active 2 has a new tool called My Style that comes up with custom designs for your home screen. You can take a selfie of your outfit with your phone's camera, then use the Samsung Wearable app to come up with a selection of about five patterns to use as the background for your watch face. The wallpapers are generated in the app each time you take a picture, which means they're pretty unique. I wasn't particularly impressed, though. The designs resulting from my purple-and-peach outfit didn't seem to complement what I was wearing at all and looked generic. I also prefer using pictures of people and things I love, but for those looking for something more abstract, this could be helpful. I just don't see anyone using this tool frequently. Plus, other smartwatch makers like Fossil also offer a similar function, so this isn't giving Samsung any competitive advantage. 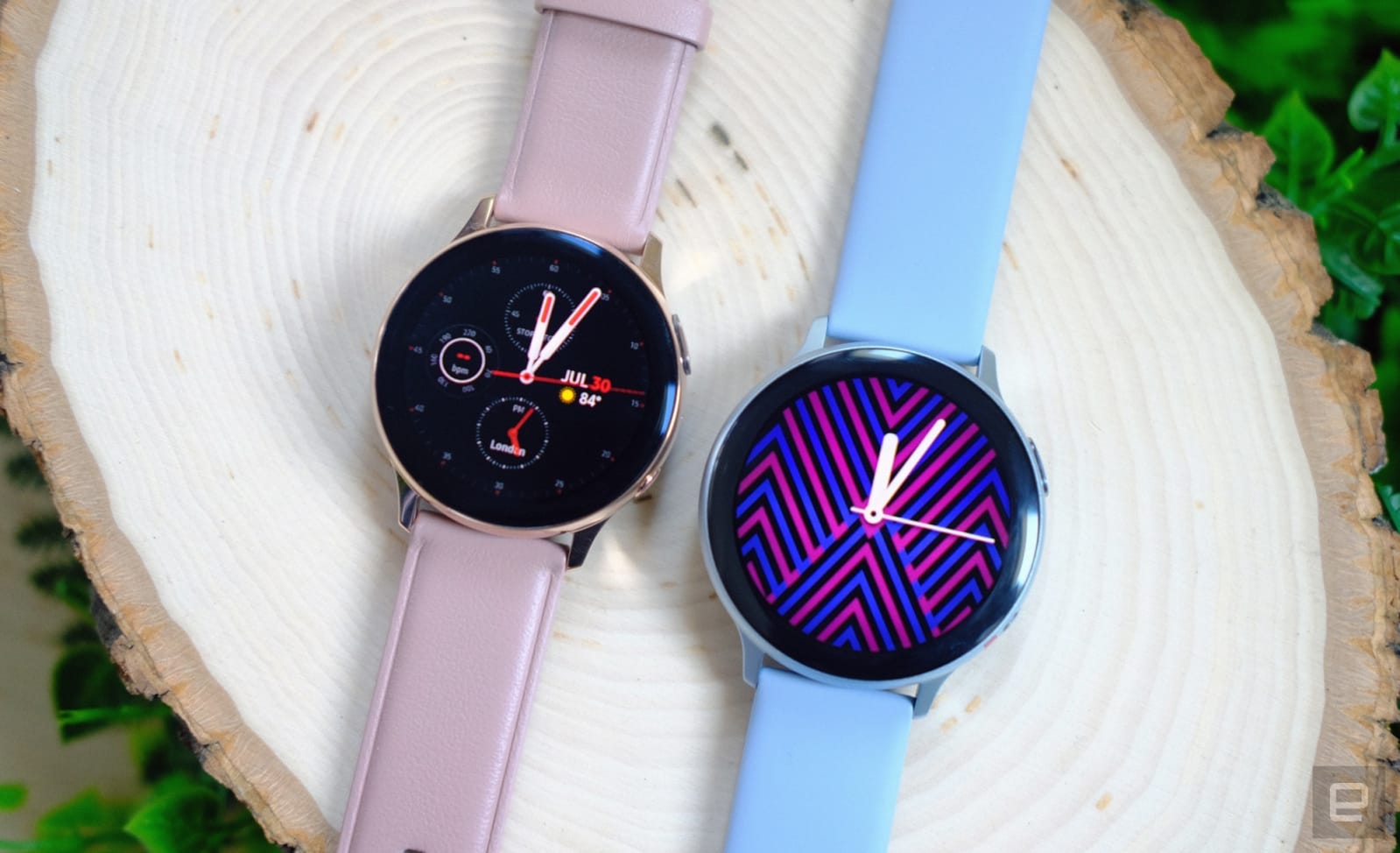 I do like the Watch Active 2's appearance, though. Two materials are available for the watch case: aluminum and stainless steel. All of the LTE models are made of stainless steel. These are available in blue and pink, as well as a plain shade of gray. Aside from the colors and the attractive curved display, there's not much flair here; the Watch Active 2 looks almost as generic as the original.

Those software and aesthetic updates didn't excite me, but I was stoked about the Watch Active 2's touch-sensitive bezel. I'm a big fan of the rotating bezel on the Galaxy Watch (and the Gear line before it); there's something satisfying about turning that wheel and feeling each notch click into place. I was pleasantly surprised when I dragged my finger around the Watch Active 2's face and felt haptic feedback that mimicked those clicks. It's not an exact recreation of that physical sensation, but it's close.

I like that this gives users another way to quickly scroll through Tizen OS's endless widgets. That said, it doesn't replace a physical rotating bezel. With the Galaxy Watch, if you've got the order of your pages memorized, you could potentially navigate your watch without looking at its face, simply by counting the number of notches you've clicked past. That's not possible with this phantom bezel.

Although I'm confused by some of the Watch Active 2's new features, I left my hands-on demo impressed by what it offers for the price. I have lingering questions about its battery life and some of the yet-to-launch software features. Those are things I'll have to revisit in my full review.

Speaking of the sort, the Watch Active 2 will be available on September 27th starting at $280 for the 40mm model and $300 for the 44mm, so you'll have plenty of time before you need to make a decision. And who knows, given the rate at which it's been launching them, Samsung might already have another watch to unveil by then.