The company's biggest Note yet is an upgrade in every way.

For the first time ever, Samsung is launching two new Note phones at once: the 6.3-inch Note 10, which is actually smaller than last year's model, and the new creme de la creme, the Note 10+. It's a leap forward in almost every way: Its 6.8-inch screen is the biggest display Samsung has ever shoved into a Note device, and there's also a 5G version for people who just can't wait to jump on next-generation networks. While it's a bit confusing to see two new phablets from Samsung, especially when there's also the big-screen Galaxy S10 5G, it's yet another way the company can flex its smartphone muscle.

[Check out our extensive hands-on of the Galaxy Note 10 and Note10+!]

The first thing you'll notice about the Note 10+ is its gorgeous all-screen display. Gone are the top and bottom bezels of the Note 9. Now, the front camera sits in a cut-out in the center of the screen. Samsung's Galaxy S10 featured a punch-hole 10-megapixel front camera at the top right, while the Note 9 had its camera within the bezel. The new look is a bit more seamless and symmetrical -- you certainly won't miss the front camera, but it feels like less of an afterthought.

Design-wise, the Note 10+ keeps the rectangular shape of past models, making it look a bit more professional than the curvy S10 and S10+. Its 6.8-inch AMOLED screen features HDR10+ and runs at an incredibly sharp 3,040 by 1,440 pixels (498 ppi). For Note 9 owners, it's definitely the more enticing upgrade -- the Note 10's smaller 6.3-inch display also has a lower resolution than last year (2,280 by 1080 pixels). By offering a slightly tinier Note, Samsung might be making a play for more casual consumers who want something newer than the Galaxy S10. That leaves the Note 10+ as the offering for more demanding users. 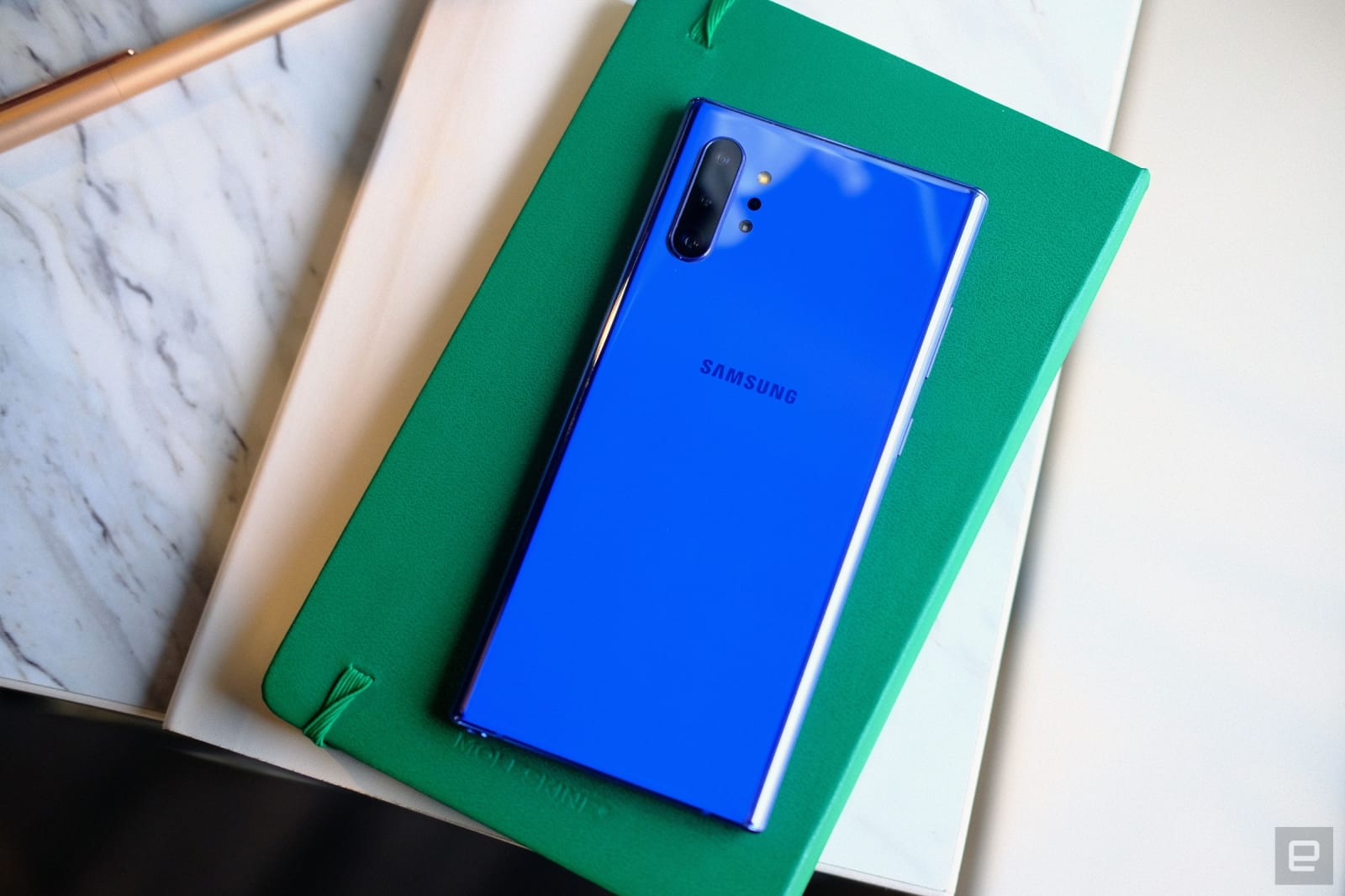 Under the hood, the Galaxy Note 10+ is powered by Qualcomm's flagship Snapdragon 855 processor and 12GB of RAM (the Note 10 only has 8GB). You've also got a choice between 256GB and 512GB storage, and there's a microSD card slot to add even more. For all of the new hardware though, neither Note 10 device has a headphone jack. That's a bit hard to swallow given how large they are, but I suppose that's the reality we're living in today.

Given that it's a much larger device than its smaller sibling, the Note 10+ also packs in a significantly larger battery: 4,300 mAh, compared to 3,500 mAh. That should be a huge help for the 5G model, which will likely be an even bigger power vampire. Samsung isn't giving us many details on the 5G entry, by the way -- it'll be just two grams heavier, but otherwise identical to the LTE model.

As for its rear cameras, Samsung is basically redoing what we saw on the S10 5G. There's an ultrawide 16MP shooter; a wide-angle 12MP lens; a 12MP telephoto lens; and a VGA depth-vision camera for augmented reality apps. And yes, the S-Pen is still here, and now it has a built-in accelerometer and gyroscope. That lets you use air gestures, like flicking the pen up and down to change cameras in the photo app. It's not a first for Samsung -- we saw it on the Galaxy Tab S6 last week -- but it could still be useful for people who multi-task with its stylus.

Of course, the Note 10+ will cost you a pretty penny: It'll start at $1,099, while the 5G version will cost $1,299. You'll be able to snag the Note 10+ at major carriers and retailers on August 23rd. But if you're hankering for 5G, that'll only be available from Verizon at first, with T-Mobile, AT&T and Sprint to come later.