The iconic all-in-one computer has been with us for a long time.

At Engadget, we spend every day looking at how technology will shape the future. But it's also important to look back at how far we've come. That's what This Week in Tech History does. Join us for a recap of historical tech news, anniversaries and advances from the recent and not-so-recent past. Today, Apple's first iMac is a whopping 21 years old.

If it wasn't for the iMac, Apple as we know it today wouldn't exist. No iPod, no iPhone, no Apple Watch, no MacBook with its unreliable keyboard. (So, not all bad.) Seriously, though, that might be slightly hyperbolic, but when the iMac was released on August 15th, 1998, Apple was in desperate need of a hit. Most Apple fans know the story: Steve Jobs returned to the company in 1997, after Apple bought his company Next. He took over as interim CEO that September, and immediately set about tightening up the sprawling mess of products Apple was producing. But in May of 1998, Steve Jobs introduced the first product that came to define his next decade at Apple; it went on sale three months later.

The bulbous iMac took the same form as the original Macintosh — an all-in-one computer with a CRT display — but was updated for the '90s with a CD-ROM drive and a colorful, translucent design. It was the first new product that Jony Ive worked on after Jobs promoted him to senior VP of industrial design, and it was initially a bit polarizing.

Specifically, Apple chose to drop the time-tested floppy disk drive in favor of the CD-ROM, perhaps the most notable of the many times it cut ties with legacy tech. But in a useful nod to the future, Apple designed the iMac with "two-step" access to the internet via a built-in model or Ethernet jack as a primary selling point. It was also the first Mac with USB ports, an interface standard that came to dominate the computer industry. Apple also used the PowerPC G3 processor on the iMac, the same chipset at the heart of the high-end Power Macintosh line. 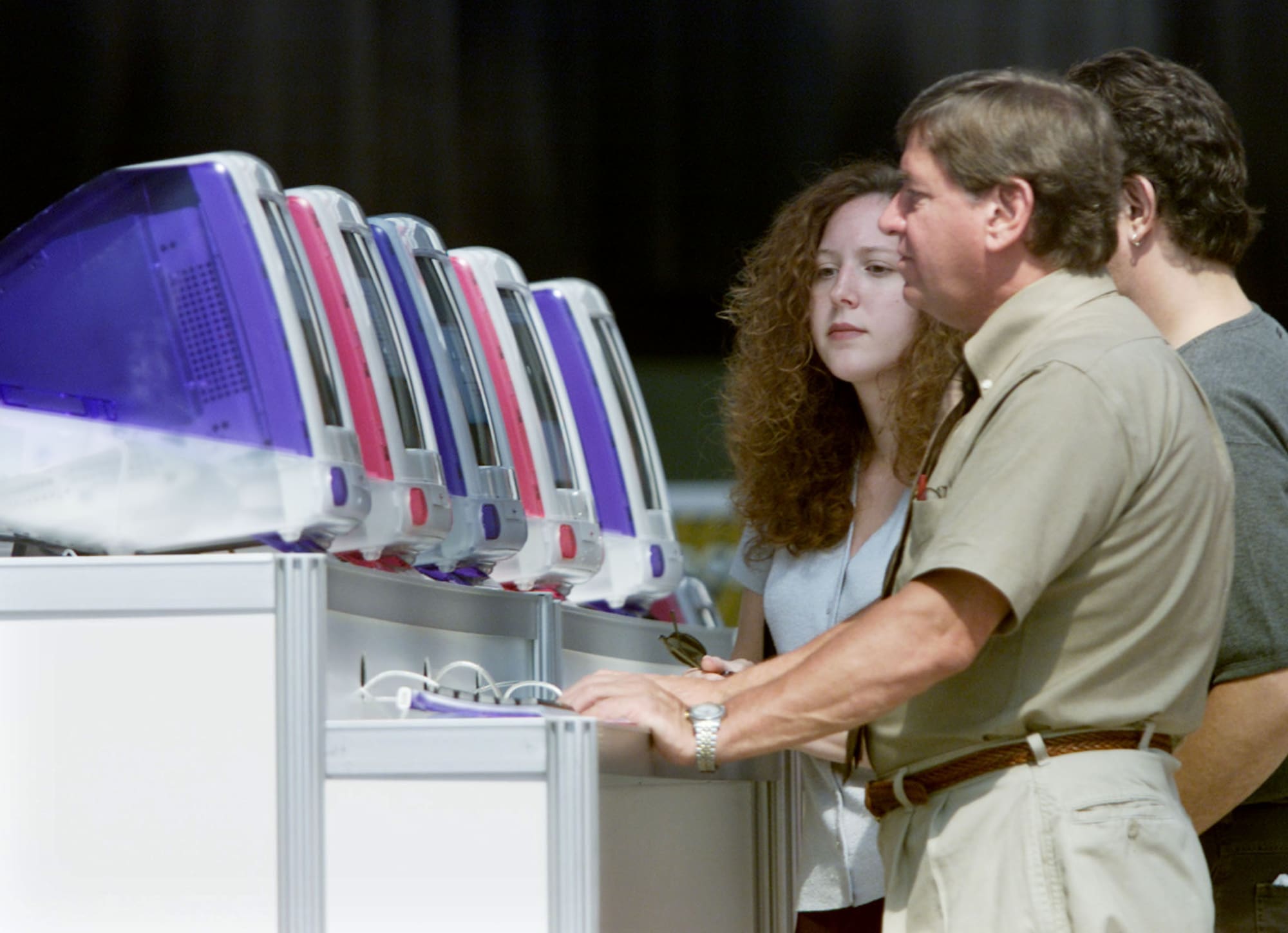 While the iMac didn't exactly reverse Apple's fortunes overnight, it did provide the company with some much-needed momentum. The iMac was well-received by the press and became a late '90s icon, with plenty of companies mimicking the see-through color enclosure. It's the kind of device that popped up in various TV shows, particularly those that had kids using a computer in school; the iMac was well-received in the education market, after all.

In the years since Apple released the iMac, laptops have vastly outstripped desktops in popularity, but the company has nonetheless kept revising the iMac. It's seen some radical changes since its 1998 debut, starting with 2002's iMac G4. As CRTs were rapidly being replaced by flat-screen monitors, Apple had to go back to the drawing board and completely change the iMac's fundamental design. 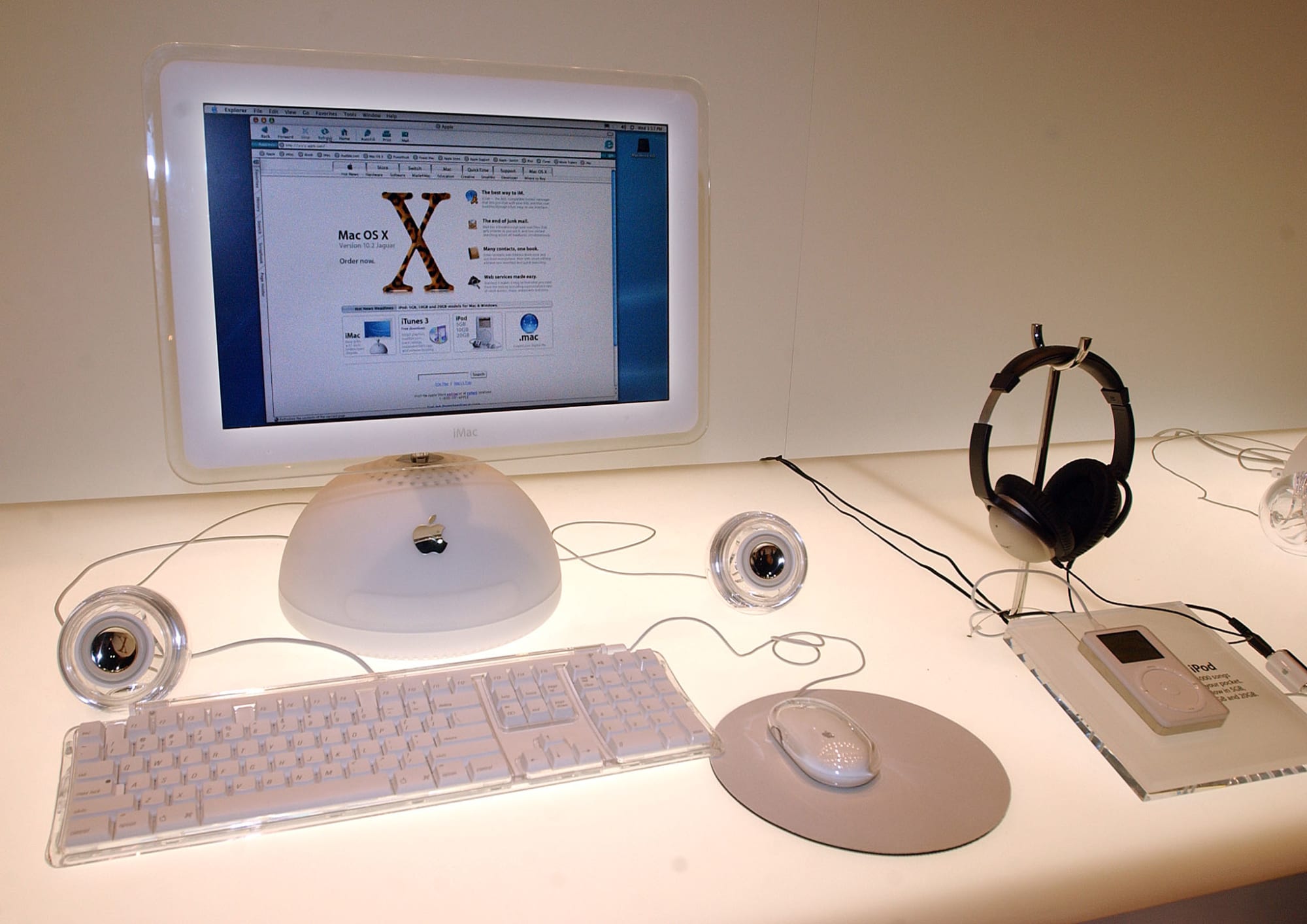 Instead of a monitor with the guts of a computer packed around it, the sunflower-inspired iMac G4 had a floating flat-panel display with the computer hardware encased in a dome-like base. It was a striking piece of technology, but the higher costs of flat-screen displays meant the new iMac couldn't quite compete on price the way its predecessor did. Simultaneously, the G4 processor was lagging behind Intel's offerings, making the iMac a bit of a tough sell for a few years despite its iconic design.

Less than three years after the iMac G4 was released, Apple replaced it with yet another entirely new design. While the iMac G4's didn't last, the iMac G5's basic design template has been in use by the company ever since its introduction in 2005. Like the original iMac, the 2005 revision essentially felt like a monitor hiding the computer's internals. But this time, it was packed into a relatively thin flat-screen display. Sure, by today's standards, that iMac looks chunky, but at the time it was the closest Apple had come to making a computer that was all screen.

Apple has been refining that experience ever since, making the iMac significantly bigger, thinner and more powerful over the years. By 2009, the slim aluminum iMac was barely distinguishable from a standard monitor, the large "chin" found below the screen in earlier models all but gone. Apple took an "if it's not broke, don't fix it" approach with iMac design over the last decade or so, but it's still impressive how much computing power the company is able to shove inside such a relatively thin case. For the best evidence of that, look at the beastly iMac Pro. That $5,000 rig has a limited audience, but there's no doubt it's an impressive, powerful machine. 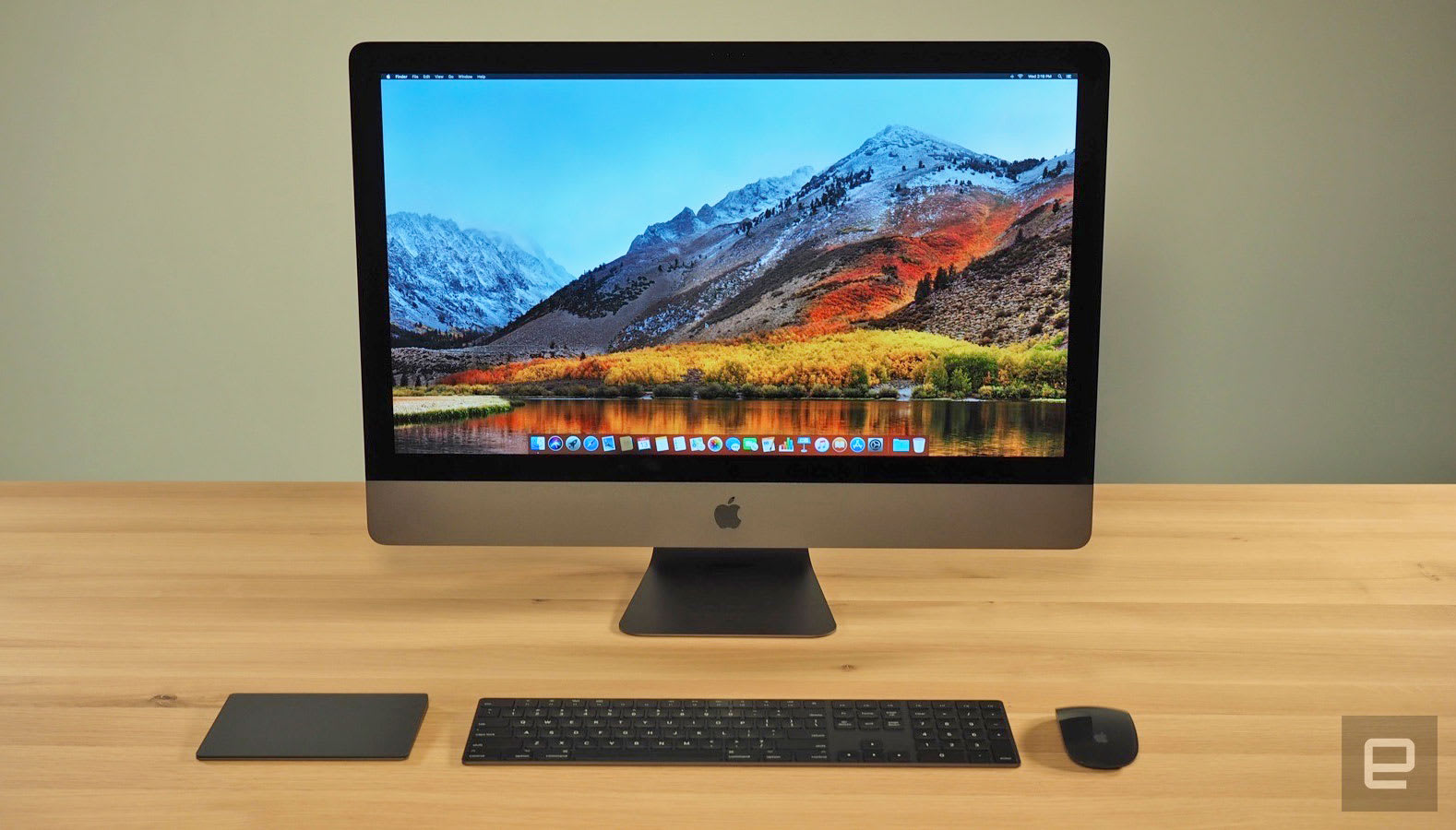 As laptops have grown significantly more capable, desktops like the iMac have increasingly been relegated to the background. But surprisingly enough, Apple's commitment to the iMac hasn't really wavered over the years. The company might not update them with the same frequency anymore, but the iMac still hits a wide range of price points and use cases, from basic computing all the way up to... whatever it is people do with the iMac Pro. At a certain point, the iMac might go away -- nothing lasts forever in the computer world. But Apple has sold an all-in-one Mac pretty much since the computer line arrived in 1984, so I'm not going to bet on the iMac disappearing any time soon.