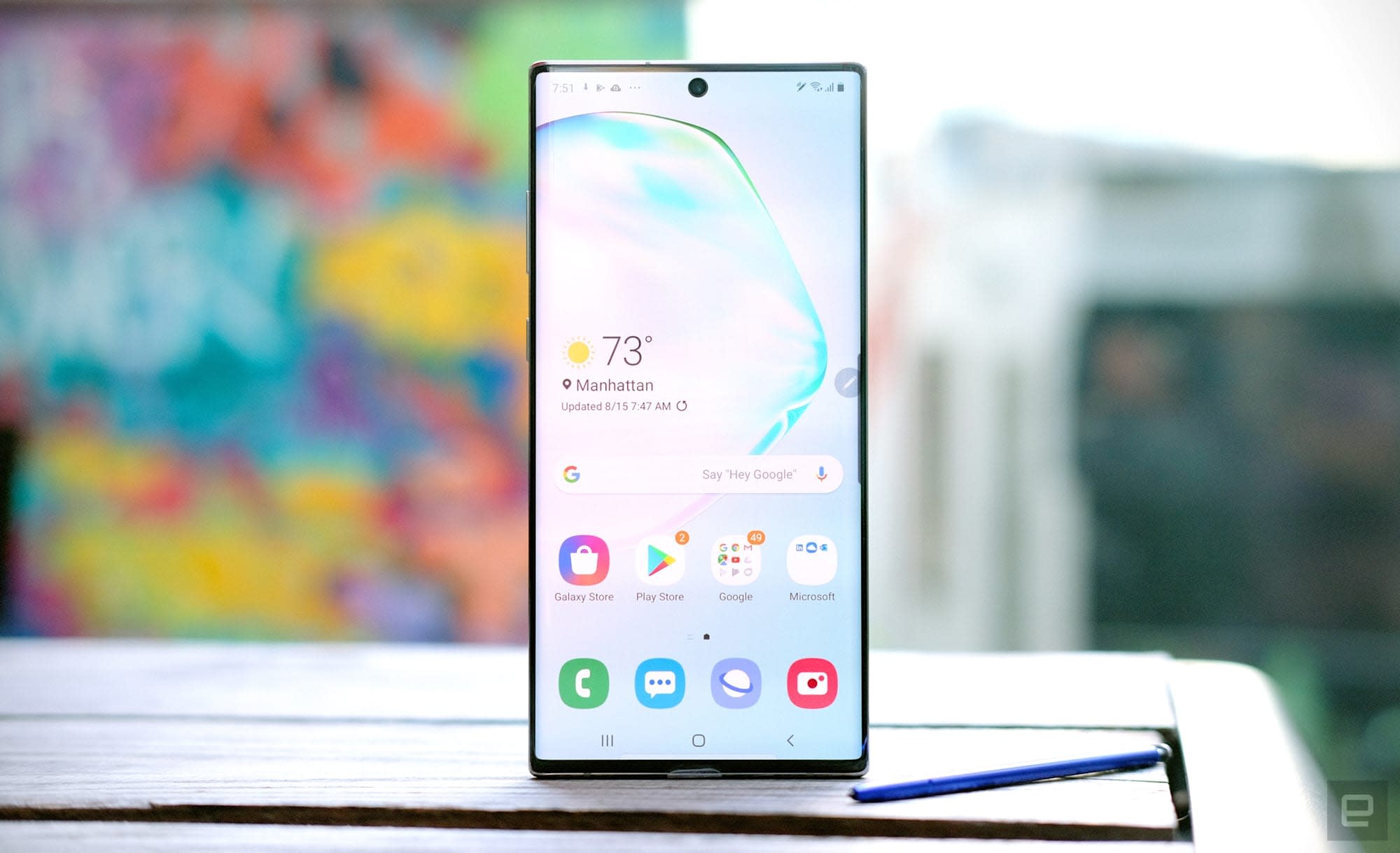 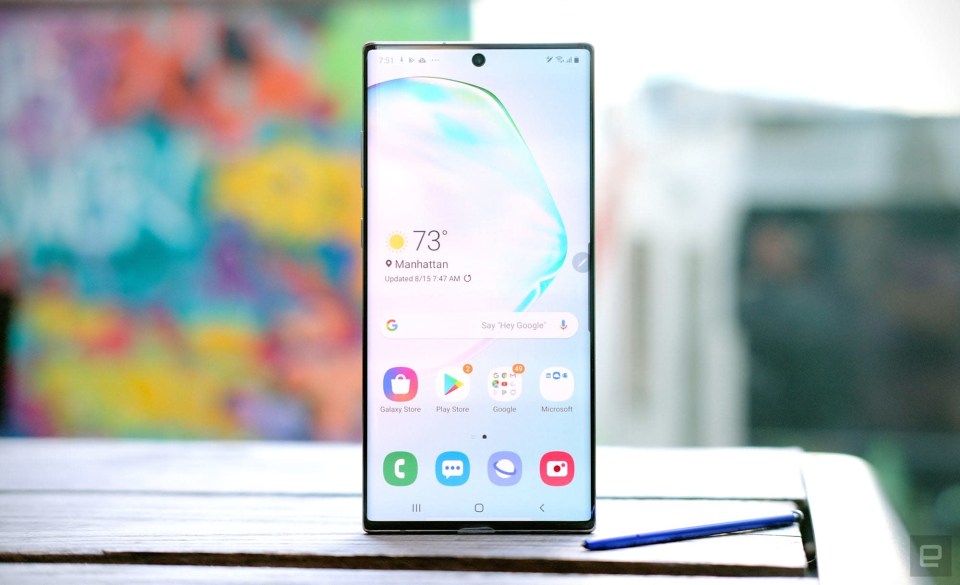 Very early yesterday morning, I picked up a shiny new Galaxy Note 10+ (in that trippy Aura Glow finish, no less). We'll have our full review completed soon, but after 24 hours of fiddling with it, there are a few features and flourishes that are worth digging into right now.

Samsung's mastery of smartphone screens is well-known, and the 6.8-inch Dynamic AMOLED one here is nothing short of excellent. (If it means something to you, DisplayMate has a fairly gushy evaluation you can read here.) What people have been more concerned about is whether the center-aligned front-facing 10-megapixel camera is any more distracting than the cutouts on the Galaxy S10 series. Well, I'm pleased to report I never really notice it. Yes, its placement is somewhat more prominent, but Samsung's work in making the cutout smaller means it's very easy to ignore.

No surprises here — the Note 10+ more or less uses the same rear triple camera system and time-of-flight sensor as the Galaxy S10 5G, and they're still excellent. Colors are lush and vibrant, and photos come out with a remarkable level of detail, though some of you might not like the extra sharpening Samsung's software does. One of the more notable changes here is that the 12-megapixel telephoto camera has a slightly wider aperture, which helps when shooting in the dark. The handful of telephoto shots I've taken in the do look surprisingly good, but I haven't had time to make a direct side-by-side comparison with the Galaxy S10 yet.

Despite rumors that suggested Samsung might use an updated variant, the Note 10 and 10+ use the same Snapdragon 855 that pretty much every other flagship this year does. (Note: This is true of my US-spec model, but some international versions will use one of Samsung's Exynos chips instead.) It's still a powerhouse though, coupled with 12GB of RAM and Qualcomm's Adreno 640 GPU. As a result, the Note 10+ absolutely flies, but the same could be said of any flagship phone.

I recently started writing out notes and reminders on paper instead of typing them into my phone. The Note 10+ is supposed to give me the best of both worlds by letting me write out my notes with the S Pen and then turn that into searchable text. I've got to say, I'm impressed by how quickly the Note 10+ can parse my chicken scratch. I've been able to search for specific items in my shopping list mere moments after hitting save. And apart from some issues with recognizing spaces between words, the Note has done a decent job converting my writing into readable text.

This might just be a me thing, but the smaller Note 10 is way more comfortable to use than this big one. If you're a big phone fan, the Note 10+ might be OK, especially since it's roughly the same size as last year's Note 9. Even as a guy with big hands, though, the Note 10+'s body can feel a little unwieldy at times. It doesn't really help that part of my hand frequently sits on the screen without my noticing it, leading to a few moments of confusion when my touch inputs get totally screwed up. That's all because the touch-sensitive screen curves a little further down the sides than on earlier devices, making accidental touches much more frequent. It sounds like a little thing, I'll admit, but it's starting to get pretty frustrating. When it comes to Samsung's big phones, I firmly believe the company peaked with the S10+.

Oh, and while I'm glad Samsung finally got rid of that pointless Bixby button, the fact that all of the phone's physical controls are on the left side keeps throwing me for a loop. This decision runs counter to what every other Android smartphone maker does. I often reach for a power button that's not where I expect it to be. On the plus side, though, lefties finally have a phone that feels purpose-built for them.

One of the biggest changes to the Galaxy Note formula this year is Samsung's addition of an accelerometer to its new S Pen. In case you hadn't heard, you can use it as a magic wand of sorts to trigger shortcuts and remotely perform actions in certain apps like switch between camera modes and control your media.

For now, support is limited to Samsung's first-party apps, but that's to be expected and may well change over time. My bigger concern is that Air Actions largely feel like things you'll use once or twice and never again. If you're not the kind of person who mounts their phones on tripods when taking photos, for instance, the Air Action to control the zoom level is basically useless. I'll keep testing them, but for now, consider me a skeptic.

There's a 4,300mAh battery tucked inside the Note10+, and that's the most capacious Samsung has ever squeezed into one of its Notes. It's hard to draw many meaningful conclusions after only a day, but I will say that I pulled the Note of its box at 7:45AM and it was down to around 10 percent by 6PM. (That said, I suspect some prolonged periods where I was listening to YouTube videos with the screen off didn't help.) For what it's worth at this point, Samsung's battery info reported about 5.5 hours of screen-on time when I finally plugged it in, but I'll dig into this further.

I had a few people on Twitter ask me how the Note 10+ stacks up as a tool for creators, especially now that Samsung axed the headphone jack. I spent most of yesterday playing with the S Pen, and didn't have the chance to really dig into Samsung's home-brew video editing app, or whether the crazy zoom-in audio feature really does home in on subjects in the frame. I will, however, be visiting my goddaughter for her birthday this weekend, so expect lots of cute test footage and AR doodles when we publish our full review.

I was looking forward to trying out the Note 10's new DeX features — instead of plugging the phone into a separate monitor you happen to have around, you can connect to a Windows or Mac computer and run the full DeX interface in a window. Unfortunately, that requires a companion app for your computer which won't be available until the Notes are officially released August 23, but I'm confident I'll have time to test it properly before then. Same goes for PlayGalaxyLink, that lets you stream any game installed on your PC to your Galaxy Note. It sounds like a potentially great reason to invest in a 5G Galaxy Note, but for now, we'll have to wait a bit longer

Oh, one final thing: I've been paying close attention to the questions people have been sharing with on Twitter, so drop me a line there if there's something you're particularly curious about.

In this article: galaxy note 10, galaxy note 10 plus preview, gear, impressions, mobile, note 10, note 10 plus, preview, samsung
All products recommended by Engadget are selected by our editorial team, independent of our parent company. Some of our stories include affiliate links. If you buy something through one of these links, we may earn an affiliate commission.