Scan a logo to unlock historic video highlights between the Bears and Packers.

The National Football League and Snap have made another augmented reality experience together. In celebration of the NFL's 100th season, which kicks off on September 5th, the companies are unveiling an AR Lens that lets people scan an NFL 100 logo and bring it to life inside the Snapchat app. The feature uses Snap's Marker technology, introduced in 2018, to let people use their Snapchat camera to unlock a special video created by the NFL. After scanning an NFL 100 logo, the video will show historic highlights between the Chicago Bears and Green Bay Packers, the two teams that are playing the first game of the 2019-2020 season next Thursday. And right beneath the video, as pictured above, there's a clock counting down the days, hours and minutes to the beginning of the NFL 100 season.

According to Snap, the NFL 100 AR Lens will be geofenced to the Greater Chicago area starting September 5th, meaning that only people there will see it pop up on their Lens carousel in Snapchat. That said, users throughout the US can also checkout the experience by simply scanning a Snapcode or the NFL 100 logo. Like with the rest of Snapchat's augmented reality creation tools, such as the new Landmarkers, what's going to make this NFL Lens fun for people is that they can use it to turn 2D objects into virtual experiences. Snap Marker is essentially a cutting-edge version of a QR code, which lets you do things like point your Snapchat camera at a physical mural of LeBron James and then, a second later, you're watching him dunk the ball on your smartphone's screen. 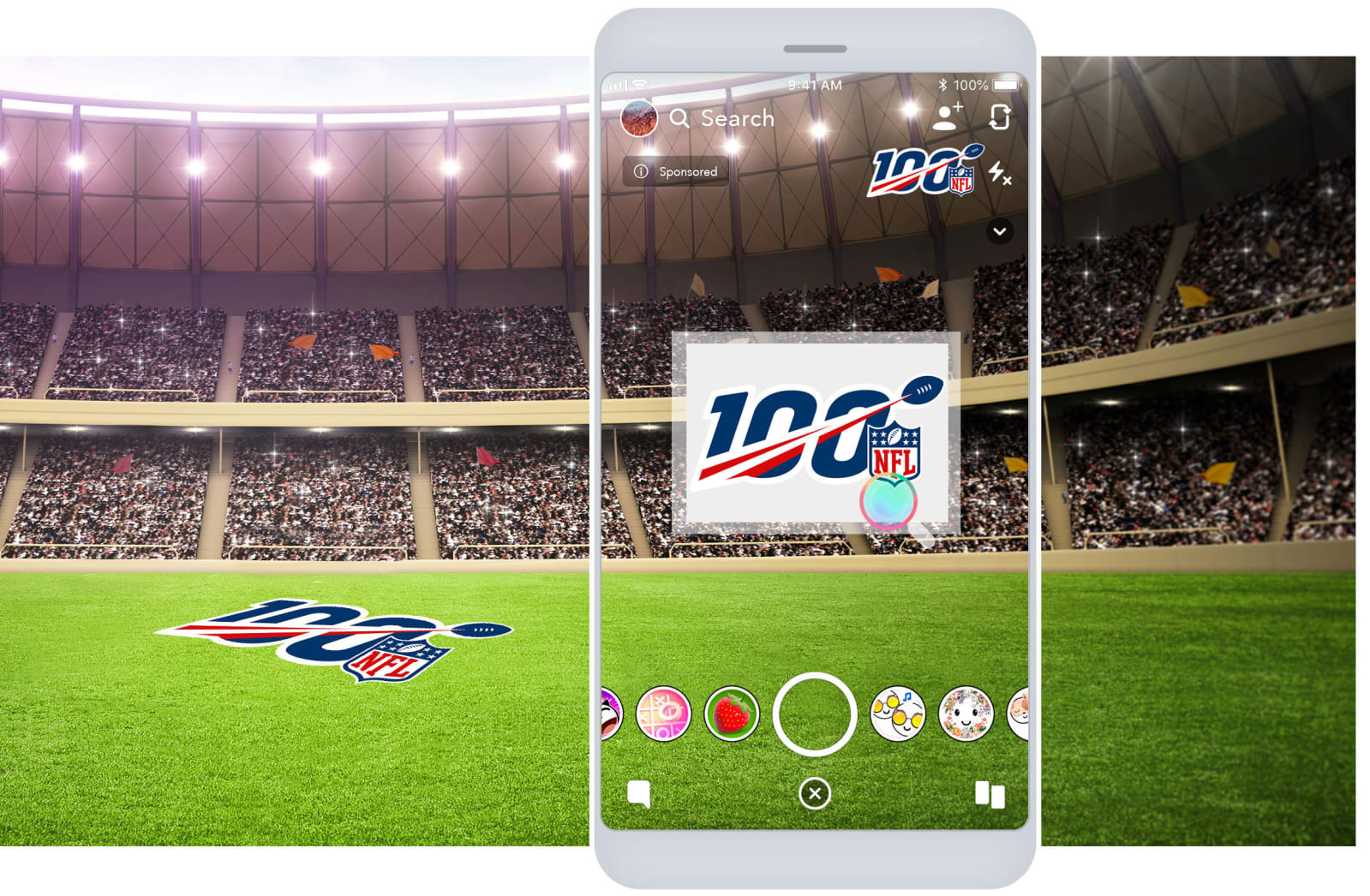 Blake Stuchin, the NFL's vice president of Digital Media Business Development, told Engadget in an interview that the league wanted to build this AR experience for Snapchat users to give them another way to express their fandom. Not only that, but he said it is a natural extension of the work the NFL has been doing with Snapchat, a partnership that started in 2015 and includes a variety of football shows the league has created for the app. "There is a depth of engagement [on Snapchat]," Stuchin said. "For example, ahead of Super Bowl [LIII], we created a sticker pack of the [two] teams a week before [the game], with limited promotion, and it was viewed more than 303 million times in Snapchat."

Aside from the AR Lens, the league will bring back its NFL highlights show for Snapchat, which Stuchin said has over 2 million viewers per week during last season. In the future, he said, the plan is to broaden the theme of the NFL's new Snapchat AR Lens and make it work with more than just this season's kick-off game, including Super Bowl rematches, rivalries and other select NFL 100 games. For Snap, meanwhile, the ongoing partnership with the NFL proves yet again that the company is going to continue using augmented reality to try to reach different audiences, as it as done with other powerful brands including the NBA, Adidas and Nike.