Snapchat can survive, but it can't do it alone

As it looks to open itself up, handling user privacy will become its biggest challenge.

Snap Inc. co-founder and CEO Evan Spiegel kicked off the first-ever Partner Summit last week in Los Angeles with a sort of syrupy soliloquy about how the Snapchat camera "lets natural light from our world penetrate the darkness of the internet." He went on to say the internet was "started as a military research project" and, therefore, "it's just not our natural habitat." The point Spiegel was trying to make (I think) is that building a platform like the internet is a collaborative process. And he sees Snapchat as a world where good things can happen, but he doesn't want to build it alone.

Spiegel said that by "opening" the Snapchat camera, the company can create "a computing experience that combines the superpowers of technology with the best of humanity," including "friendship, compassion, creativity, generosity and love." His speech, which came off like a particularly over-the-top Aaron Sorkin monologue, was intended to convey a simple message: the importance of partnerships for Snapchat's success.

Spiegel's words were followed by a slew of announcements that, if all goes according to his plan, could help Snap grow and make more money -- which, in turn, would appease investors. While Snap has increased its earnings year over year since becoming a publicly traded company in 2017, its user numbers have mostly remained flat at 186 million daily uniques since 2018. That's a lot less than social media rival Instagram, which has 1 billion monthly active users. Twitter, for its part, has a daily user base of 126 million. 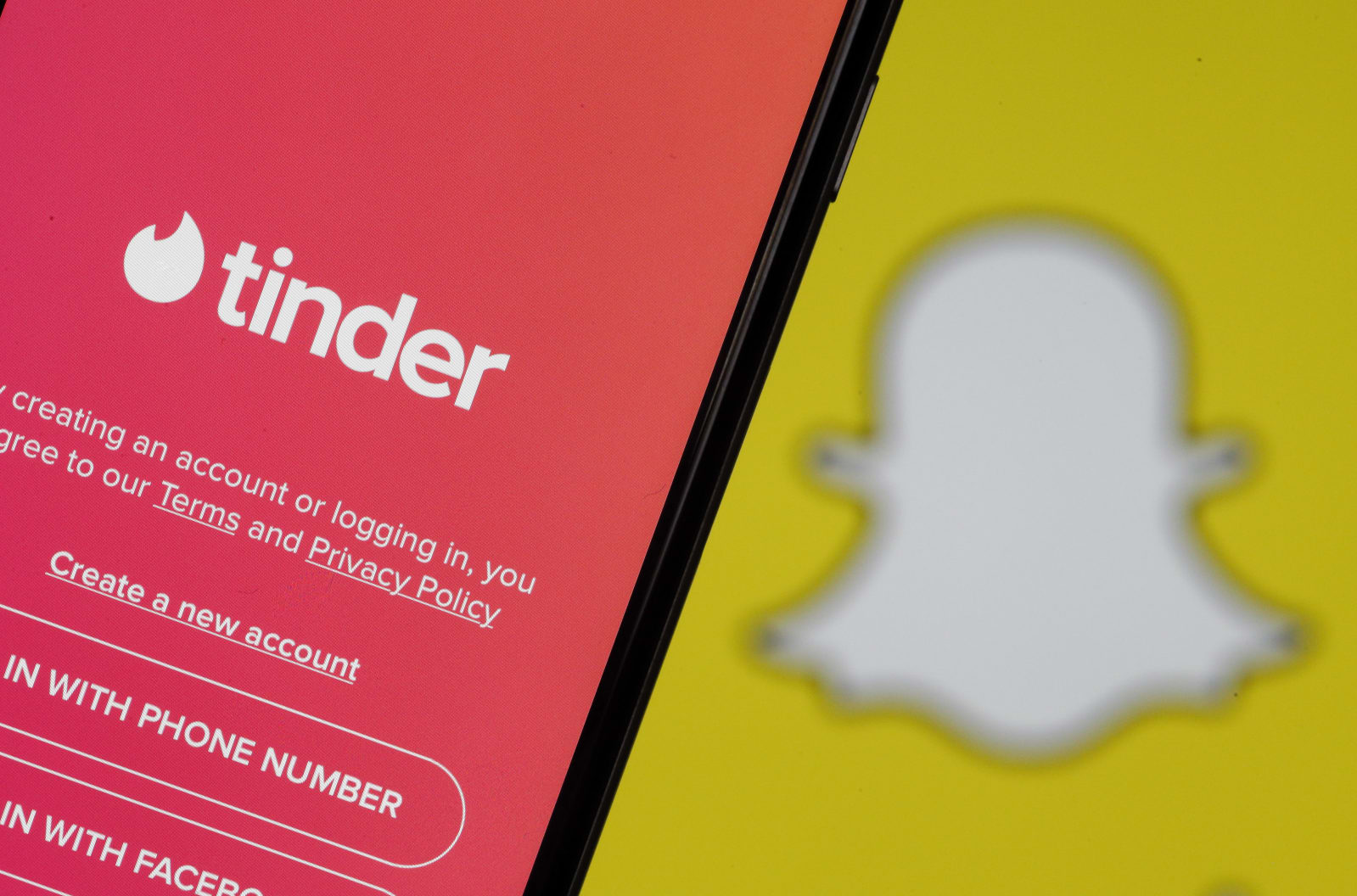 There's a lot of room to make up if Snapchat wants to catch Instagram, but Spiegel is adamant that what the company needs to do is focus on itself, not on what its competitors are doing. By introducing a gaming platform, bringing Stories to third-party apps like Tinder and expanding its short-form, vertical-video original series, Snapchat hopes it can lure new people to its app -- something it hasn't done a good job of for the better part of the past two years. And with newcomers like TikTok on the rise, it's only going to get more challenging for Snapchat to stay relevant.

This is why Snapchat has to open up its platform to others, even if that might come with challenges of its own, like navigating the minefield that is user data and building a safe platform around it.

Ben Schwerin, vice president of Partnerships at Snapchat, told Engadget he doesn't see all these changes the company is trying to make as an identity crisis or fighting for relevance. Rather, he views them as a "natural evolution" for Snap. "We think we can create this really immersive, engaging content experience for people who come to our service to talk to their friends, and then they can discover all this great content," he said. "That started with news and with media companies. It's evolved into these [original] shows, and the way we think of shows is sort of like reinventing TV for mobile."

Schwerin said allowing developers to tap into core features like Stories, which drive the more than 3 billion Snaps created every day, can create growth opportunities for Snapchat. With Tinder, the Snap camera doesn't live inside the dating app, so if you want to share a picture or video with an AR filter or lens, you need a Snapchat account. Meanwhile, Snap Games is launching with six titles, including an original from Snapchat (Bitmoji Party) and a Fortnite-inspired game from Zynga called Tiny Royale. At the Partner Summit, Snap also announced new deals with Netflix, GoFundMe, Fitbit, Giphy and Venmo as part of the company's effort to open its platform to third-party services, a move that began in 2018 with the launch of Snap Kit. 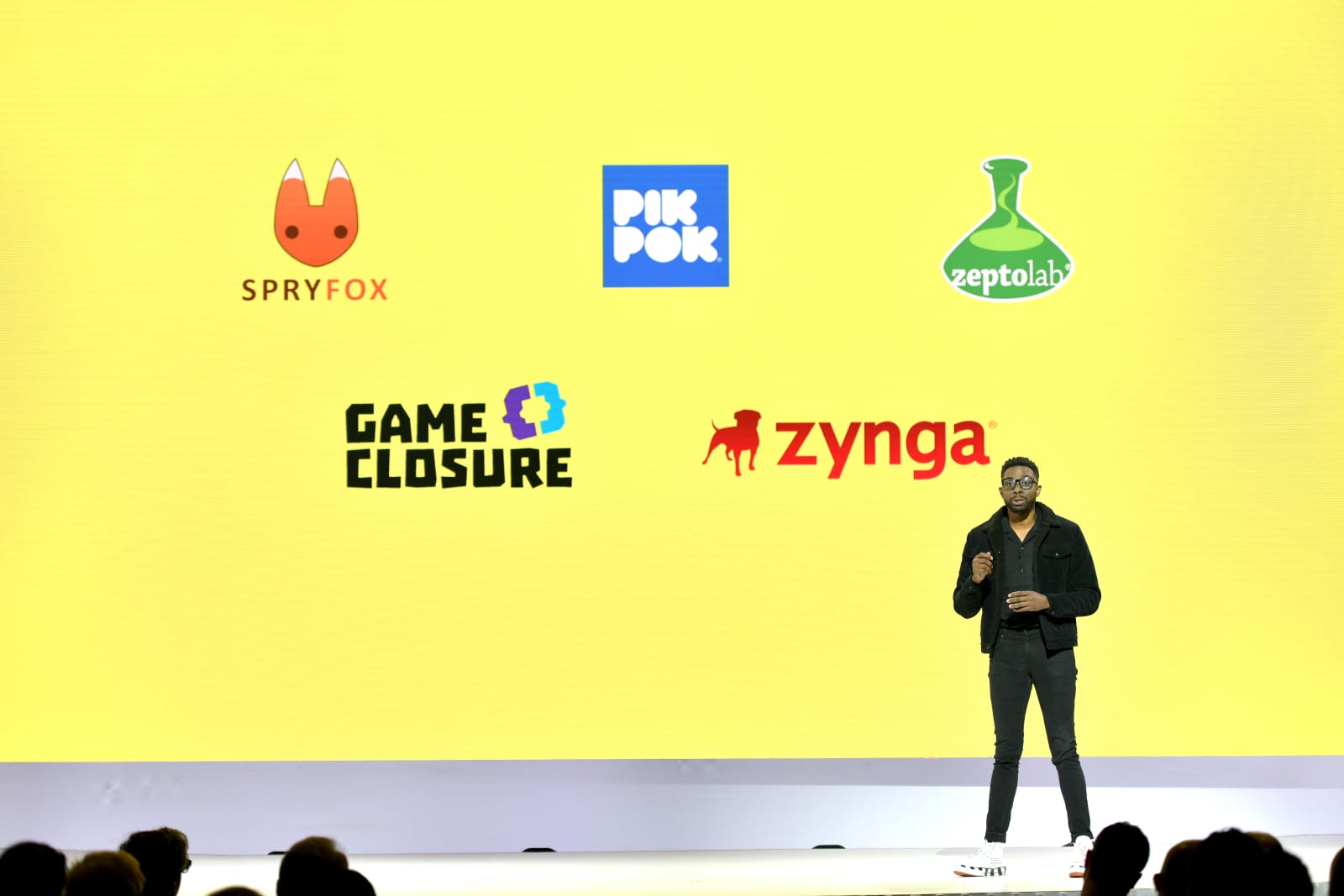 At the same time, though, Schwerin said these partnerships need to be curated; otherwise there's a risk of turning the Snapchat experience into a cluster for users. What Snapchat wants to do is cast a wide net with a carefully selected group of partners, which can help it differentiate itself from the rest of the pack. "One of the challenges with social media platforms or the internet is there's almost an endless amount of content, and discovery is hard," he said. "Sometimes it's really hard to find what you're looking for, and things can get lost. So that's not great for partners who want to invest, create something amazing and build an audience. It's also not great for users, because when you come in and you just see a sea of everything, it's hard to find what you're really interested in."

"One of the challenges with social media platforms or the internet is there's almost an endless amount of content, and discovery is hard."

Schwerin said the way to avoid those types of issues is to focus on quality over quantity. That's why, he said, Snapchat will be picky about who it gives access to features such as App Stories, as well as the developers who want to make titles for Snap Games. "For the foreseeable future, we're going to take a curated approach," he said, adding that Snap plans to "slowly expand that over time" so it can match the interest of its users. "You'll see us add more games over time. We'll make our own games. We'll work with our existing partners and others to make more games," he said. "We're going to learn quite a lot about what our users want and what's working for partners over the next few months."

Of course, as Snap looks to open up its platform, there will be concerns about how it plans to protect its users' privacy -- especially with all the data scandals surrounding competitors like Facebook. "Privacy and a privacy-centric approach has been central to all our product development from the beginning," said Schwerin. "And now we're in a place where ephemerality and privacy are very popular now. It's very popular. People like talking about it. We've talked about it from the beginning." Schwerin didn't mention anyone by name, but it's clear he was taking a jab at Facebook co-founder and CEO Mark Zuckerberg, who recently revealed a "privacy-focused" strategy for his company. 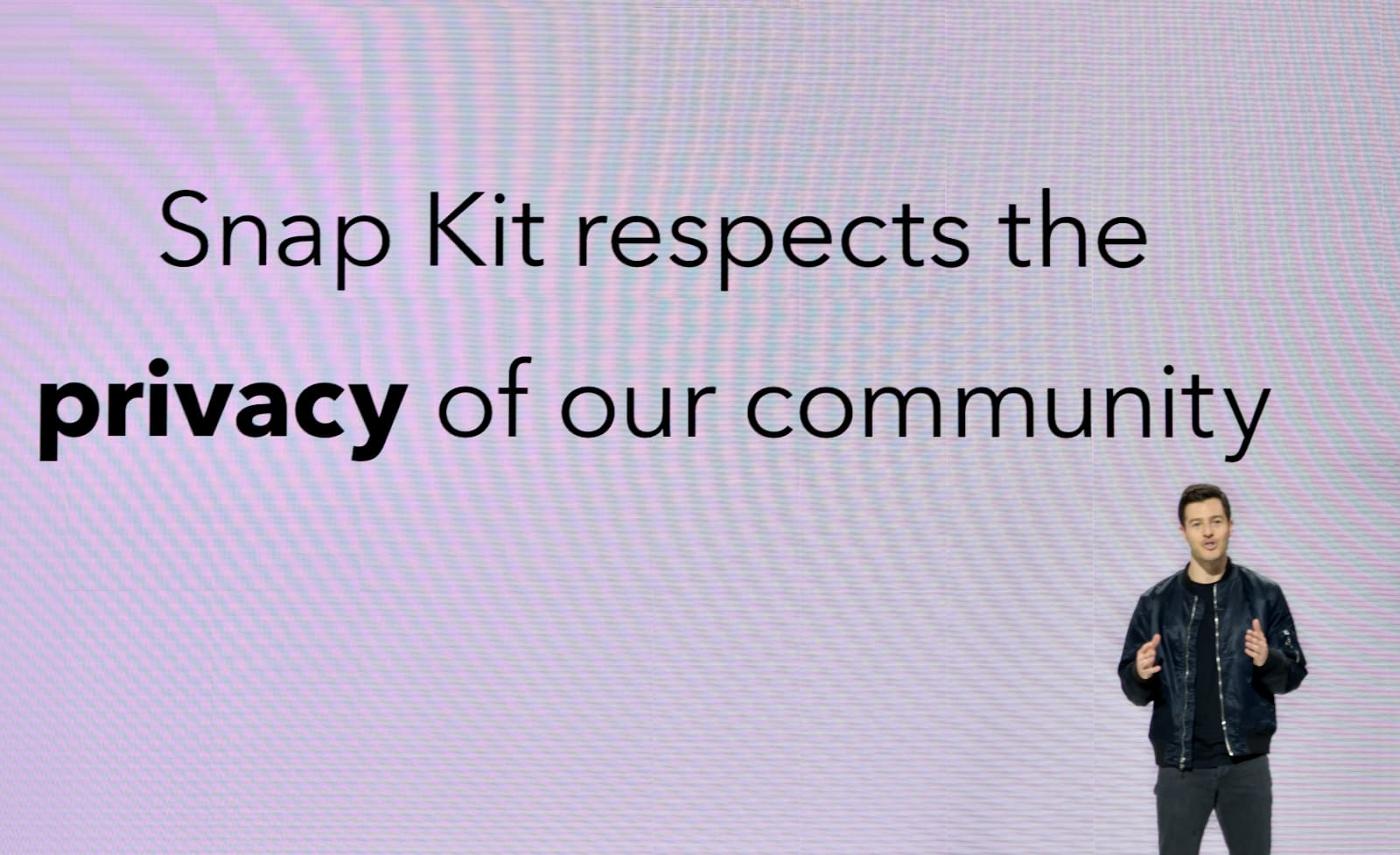 We don't believe we need to share our users' personal data to be successful. And so we're going to continue to do that.

Schwerin said that regardless of which app Snapchat users connect their account to, be it Tinder or Venmo, they're only sharing their username and, if they want, their Bitmoji avatar. "The value in that connection is in the creative functionality," he said. "So if you connect your app so that you can bring Bitmoji to Fitbit, or bring Bitmoji to Venmo, you're not sharing your friend graph. You're not sharing your demographic information." Schwerin said although this is necessary to create new features, "we don't believe we need to share our users' personal data to be successful. And so we're going to continue to do that."

Still, that's an area where Snapchat is going to have to be extremely careful. With governments across the world keeping a close eye on the data-privacy methods of tech companies, Snap will also have to be completely transparent about the personal information it shares with its partners. And that's going to be particularly important if, and when, it makes any changes to its policies along the way.

"We have the right formula, because we're approaching it the right way from the start," Schwerin said. "We're not building something, then we have to reverse engineer when we realize it's problematic. That's hard to do. Once you get to a certain scale, it's really hard to go back and fix everything. But we have the right building blocks in place now, so we can scale and scale in the right way." Again, Schwerin didn't have to say it, but it's safe to say he had Facebook in mind. Now he's going to have to make sure he and Snap stay true to their word.

All products recommended by Engadget are selected by our editorial team, independent of our parent company. Some of our stories include affiliate links. If you buy something through one of these links, we may earn an affiliate commission. All prices are correct at the time of publishing.
View All Comments
Snapchat can survive, but it can't do it alone