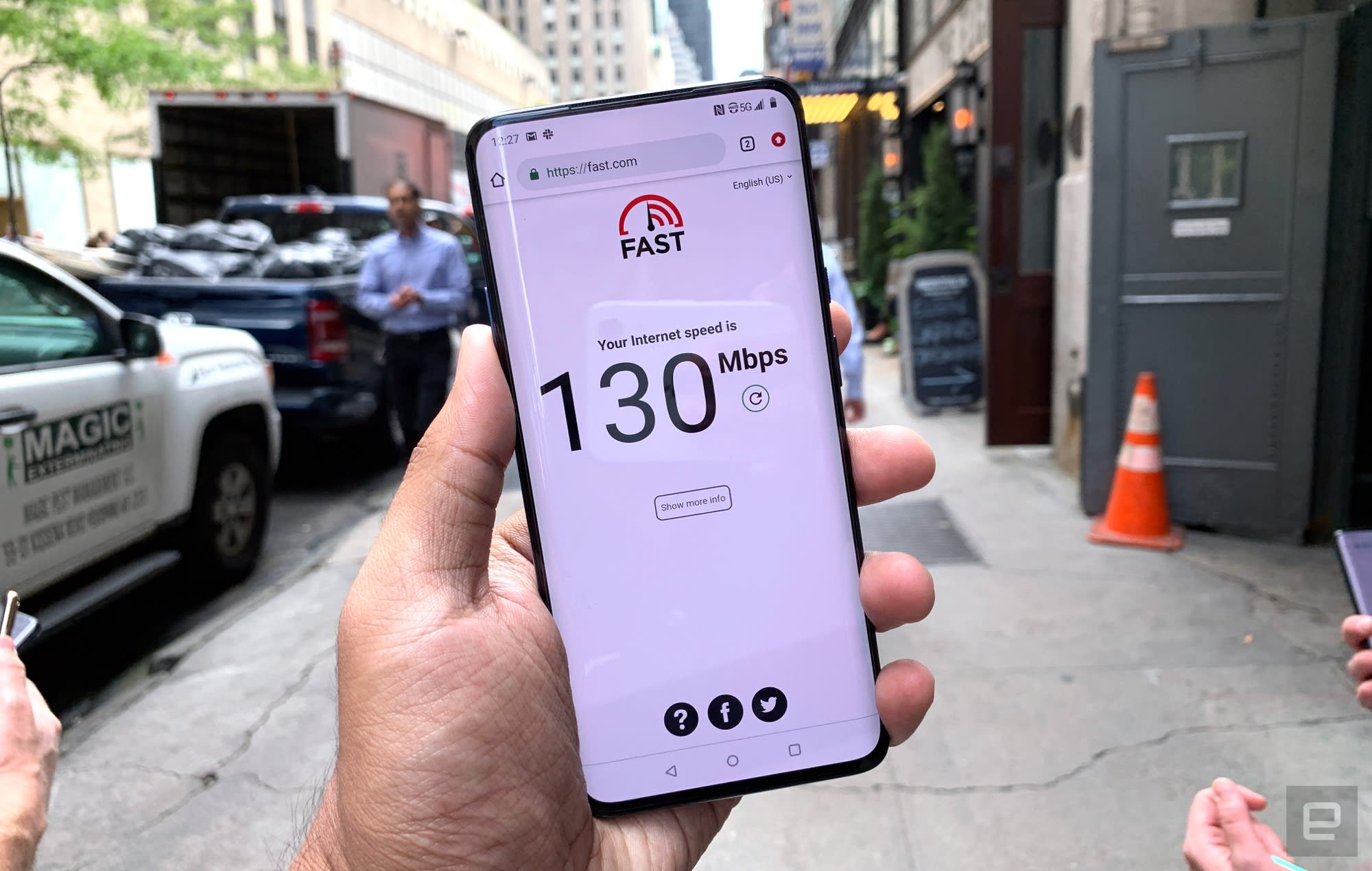 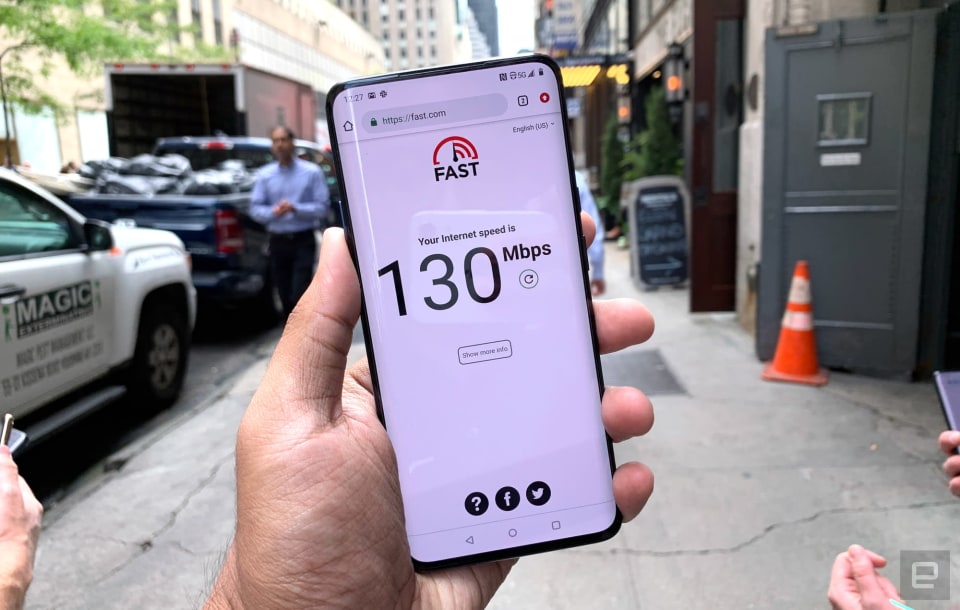 Sprint's 5G network has been live in Atlanta, Dallas, Houston, Chicago and Kansas City for a little a while, but its footprint just got a little bigger today. The carrier lit up four additional markets across the country today, giving us the perfect opportunity to see what Sprint 5G could offer in our own backyard — a.k.a Manhattan. Based on an afternoon's worth of testing with the sorta-new OnePlus 7 Pro 5G, it seems clear that while Sprint's 5G current 5G efforts might not be as viscerally impressive as other carriers', its customers could be in for a valuable treat.

The last time we had the chance to test a live 5G network, I spent a day running around Chicago in the pouring rain. The experience was still fruitful, though: When I did eventually stumble upon live 5G nodes, I saw my download speeds top out at around 630Mbps down. That's still well short of the roughly 1Gbps theoretical peak speeds Verizon had been talking up previously, but still not too shabby considering I was using the network within a day of it going live.

Sprint's approach, however, is a little different. Instead of dotting cities with mmWave nodes that provide super-fast speeds when you're within a very limited range, Sprint sought to flesh out wider areas with 5G coverage that, while not nearly as fast as Verizon's, feels a little more consistent. Over my afternoon of wandering and speed-testing, I occasionally saw speeds tick over 200Mbps — more often, my results landed in the 75-100Mbps range. There's a decent chance that, if you tried a similar speed test in your neck of the woods, you'd do better than that. The thing is, I'm smack in the middle of New York City, a slice of America that is perhaps uniquely known for its lousy cell reception. To contrast, my personal AT&T phone only occasionally tipped over 60Mbps down, while Sprint's 5G OnePlus 7 Pro frequently reported significantly better results.

With all that said, Sprint's 5G network can be a little all-over-the-place. While I was seated outside with full 5G bars, I couldn't ever be sure if my download speeds would exceed 200Mbps or totally tank on any given Speedtest attempt. I did, however, manage to download the entire first season of Netflix's 13 Reasons Why (comprised of 13, roughly 300MB episodes) in about 15 minutes.

To get a clearer sense of the differences between carriers, I holed up in the East Village, where Sprint's engineers had previously reported strong results. AT&T and Verizon generally landed in the 50-60Mbps down range, and T-Mobile — which will swallow Sprint whole before long — routinely posted download speeds just shy of 100Mbps. The OnePlus 7 Pro on Sprint, however, blew its competitors away with sustained speeds over 200Mbps down. Even better, those fast speeds sometimes seemed to hold steady when I sauntered indoors — occasionally I'd get results over 200Mbps, though they largely tended to hover in the mid-100s. Even so, that could be a key differentiator from mmWave-based networks like Verizon's and T-Mobile's — while testing Verizon 5G in Chicago, I often saw my test phone revert to LTE entirely if I wasn't sitting next to a window.

So far, Sprint's download speeds haven't thrilled, but they signified a real improvement over its standard LTE speeds. I wish I could say the same about the carrier's 5G upload speeds — even when I've gotten very solid downstream performance, I never saw Sprint's upload speeds tick over 20Mbps. Not great. At first, I had wondered whether Sprint was relying solely on LTE for its uploads, like Verizon does in its existing 5G markets. Turns out, Sprint does use "true" 5G for its uploads, but a spokesperson argued that "80 percent" of the carrier's network is on the downlink," and that it could add more uplink capacity if it needed to.

I also have to give Sprint some props for leaving the 5G indicator into the notification shade active even nothing seemed to be actively using a network connection. One of my biggest bones with the Verizon 5G network as I tested it in April was that, because it only lit up the 5G logo when an app or an Android component was using the network, it often looked like 5G coverage was much spottier than it was. Sprint might not be as fast, but at least you can see the 5G logo lit up on your phone and know that you'll probably get a better network experience than you would purely on LTE. It's still very early days for live, in-the-wild 5G, so setting people's expectations correctly is something carriers will really need to figure out. For now, at least, Sprint seems like it's on the right track.

Based on this very early experience in New York, it's easy to assume that Sprint's 5G implementation might be somewhat lacking. I think it's too early to make that call — while Sprint 5G has been live in New York City for a little while now, today is only officially day one, and there's plenty of time to work out the kinks. Sprint CEO Michel Combe also said during a reporter roundtable this morning that, rather than aggressively expand, Sprint would instead focus on strengthening its nine current 5G markets. For Sprint, the smallest (and in some cases, worst) of the four major wireless carriers, doubling down on 5G coverage in these markets is crucially important — they're also the cities where its LTE data usage is highest, so delivering better network performance to those people should go a long way in keeping them happy.

Thankfully, things only stand to get better from here. At this point, it seems almost like a given that Sprint and T-Mobile will finally merge, at which point Sprint's nascent 5G network will be augmented by T-Mobile's high-speed, mmWave deployment. Exactly how these networks will merge remains to be seen, but even at this point, it seems safe to say that Sprint's recent 5G launches are just the beginning of a bigger, far more interesting journey together with T-Mobile.

In this article: 5g, gear, mobile, oneplus 7 pro 5g, sprint
All products recommended by Engadget are selected by our editorial team, independent of our parent company. Some of our stories include affiliate links. If you buy something through one of these links, we may earn an affiliate commission.