The digital assistant is a welcome addition to this $200 fitness watch.

I really liked the Fitbit Versa when I reviewed it last year. For just $200, it offered a robust set of health-tracking tools in an attractive (if familiar) design, with a long-lasting battery to boot. So it's no surprise then, that the original Versa became Fitbit's best-selling smartwatch. When it came time for the company to unveil a successor, it didn't have much to improve. That didn't stop Fitbit from squeezing a few unexpected features (or expected, for those paying attention to the leaks), starting with adding an onboard microphone for Alexa support on the Versa 2. Oh, and the new watch still costs the same as its predecessor.

Fitbit is by no means the first company to try and squeeze Alexa into a smartwatch -- many have tried and failed to find success from the dubious distinction of simply putting Amazon's assistant on your wrist. But adding it to the Versa 2 adds a lot more functionality to a pretty basic OS that was good for wellness-tracking but not much else. You can ask Alexa on the Versa 2 to turn on your lights, tell you what the weather forecast is, find the nearest yoga classes and play music on your smart speaker. We watched Fitbit reps perform these tasks on their demo devices, and in general everything worked well and surprisingly quickly.

The Versa 2's microphone doesn't just facilitate voice control for Alexa, but it also enables Android users to dictate replies to text messages. Hurray, no more stiff, preset responses or trying to type out your thoughts on such a tiny screen.

That said, the Versa 2's display isn't so small anymore. At 1.4 inches, this year's model is a whole 0.05 inches bigger than its predecessor. That doesn't sound like much, but factor in the smaller bezels from last year's model, and the Versa 2's face feels noticeably roomier than the older watch. Fitbit also upgraded the screen from an LCD to an AMOLED, which offers deeper blacks and brighter colors, making it theoretically easier to read outside -- not that I could test that at my briefing.

Fitbit also removed its logo from the bottom of the watch face, making the device's front look cleaner. The company further tidied up the Versa 2's design, getting rid of two physical buttons and leaving just one behind on the left edge. It also unified the charging and sensor hubs on the case's underside, and made this single plate a little softer so it's more comfortable to wear through the day. 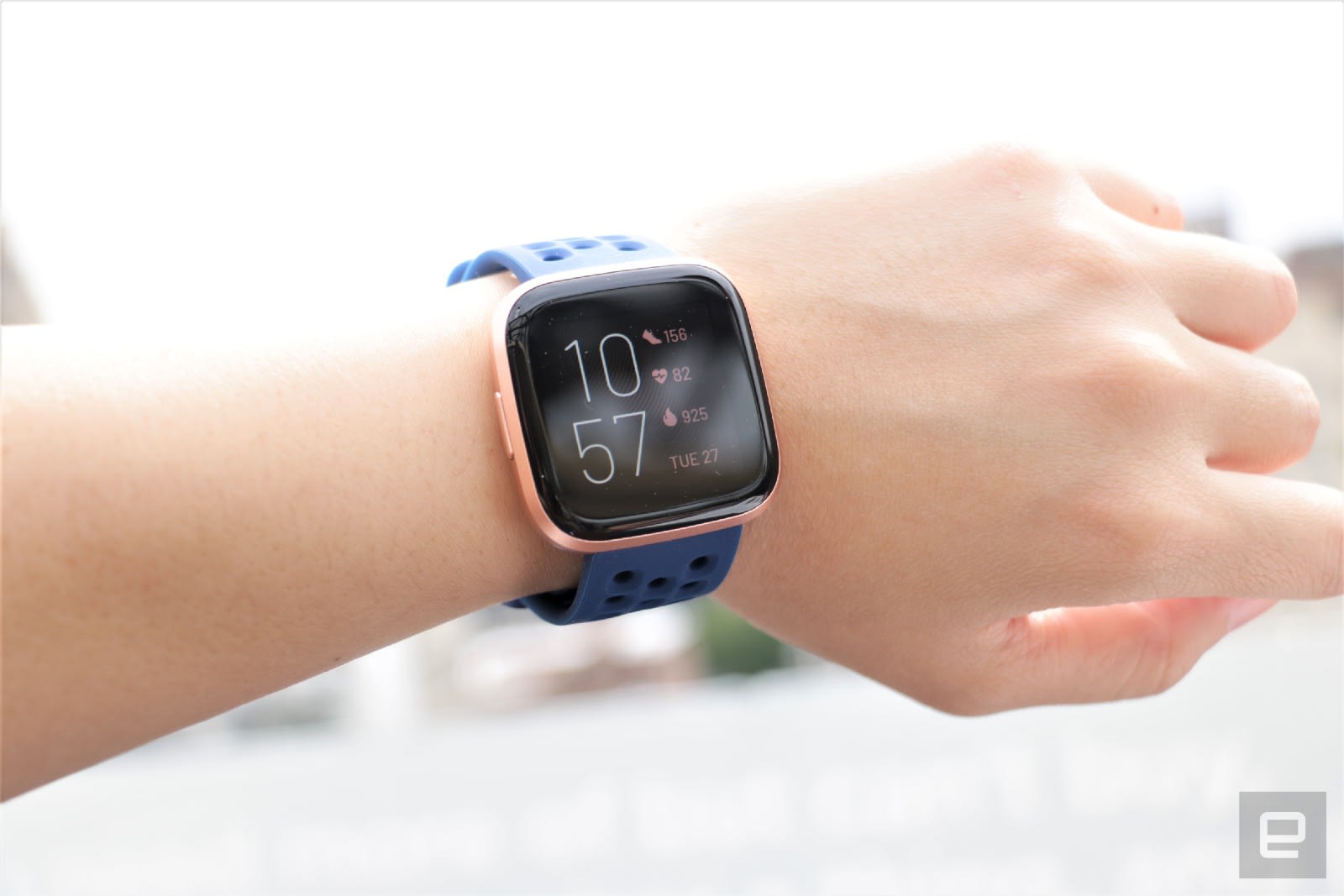 Speaking of all-day use, the Versa 2 is finally getting an always-on display so you can tell the time even if the watch is asleep. This is a dimmed black-and-white interface that shows basic information like the time and your steps progress.

Fitbit also tweaked the home screen and dashboard, and its changes make the layout more finger-friendly. The new watch face, for example, features bigger font and more neatly organized stat readouts. In the new control panel, you'll find larger icons for quick settings like Fitbit Pay, Sleep Mode (a sort of Do Not Disturb) and brightness.

Other new tools include Spotify integration that let you control your music playback over Bluetooth. If you've used Spotify Connect before, you'll know the drill here -- you can use the Versa 2 to control playback on pretty much any speaker, phone or headphones that have the app. 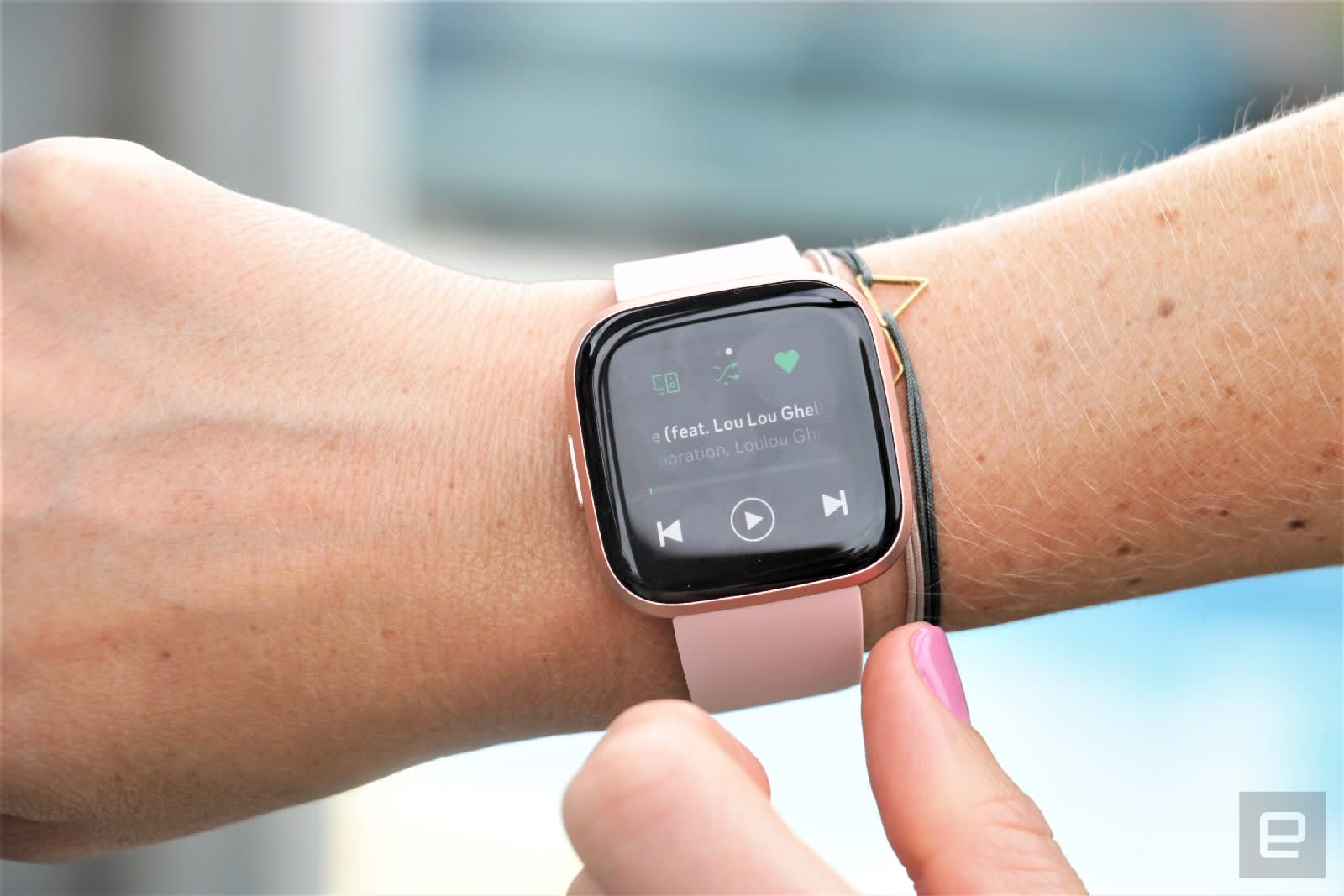 Fitbit is also adding new sleep insights to help you better understand your Z's. It's launching a new "sleep score" in its app, and any Fitbit with a heart rate monitor can use this. Your nightly score is a number out of 100. Half of that score is determined by the overall amount of time you slept, a quarter is from how long you spent in the deep and REM stages of sleep, while the remaining quarter is based on how much "restorative rest" you got. That last bit is when your heart rate drops to as low as your resting pulse, which is when your body produces growth hormones.

Other new sleep-related tools include estimated blood oxygen variation (to determine breathing irregularities) and an upcoming "Smart Wake" function. When enabled, this will look at the sleep stage you're in during a window of time you want to get up, and wake you when it thinks you're in light or REM sleep. This way, you won't be dragged awake from deep sleep, which can feel disruptive and jarring. 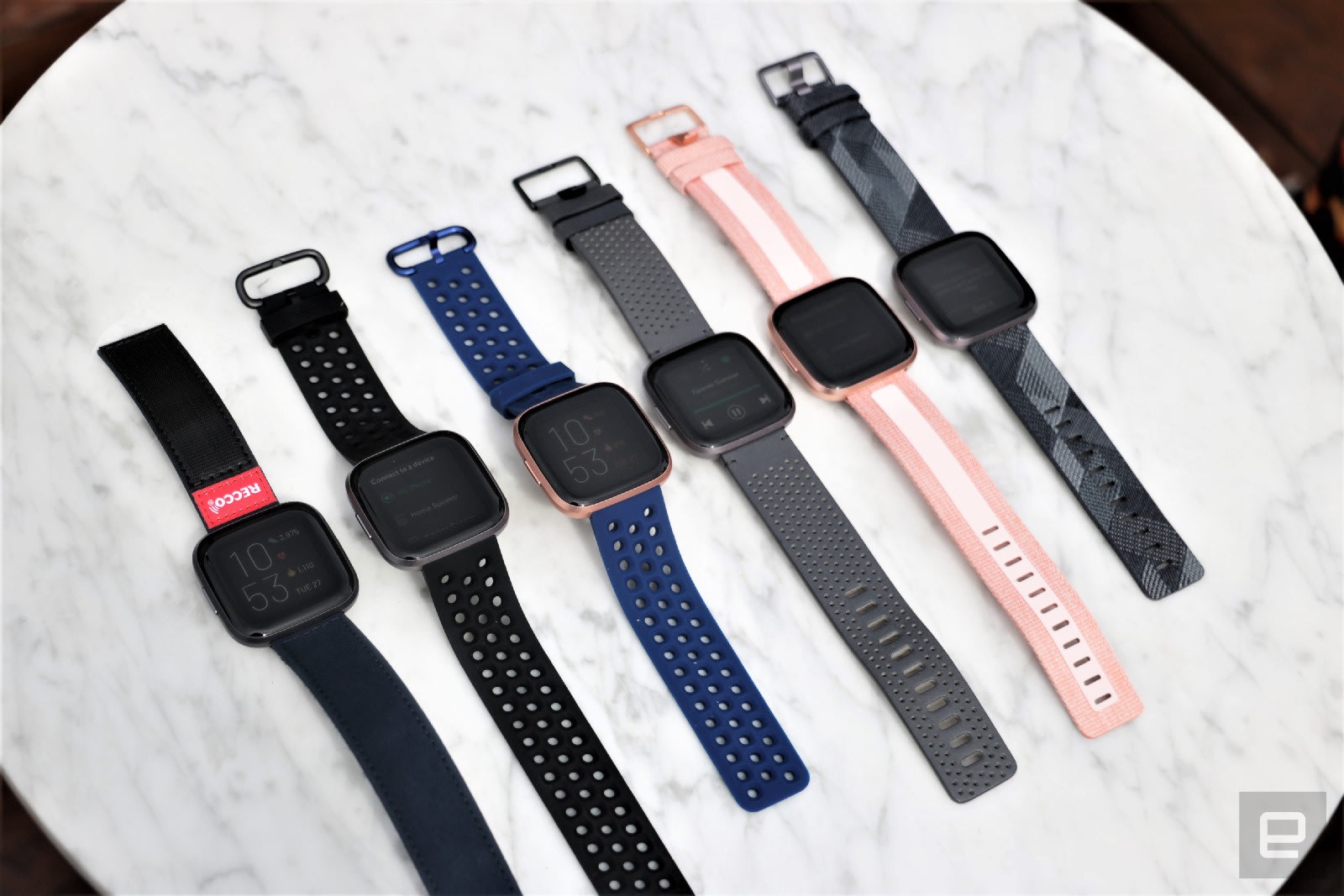 Powering all these changes is a new processor that Fitbit says is more responsive than before. You'll also find the same connected GPS feature and water-resistance that lets you take the Versa 2 with you into the pool. Battery life got a slight boost -- Fitbit is now promising "five-plus" days of juice over the original's "four-plus days." The increased runtime estimate is impressive given the new screen size and technology. With the always-on display enabled, Fitbit gives a safer guess of "multiple days." All of this is deliberately vague wording, and I'll only get a real sense of how long the Versa 2 will last after I review it.

Meanwhile, you can order the Versa 2 on September 15th, so you can still wait for our deeper impressions before making the decision to buy one. Like I mentioned, the base model will cost $200, while a Special Edition bundle will cost $230. Both versions will have Fitbit Pay, which is nice since only the Special Edition had the mobile payment feature last year. This time, though, shelling out for the more expensive package gets you two watch bands and a 90-day trial for the new Fitbit Premium service. 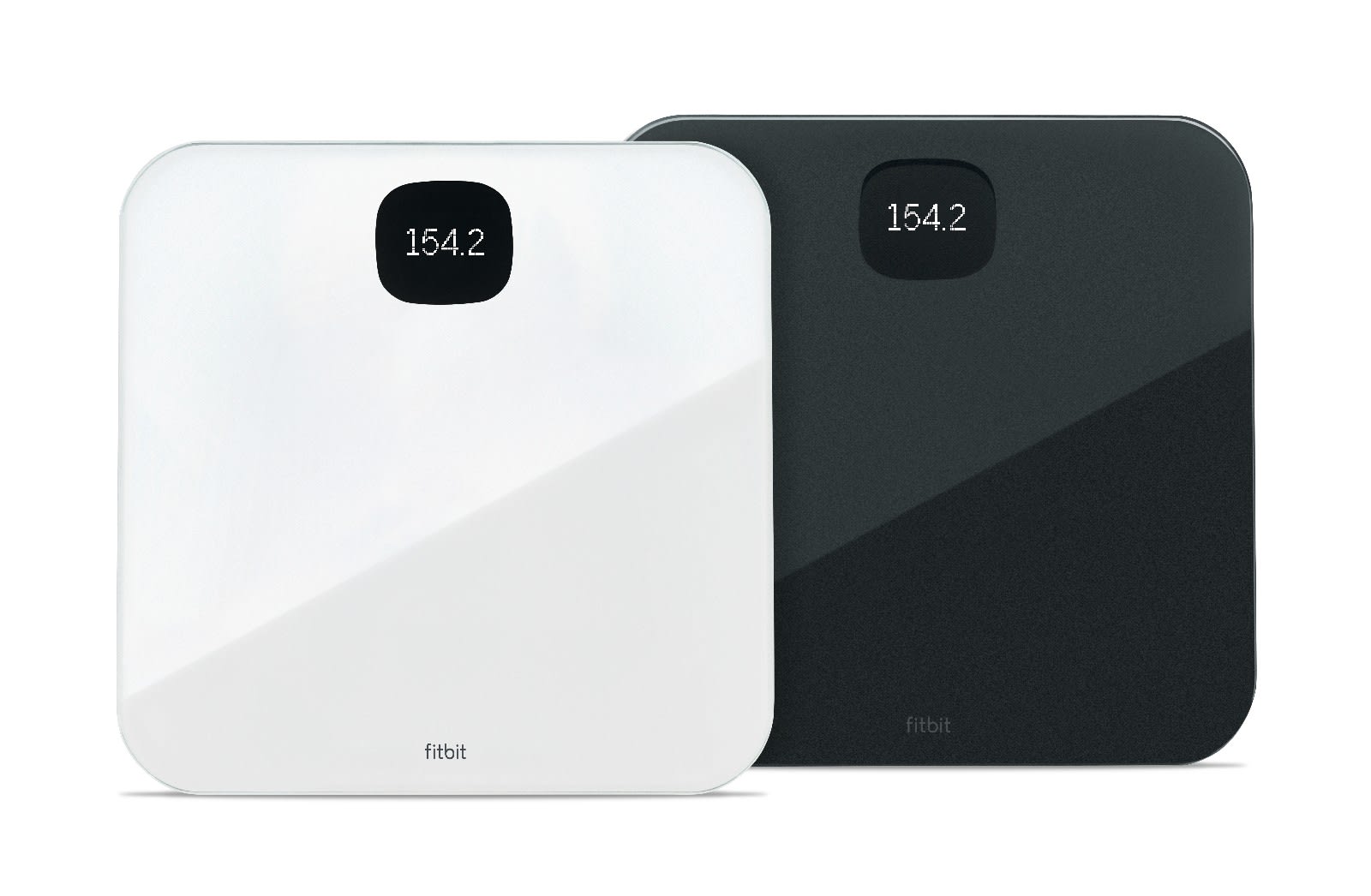 Fitbit also announced a cheaper version of its popular smart weighing scale. The Aria Air will be available for pre-sale in September, at a starting price of $49.95, making it the company's first connected smart scale that costs less than $50.

The Versa 2 is a compelling upgrade over the original, since the Alexa integration makes it much more useful. But if you're looking for a more affordable yet well-rounded fitness watch, it looks like Fitbit has dropped the price of last year's model to $170, making it a pretty good deal. And even though the new smartwatch also seems like a valuable purchase, those itching to get the Versa 2 should wait till we publish our full review before spending any money.

All products recommended by Engadget are selected by our editorial team, independent of our parent company. Some of our stories include affiliate links. If you buy something through one of these links, we may earn an affiliate commission. All prices are correct at the time of publishing.
View All Comments
Fitbit Versa 2 hands-on: Alexa makes a good smartwatch better