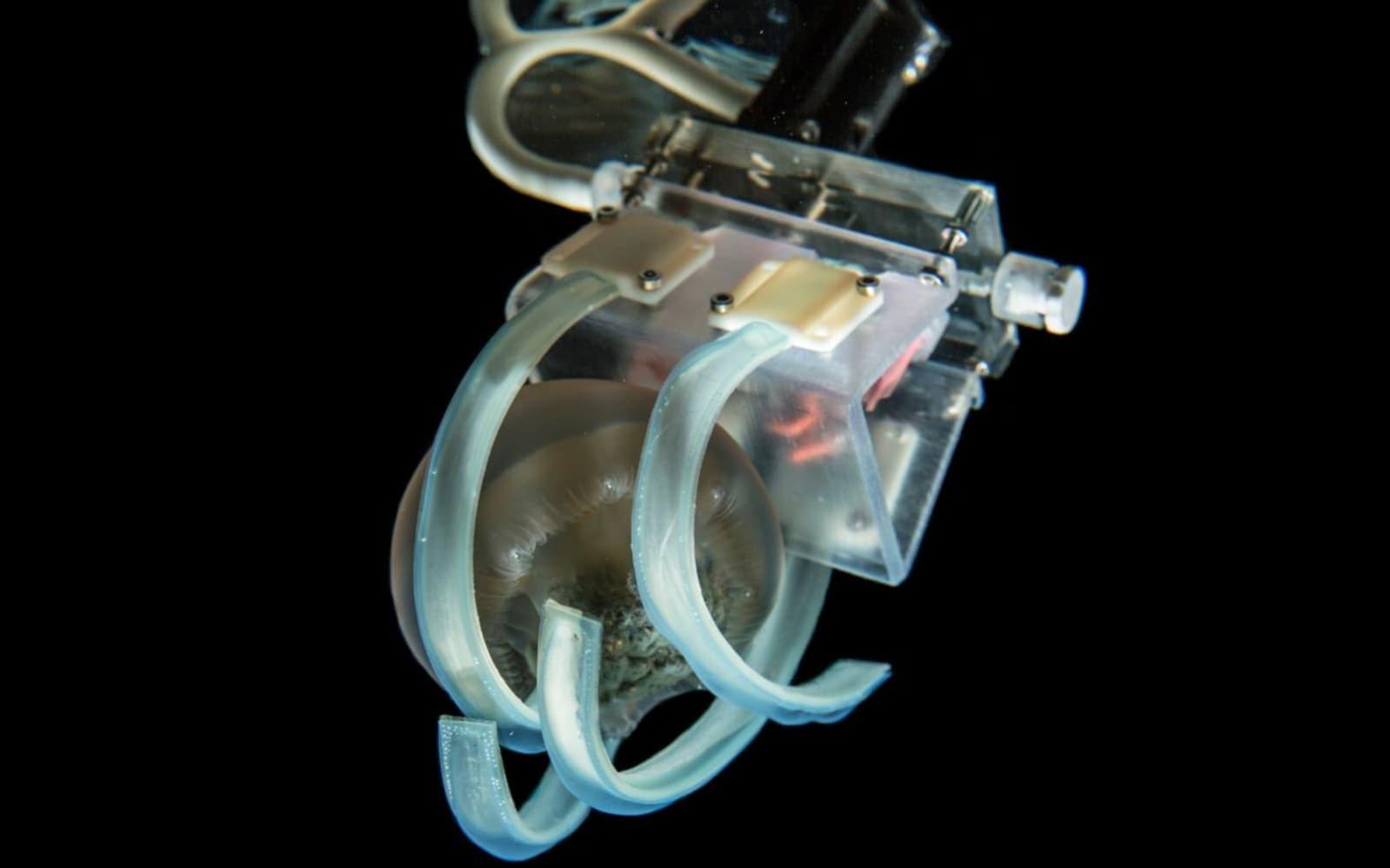 Robots can be a bit heavy-handed. Their forceful grip might not be a problem when they're moving boxes in a warehouse, but they can damage fragile marine creatures like jellyfish. Researchers may have a solution. They've created a robotic hand with a squishy grabber and a gentle grip that uses "fettuccini-like silicone fingers" to catch and release fragile, gelatinous jellyfish.

Jellyfish are about 95 percent water, and the remaining five percent of their body is incredibly delicate. At the moment, most of the tools used to capture jellyfish in their natural habitat were developed for the marine oil and gas industries, and they often shred jellyfish to pieces when they attempt to capture them. In contrast, these noodly silicone "fingers" are inflated with water and use hydraulic pressure, which helps make them extra gentle. According to the researchers, they exert less than one-tenth of the pressure that a human eyelid exerts on the eye.

The device was developed at the Wyss Institute at Harvard University and Baruch College at CUNY. The researchers shared their findings in Science Robotics today. They note that jellyfish have already led to important discoveries, like the green fluorescent protein (GFP) used by scientists to study gene expression. And some believe they could teach us how to combat aging.

The jellyfish may not love being ensnared by noodly fingers, but they're not harmed in the process. The researchers tested the grippers at the New England Aquarium, where they grabbed swimming moon jellies, jelly blubbers and spotted jellies -- all about the size of a golf ball. Supposedly, the jellyfish showed no signs of stress, and the grippers were able to open and close about 100 times before they showed signs of wear. That's pretty good for something compared to strips of pasta.

This technology could also help researchers collect and study other marine life, and it could advance other soft robots. Already, we've seen those designed for space exploration and healthcare, triggered by methods like heat and air-pressure. "Soft robotics is an ideal solution to long-standing problems like this one across a wide variety of fields, because it combines the programmability and robustness of traditional robots with unprecedented gentleness thanks to the flexible materials used," said Rob Wood, PhD, co-lead of the Wyss Institute's Bioinspired Soft Robotics Platform.

In this article: baruch college, cuny, damage, gear, gelatinous, harvard university, jellyfish, marine, noodly, research, researchers, robotics, robots, silicone, soft robot, wyss institute
All products recommended by Engadget are selected by our editorial team, independent of our parent company. Some of our stories include affiliate links. If you buy something through one of these links, we may earn an affiliate commission.