1989 was a year of revolutions. The Berlin wall fell, protesters rallied in Tiananmen Square and Neneh Cherry was taking a Buffalo Stance. This was also the year that portable gaming had its own revolution. The Game Boy launched in the spring, and, 30 years ago this weekend, we were introduced to the world's first true color hand-held console -- the Atari Lynx.

Not only did the Lynx have a backlit color display, it came with 16-bit graphics and scaling and rotation, a feature usually reserved for arcade boards of the time. That might not sound that crazy today, but this was over a year before the Super Nintendo would launch, with its conceptually similar "Mode 7" feature. Bear in mind that the SNES was Nintendo's flagship home console, and you get an idea of how powerful the Lynx was for its time.

When the Lynx came out, the gaming landscape was very different to how it is now. Heck, if you'd told people then that Sony and Microsoft would become the dominant gaming brands, we'd have laughed and nearly spilled our Jolt Cola. In a sense, the gaming crown felt like it was still up for grabs, despite Nintendo and Sega's dominance at the time.

Atari was taking a chance with the Lynx. It was in limbo between its 8-bit NES rival, the 7800, and the "64-bit" (but also ill-fated) Jaguar. The company hoped that people wanted arcade-style classics like Ms. Pacman and Battlezone 2000 on the go and that the quirky ambidextrous design (you could "flip" the screen and have the d-pad on the right) would win over the oft-forgotten left-handed gamers. Nintendo meanwhile went for pocket-size platformers and puzzle games. History tells us that Nintendo got it right. Left-handers be damned.

Confusingly, Atari would release a second hand-held called the ... Atari Lynx II, but it wasn't a sequel; it was more of a redesign (much like Nintendo's Game Boy Pocket was). The original Lynx was comically wide, making it kinda cumbersome even for 1989. The Lynx II was also pretty chunky, but at least a little bit more handleable.

That wasn't the only thing Atari changed during the Lynx's fairly short lifespan. At launch, games came on flat cartridges (you might say "cards," even). They seemed magical at the time, making you wonder where was the actual game part was. But the combination of the original Lynx's weird "trapdoor" game slot and, I can only presume, weak juvenile hands meant removing the cartridges could be tricky. To fix it, Atari revised the design ... twice, finally landing on a "curved lip" format. This would ultimately have the unintentional effect of making those older cartridges more collectible. If you happen to have a "ridged" copy of Gauntlet hanging around, hit me up. 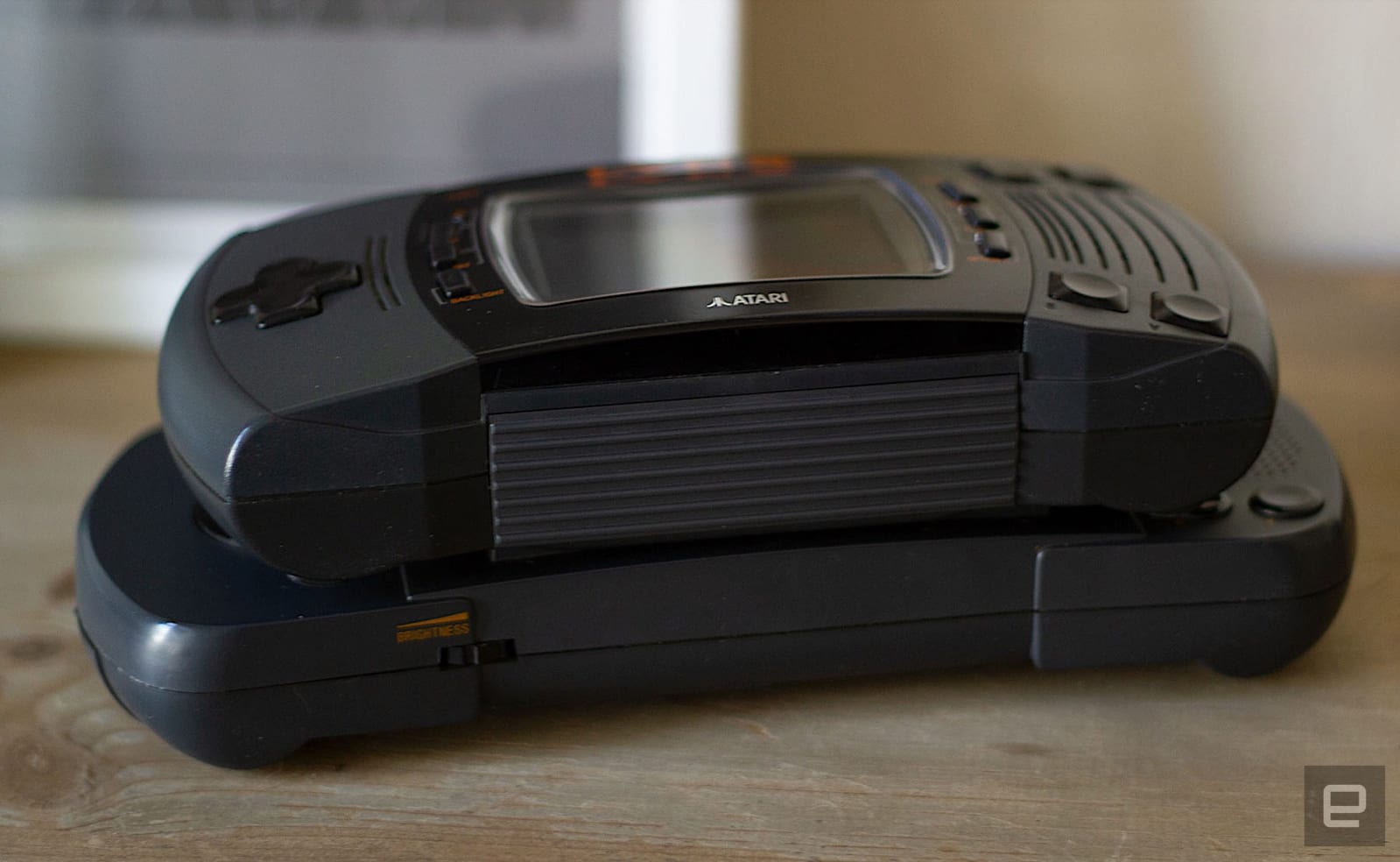 While the Game Boy had hundreds of licensed add-ons, the Lynx just had a couple of accessories. There were official carry cases, including one snazzy option with a belt clip or over-the-shoulder strap. Just be grateful, youth of today, that your Switch doesn't require the use of woven nylon and upper-back muscles to carry it around. The Lynx needs six AA batteries, but you could extend its meager lifespan with a few different battery packs, including one that was basically a case for "D" cell batteries. If you don't know what a "D" cell battery is, imagine four AAs glued together -- and the battery pack took six of the buggers.

And about that display. Sure, it was color and backlit (with a whopping 160 × 102 resolution), but as already mentioned, it tore through batteries. For Lynx owners, AAs became more sought after than cigarettes in prison. Sure, you could plug it into the wall, but where's the fun in that?

If you still have a Lynx in a drawer somewhere, there's a good chance that, if it still works, the screen looks terrible. Certainly worse than you remember it. We're spoiled by today's display technology, and the Lynx is a good reminder of just how far we've come. Fortunately, there are modern aftermarket displays you can buy to bring your Lynx a little more up to date. For those interested, Google "McWill" or "BenVenn" mods to find what you're looking for. (The Lynx featured up top has the McWilll mod.)

Screen mods are nothing new for retro hand-helds, but the Lynx's current fanbase is painfully small, so the fact that there are options at all is quite a blessing. Likewise, you can find SD-card "multicarts" like RetroHQ's for about $85, but they're made to order (and there's a waiting list).

But what about the games? Well, there's no Mario or Sonic here. In fact, there aren't many platformers (the prevailing format for consoles of the era) at all. The nearest thing the Lynx had to a "mascot" was probably Scrapyard Dog, which is surprisingly fun with plenty of hidden secrets to discover, but not the iconic IP the platform needed.

Where the Lynx did shine was arcade conversions. Whether it's classic fighters like Double Dragon, racing games like S.T.U.N Runner or classics like Rampage, if you like button-mashing games, the Lynx had you covered. There were also good ports of titles like Shadow of the Beast and some original IP like Blue Lightning (an Afterburner clone). Sadly, the Lynx was lacking in any decent RPG games, although, weirdly, Bill and Ted's Excellent Adventure shares a lot of DNA with the genre.

Ultimately -- in my opinion, at least -- the limited library of games would see the Lynx fade fairly quickly from the emerging hand-held battlefield. Which is a shame, as Atari seemed to have some exciting plans for it -- including a rumored scenario where the Lynx would connect to the Jaguar and operate as a controller or second display, years before Nintendo's Wii U would do something similar. That never happened, but as the console turns 30, it still has a core of dedicated fans -- enough to see a new game pop up every now and again.

After Atari gave up on the Lynx around the mid-'90s, a few unfinished titles were released. Some of them clearly slapped together last minute, (like Krazy Ace Miniature Golf), a few were shared as playable ROMs (like the incomplete Daemon's Gate) and a few remain lost to the sands of time -- like the unfinished port of Vindicators. 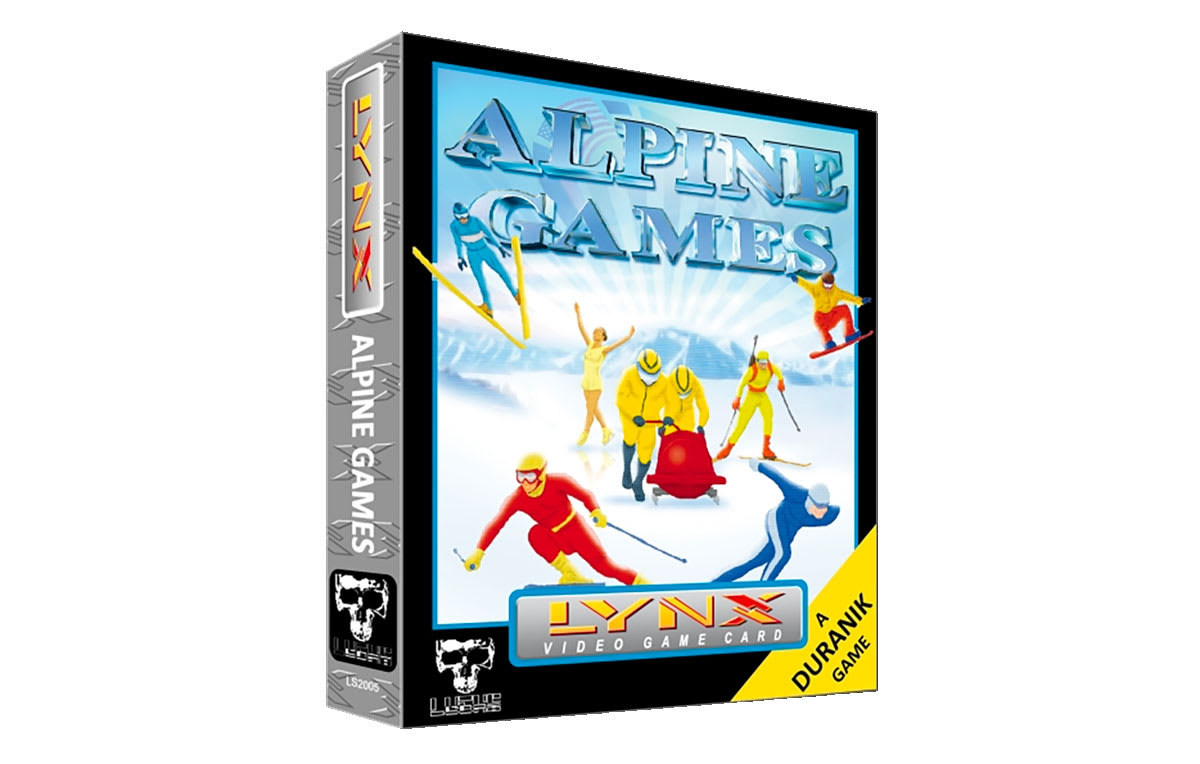 There have been some all-new titles, though. Notably, 2004's Alpine Games and 2009's side-scrolling shooter Zaku. But as you can already tell, the wait for new things to play has been somewhat glacial. Until, more recently.

In the last few years, new interest has seen a (relatively) steady increase in new things to play. In large part thanks to "Luchsoft," basically a dedicated fan and programmer who created a label of sorts for releasing games. Luchsoft titles come on physical cartridges (a big deal for purists), complete with original style boxes, posters and even enamel pins (many original games also came with pins). My personal favorite is Wyvern Tales, an actual honest-to-goodness JRPG with saves (a novelty in Lynx-land) and hours of gameplay. 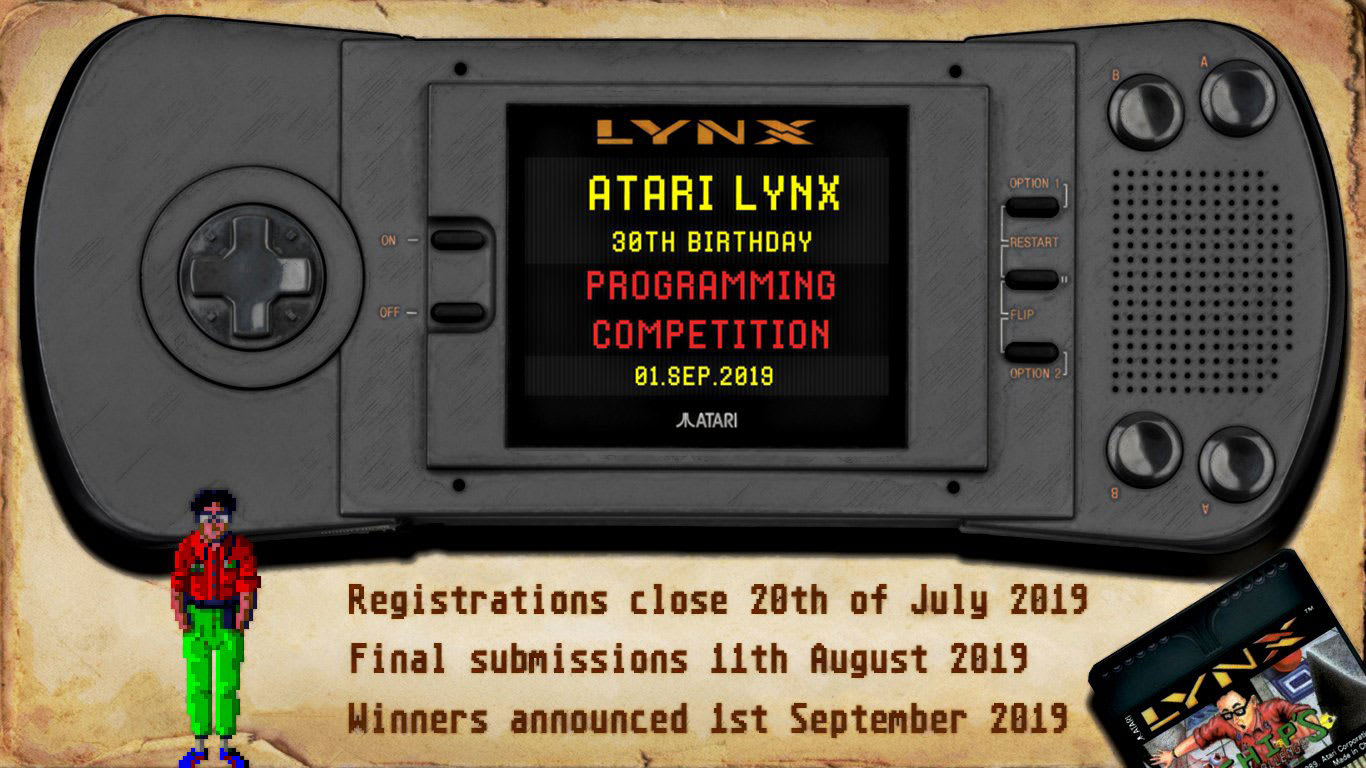 This weekend, to celebrate the 30th anniversary, the Lynx faithful could be treated to as many as 10 new homebrew games thanks to a developer competition organized by AtariGamer.com. Some of the entries look as fun and as deep as anything that was released in its heyday. Thanks to the hard work of dedicated fans (who tend to hang out at AtariAge) the new titles will be revealed Sunday, September 1st (the Lynx's actual birthday), and made available free.

If you're feeling nostalgic, a secondhand Lynx will run you about $50 on eBay. If you're daring, you can seek out a model listed as "nonworking." The Lynx won't turn on without a game in it, and many people clearing out their lofts don't know this, so when they put batteries in it and nothing happens they assume it's dead and sell it cheap. I've picked up a few working units this way (and a few duds, to be fair). If you're feeling a little thrifter, there are plenty of online emulators that'll play the new games just fine.

Whichever game wins the competition, it's a testament to the handful of dedicated fans that are keeping the Lynx alive.