This is one of the best 15-inch notebooks around but its design feels outdated.

Dell's XPS series has been an industry favorite for years. We particularly love the 13-inch -- Devindra Hardawar, the only person at Engadget who's a bigger PC nerd than me, even called the XPS 13 the "perfect ultraportable". The XPS 15 is similarly well-rounded, offering powerful performance, a vibrant display and long-lasting battery. I wouldn't call it perfect -- it's a bit chunky, but I have few complaints about this year's XPS 15. Dell has addressed many of our issues with previous models and delivered what may be one of the best 15-inch notebooks around.

The company claims this is one of the smallest and lightest 15-inch laptops around, and that might be true, but I still found it quite large. To be fair, I mostly test 13- and 14-inch systems, so any 15-inch machine is going to feel big to me. But compared to laptops like the LG Gram 15, the ASUS ZenBook Pro 15 and Acer's ConceptD 5, as well as upcoming gaming notebooks using NVIDIA's Max-Q designs, the XPS 15 feels clunky. And at 4.4 pounds, our review unit is much heavier than the 2.2-pound Gram 15 and the 3.3-pound ConceptD 5. Dell will need to step it up design-wise if it wants to remain the leader.

To stay ahead, the company needs to listen to feedback and it seems to be taking at least some heed, based on one key update. The best improvement to this year's model is webcam placement. The sensor now sits in its rightful place above the screen, as opposed to below the display. Praise the PC lords! Now I can take video conference calls on an XPS 15 without forcing my coworkers to stare directly up my nose. To make this happen, Dell had to miniaturize its camera to fit into the skinny bezel, but it also had to sacrifice Windows Hello compatibility. This means if you want to unlock your laptop just by glancing at it, well, you can't. At least you can still easily log in with the fingerprint sensor embedded in the power button.

Another nice upgrade from the older XPS 15 is the keyboard, which now has noticeably deeper travel and softer feedback. It's not as cushy as Lenovo's Thinkpads, but it certainly feels more comfortable than a MacBook Pro, and offers more depth than the Surface Laptop 2. The trackpad, on the other hand, is unchanged. It's the same size as before and just as responsive. It's a totally serviceable trackpad, though I would have appreciated a little more room for performing gestures.

Our XPS 15 review unit has a 4K OLED display, which is just gorgeous. These extra bright, colorful panels are cropping up all over laptop town and I fully support the trend. HP's Spectre x360 15 has one, Lenovo's ThinkPad X1 Extreme's got one, and gaming notebooks from Razer and Dell's own Alienware also have them. They're great. Not only is it lovely to edit photos and watch videos on the XPS 15's display, the brighter panel also makes it easier to see detail in scenes that take place in the dark. Bonus, the speakers on this machine are loud and crisp, so you can truly enjoy, say, Lea Michele's sparkling vocals when you're binge-watching Glee. For the more hardworking among us, the XPS 15's OLED is also a better canvas than an LCD for editing videos or photos of dimly lit scenes. 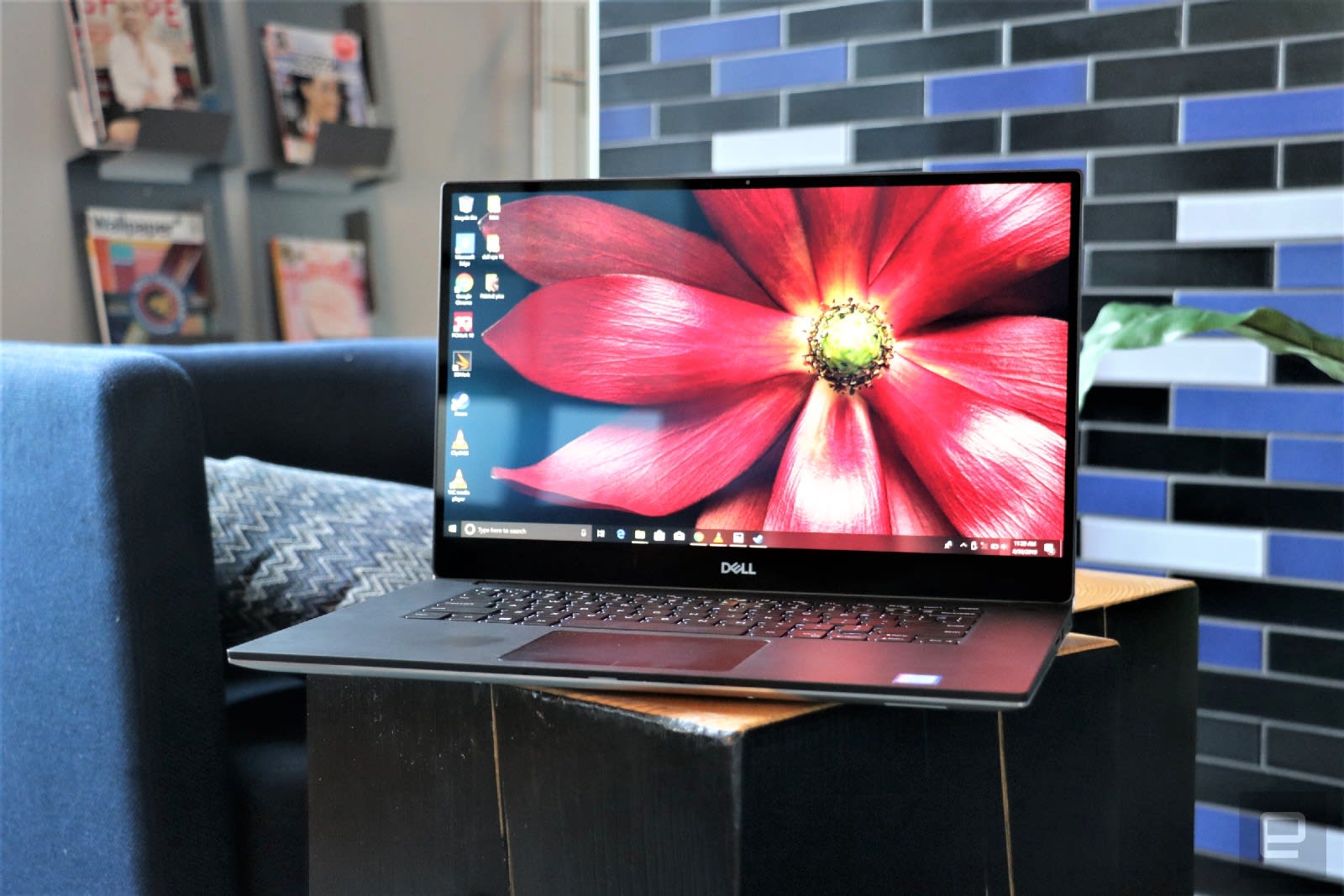 The downside to these 4K screens is that they generally suck power, so battery life tends to be a big concern. Dell says the XPS 15's 97 watt-hour pack should last up to 20 and a half hours, which would be impressive if true. On our battery test, the runtime was more like 13 and a half hours, That's pretty respectable, though. It's more than enough for a full workday and longer than the Alienware 15 and the ASUS ZenBook Pro (although that has a battery-draining touchscreen trackpad). Plus, you could probably hit Dell's estimate if you dimmed the screen and turned on the most energy-saving mode. Oh, or if you opted for a lower-res, less power-hungry panel and CPU.

Our review unit came packing a ninth-generation eight-core Intel Core i9 CPU and an NVIDIA GeForce GTX 1660 graphics card. Add to that 32GB of RAM and a 1TB SSD and we've got a super powerful machine on our hands. That explains why during my testing, the XPS 15 blazed through tasks like editing photos and video conferencing. It also ran smoothly while I switched between a dozen open Chrome tabs and a session of Overcooked.

But the configuration we were sent also costs a whopping $2,649, which is about $400 more than a similarly specced ZenBook Pro 15. Though the ASUS machine comes with a less-powerful GTX 1050 GPU instead, and offers a useful touchscreen trackpad. Our XPS is $100 cheaper than the highest-end MacBook Pro 15, which has a similar CPU, Radeon Pro graphics, 16GB of RAM, 512GB of storage and the Touch Bar. The HP Spectre x360 15 is also more expensive, despite packing an older CPU and less-powerful graphics card.

If you don't expect to be killing it at Overwatch while concurrently streaming to Twitch, you probably won't need such a powerful setup. The $1,099 base model with a ninth-generation Core i5, 8GB of RAM and 256GB of storage should be enough for your daily workflow and some light photo and video editing.

The XPS 15 lives up to its family's reputation for being well-rounded, powerful machines. It delivers much-appreciated tweaks to an already-successful formula, but could use a bit of a refresh on its style. For the money, though, the XPS 15 is still one of the best laptops you can get.