The ThinkPad X1 Carbon is one of the most established laptops around, and this year's model marks the 7th iteration of the series. Just like every one before it, this X1 Carbon is thinner and lighter than ever. What else is new? Well, there's a brighter UHD display with HDR400 support, a better sound system, more far-field microphones, plus the usual processor and performance upgrades. Oh, and there's an optional carbon fiber weave pattern for those bored with a plain black lid.

But these are pretty incremental updates. With stiff competition from rivals like Dell and HP, as well as newer players like Microsoft and Huawei, are these minor tweaks enough to maintain the X1's reputation as one of the best laptops around?

Every time I pick up an X1 Carbon, I'm impressed. The 14-inch laptop may have a no-nonsense, business-only aesthetic, but it feels more luxurious than its exterior lets on. This year, Lenovo added a carbon-fiber weave to the lid to update the X1's look a little, and I appreciate the effort to keep things fresh. Though, you can only get it on the UHD model. Formula One fans might like it, since I hear this McLaren-inspired style is all the rage. (I'm looking at you, OnePlus.)

More important than the appearance is the material that inspired it. This year's X1 laptop, like its recent predecessors, has an extremely light carbon fiber chassis covered in a gorgeous but somewhat sensitive soft-touch coating. It's sturdy enough to absorb a fall from your arms, but I've had this laptop for just under a week and it already looks a little scuffed up from general use.

Those who have a ton of peripherals will appreciate the X1's generous array of connectivity options, which include two Thunderbolt 3 USB-C ports, an HDMI socket, two USB-A jacks and an Ethernet extension. That's much more than you'll find on the likes of the Huawei MateBook 14 and Surface Laptop 2, which doesn't even offer USB-C power charging. 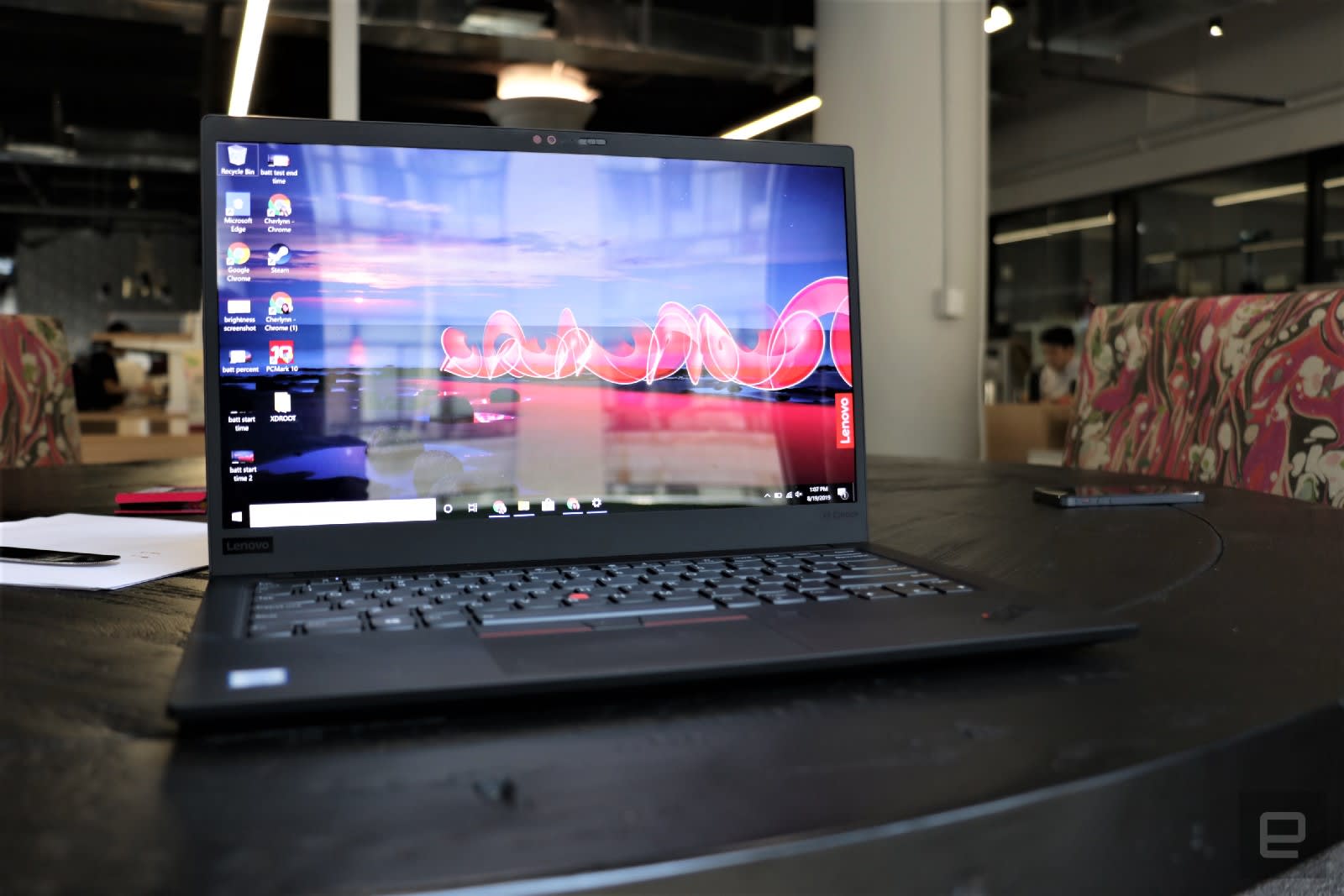 ThinkPads consistently have great keyboards and the X1 Carbon once again gets it right. Mostly, anyway. I love the deep travel and comfortable keys, and typing on a ThinkPad feels like a luxury compared to the merely decent experience on the Laptop 2 and MateBook 14. But I have an issue with some of the button placements on the X1 Carbon. In particular, I hate where the left Control button sits. Instead of being the leftmost button on the bottom row, it's actually the second last, and a Function key sits on the end.

That might make perfect sense if you're coming over from a MacBook, but as a PC person I'm used to the arrangement being the other way around, and it really messed up my flow when using keyboard shortcuts. It's frustrating to think you're hitting Control Z or Control C and V, only to realize your action wasn't undone or your text wasn't copied because you'd pressed Function instead. This isn't a dealbreaker, but it's annoying.

I also wish the Page up and Down buttons were a little higher or bigger. Where they sit above the left and right arrow keys right now makes them too easy to hit when I'm trying to jump between words instead of scrolling up or down.

As usual on a ThinkPad, there's a red pointing stick sitting in the middle of the keyboard. It's nice to have if you're a fan, but easy enough to ignore. You'll prefer using the trackpad instead, which is smooth and responsive, although I wish it were slightly roomier. Next to the trackpad below the keyboard sits a fingerprint sensor, for quickly logging in. 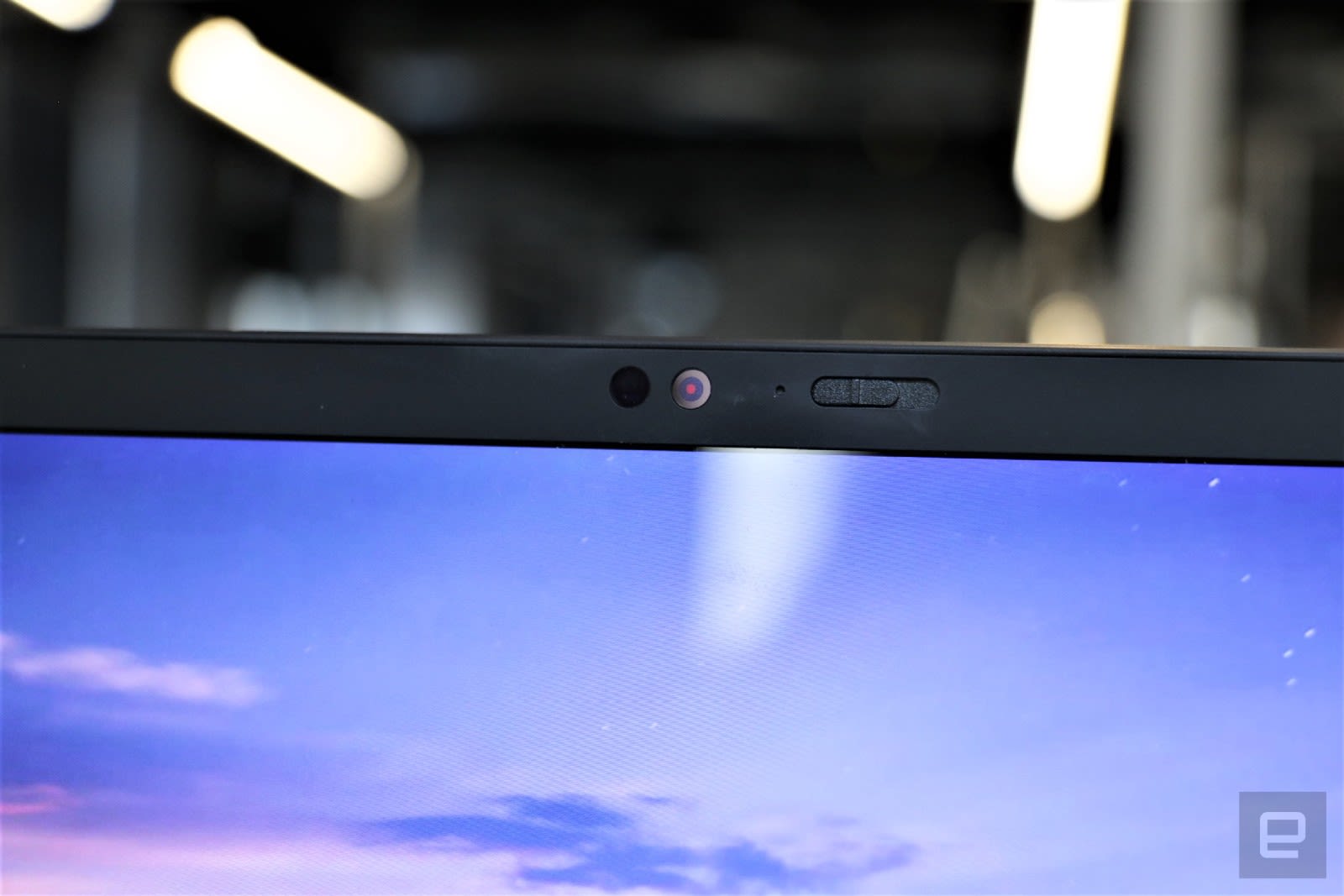 You'll want to set up the fingerprint sensor, since the Windows Hello-enabled webcam above the display doesn't work very well. In my testing, the system failed to recognize me about 30 percent of the time. It tended to struggle in situations that were backlit, but sometimes it had trouble finding me even if I was sitting just an arm's length away. I don't have as much of an issue with Windows Hello on a Surface Laptop 2, which might be due to its better camera.

Windows Hello also isn't ideal if you're privacy conscious and keep your webcam covered. Though, I've got to give Lenovo credit for making it easy to cover and uncover the camera with a built-in shutter. All you've got to do is slide a lever above the screen.

Speaking of, I have a small complaint about the display. When using the keyboard buttons to toggle brightness, the increase between each step up is uneven. From levels 1 to 9, the screen gets gradually brighter by about the same amount each time. But from 9 to the maximum 10, the jump is huge and almost blinding. Lenovo told me this is normal for the X1. It might not be a huge issue, but I was confused why the screen was so dim until I pushed brightness to the 500-nit maximum, and the lack of a more nuanced middle ground between the last two options felt limiting. You can get a more specific level of brightness by using the onscreen slider in Settings. 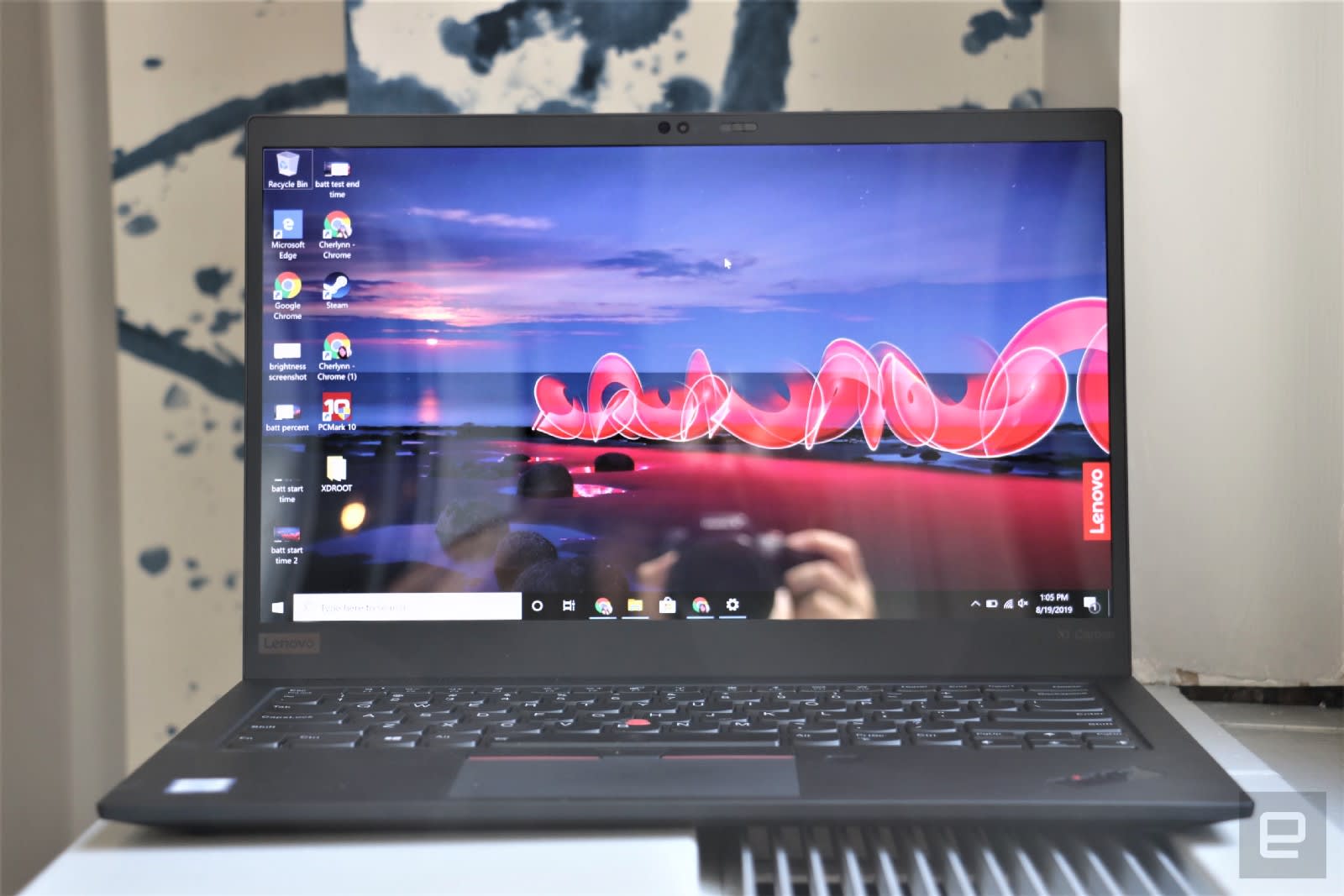 Other than that gripe, I generally enjoyed using the X1 Carbon to watch Netflix or YouTube videos. Details were always crisp and colors vibrant, if a little on the pink side. Audio was a little disappointing though -- despite packing a new quad-speaker Dolby Atmos system, the X1 Carbon's sound was slightly hollow. This has been a problem for the X1 series since day one.

So far, the X1 Carbon and its 8th-gen Intel Core i7 processor have managed to handle my daily workload without a hiccup. More taxing tasks, like editing photos or spreadsheets, went smoothly. But, and don't tell my boss I did this at work, playing Overcooked was a real challenge and I saw significant lag on the UHD model I was using. I switched to full HD in the game and it played slightly smoother, but I still don't think the integrated Intel UHD 620 graphics here can really handle gaming.

The X1 Carbon almost got me through a work day without needing a charge. I unplugged my UHD model at noon and it wasn't until about 7pm that I got a low battery warning. On our battery test, the lower-res Full HD X1 Carbon lasted 14 hours, which is twice as long as the 7 hours clocked by my UHD version on the same test. The higher-res model also has a brighter screen, which might have caused more drain.

Despite a smattering of small complaints, the ThinkPad X1 Carbon is still a strong business laptop that will appeal to its diehard fans. The build quality, keyboard performance and battery life are all great, at least if you don't mind passing on the UHD screen. For its $1,200 starting price though, the X1 Carbon has serious competition from the likes of the Surface Laptop 2 and Huawei Matebook 14. But Lenovo's appealing keyboard alone may just keep its fans coming back for more.