Hell is sitting in a hot yoga class waiting for your Fitbit to sync.

It was my fourth day of reviewing the new Versa 2, and I'd been having connectivity issues since the day after I received it. The watch refused to sync with my phone after initially pairing with no issue. I wasn't surprised -- this has happened with pretty much every one of the many Fitbits I've reviewed in the past. But that makes it all the more frustrating. I'm not the only reviewer with this issue either, and I haven't had major connectivity troubles with any other wearable I've tested. Samsung watches in particular connect quickly to my Android phones, as do most Wear OS devices.

But as much as I want to keep complaining about the Versa 2's connectivity issues, this review isn't just about those problems. No, this is about whether the Versa 2 is worth your money and why you should or shouldn't buy it.

Maybe you're a first-time fitness watch buyer, or maybe you're considering an upgrade from an existing Fitbit. Either way, the Versa 2 is a compelling device, at least on paper. For just $200, it offers comprehensive health-tracking, a colorful and bright AMOLED display and a pretty aesthetic that resembles the Apple Watch, for better or worse. This year's Versa offers Alexa integration, making the watch a bit more helpful. It also promises to last up to five days on a charge, and provides insights from Fitbit's vast database of information gleaned from its decade of tracking people's data. But the Versa 2's inconsistent connectivity ultimately keeps it from being truly reliable.

The Versa 2's most intriguing feature is its Alexa integration, because it makes the previously limited Fitbit OS a bit more functional. Hold down the Versa 2's button to summon Alexa, and you can tell it to find nearby gyms or for the weather report. This generally worked during my testing, and I was surprised that Alexa was able to return a list of yoga studios around my hotel in Berlin. You can use this to control your smart home devices, create reminders, set alarms or for calorie count of foods. Just don't expect it to be able to do everything the smart speaker can do -- calling another Alexa device, for example, isn't supported.

As a warning, when your Fitbit loses its connection to your phone, as it did a few times during my trip, you won't be able to use Alexa.

While Fitbit has an advantage over the competition thanks to years of experience in the fitness wearable space, it's also historically lagged its rivals on screen technology and software. The good news is, the Versa 2 finally has an AMOLED panel that makes outdoor viewability easier. The deeper blacks translate to sharper contrast, especially for brightly colored words and graphics. I generally had no issue seeing the time and my notifications, even under direct sunlight.

Like the original Versa and the Versa Lite before it, this new watch has a comfortable, lightweight design that looks and feels classy. I'm a fan of the rose gold case, though I wish the strap were a little slimmer. Fitbit tweaked the sensor hub on the underside to make it softer against the skin. I usually don't like wearing a watch to sleep, but I barely felt the Versa 2 on my wrist at all as I plunged deep into lalaland during an exhausting week covering the tradeshow IFA. 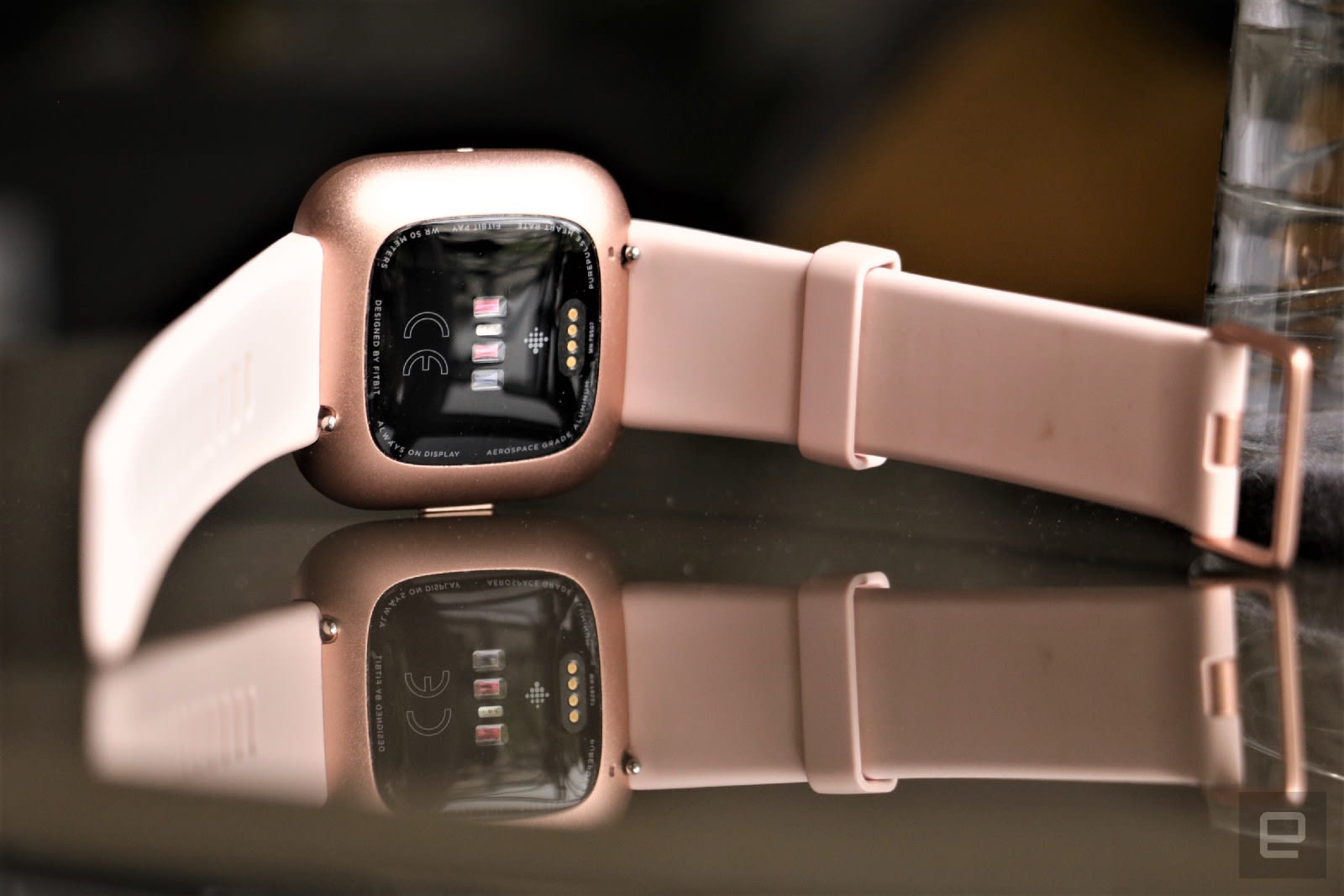 Speaking of bedtime, Fitbit's sleep-tracking tool continues to use the heart rate monitor to detect how deeply you're resting. A new Sleep Score feature launched around the same time as Versa 2, and so far it seems accurate. I've understandably been getting terrible scores in the 70s and 60s out of 100. Most of this is because I simply haven't slept much, as I get to bed late after days of briefings and late-night writing. Jetlag has also contributed to the poor quality of sleep, so I get why Fitbit penalized me. A Fitbit spokesperson said that 50 percent of the score is based on the duration of sleep, 25 percent is determined by the amount of time spent in restorative rest and the final quarter is calculated from the length of time in deep and REM sleep stages.

The scoring system has been strangely effective at motivating me to go to bed earlier, probably because it appeals to the overachiever in me. It's also easier to gauge my "performance" when it's a number rather than trying to decipher a chart.

The rest of the Versa 2's activity-tracking features, particularly its workout tools, are the same as its predecessor. You'll still get the Relax app to guide you through breathing exercises when you're stressed; movement reminders when you've been idle for an hour; and step counting, which came in handy during IFA. All this info is displayed neatly in the Today dashboard, which you can find by swiping up on the home screen. Fitbit also offers period tracking, which is surprisingly accurate, though the interface hasn't improved much since my initial review of this feature.

Fitbit also continues to update its OS, which debuted after the company bought smartwatch pioneer Pebble three years ago. This time around, the company updated the interface to feature a tidied-up Quick Settings panel. When you swipe down from the home screen, you'll see all your collected notifications, and a panel that slides down, displaying icons for music controls, Fitbit Pay and more settings. Tap that last one, and another page appears with toggles for Do Not Disturb, Night Mode, Always On Display, brightness and Screen Wake (when you flip your wrist).

I'm all for some Marie Kondo-esque tidying up, but I'm perplexed by Fitbit's decision here. The settings shade is like a pop-up ad when it slides down, blocking a third of the notifications screen. The fact that you need to tap one more time to get to more switches is even more frustrating. Plus, there's an entire wasted section to the left of the home screen that doesn't display any information. This could be used for notifications, freeing up room from the quick settings shade for more buttons.

The sheer number of steps needed to, say, toggle Do Not Disturb mode or adjust the brightness is annoying, but the process is straightforward. What is befuddling is that Fitbit uses ambiguous icons for its quick settings control panel. I asked my Apple Watch-wearing colleague Mat Smith to guess what the five icons on the Versa 2 were for and he guessed only one of the five correctly. Do Not Disturb, with its "no-entry" symbol, is obvious enough.

But Mat guessed the crescent moon was for Sleep mode to activate sleep-tracking; the clock-face graphic was for stopwatch, and a watch silhouette with action lines behind it was for vibration. They were actually for Sleep Mode (silence notification and lock screen, not tracking your slumber), Always On Display and Wrist Wake, respectively. The only reason I knew what these were for is that an explainer appears after you tap each button. Before I touched any of them, though, my only option was to hazard a guess as to what they meant. Sure, Mat may have made some dumb guesses (he had no idea that the sun icon was for brightness), but I'm a seasoned Fitbit user and I was still confused. 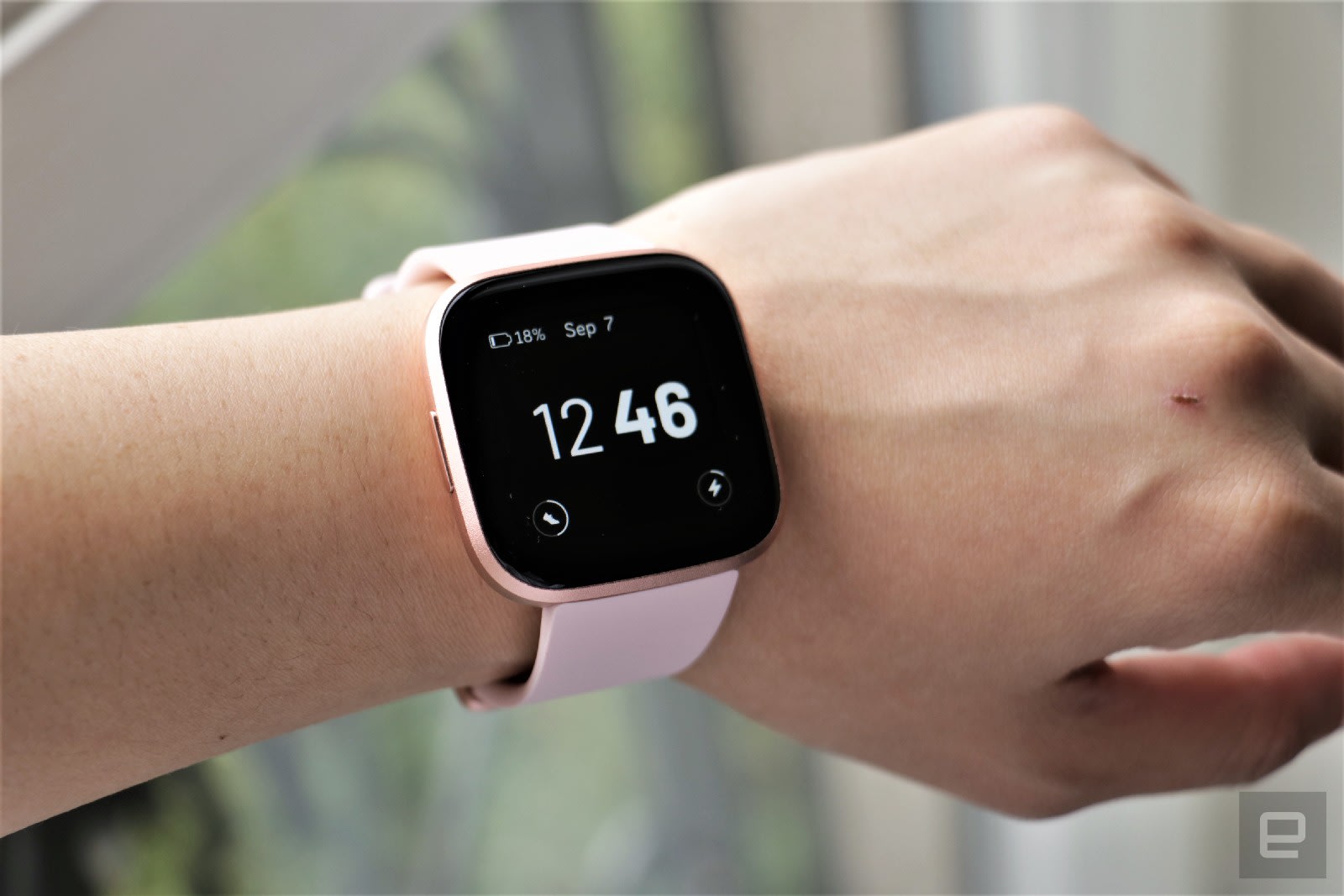 In its attempt to clean up the Versa 2's design, Fitbit also got rid of two physical buttons on the watch's right side, leaving behind a single one on the left. Press this once, and you go back one page. Long press it, and you can either summon Alexa or enable Fitbit Pay (which then makes the dedicated button in the settings shade redundant). I appreciate Fitbit simplifying its navigation system, but I really hate that reaching across the screen to push this physical button is the only way to go back a page. In Wear OS or Tizen, you can swipe right to go to the previous page, which is a more intuitive way to interact with a swipe-heavy OS.

The good news is, thanks to the upgraded processor, the Versa 2 felt more responsive than its predecessor. Apps like Relax and Weather loaded faster this time around, but anything reliant on a phone connection, like GPS or Alexa, still had a tendency to crawl.

It may sound like I'm nit-picking about connectivity, but if you're considering upgrading from an old Fitbit or travel frequently enough that you activate your phone's airplane mode a lot, this will be an issue for you too. You'll have to keep re-trying to connect your devices when you disable the Bluetooth connection. Plus, the failure to sync happened multiple times during my testing. For no real reason, the Versa 2 would be unable to sync with my phone. Worse, notifications from my Pixel 3 stopped showing up on the watch, which lulled me into a false belief that no one was looking for me when I stepped away from my phone.

I'm pretty annoyed at Fitbit for its bad connectivity, but at least the company delivers on its battery life promises. I unplugged the Versa 2 on Sunday before I left for Germany, and by Friday evening it was still showing a respectable 23 percent of juice remaining. I've mostly had the display set to medium brightness and have only tracked one workout, plus my notifications sometimes stopped showing up, so that might explain the long runtime. When I enabled Always On Display, the Versa 2's battery life plummeted to barely two days. I preferred not having to charge the Versa 2 every other day so I left the feature disabled. 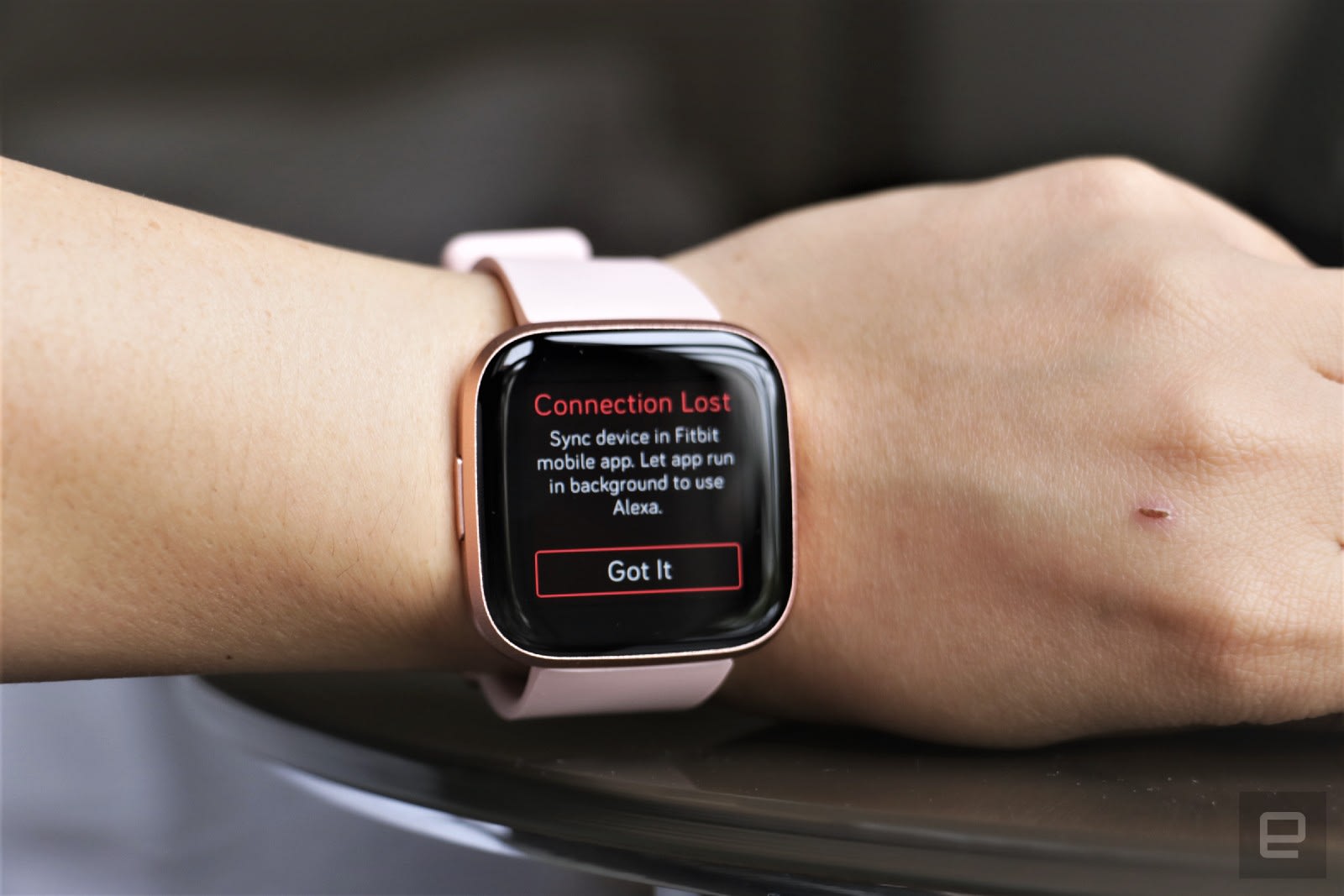 If not for its connectivity problems, the Versa 2 would be an excellent smartwatch. It offers accurate, comprehensive fitness features and a nice design for a reasonable price. It's also one of the longest-lasting smartwatches around, while the Alexa integration makes it more useful than its predecessor. I just wish Fitbit would get its Bluetooth act together already, and give me a better OS.

All products recommended by Engadget are selected by our editorial team, independent of our parent company. Some of our stories include affiliate links. If you buy something through one of these links, we may earn an affiliate commission. All prices are correct at the time of publishing.
View All Comments
Fitbit Versa 2 review: A good, but unreliable fitness watch