Smart camera features and the addition of a Nest Cam function puts it over the top.
N. Lee|09.09.19
@nicole

Last year, Google took on Amazon's Echo Show with a whole line of third-party Google Smart Displays. Then it revealed a rival of its very own, the Google Home Hub (since been renamed to "Nest Hub"). Its 7-inch screen and adorable form factor, plus its lack of camera, added up to a more personal take on the smart display, ideal for private spaces like the bedroom.

Now, Google is ready to go big. At the I/O developer conference this year, the company unveiled the Nest Hub Max ($229), which has a larger 10-inch display and a camera, which works much better in communal spaces. There are similar smart displays, of course, but Google has wisely snuck a few AI tricks in the Hub Max that sets it apart from the competition. Whether these tricks are necessary, however, is another question.

As its name suggests, the Nest Hub Max is a larger version of the Nest Hub. The two are almost identical, except, of course, for the Hub Max's bigger screen and that aforementioned camera. As a result, the Hub Max's size is more in line with most other smart displays on the market, like the 10-inch Lenovo Smart Display, the new Echo Show and the JBL LinkView. And just like them, the Hub Max is meant to be used in shared areas in your home, like the family room or kitchen, where a larger screen makes more sense.

Of course, one obvious benefit of the bigger display is that it significantly improves the photo- and video-viewing experience. Images look crisp and colorful, and I particularly enjoyed watching YouTube and YouTube TV as I puttered around the kitchen. While I wouldn't want to watch a whole TV show on the smaller Nest Hub, I wouldn't mind at all on the 10-inch Hub Max, especially because I can do so from farther away.

Sitting next to the camera is an ambient light sensor that adjusts the screen's brightness and warmth according to its surroundings. The stand is clad in a soft fabric (chalk/light gray or charcoal/dark gray) and on the rear is a volume rocker plus a microphone-mute toggle. With the Hub Max, disabling the microphone also shuts the camera off electronically. If I decide I want the microphone on but the camera off, I can swipe up on the screen and tap the camera icon there. There's no physical camera cover, however, which might be a little unsettling if you're paranoid. Still, the screen does have a persistent notification sign whenever the microphone or camera is off, which might allay some fears. 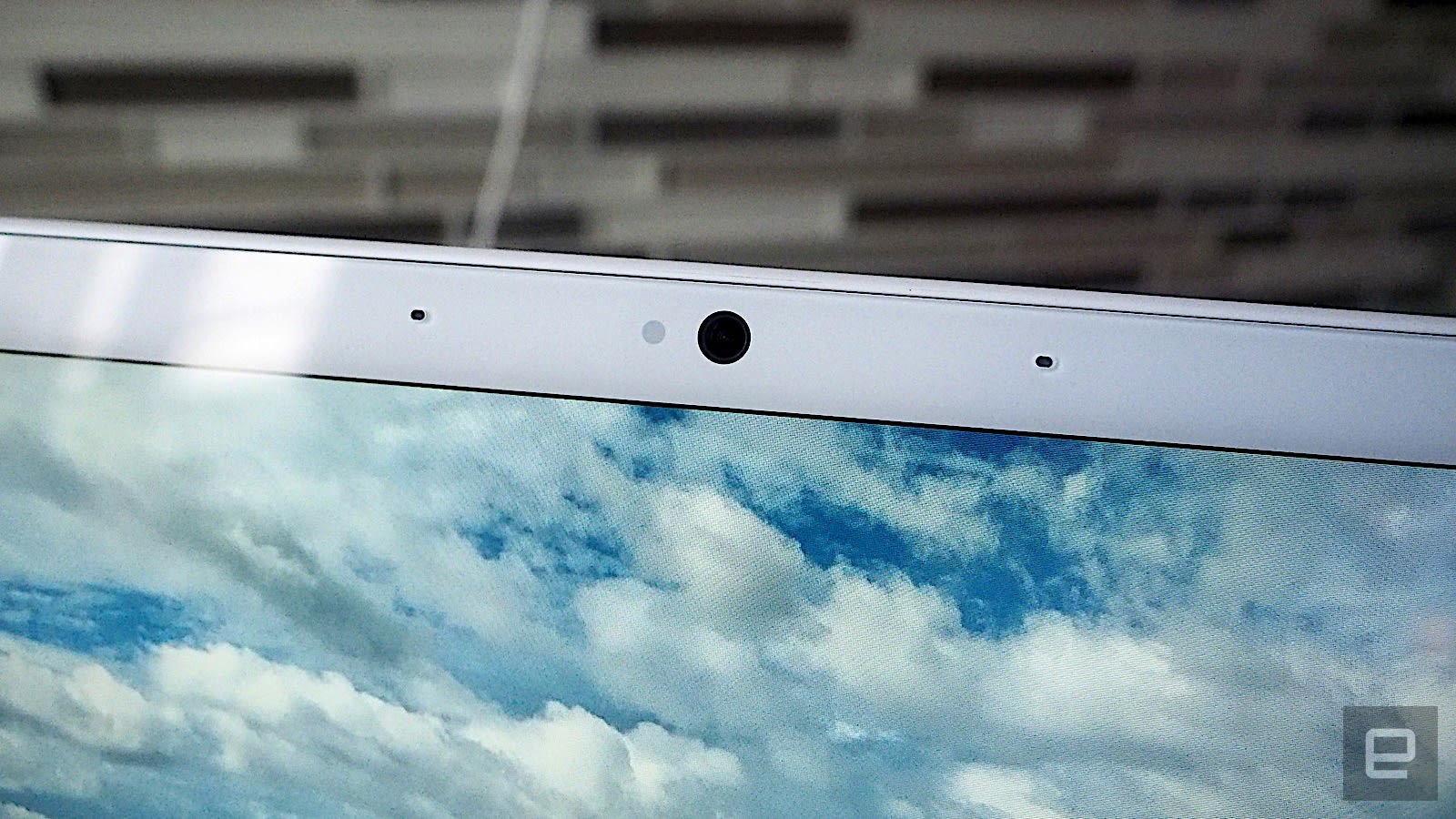 If you do turn the camera off, know that you'll be missing out on the bulk of the Hub Max's features. For one thing, the camera enables Face Match, which recognizes you when you're in its view. Just as with Voice Match (Google's voice-recognition tech), this enables the Hub Max to show you messages and reminders that are relevant only to you, and not your housemate. In my experience, I found Face Match to be more reliable than Voice Match. Voice Match has been a little hit or miss for me with other Google products, but Face Match on the Hub Max worked almost every time, even when I wasn't wearing glasses.

Perhaps the coolest feature that the camera enables is Quick Gestures. So whenever I'm watching a video or listening to a song, I can pause whatever's playing by looking at the screen and raising my hand. To resume playback, I simply repeat the same gesture. The idea behind this is that you can control the media even when the environment is too loud for the Assistant to hear you. I have to admit that I needed to practice the gesture a few times before I managed to get the Hub Max to recognize it regularly. Additionally, I noticed that sometimes I would raise my hand but not look at it, and it would still trigger. It also doesn't work consistently if I perform the gesture several feet from the camera.

I like having these gestures as an option for controlling media playback, but honestly, I found myself using my voice most of the time. Seeing as you have to be pretty close to the screen for the gesture to work, it might be easier to just, you know, tap the display instead. Google did say it's working on adding more Quick Gesture functions, so maybe future updates will be more useful. 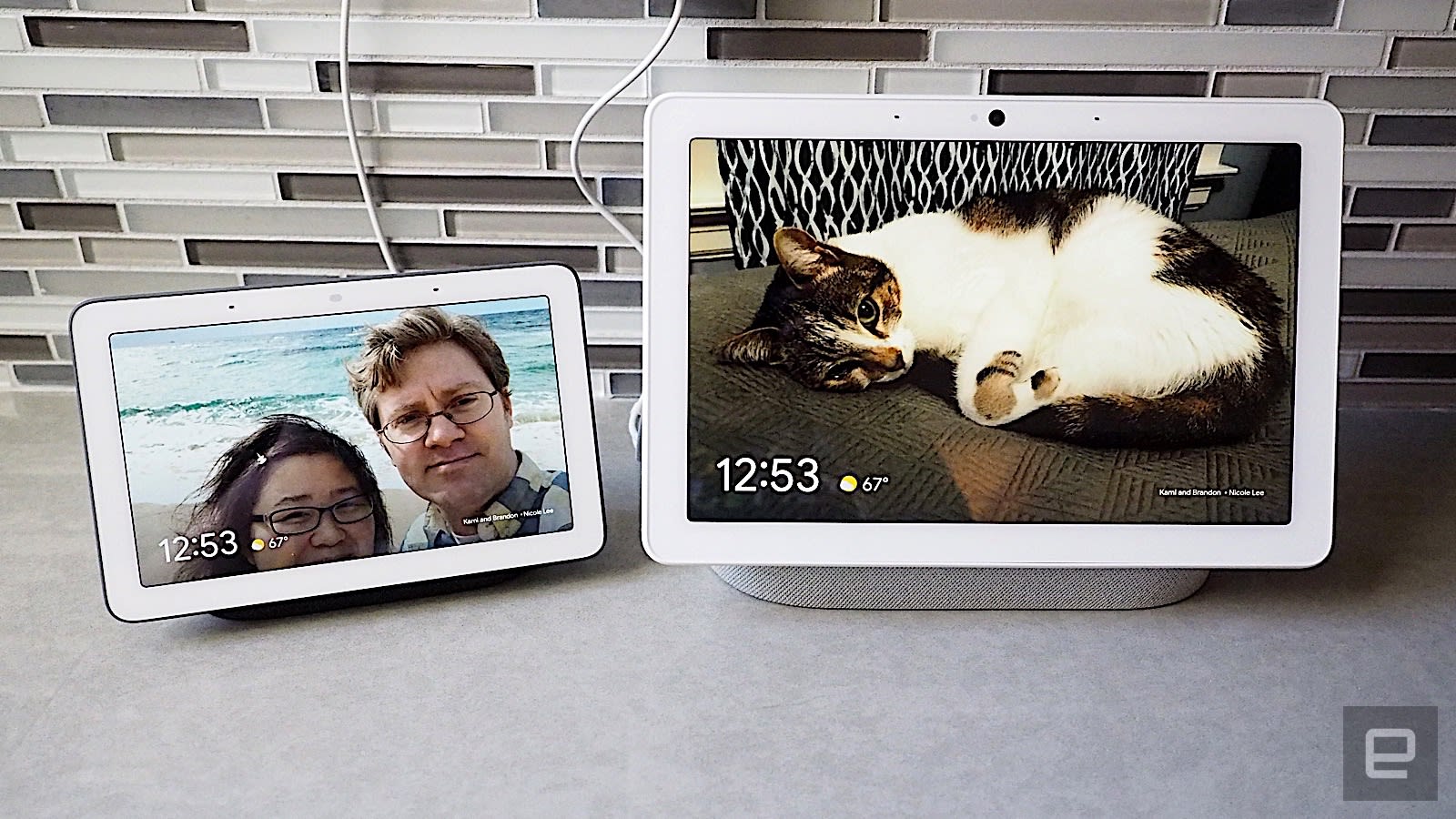 Another benefit of that 6.5-megapixel camera is video calling, which is available only via Google's Duo service. This isn't unique -- other Google displays like the Lenovo Smart Display and the JBL LinkView have Duo video calling too -- but the Hub Max offers an additional feature: Auto Framing. When enabled, you will always be the center of the frame, no matter where you are in the room. It's almost as if the camera is panning and zooming in on my face as I walk around (it's actually all done digitally via computer vision and AI). It looks and feels exactly like the face-tracking tech in Facebook's Portal line of displays. The "camera" panning and zooming as it follows me around is so realistic and accurate that it can feel a little creepy.

For example, when other people come into the camera's generous 127-degree field of view, the Auto Framing tech positions the shot to capture everyone. I tried this out with me and my husband, and it did this remarkably well, even as we moved and danced around the room. When we were both standing next to each other, the software zoomed in on our faces/upper bodies. But when we were at the opposite ends of the room, it zoomed out to attempt to capture both of us in the shot. That said, I noticed that when there were multiple people, I wasn't able to focus on just one person by tapping on the screen, which is something you can do on the Portal.

Though this issue is not unique to the Hub Max, I am disappointed that the only video-calling service available on this device is Duo. Adding contacts is kind of a pain -- both sides need to set up a Duo account -- and the contacts list on the Duo app on your phone is not necessarily the same as the Duo contacts in the Hub Max. That's because the app relies on your phone's address book, while the Hub Max pulls its contacts from the Google Contacts list on the web. Yes, you can sync them, but I found this to be tedious. 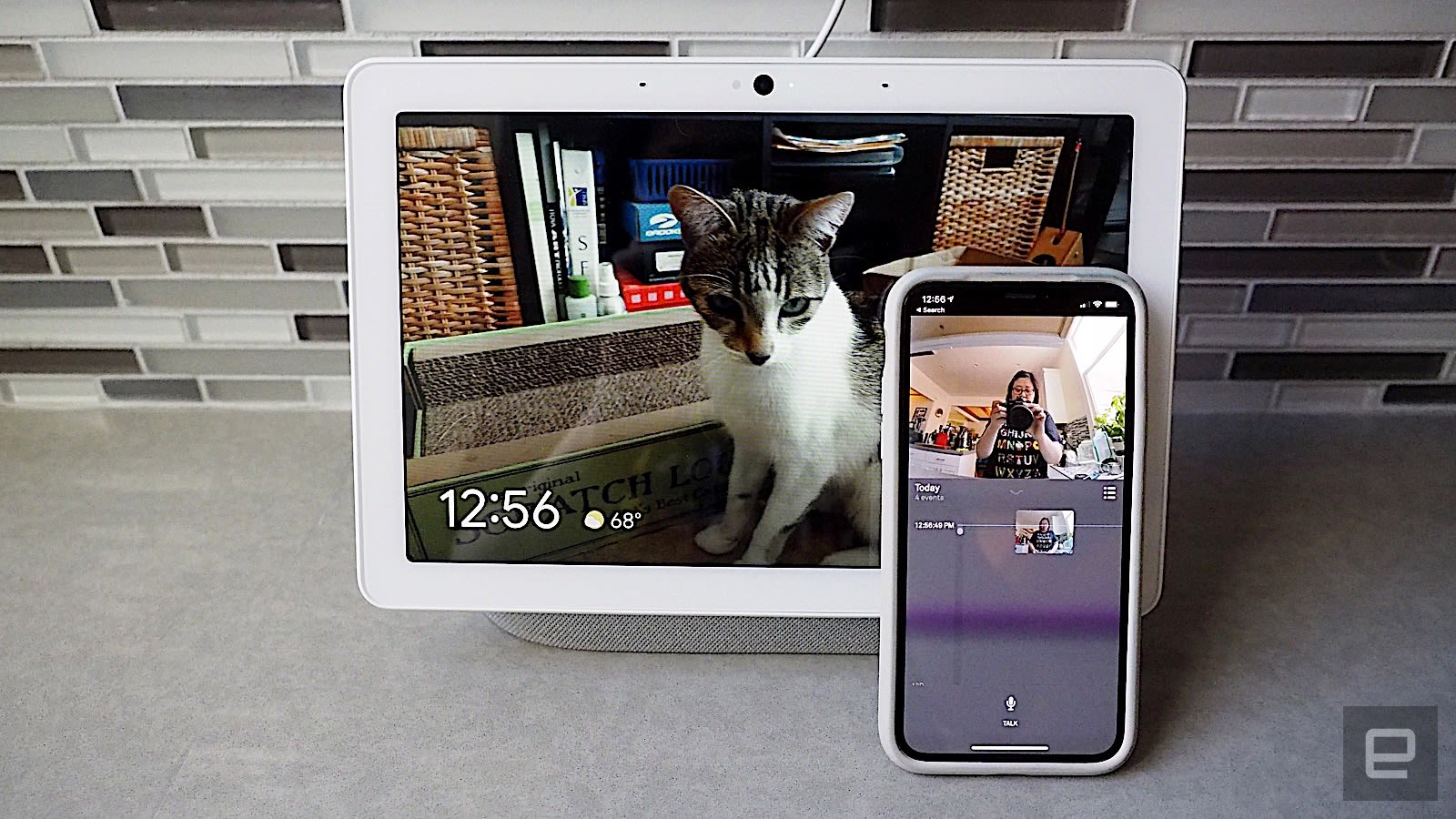 Aside from video calling, the camera on the Hub Max can double as a Nest Cam, which is a feature that no other Google Smart Display has. This is one of the reasons Google wanted to integrate the Nest brand into the Google family. The Nest Cam on the Hub Max works the same way as other Nest Cams; when enabled, you can check out what it's pointing at from the Nest app on your phone, as well as other Google Smart Displays. When the Nest Cam function is on, the LED next to the camera glows solid green, letting you know the camera is running.

When someone pulls up the Nest Cam app to view the feed, the LED will pulse, alerting you that someone is watching. Just like other Nest Cams, you can toggle the Home/Away setting, which shuts the Nest Cam feed off when you're home, and turns it on when you're away.

As for sound quality, the Nest Hub Max is much better than the Nest Hub. Thanks to two front-facing tweeters and one rear-facing woofer, high notes sounded clean and clear, while bass was satisfyingly deep and rich. No, it's not quite as good as a multiroom Sonos setup, of course, but as a standalone speaker for playing party jams, the Hub Max should more than suffice. 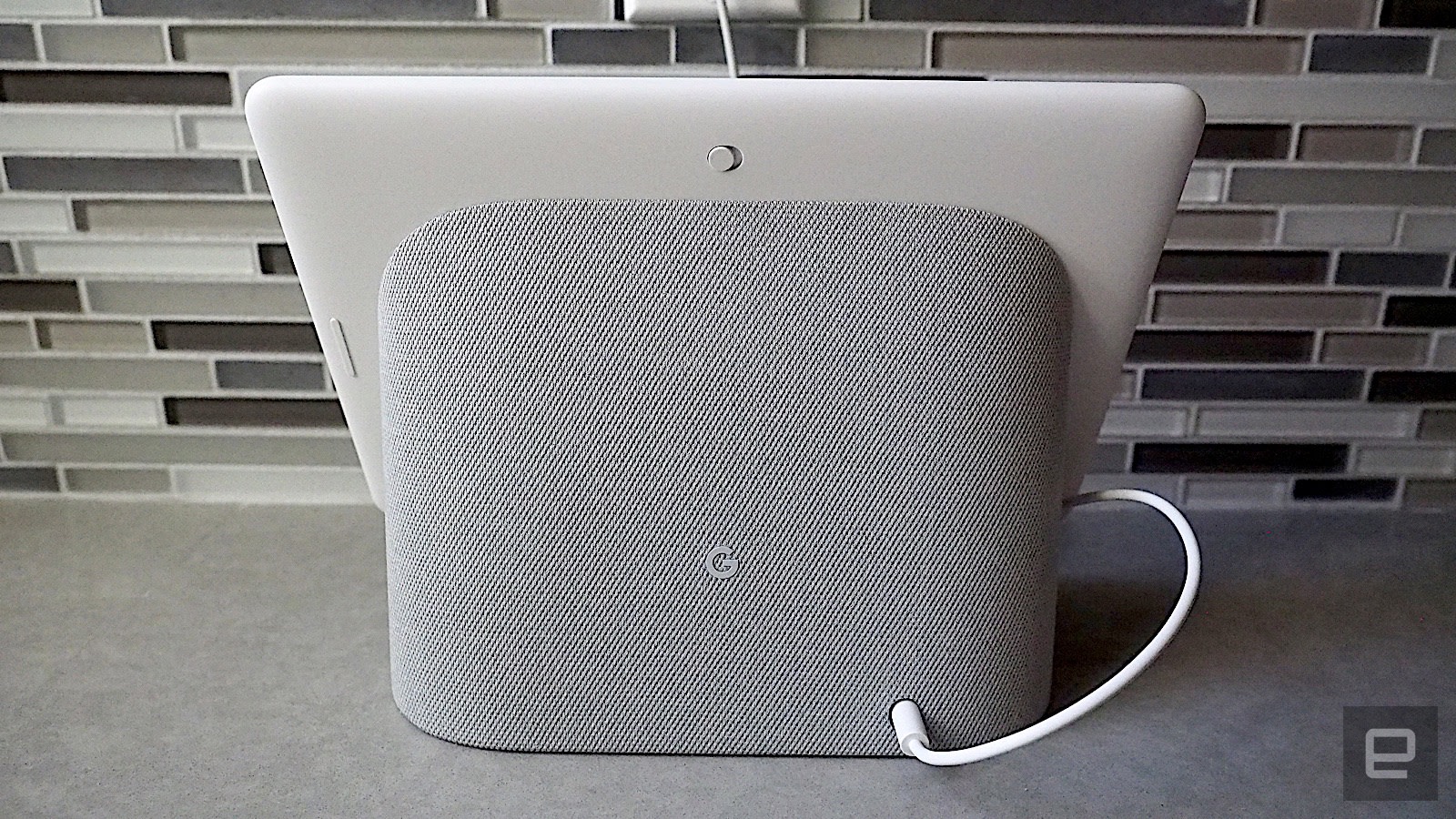 Aside from all that, the Nest Hub Max has many of the features as other Google Smart Displays. As I mentioned, it plays YouTube and YouTube TV (if you subscribe to it), and you can use it to view your calendar, set reminders, alarms and timers, check the weather, play songs, and control your smart lights. It has all of the regular functions of the Google Assistant.

With its large 10-inch size and built-in camera, the Google Nest Hub Max has all of the features of other 10-inch Google Smart Displays, and then some. Thanks to AI and computer-vision smarts, the Hub Max uses the camera in new, clever ways, such as Face Matching, gestures, and Auto-Framing in video calls. As a bonus, it also has Nest Cam integration, which works if you want an additional webcam in the home to keep an eye on what's going on when you're away.

Seeing as other Google Smart Displays cost around the same price or more, the Nest Hub Max offers a lot more features. Yes, some of those camera features are on the gimmicky side -- those gestures, for example -- but if you really want a Google Smart Display with video calling that also works as a Nest Cam, the Hub Max fits the bill.