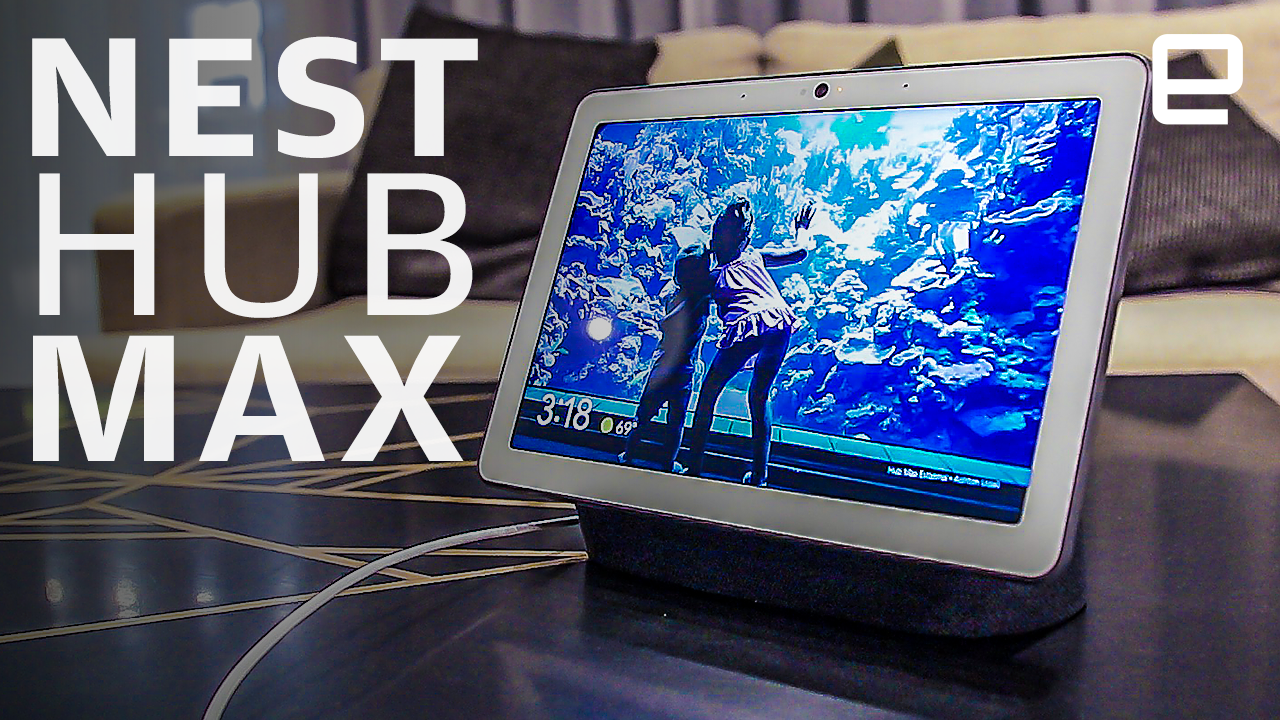 I was surprised by how much I liked last year's Google Home Hub. The 7-inch smart display won me over with its beautiful screen and adorable design. It was also popular with other reviewers, who praised its clever Assistant features, affordable price and Photos integration. This year, Google has a bigger, more powerful model: the Nest Hub Max. Unveiled at the company's I/O developer conference today, the Hub Max is a 10-inch display that looks like a stretched-out Home Hub. But there are a few other differences besides the size that make it more useful than the smaller version.

A quick word on that name

But first, let's get the product name out of the way. In case you didn't already know, Google owns Nest, the smart home company well-known for its thermostats and security cameras. Though the Nest and Google Home teams have been working closely since the acquisition, it hasn't been clear what would happen to the Nest brand, which carries a lot of cachet. We now have an answer. Moving forward, Google will rename more of its smart-home products to include the Nest name. The Google Nest Hub Max is the first product bearing that sort of coupled name; last year's Home Hub will be rebranded as the Google Nest Hub, too. As you'd expect, upcoming devices will have similar names. 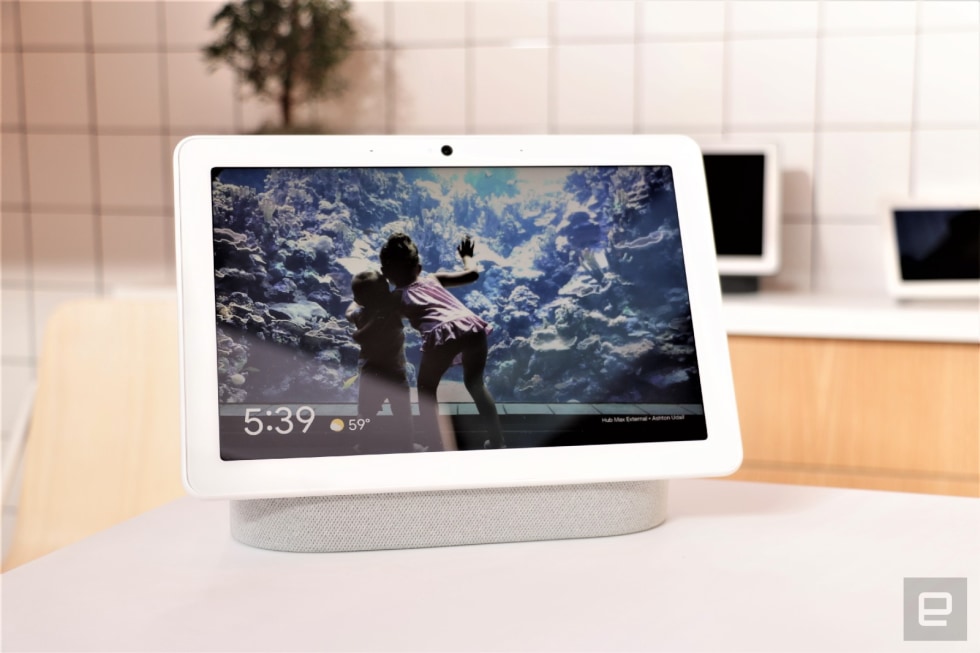 A bigger screen for videos

Think of the Nest Hub Max as a bigger Home Hub with a few extras. The Nest Hub Max has the same basic interface as its smaller stablemate. The home page is a rotating carousel of photos, and you can swipe sideways to see upcoming alarms, appointments and alerts. You can also cast videos to the Hub Max the way you can with the Home Hub -- but this still doesn't work with Netflix.

The 10-inch 720p screen feels like the right size for a kitchen. It should be great for recipes or half-watching Game of Thrones while you're doing some meal prep for the week. Like the Home Hub, it also has sensors that detect the surrounding light and color levels to adapt the screen's brightness and warmth appropriately.

With the 6.5-megapixel camera, you can use the Nest Hub Max to make Duo video calls to your loved ones. It has a generous 127-degree field of view, which is about the same as the Galaxy S10's wide-angle lens. During a test call, a colleague and I were able to easily accommodate all four people that were in our briefing (including two Google representatives who were on-site for the demo), along with pretty much everything else in the room.

But you don't always want your caller to see your entire kitchen during your conversation. To that end, the Hub Max offers a feature called Auto Framing that, when enabled, keeps you in the center of the scene. If there are others in the room with you, the system will include them in the frame, too. As you move around your room, the software follows you around and keeps you in focus. If this sounds familiar, it's because it's very similar to what Facebook's newish line of Portal displays do. 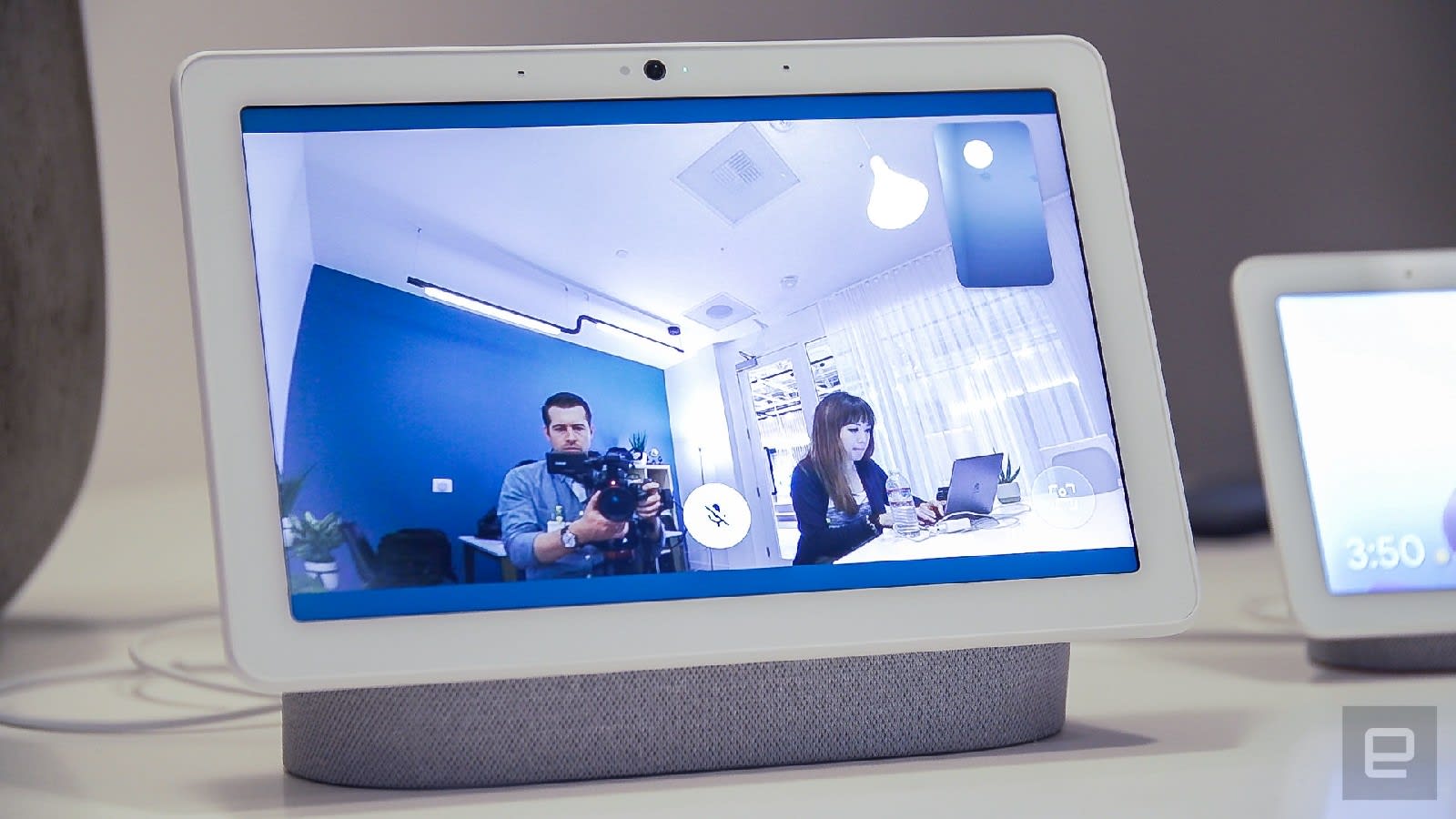 I haven't used the Portal, so I can't compare the accuracy of the two devices, but Google's new product is impressive in its own right. As the four of us moved about the room, spreading out and gathering close to the Hub Max, Auto Framing kept us all in the scene (as long as we were still within its sight). When three of us stayed in front of the display and the remaining one hovered at the far end of the room, the system zoomed out to the widest angle to keep all of us in view. When everyone stood in the middle of the room, Auto Framing zoomed in to focus on our tight-knit group. This software trick was fun to play with during our demo, but I'd like to do more testing, see how well it follows me when I pace my kitchen during video chats with my mom.

The camera does more than just enable video calls, though. The Nest Hub Max can recognize gestures to control your media. When you're playing a video, listening to a podcast or songs or even when the Assistant is speaking to you on the device, you can pause by looking at the screen and raising your hand. When you're ready, you can repeat the gesture to resume.

Google calls this Quick Gestures, and it's particularly helpful for times when it's too loud for Assistant to hear you ask it to pause -- like when you're surrounded by screaming kids, or there's noisy construction going on. It takes some practice to get the Hub Max to recognize your gestures consistently, and you have to make sure you're looking at the display before you raise your palm. After a few attempts, I nailed this maneuver and had a lot of fun pausing and resuming the video we were watching. For the most part, the Hub Max reacted near instantly.

My colleague Kyle Maack had some trouble getting the device to recognize him, though. You'll have to be careful not to obstruct your face and make sure to raise your palm next to your head, not too far away from or in front of you. 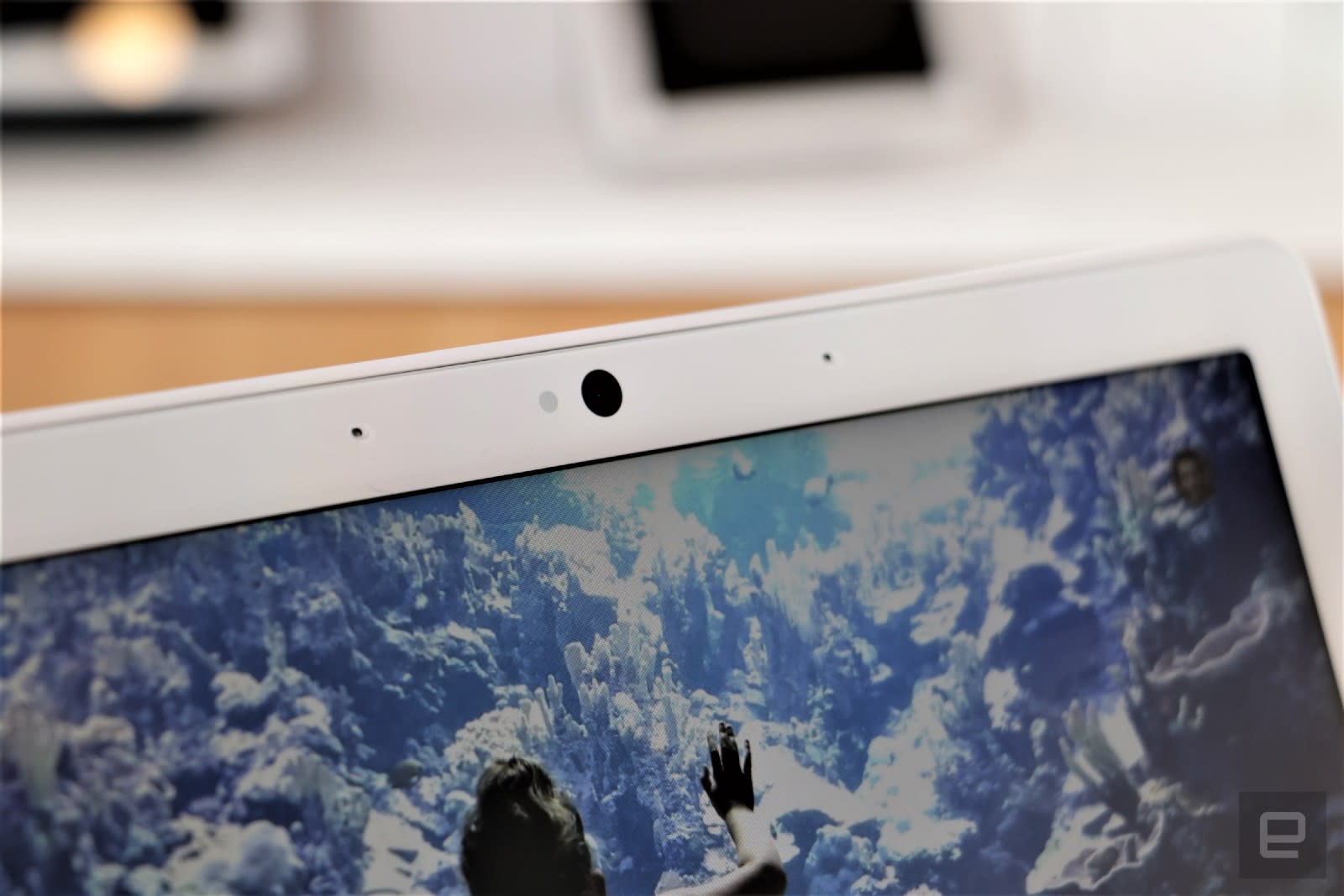 The camera also enables a new feature called Face Match, which works much like the existing Voice Match tool on Home devices. It recognizes registered users as they walk by and displays the alerts that are relevant to them. You can add up to six members in your household to grant them access to your Hub Max.

When product manager for the Nest Hub Max and Home Hub Ashton Udall walked behind us, for example, a small bubble appeared with his avatar on it. Then, cards for his missed video calls, upcoming events and other notifications slid on to the screen. A few seconds after he left the camera's field of view, the alerts faded away. Google calls this feature Proactive Notifications, and it's meant to make the Hub Max feel relevant to each user despite it being a device designed for shared use.

I was impressed by the camera's ability to recognize Udall even when he was standing about three feet away from it. Plus, the system picked him out each time he walked by, despite there being three other people in the room.

I've had trouble with other facial recognition systems because of how different I look with and without makeup, so I was concerned about how well Face Match would work for me. Udall reassured me that this is something the team has considered. "We tried to make the algorithms as robust as possible to help with different situations like makeup, glasses and facial hair," he said. 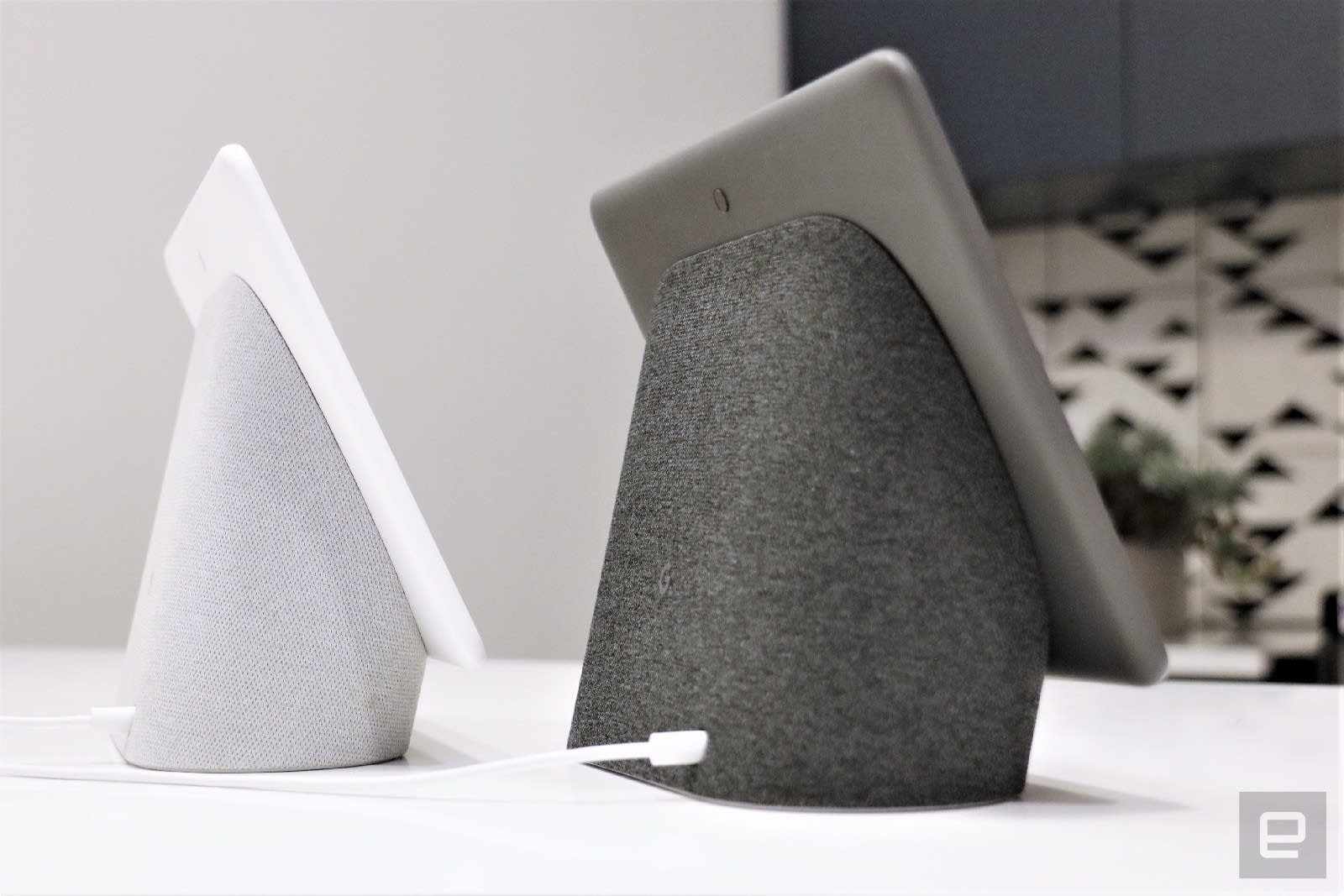 Since only Udall was set up to use Face Match with our demo Hub Max, I couldn't test that claim, so we'll have to revisit this when we eventually get the device in for review. I also couldn't tell how Proactive Notifications would behave if more than one registered user were within view. Google said in these situations, the system would prioritize showing content for the person who last entered its field of view.

Something else I didn't get to try during our demo was the Nest Hub Max's ability to act as a security camera. But Udall said you'd be able to add the smart display to your Nest network of security cameras and use it to keep an eye on your home when you're away. If you're planning on using this feature to spy on unsuspecting members of your household, though, be warned: Google has methods in place to prevent undetected camera streaming.

One of these measures is pretty straightforward: An LED next to the camera glows green when the Nest Hub Max is streaming its feed. During our Duo call demo, for example, the LED lit up to indicate the device was casting. This is supposed to help users feel reassured; if someone has hijacked your Hub Max and is watching you, at least the light will alert you to it. 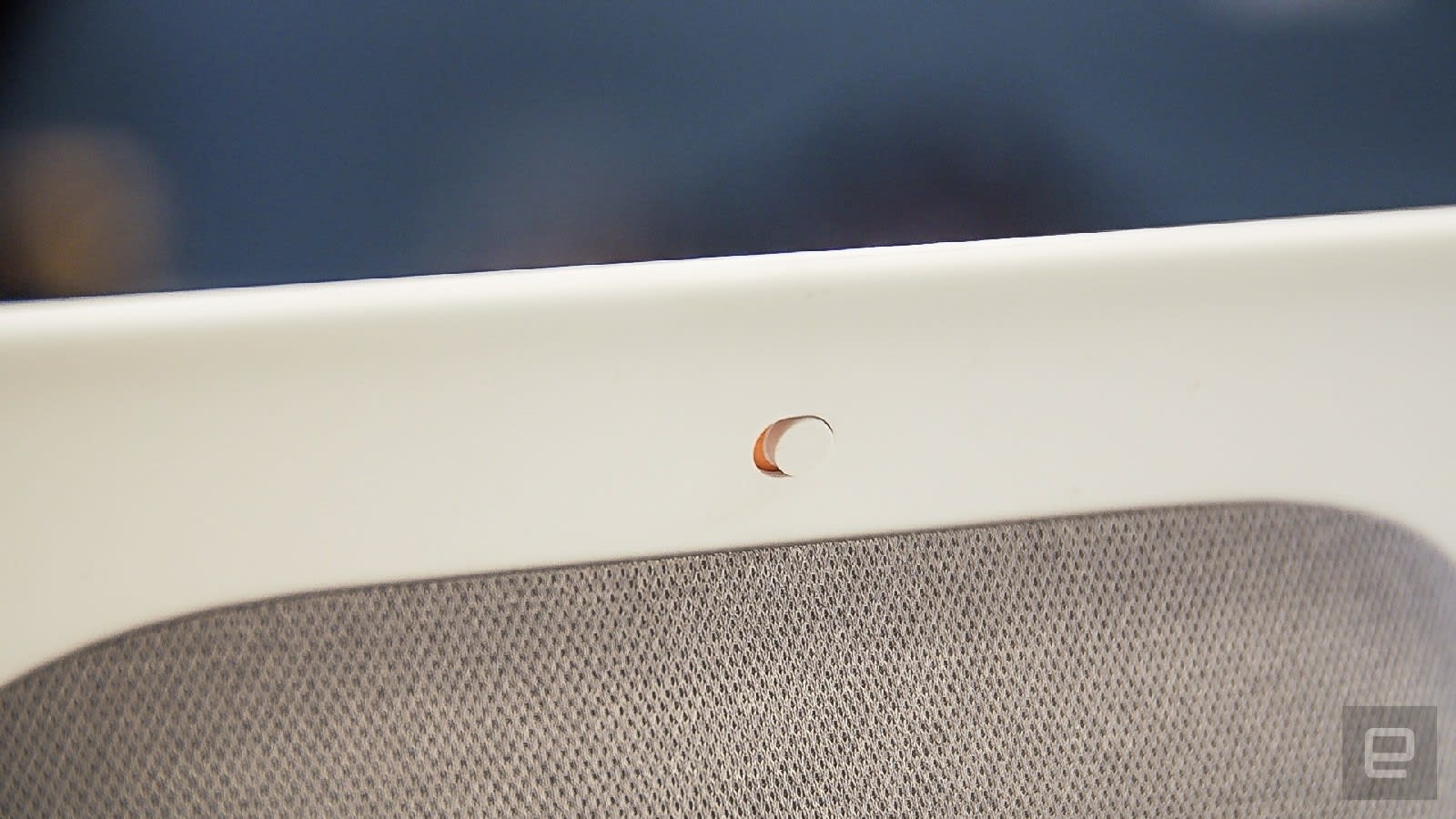 You'd probably feel safer if you could turn off the camera completely -- and you can by toggling the slider on the back. "It puts the camera in a state where it can't do anything," Udall said, adding that this effectively acts as a shutter. To be clear, there isn't a physical cover here, just the switch. The LED turns red when you disable the camera; doing so kills the microphone as well.

Keeping the camera off means you won't be able to use features like Quick Gestures or Face Match, but that might be good news for the more paranoid among us. Those who prefer privacy over convenience might be relieved to know all the services that use the camera are opt-in, so you won't unknowingly give away your facial data.

Google also says it's careful about the privacy of those who do choose to use these features. Pictures that are taken to recognize when you're raising your hand in Quick Gesture are deleted within seconds, according to Udall. The face models used in Face Match are created and stored on and won't leave the device. The philosophy here is "what happens in your home stays in your home," Udall said.

A louder set of speakers

The final difference between the Home Hub and the Nest Hub Max is audio. While last year's smart display simply had a full-range-driver speaker, the Hub Max packs a stereo setup that pumps out louder, more well-rounded music. In fact, the Hub Max was so loud that we heard it from the adjacent room while waiting for our demo to begin.

When Udall played Overnight by the Parcels, the bass was satisfyingly rich while notes in the higher range were clear. With the Hub Max, you won't need to buy a separate speaker just to play your party hits at your next poker night -- not unless you're an audio snob, anyway. 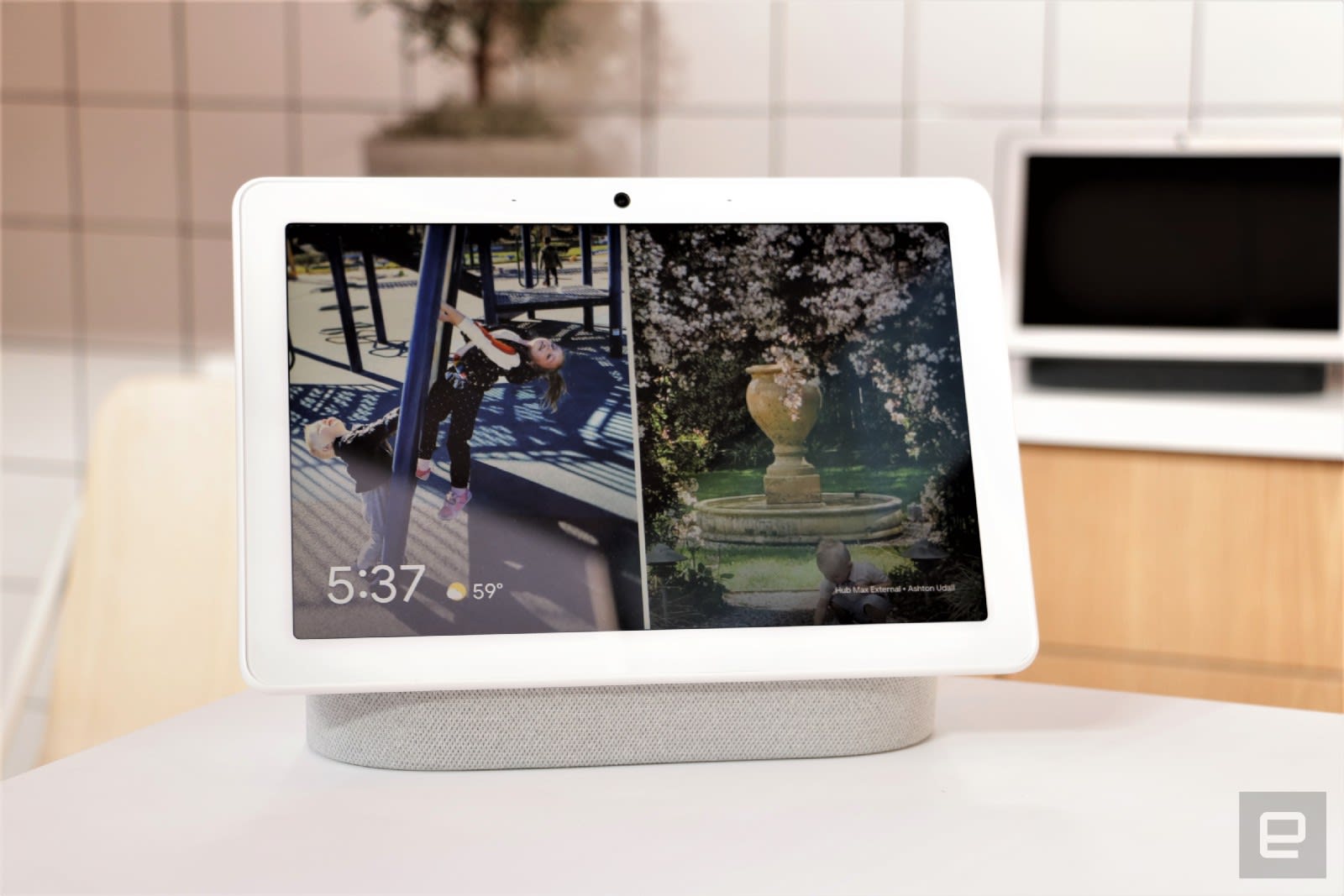 The Google Nest Hub Max will be available in the summer for $229, and it offers a surprisingly meaty set of new features for the price. Unfortunately, it'll only come in charcoal and chalk when it goes on sale, meaning the Home Hub's gorgeous mint and "sand" (pink) colors aren't options here. While there are definitely some kinks that Google still needs to iron out before the launch, the device already looks promising. I'm looking forward to spending more time with it to see how it holds up in the real world.

In this article: facebook, facebook portal, gadgetry, gadgets, gear, google, Google Assistant, google home hub, Google Nest Hub Max, googlehomehub, googleio2019, Googlenesthubmax, hands-on, home, Nest, Nest Hub Max, smart display, SmartDisplay, Google IO 2019
All products recommended by Engadget are selected by our editorial team, independent of our parent company. Some of our stories include affiliate links. If you buy something through one of these links, we may earn an affiliate commission.