They feature three cameras, better OLED screens, and more power than ever before. As usual, Apple's latest batch of iPhones aren't exactly surprising, thanks to plenty of detailed leaks throughout the year. Today, the company unveiled the iPhone 11 Pro and iPhone 11 Pro Max, its high-end smartphones that'll join the slightly cheaper iPhone 11. You might have noticed the name changes this time around: the 11 Pro models are direct successors to last year's "XS" phones, while the 11 is the cheaper alternative following the iPhone XR. There are a few design changes, like a "surgical-grade stainless steel" case and matte finish, but the iPhone 11 Pro and Pro Max are more focused on cramming in as much camera power as possible.

While the iPhone XS and XS Max featured two cameras, one for standard wide shots and another for telephoto and portrait pictures, the Pro models add a new 12MP ultra-wide lens like the iPhone 11. Similar to how a telephoto lens can zoom into a shot, the ultra-wide lens will let you zoom out a bit, allowing you to capture more of a scene without stepping back. The big takeaway is that you'll have a lot more flexibility when taking photos with iPhone 11 Pro and Pro Max.

For example, you can now choose from wide and telephoto modes for portrait photos, which will really help when you want to capture some nice bokeh in a tight space. The new 12MP telephoto lens also sports a large f/2.0 aperture, which lets it bring in 40 percent more light than last year's phones. Even the interface has been optimized -- you can hold your finger down on the shutter button to start recording video while you're in photo mode.

A new feature called Deep Fusion (arriving in the fall), will take nine photos across all three cameras and stitch them together into a single high-quality image. All of that camera power can be used in truly unique ways, too. The app Filmic Pro will let you record from multiple cameras at once -- so you'll be able to get footage from the front shooter right alongside rear cameras without taking multiple videos. And of course, the iPhone 11 Pro and Pro Max will sport all of the new features from the iPhone 11, like a night photography mode and slow-motion selfies (or, ugh, "slowfies"). The 12MP front camera is also getting a wider lens for photos, as well as wider FaceID sensing, allowing you to unlock your phone faster with your face. 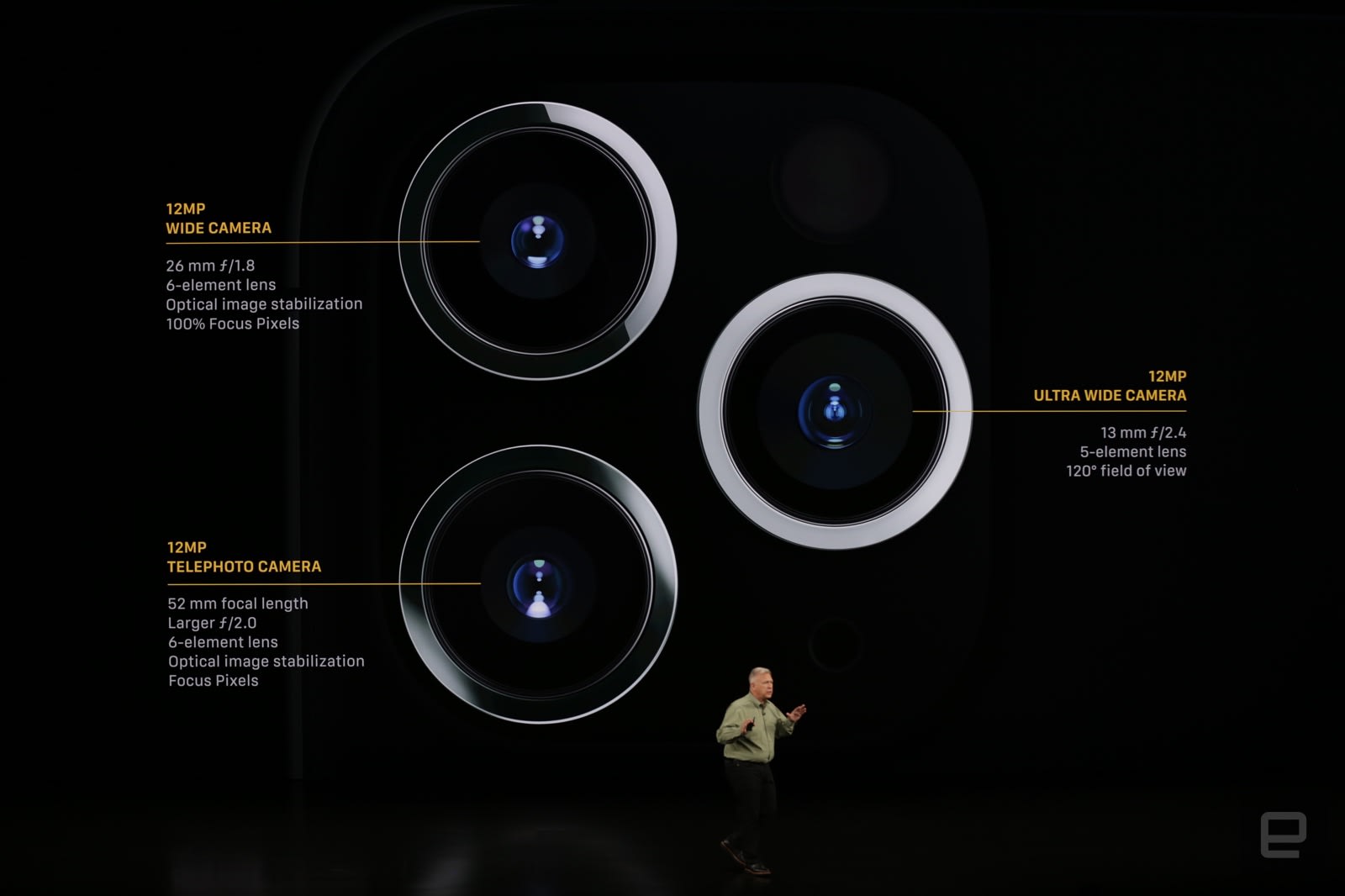 Aside from new midnight green and gold steel finishes, those cameras also make up the one major visual difference from last year's iPhones: a square camera hump. Your mileage might vary on that design choice, but it's not entirely surprising. We know the Pixel 4 will also get a square rear camera module, though from Google's renders, it looks to be less obtrusive than Apple's implementation. To my eyes, the camera hump detracts from the minimalist aesthetic Apple has been moving towards with the iPhone X and beyond. But all of those cameras have to live somewhere, right?

The iPhone 11 Pro and Pro Max are powered by Apple's new A13 Bionic processor, which are reportedly around 20 percent faster than the A12 when it comes to CPU and GPU speeds. They also feature a faster neural engine to analyze photos and videos in real-time, as well as Machine Learning Accelerators to help the CPU reach over a trillion operations per second. Just like last year, Apple is also using the exact same chip in the iPhone 11, which makes the "Pro" badge seem a bit less meaningful. Instead, the big Pro benefits are the triple camera system and some glorious new screens. 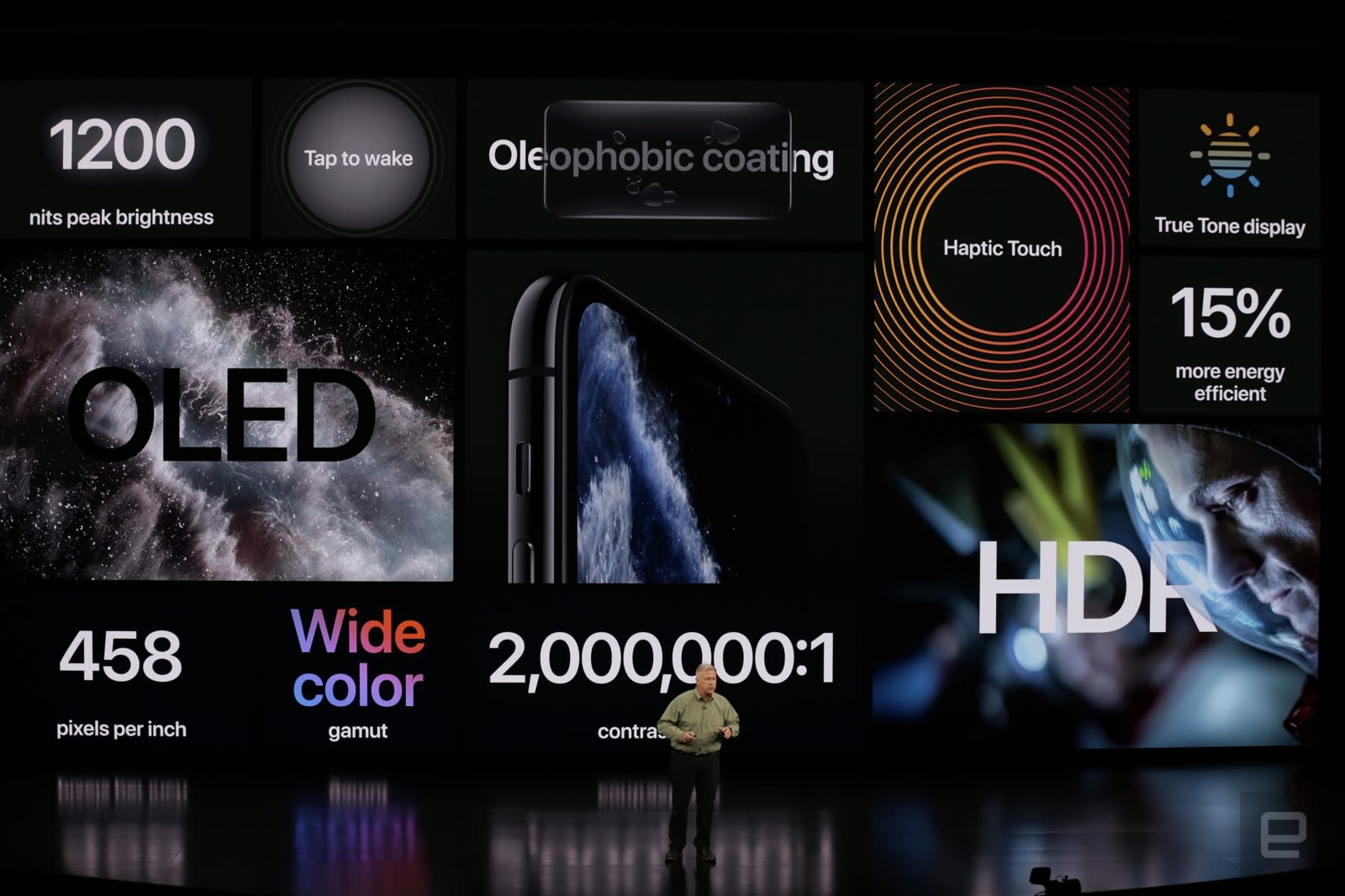 Both Pro phones feature "Super Retina" OLED screens with a 2,000,000:1 contrast ratio and up to 1,200 nits of brightness. And yes, their screen sizes remain the same as well: 5.8-inches for the iPhone 11 Pro, and 6.5-inches for the 11 Pro Max. The new displays are 15 percent more energy-efficient than before, according to Apple. They also feature 458 pixels per inch and still sport HDR and Dolby Vision compatibility. Basically, they seem like a nice step forward from the iPhone XS and XS Max OLED screens, and a notable upgrade from the iPhone 11's LCD.

Apple claims the iPhone 11 Pro will get four more hours of battery life than the XS, and the 11 Pro Max will get five hours more than the XS Max. We don't know if they have larger batteries, but the more efficient OLED screens are likely a big part of those battery gains. And I'd bet the A13 Bionic packs in its own efficiency improvements as well. Another plus? Apple is finally including an 18-watt faster charger in the box. Previously, you had to pick up a USB-C to Lightning cable to use on a MacBook adapter for faster iPhone charging.

Why get either Pro phone over the very capable iPhone 11? Like last year, it seems Apple is drawing a line between mainstream consumers, who would balk at paying $1,000 for a smartphone, and techies who want the latest gear no matter what. Apple is basically taking the same approach as it does to the MacBook and MacBook Pro, if the new iPhone Pro naming scheme didn't tip you off already.

All products recommended by Engadget are selected by our editorial team, independent of our parent company. Some of our stories include affiliate links. If you buy something through one of these links, we may earn an affiliate commission. All prices are correct at the time of publishing.
View All Comments
Apple reveals the powerful new iPhone 11 Pro and Pro Max