Byton has hit a big milestone in the chase for its own Tesla-like EV dream by unveiling the final design for its M-Byte SUV. With a futuristic 48-inch display and multiple control screens, it has changed surprisingly little from the concept it first showed at CES 2018. On the exterior, the sleek EV certainly looks like it could compete with any modern SUV, including Tesla's Model X, especially considering that Byton is aiming for a starting price of $45,000.

All of that looks positive, but Byton still has a perilous route towards consumer success. Many highly touted vehicles with similar provenances, like Faraday Future's FF91, have suffered severe setbacks on the road to production. Even Tesla with all its experience had a very rocky ramp-up with the Model 3. To find how Byton plans to make the transition from feisty startup to valid auto option -- especially given the futuristic interior design -- I spoke to the design team at the Frankfurt Motor Show.

The M-Byte's specs are largely unchanged since we first saw the vehicle. It will come in a 72 kWh version that will deliver 224 miles of WLPT range (less on the EPA scale) while delivering power via a 270 HP rear electric motor. The all-wheel-drive version, meanwhile, will pack a 95 kWh battery and dual front/rear motors that will kick out 402 horsepower with a 270-mile WLPT range.

But back to the final design of Byton's unconventional interior. Looking at the visually imposing 48-inch screen and all the other tech, it's hard to believe that it's going into production, but Byton vowed it would happen.

"All of that is a massive software undertaking, so we don't want to appear overconfident; we have a hell of a lot of work ahead of us," Byton's new CTO David Twohig told Engadget. "We don't plan to launch the vehicle without those features, and we won't do so until we're confident that it's ready."

Andre Nitze-Nelson, Head of Global Digital Product Design, walked me through an impressive demo of the massive curved console and control screens. Visually, it's pretty overwhelming, so Byton has divided it into three sections. In the left third, the driver will see the digital equivalent of an instrument cluster, showing speeds, fuel levels, turn signal indicators and so on. There's also a visualization of the driver-assist system (which Byton refers to as "level 2-plus"), showing which lane you're in and other pertinent details. 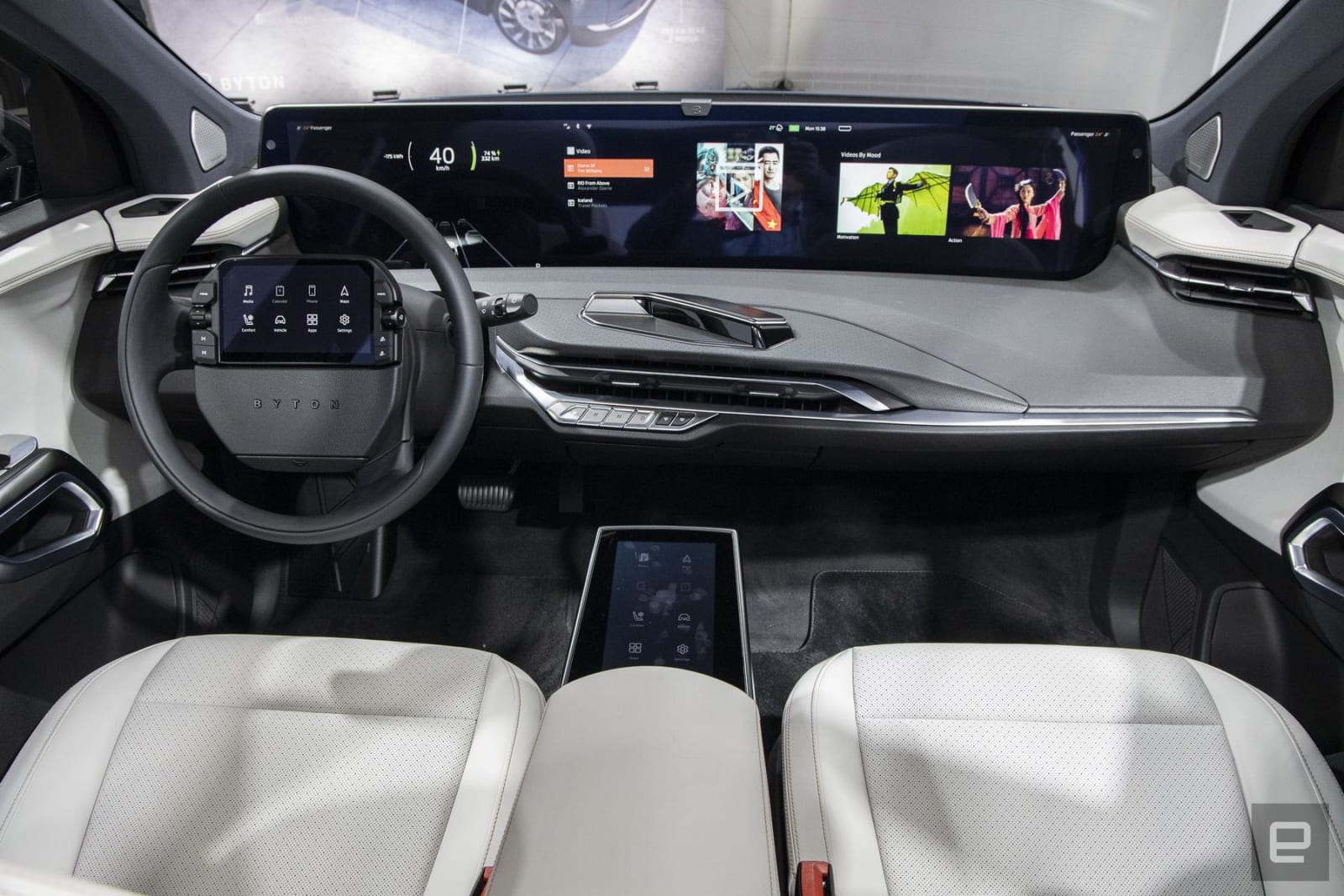 The middle screen will either display mapping and other data, or show infotainment content to other passengers, depending on what the driver decides. The right panel is designed for the front passenger to control entertainment, climate and other options. When the car is at rest, the entire panel can become a giant movie screen, and the car will even dim the lights for the optimal cinema experience.

With cameras mounted at the front and in optional rear tablets, the system cannot only figure out how many passengers are in the car but who they are via a facial recognition system. That'll allow it to customize not only your seat position, but music playlists and other infotainment.

I wondered how drivers would avoid being distracted by all this tech, but Byton has even thought of that. "We did an eye-tracking test, and you can see that people are really paying attention to the road," said Nitze-Nelson. "This screen basically disappears, because it looks like a white paper." 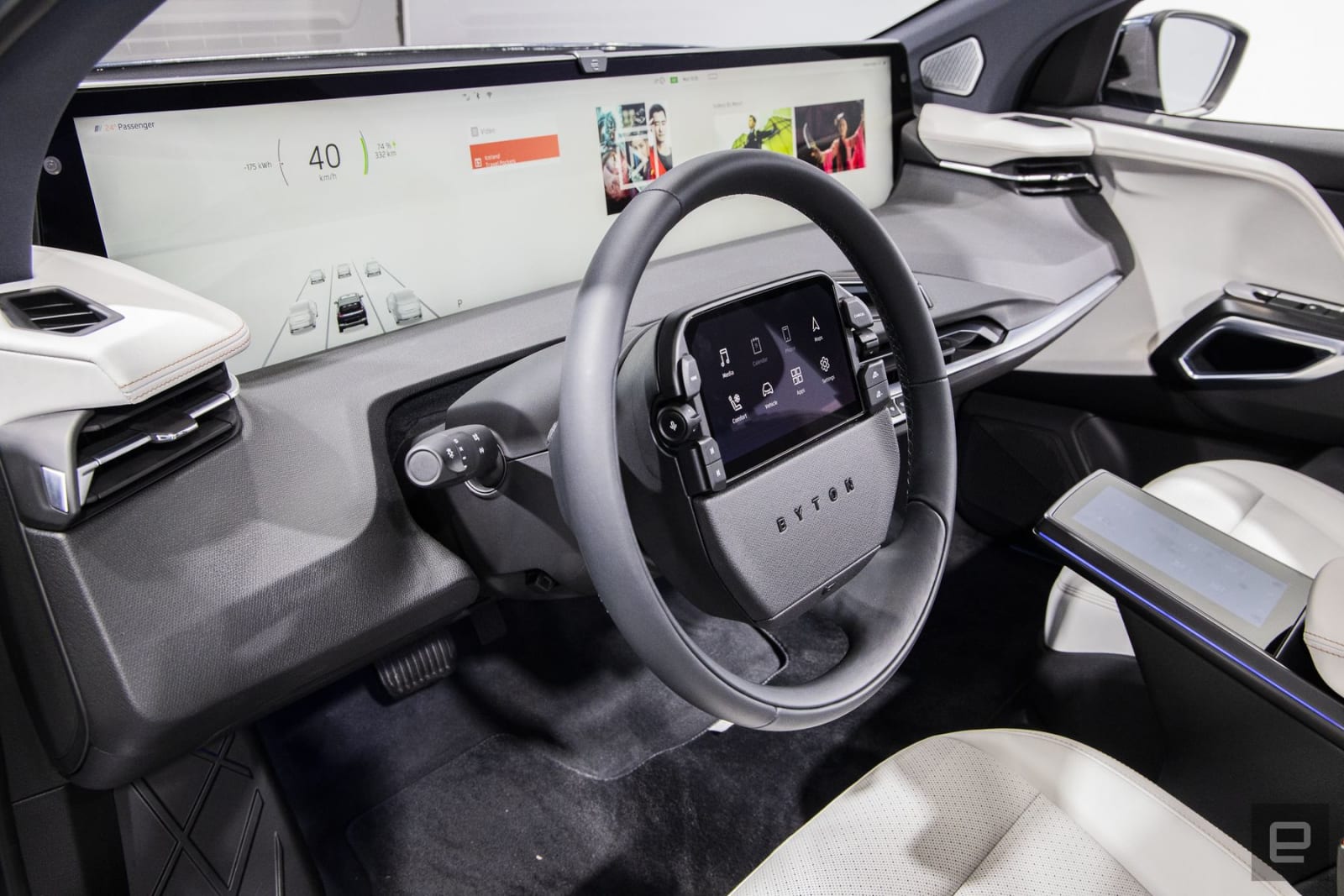 I could go on about the other tech, like the motorized tilting and telescoping steering wheel, rotating seats, 3D virtual parking and more. However, a skeptical voice kept telling me that this stuff will never appear in the final car, that Byton had bitten off more than it could chew. It's hard enough for a startup to launch an EV into production, let alone do so with so much concept-like tech that has never appeared in any production car.

Byton thinks it will be able to pull it off by manufacturing the vehicle in China. It expects to start delivering the M-Byte to Chinese customers by the middle of 2020. Pre-orders will start, from European and North American customers, toward the end of 2020, for deliveries by 2021.

While Byton has avoided much of the drama seen by its Chinese EV rival Faraday Future, its launch hasn't been problem free. The company has reportedly had financial issues, and its co-founder and former CEO Carsten Breitfeld (who helped develop BMW's i8) left the company earlier this year. Breitfeld has since landed as the CEO at Byton's rival Faraday Future.

And it has to spend a lot of money before it can sell the first car. Byton said that it's close to securing another $500 million in investments, on top of the hundreds of millions it has already spent. Twohig has also admitted that the current trade war between China and the US could impact its US plans. "We hope and believe that the US and China will realize that they need each other," said Nitze-Nelson. "We have contingency plans, and one of the advantages of being a new player without any legacy is that we can move reasonably quickly."

The M-Byte wowed me with one of the most impressive tech demos I've seen in any car. I sincerely hope that Byton can produce the M-Byte in its current form and at the projected $45,000 price. I'm even willing to give it an extra year or two leeway on deliveries.

However, I can't help but feel that the company would've stood a better chance with a simpler, easier-to-produce design. Still, a part of me likes the fact that they're going for broke by trying to deliver a concept car to the masses.