Stellar sound and comfort are offset by several compromises.

Sennheiser's Momentum line has been a popular headphone choice for years now. It first debuted in 2012, then went wireless in 2015. Despite stumbling out of the gate with some connectivity issues, the Momentum Wireless is still a solid choice. At IFA 2019, the company debuted the third generation of the headphones. And while this new $399.95 over-ear model is improved, there are still some headaches that could've been avoided.

The new Momentum Wireless has a similar design to previous entries in the series. It still has the metal headband that allows the earcups themselves to slide up and down to adjust the fit. The headband now has slightly more padding underneath, and the textured look on top is now a smooth surface. Earpads are still thick and cushiony, which were comfy for a long flight over the Atlantic and through several hours of continuous use. Visible cables from the earcups to the headband are still there and the headphones still fold inward for easy storage.

In fact, that folding motion is actually how you turn them on and off, there's no actual button. To turn the headphones on, you simply unfold them and when you're done, just fold them up and they'll turn off. It sounds simple, but it does take some getting used to. 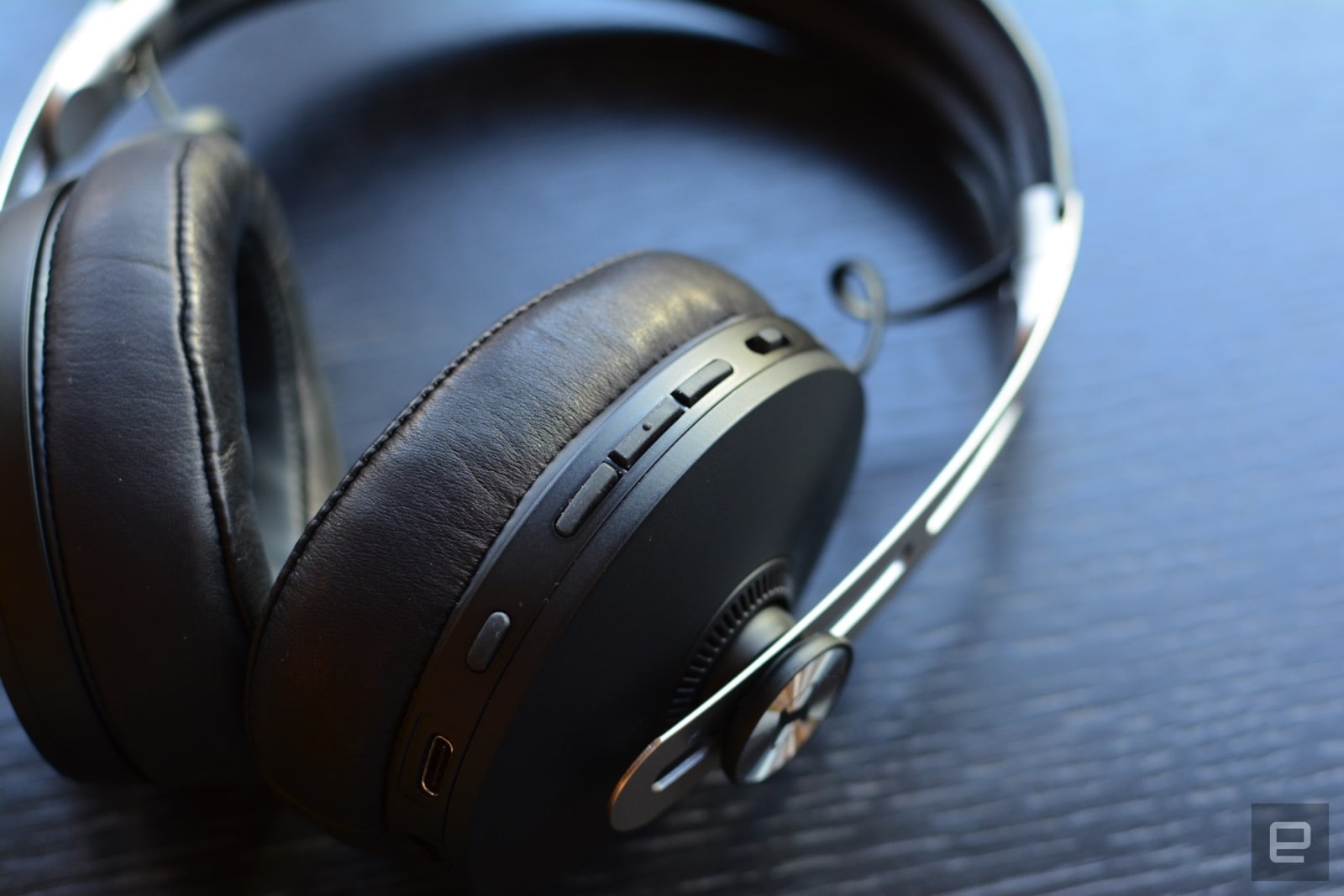 On-board controls aren't completely gone though. There are still physical buttons for volume, "music" and a dedicated button for voice assistant (Siri, Google Assistant, etc.). That music control is a multifunction button for play/pause (press once), skipping to the next track (press twice) and returning the previous track (press three times). Touch controls are all the rage these days, but unless a company nails them, they can be frustrating and unreliable. That's clearly not a concern here. There's also a physical control for active noise cancellation (ANC), where you can turn it off or opt for Transparent Hearing mode. 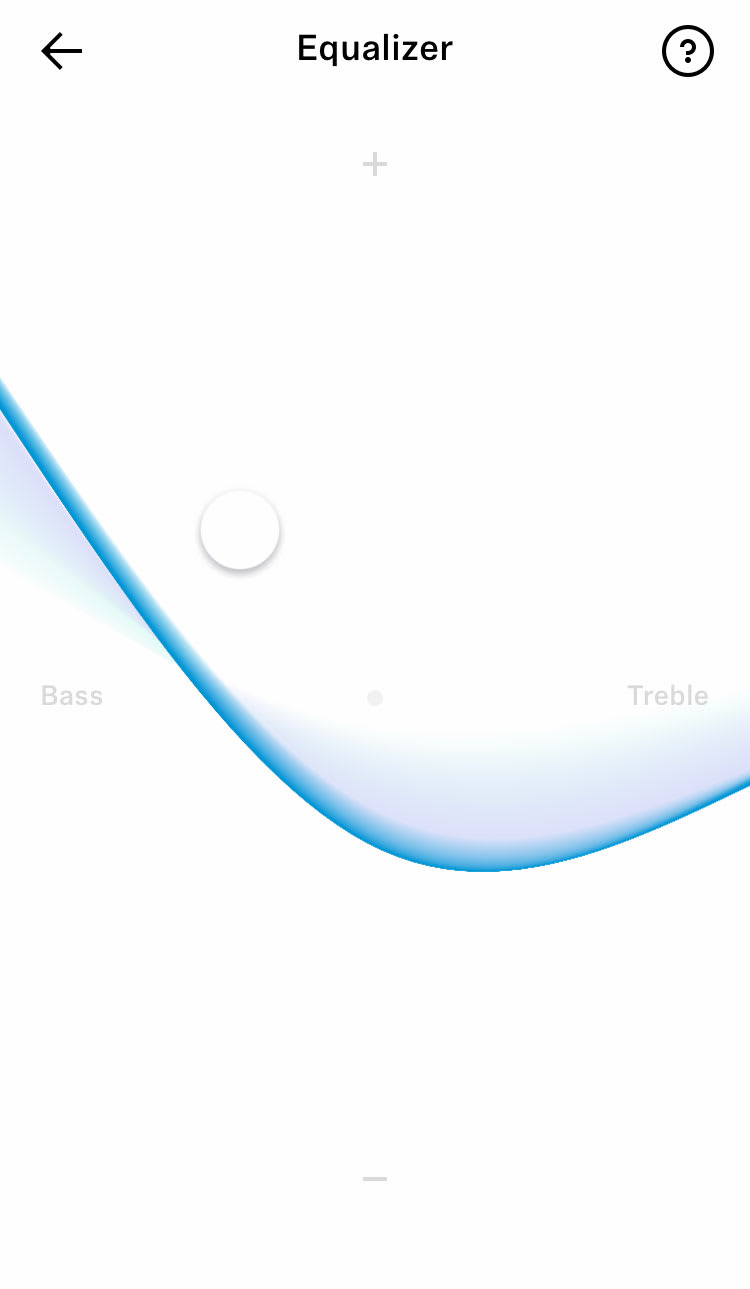 The EQ inside the Smart Control app

Further adjustments can be made with the Sennheiser Smart Control app. You can switch between maximum ANC, anti-wind or anti-pressure settings. The software will also allow you to make EQ tweaks by swiping to manipulate a wave that has bass, mids and treble from left to right. Basically, wherever you swipe up or down on the curve is where the adjustment is made, and the rest of it automatically reacts -- whether you want it to or not. It isn't an exact science, and it can be difficult to make the subtle changes you might be after since you can't adjust those three parameters individually. But changing things up here definitely makes a noticeable difference, which isn't always the case with these headphone companion apps. Honestly, I found the default tuning to be my favorite no matter where I put the EQ curve in the app.

Those ANC modes help, but in my opinion the noise cancellation on the new Momentum Wireless isn't as good as what Sony and Bose offer. The anti-pressure setting was actually much better on a flight than the "max" ANC setting, but I could still hear some background noise. That's not the case on the Sony WH-1000XM3 or the Bose QC35 II and the Bose 700. What Sennheiser offers here is good enough for a lot of environments, but it won't block out everything. For $50 more than those incredible Sony headphones, you expect the Momentum Wireless to at least be on par in terms of ANC performance. Sadly, that wasn't the case.

Even though Sennheiser sometimes has trouble putting together a complete package, the company almost always nails the sound quality of its headphones. I'm happy to report the streak continues here. The Momentum Wireless has a nice, warm tone and a stellar clarity where even the subtlest notes and noises are clearly heard. Across a range of genres, snare and kick drums are punchy instead of muffled and muted, and overall, the sound has an immersive quality -- it's not just flat, compressed noise being blasted into your ears.

This is evident on Tool's Fear Inoculum. On "Pneuma," in particular, grungy prog-metal guitar riffs envelope you, but the drums retain their punch just underneath and a driving bass line has plenty of depth. The spatial quality is also apparent on The Appleseed Cast's The Fleeting Light of Impermanence. With songs like "Time The Destroyer," droning synths and keyboards create a soundscape with a sense of space and dimension that the Momentum Wireless handles very well. When the strings come in over the top for another layer, and the drums, guitars and vocals all pick up steam a few minutes in, the headphones handle the intricate indie rock ambience admirably. No, we're not talking Ambeo levels of immersion here, but it's still quite good. 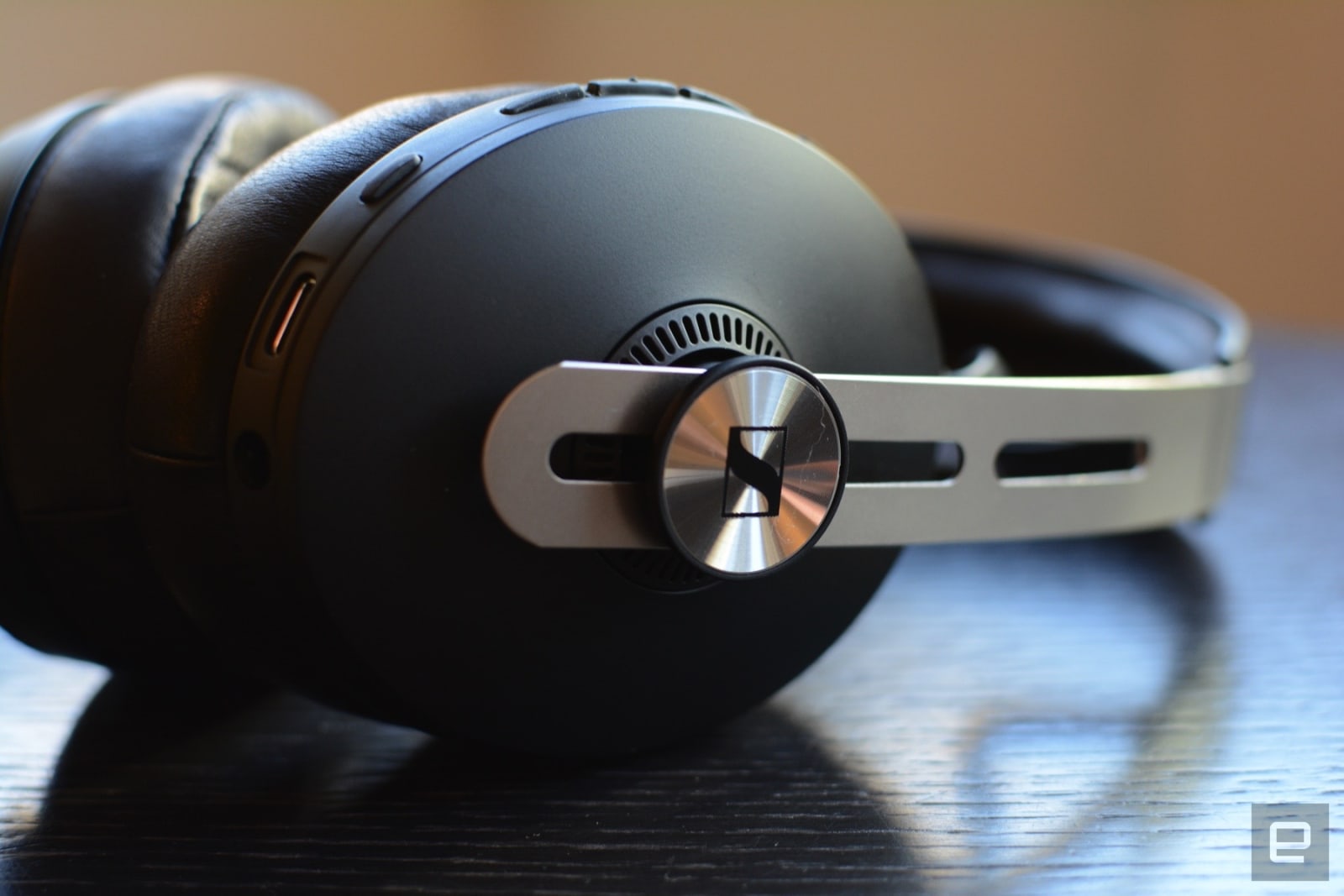 If bass heavy genres are more your style, the Momentum Wireless does a solid job with those too. There's tons of thump in the bass line to Phantogram's "Mister Impossible" that doesn't overpower or become muddy. Even that kick drum itself has some dimension to it, complimenting the bass guitar perfectly.

With noise-cancelling headphones in 2019, somewhere around 30 hours is the mark most companies have set for battery life. Some manage to eek out more, and some offer slightly less. Sennheiser only promises 17 hours, a little over half of what Sony offers on the WH-1000XM3. Again, that's a major disappointment for a set of headphones that cost $50 more. I could've lived with 25 hours, but just 17 is a bit of a head scratcher. That being said, I used these on the flight back from IFA in Berlin (around nine hours) and for a few days after (one to two hours at a time) before I needed to plug in. A quick-charge feature gives you 1.5 hours of battery in 10 minutes when you can't wait three hours for a full tank.

The Momentum Wireless also packs in Tile object tracking. With the Tile app, you can hunt for where you left your headphones if you forget. We've seen this from other companies before, and I'm sure it will be useful for some people. However, I think it would be much better served for things that are easier to lose -- like true wireless earbuds.

While there's a lot to like here, the Sony WH-1000XM3 and the Bose 700 remain my top two noise-cancelling headphones picks right now. The WH-1000XM3 is $50 cheaper (at $348) than the Momentum Wireless and outperforms it at every turn. The 700's ANC chops are better than Sennheiser's at the same price ($399). Despite sounding good and being super comfortable, it's hard to recommend these over the current best from Sony, especially with the difference in cost.

All products recommended by Engadget are selected by our editorial team, independent of our parent company. Some of our stories include affiliate links. If you buy something through one of these links, we may earn an affiliate commission. All prices are correct at the time of publishing.
View All Comments
Sennheiser Momentum Wireless review