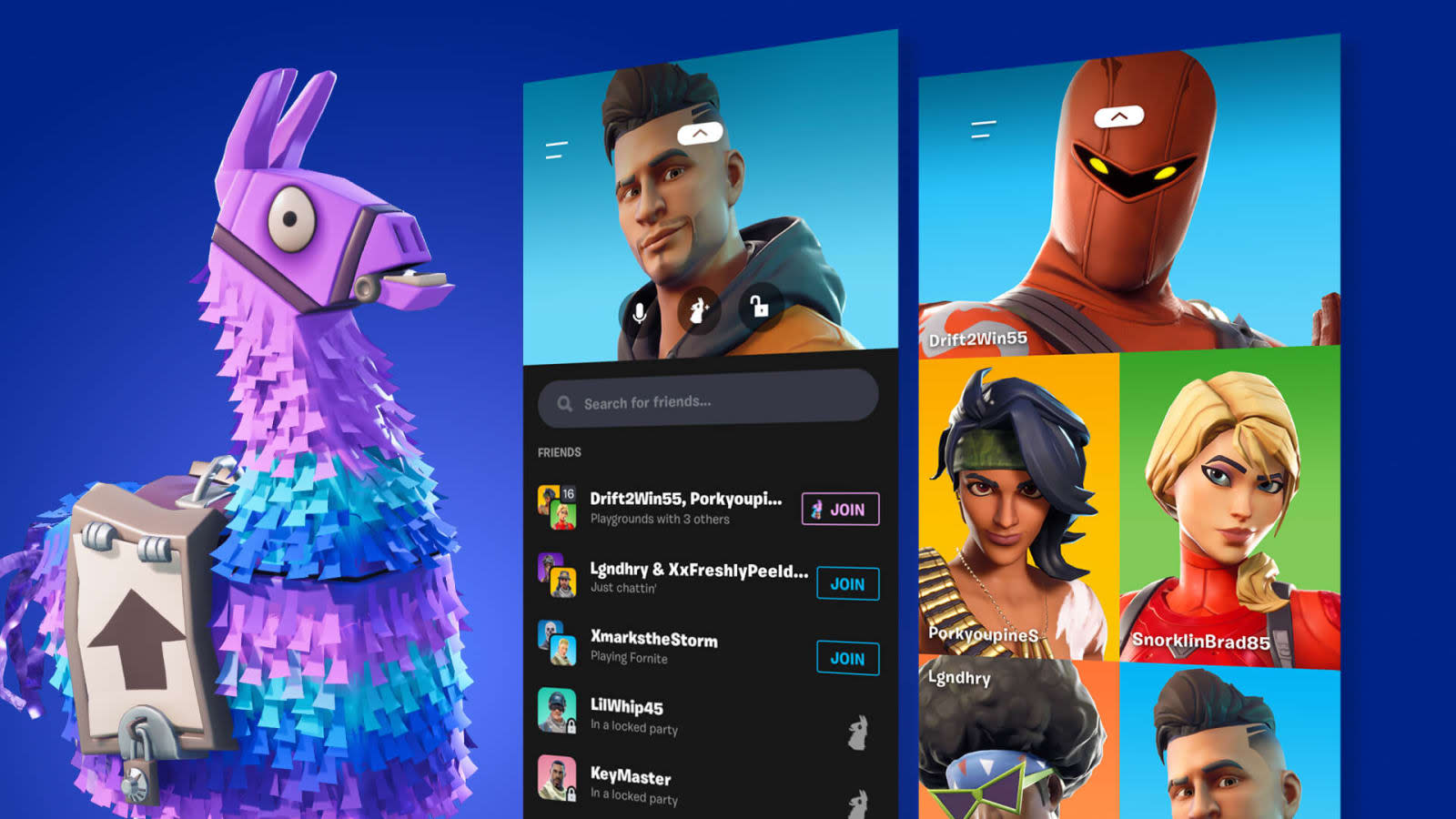 Fortnite recently united players with updates that everyone hated equally, but today it unveiled an app that will literally bring players together. Party Hub is an all-new cross-platform voice chat app that lets players socialize even when they're not playing the game. It's based on technology from Houseparty, the group video chat app that Epic Games acquired in June.

According to the Fortnite team, Party Hub is a new feature "that lets you see which friends are online, start a party, and voice chat with that party before jumping in game on any platform or downloading the game on your mobile device."

To use it, you'll need the latest Fortnite mobile version. When you open the app, the main screen will look different -- the top of the screen has a button to jump in-game, while the bottom will take you to the Party Hub before you go in-game. Fortnite notes that you can prevent people from joining your party by putting a lock item on your avatar, or invite folks by ringing the llama bells.

Party Hub creates new possibilities for syncing up with your squad and staying in touch with friends, and right now we're just scratching the surface of what's possible.

From Party Hub, you can jump directly into a game and play it with everyone from your chat. To switch from the chat app to a console game, you simply launch Fortnite on that platform with the mobile app open. At that point, "your party and voice chat will transfer to the game," said Epic. Party Hub only runs on mobile and not on a console or PC, but you can transfer Fortnite chats from console over to your mobile device.

Considering that Epic Games only purchased Houseparty three months ago, the integration with Fortnite seems pretty smart. While it can be used as a standalone messaging app, Fortnite has made it pretty easy to jump directly from a casual chat into the game.

Fortnite was already like a mini social network in itself. "Games can be a foundation for socially connected community in a way that is different from some of the other platforms that are out there, that are increasingly too political or controversial," said Epic studio director and Houseparty CEO Sima Sistani.

Now, Epic has made it more formal, and said that the first version of the app is just a start. "Party Hub creates new possibilities for syncing up with your squad and staying in touch with friends, and right now we're just scratching the surface of what's possible."

In this article: av, cross-platform, EpicGames, Fortnite, gaming, GroupChat, Houseparty, PartyHub
All products recommended by Engadget are selected by our editorial team, independent of our parent company. Some of our stories include affiliate links. If you buy something through one of these links, we may earn an affiliate commission.