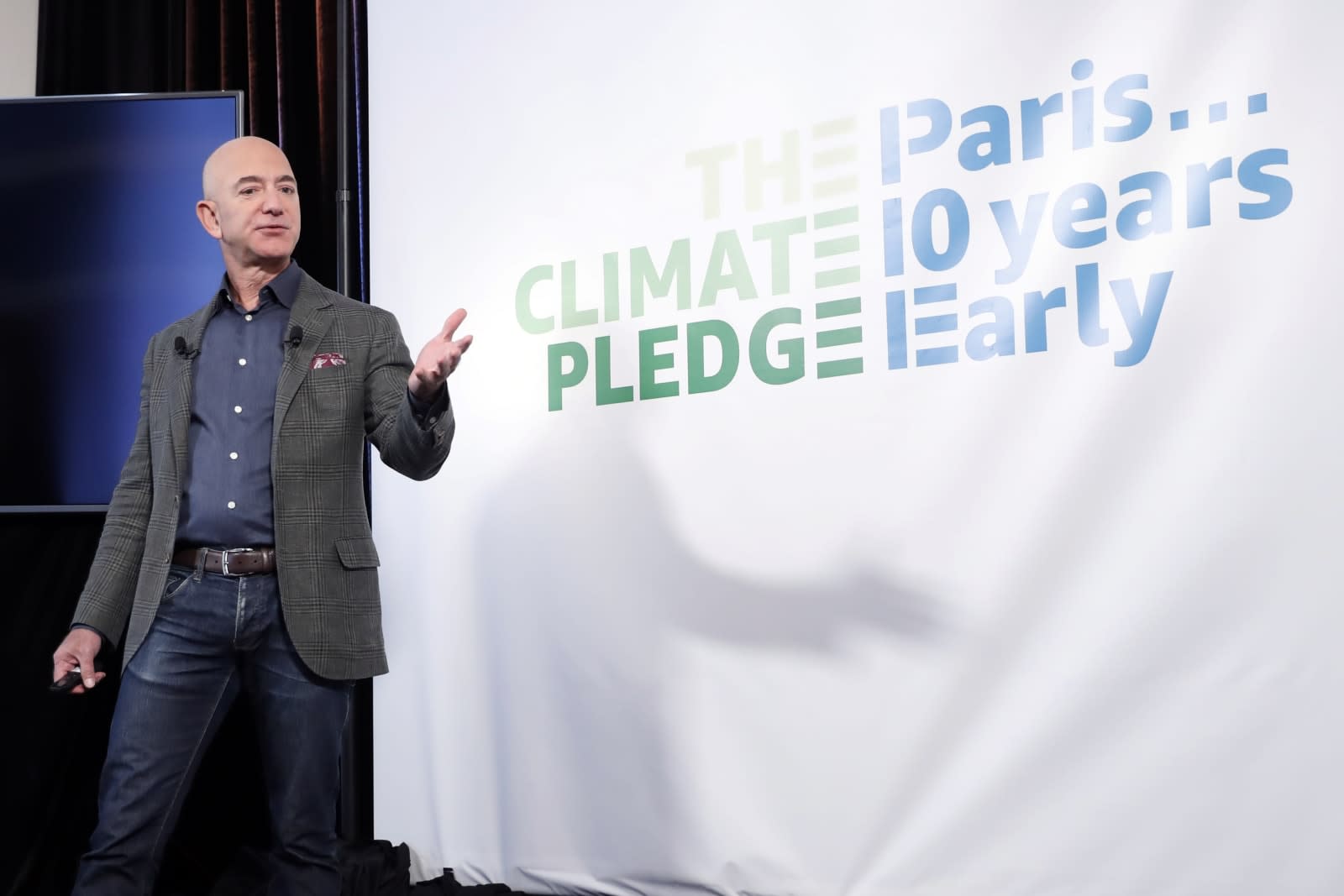 Jeff Bezos has announced Amazon will sign up to a climate pledge with the aim of meeting the United Nations Paris Agreement climate goals 10 years early. He said Amazon will hit emission reduction targets by 2040, report its emissions regularly and implement decarbonization strategies. The company will balance out any remaining emissions with carbon offsets. Bezos wants 80 percent of Amazon's energy use to come from renewable sources by 2024, and for it to rely fully on renewable energy by 2030.

Among the measures Amazon plans to take towards these goals is purchasing 100,000 electric delivery vans from Rivian. It led a $700 million investment round in the vehicle manufacturer earlier this year, contributing $440 million of that total. Amazon expects the first vans will be deployed by 2021, 10,000 by 2024 and all 100,000 by 2030. He also announced a $100 million reforestation effort with the Nature Conservancy.

The Amazon CEO announced the plan at a National Press Club in Washington DC Thursday. "It's really something that can only be done in collaboration with other large companies because we're all part of each other's supply chains," he said, according to CNET. Bezos noted Amazon will work with its supply chain companies to help them reach the same carbon goals.

"If a company with as much physical infrastructure as Amazon -- which delivers more than 10 billion items a year -- can meet the Paris Agreement 10 years early, then any company can," he said in a statement. "I've been talking with other CEOs of global companies, and I'm finding a lot of interest in joining the pledge.

Super excited about The Climate Pledge. Impossible to do this without @CFigueres. So grateful to you, Christiana. #ClimatePledge #Paris10YearsEarly pic.twitter.com/E9hkaLat5V

The company has built a carbon accounting system that pulls data from across its empire. "Amazon is as complex as many companies combined," Dara O'Rourke, a scientist with the company's sustainability team, told CNBC. "That forced us to build one of the most sophisticated carbon accounting systems in the world. We had to build a system that had the granular data, but at an Amazon scale."

The pledge comes under mounting pressure from Amazon employees to take action on climate change. Earlier this year, thousands of them submitted a proposal to Amazon's annual shareholder meeting urging Bezos to put together a climate change plan. Shareholders shot down the proposal.

Meanwhile, more than 1,500 workers, many of whom work at Amazon's HQ in Seattle, are set to join the global climate strike on September 20th. They're demanding the company stop donating to lobbyists and politicians who deny climate change, that it stops working on fossil fuel extraction with oil and gas companies and that it reduces carbon emissions to zero by 2030.

While Amazon is working towards the latter goal, Bezos noted at Thursday's event the company will keep working with oil and gas companies. He said those businesses should have access to the best available tools while they attempt to transition to more sustainable approaches. He also said Amazon would determine if it's contributing to "climate deniers" through a review of its political donations.

Amazon has previously announced other efforts aimed at reducing its emissions. In February, it revealed a Shipment Zero plan to make half of its shipments carbon neutral by 2030 with a view to eventually making all deliveries carbon neutral. The company also has a network of solar and wind farms.

In this article: amazon, climate change, climatechange, deliveries, electric vehicle, electricvehicle, ev, gear, green, jeff bezos, jeffbezos, paris agreement, parisagreement, rivian
All products recommended by Engadget are selected by our editorial team, independent of our parent company. Some of our stories include affiliate links. If you buy something through one of these links, we may earn an affiliate commission.