Turns out, it tastes pretty good.

Since its debut three years ago, the only way to consume the Impossible Burger has been to find a restaurant that serves it. Over the years, Impossible has expanded its footprint from high-end joints in New York and San Francisco to nationwide fast-food establishments like White Castle and Burger King. Beginning today, however, it's available in grocery stores too, starting with Gelson's Markets in Southern California. I decided to try it out for myself, and compare it to a rival vegan meat product as well.

When I first saw the 12-ounce Impossible Burger package of raw faux beef, I was amazed at just how red and meat-like it looked. Beyond Meat, a brand that's been selling vegan meat alternatives in grocery stores for a number of years now, sells a similar 16-ounce package of Beyond Beef, but it isn't red or bloody at all. In fact, it's a brownish gray, which doesn't look as appetizing. Impossible's raw "meat" has no discernable scent, similar to fresh meat, while raw Beyond Beef, on the other hand, has a rather off-odor, almost that of slightly rotten produce. I was a little put off by that.

Texture-wise, the Impossible Burger's consistency is not quite as soft and smooth as the real deal. I felt tiny cubes of what I presume is some sort of coconut oil concoction spread throughout the "meat." But I was able to form loosely-packed quarter-pound patties exactly the same as I would with freshly ground beef. The Beyond Beef, however, was a little more paste-like and not quite as airy, and the resulting patty was a little denser. 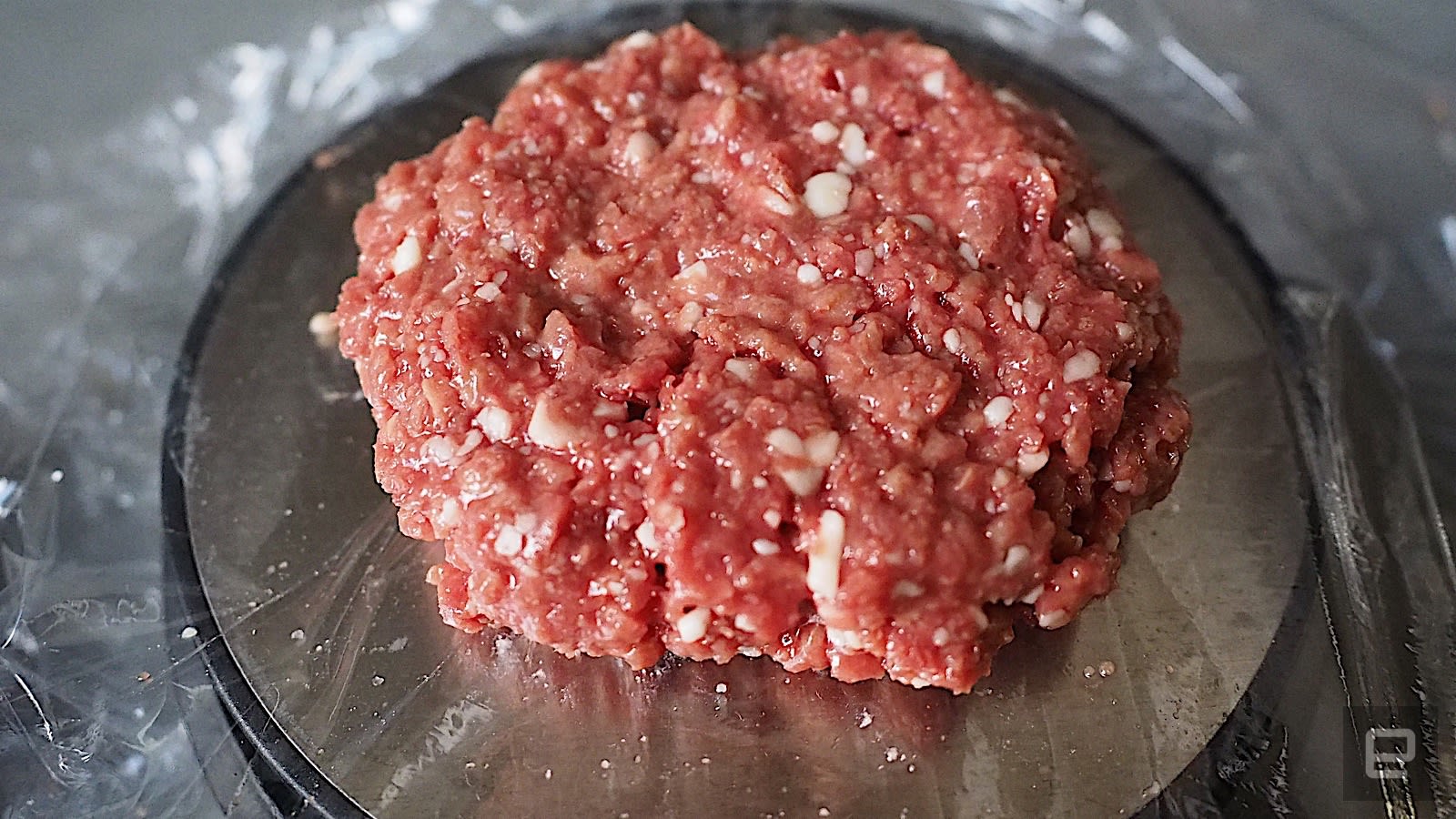 Next came the actual cooking. First I sprinkled salt and pepper on both sides of the patties, then I put a cast iron pan with a bit of oil in it over a medium-high flame, and let it heat up for a few minutes. I then placed the patties in the pan one at a time, cooking them for about five minutes each, flipping halfway through. Patties from both Impossible Burger and Beyond Beef sizzled fiercely and got that deep brown crust that's synonymous with a well-cooked burger.

Yet, the end results were pretty different. While the cooked Impossible Burger patty looked practically identical to a real beef patty -- there's even a slight pink in the middle -- the Beyond Beef burger took on a deep red hue that seemed a little unnatural.

And then there's the taste. There's really no contest here. The Beyond Beef patty doesn't really taste that much like meat; it's more like a slightly upgraded version of a Boca burger. Together with a bun, toppings and sauce, it's not too bad, but it doesn't compare to the Impossible. As I was eating the Impossible Burger, I actually exclaimed out loud in my kitchen several times on just how bleeping delicious it was (except replace "bleeping" with an actual curse word). It was crispy with a lovely soft chew that I found very satisfying. Add the usual burger fixings with it, and it is absolutely scrumptious. No, it isn't quite as juicy as a real burger, and it doesn't taste exactly like meat, but the Impossible Burger comes really close to the real deal.

Not to toot my own horn (OK, maybe a little), but I also think my homemade Impossible Burger actually compares well to the restaurant ones I've had. I think it's about on par with the one from Umami Burger, and it's definitely better than the Impossible Whopper and the White Castle sliders (those lacked the crispy crust I like). Of course, the beauty of home cooking is that I'm able to adjust the seasoning, size and doneness of the burgers to my personal preference.

The Impossible Burger isn't for everyone, though. It uses soy protein, which might be a concern if you're allergic to that. Although Impossible has faced some backlash for using GMO ingredients that contain the pesticide glyphosate, the FDA has approved all of its ingredients as safe, and the US Environmental Protection Agency has said low levels of glyphosate aren't likely to be carcinogenic. Impossible Foods claims that the amount of glyphosate found in each burger is far below the risk threshold. 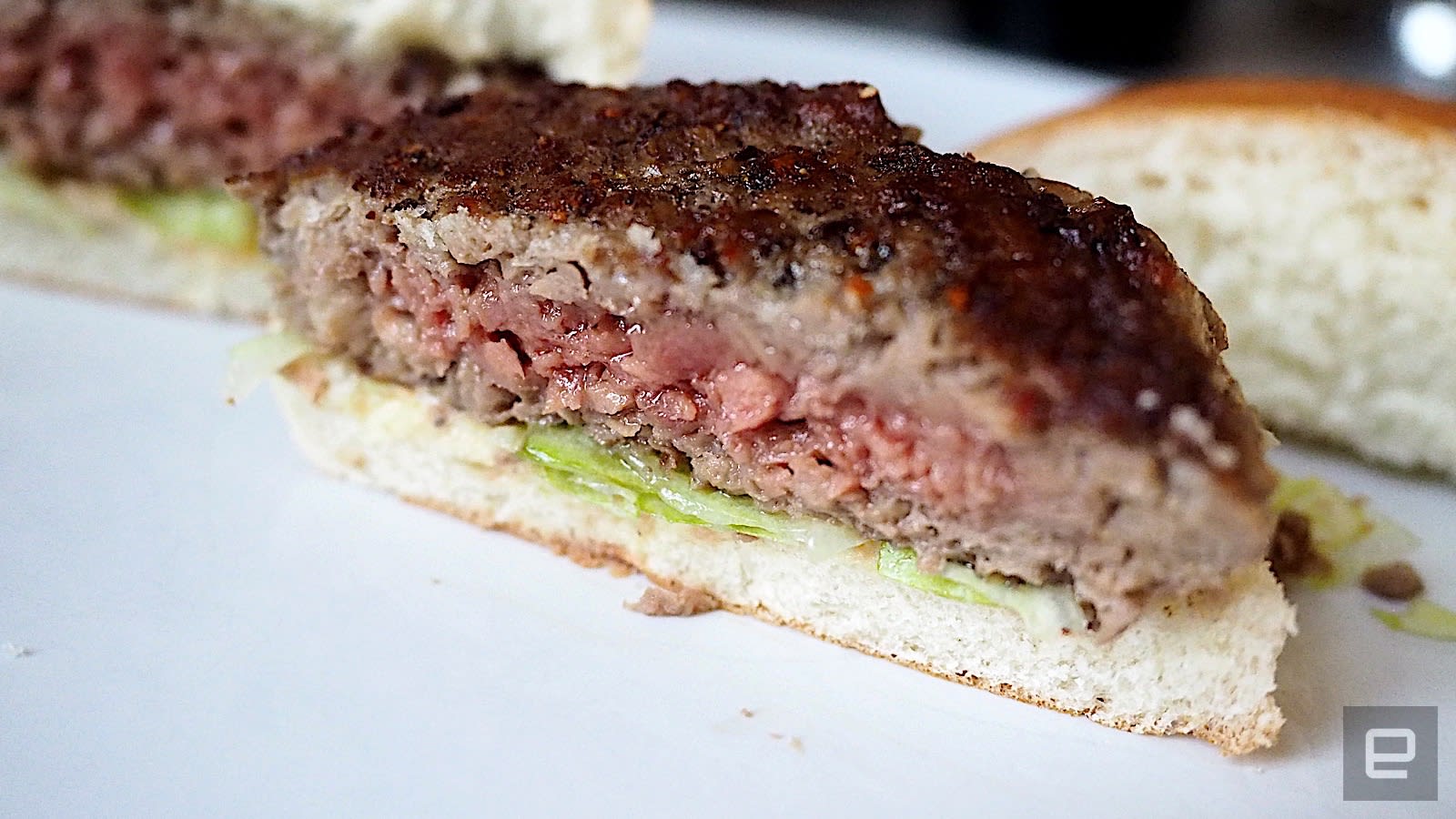 It's also on the pricier side compared to beef. That aforementioned 12-ounce package is $8.99, which adds up to about $0.75 per ounce. That's just a little bit more than the $9.99 16-ounce Beyond Beef at around $0.625 per ounce. Of course, beef can often be found for less than half that price depending on the quality and where you live. Making your own veggie burger with beans or lentils might end up being cheaper as well.

But a homemade Impossible Burger is still cheaper than having one made in a restaurant. The $8.99 package works out to $3 per quarter-pound burger, which is a deal compared to the $6 Impossible Whopper, and an absolute steal compared to the double-digit prices found at some restaurants (Umami charges $16 for its version, which admittedly uses two patties rather than one).

For someone looking to cut down their meat consumption for environmental reasons, the Impossible Burger is a wonderful option, and I like that it's finally available in grocery stores so I can cook it the way I want. I can't wait to see how it fares in dumplings and quick pasta sauces. Yes, it's more expensive than meat, so I probably won't have it all the time. But for the occasional meat-free meal at home, it's a compelling alternative.

All products recommended by Engadget are selected by our editorial team, independent of our parent company. Some of our stories include affiliate links. If you buy something through one of these links, we may earn an affiliate commission. All prices are correct at the time of publishing.
View All Comments
What's it like cooking your own Impossible Burger?