The OnePlus 7T offers a high-speed HDR display for $599

But the company’s lineup of phones is getting quite confusing.

OnePlus doesn't want its fans to have to wait a year for a phone with the most advanced chipset available. So in 2016 it started launching new flagships about every six months. Beginning with the OnePlus 3T, the company began doing sort of mid-cycle upgrades, or "T" variants each year. Then with the OnePlus 7, the company introduced a "Pro" version, offering a higher-end device for those willing to pay a bit more. Things got even more confusing when OnePlus got ready to launch the T-versions. For one, there's no Pro version. At least not yet. Instead we're only getting a OnePlus 7T. And weirdly, it gains some features once exclusive to the 7 Pro. It even packs a more powerful processor, but sticks with a lower res screen.

Maybe everything will make more sense if and when the company unveils the OnePlus 7T Pro (rumors suggest it will be announced in October). But for now, I'm going to compare the OnePlus 7T to the 7, which we never got stateside. The good news is that the 7T is coming to the US through T-Mobile, and it'll cost $599 for the 8GB RAM plus 128GB UFS 3.0 storage combination.

That's roughly the same price as the earlier model (currency conversion differences notwithstanding), and the OnePlus 7T offers quite a few upgrades. It has a slightly bigger 6.55-inch display with a 2,400 x 1,080 resolution, plus it inherits the 90Hz refresh rate and HDR10+ support from the 7 Pro. I was impressed at how colorful and crisp episodes of The Good Place looked on the OnePlus 7T, and scrolling up and down on Engadget's home page was smooth. This is a very good screen for the price.

OnePlus also reduced the amount of blue light put out by this panel to lessen eye strain. During my brief time with the phone, I didn't notice much of a change in how tired I felt, but the color temperature difference between the OnePlus 7T and my Pixel 3 was obvious. The OnePlus screen was a little more green at the default color settings. I did prefer the OnePlus 7T's display in sunlight, though. It can hit up to 1,000 nits of brightness, which made reading under harsh light actually possible.

The 7T also features a triple camera setup. Where the previous phone had a 48-megapixel main sensor and 5-megapixel companion, the new handset has a 48-megapixel primary shooter, a 12-megapixel telephoto and a 16-megapixel ultra-wide option. These are housed in a circle on the phone's back. I never really minded the vertical strip from before, and I don't have strong feelings about the new look either. The round housing does make the phone look more like a camera from behind, though. 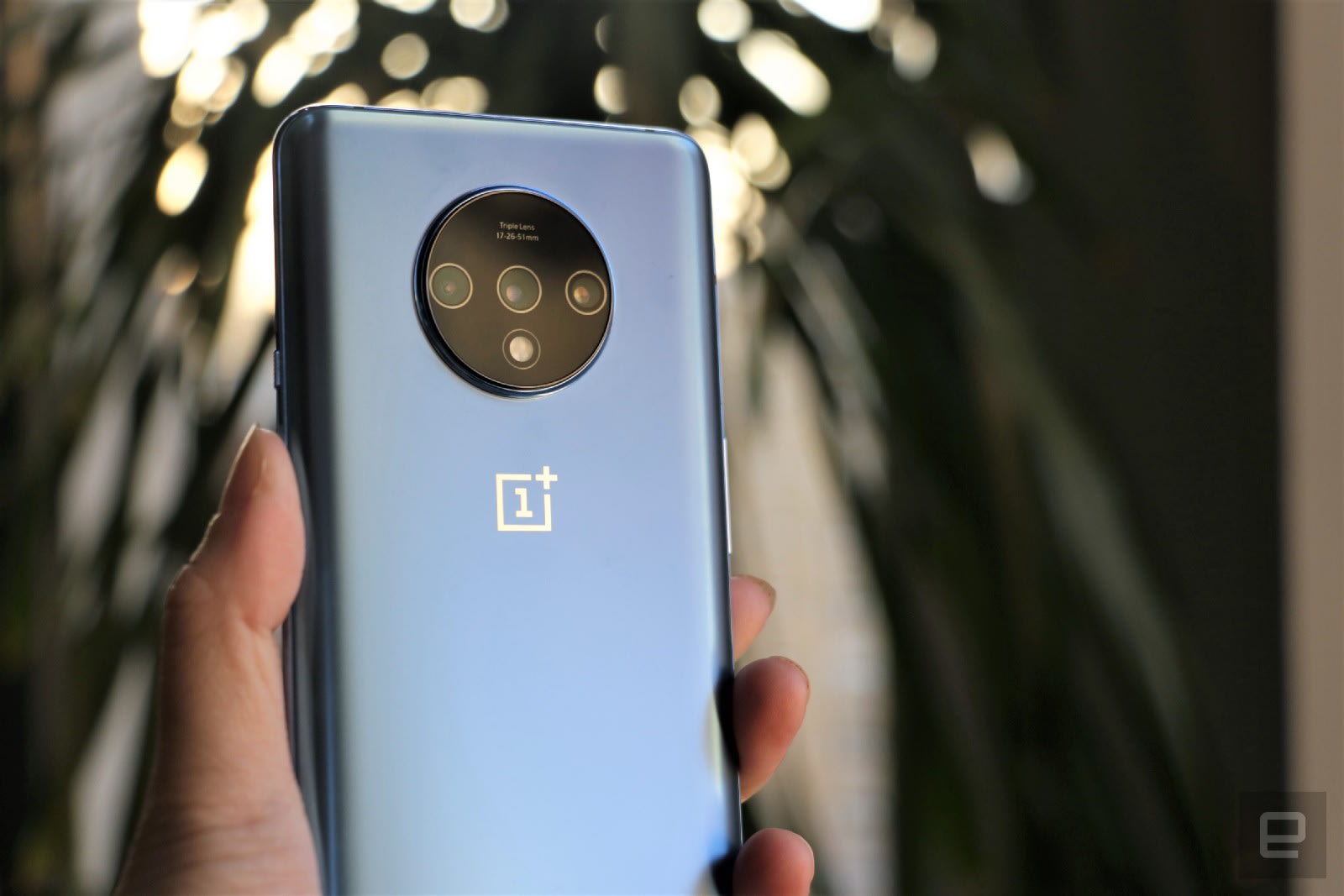 A three-camera setup is pretty standard for flagships by now. But for a phone that costs less than $600, the OnePlus 7T offers pretty good image quality. OnePlus also added a new Super Macro mode here that lets you get as close as 2.5cm from a subject and still get crisp shots. I had fun testing this out by sticking my review unit on a high-pile rug and getting an almost microscope-like effect from the pictures. I was able to get about 3cm away from words in a book, by my unscientific estimate, and still achieve clear shots. Closer than that, though, and the text became blurry.

Powering the OnePlus 7T is a Snapdragon 855+ processor, which is tuned to run at a higher clock speed than the 7's Snapdragon 855. There's also an improved graphics processor, so you might notice better performance when you're gaming. I haven't been able to compare the two devices side by side, but during my testing the OnePlus 7T had no trouble handling my YouTube binges or AR maps navigation. I haven't had enough time to fully test the 7T's battery life, but the 3,800mAh cell here has held up close to two days, which is impressive. The new Warp Charge 30T feature is said to be a tad faster, and it can fully charge this phone within an hour. 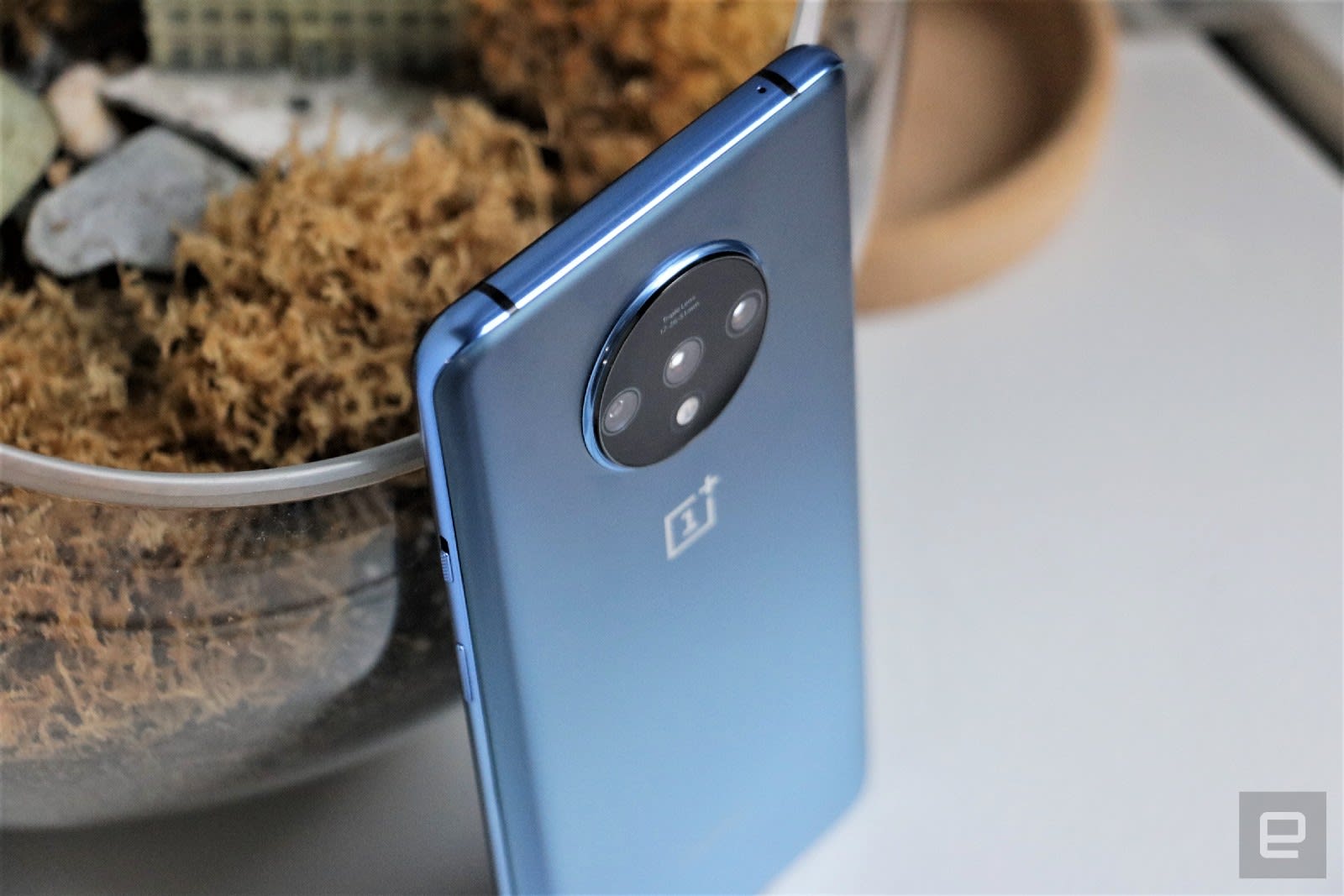 The OnePlus 7T is also one of the first phones that ships with Android 10. Technically, it runs the company's Oxygen OS on top of Google's latest platform, but it's an early glimpse at a manufacture-installed version of the software. Android 10's been publicly available for less than a month, and acquainting myself with the new gesture navigation took some learning. You can read my colleague Chris Velazco's review of Android 10 to learn more, but basically the new OS doesn't change anything dramatically. OnePlus added a Zen mode app that pretty much shuts the phone down for a set period of time so you can't even use it or turn it back on until the timer runs out. It's an extreme take on digital health and learning to disconnect, but could just be the nuclear method some need.

The OnePlus 7T is not only a meaningful upgrade from the OnePlus 7, but it's also just a well-rounded phone for the price. If you're looking for a powerful Android phone but are tired of the recent trend of $1,000+ phones, the OnePlus 7T might be a refreshing change of pace.